Three years ago we spent the entire month of February at home in south Florida. In reviewing over 1,000 photos I processed that month, I found many to illustrate favorite memes-- critters (especially birds), skyscapes, reflections, flowers, fences and scenes which speak for themselves.

Highlight of the month was the delayed arrival of two eaglets in the local Bald Eagle nest, the 17th and 18th known offspring produced at this nest. In the prior breeding season, the parents suffered loss of their first brood. Undaunted, they nested again and produced two more eaglets which hatched in March, 2016, almost three months later than normal.

Only one survived, and fledged in mid-June. It required the care and attention of the adults until mid-September. Normally, the eaglets would have been independent and migrating north by late May or early June. The demands placed upon the parents surely delayed their renovation of the nest and courtship.

The eaglets hatched respectively on or about February 5th and 8th. We were able to see and photograph the older eaglet for the first time on February 24: 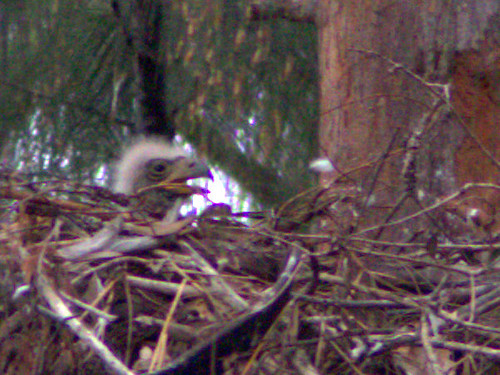 Three days later, both eaglets posed as their mother (Jewel) roosted next to the nest: 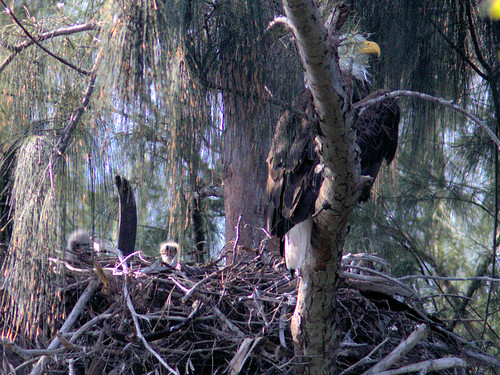 The elongated black object protruding up from the nest is the seed pod of the  Flamboyant Tree (Royal Poinciana). The leaves and seeds of this tree are toxic, containing cyanide and tannins. Some believe that the eagles deliberately collect them to deter nest parasites. However, these trees are common in the nearby residential areas and these branches may have been randomly selected. 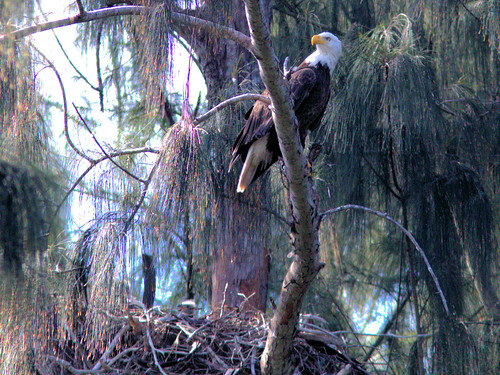 This is the male eagle (Pride) roosting nearby: 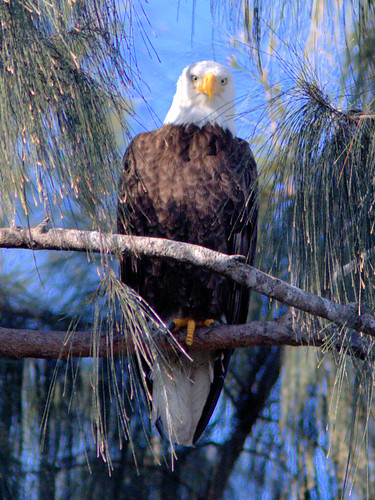 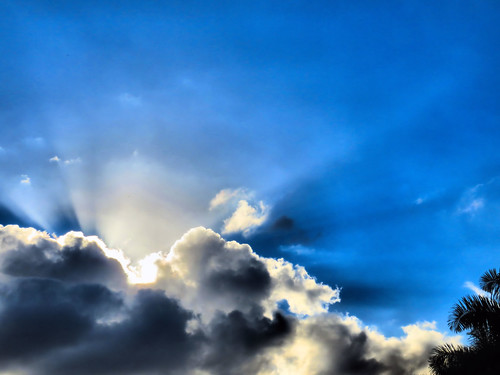 Any day when we see a male Painted Bunting is a great day. Sadly, many are trapped for the illegal pet trade: 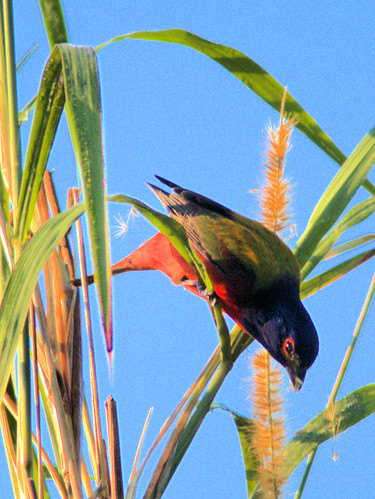 A perky squirrel perches on a fence: 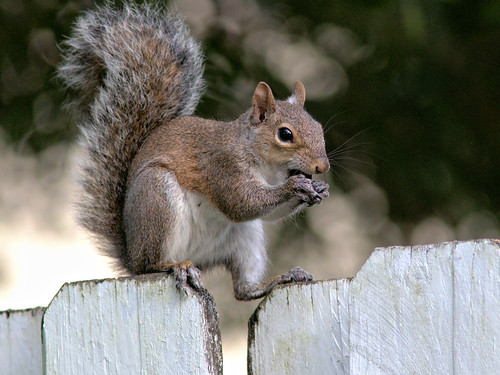 In the local rookery, a Yellow-crowned Night-Heron displayed to potential mates, although the females appeared to ignore him: 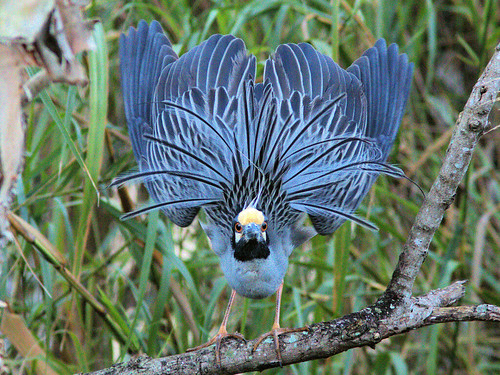 A Great Egret foraged on a foggy morning: 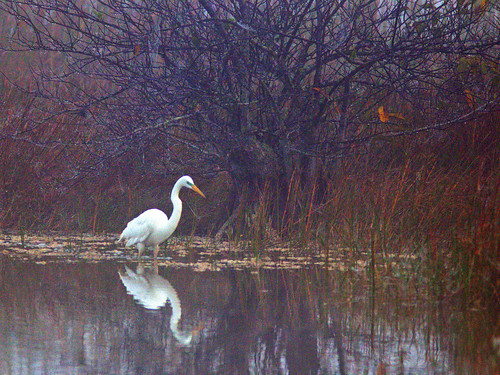 In the woodlands, we found a White-eyed Vireo... 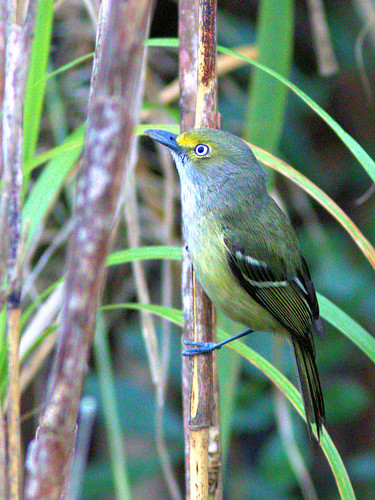 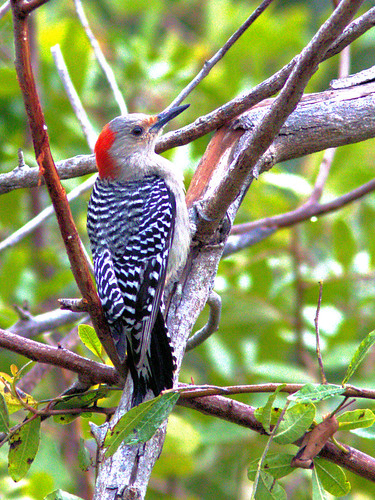 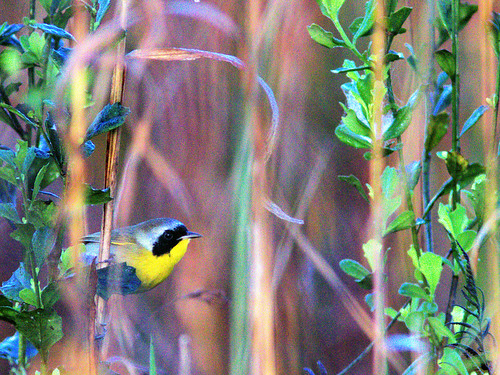 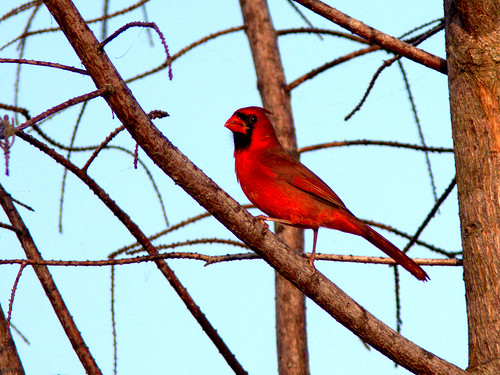 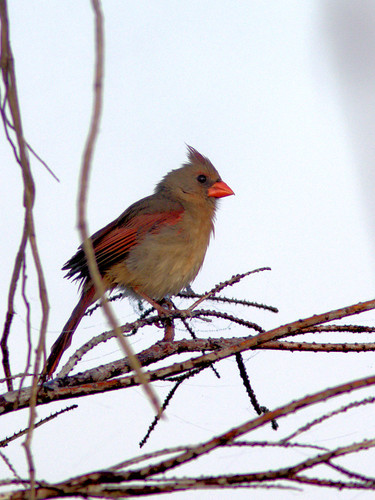 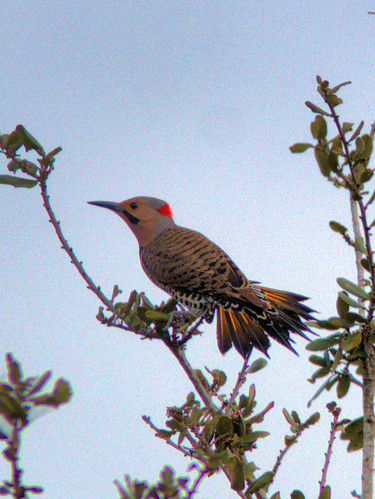 ...another flicker, golden in flight... 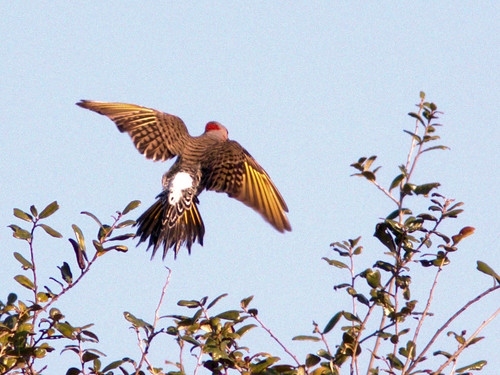 ...and a Northern Parula (warbler): 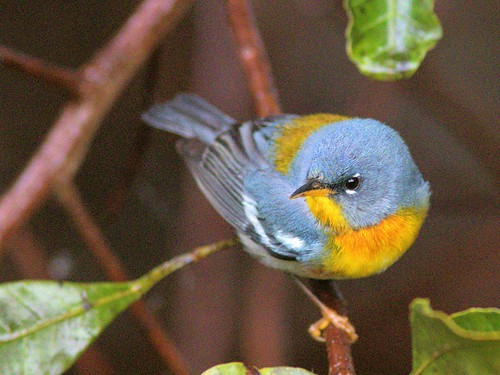 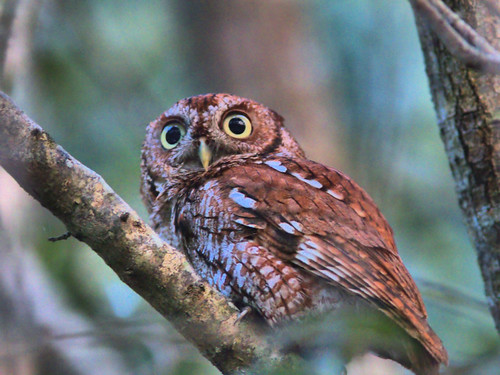 The Brazilian Pepper is an invasive exotic plant, but the birds love it and their droppings help to spread its seeds. Gray Catbird: 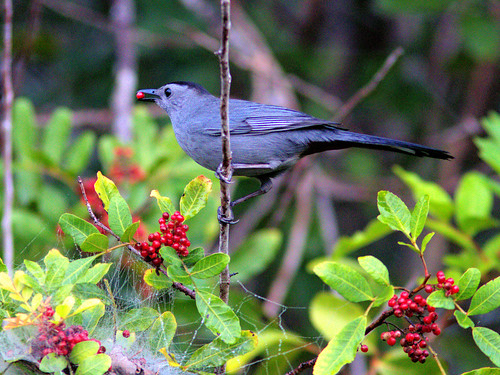 A Prairie Warbler is more interested in eating the insects attracted to the berries: 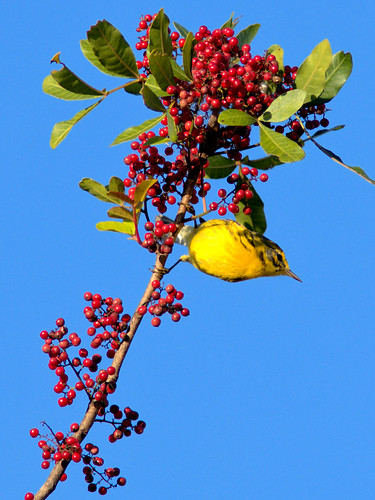 Royal Palms bear both male and female flowers. The spent male flower stems are in the foreground, and successively ripening crops of female buds and fruits are arrayed behind them. Look closely to see foraging Palm and Yellow-throated Warblers: 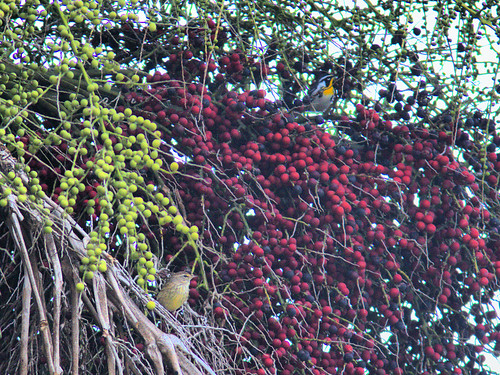 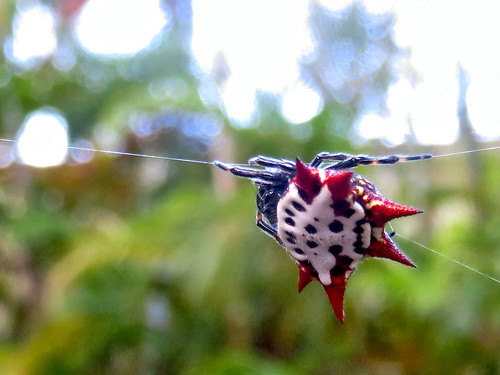 Along the path into the wetlands, sunrise and a crescent Moon: 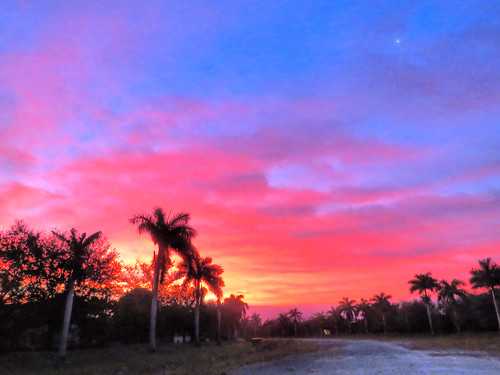 Wood Storks have newly occupied a rookery in Weston, a town about 10 miles to our north. I love to capture images as they glide in to join the flock: 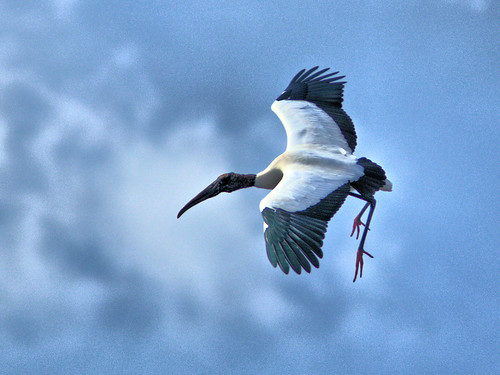 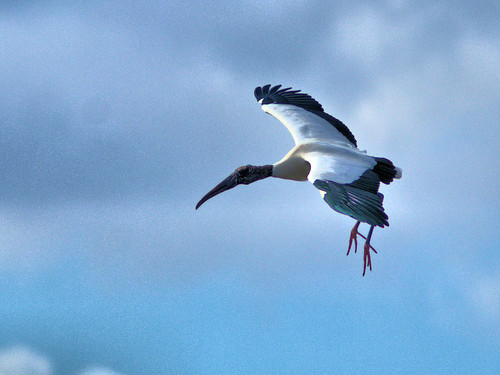 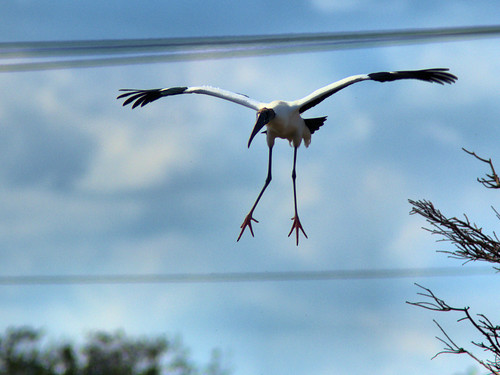 On the lake, a Great Blue Heron, 15 minutes before sunrise: 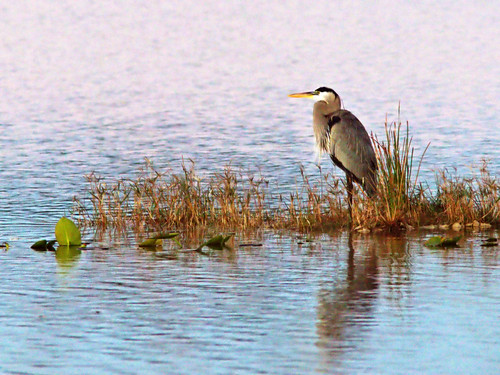 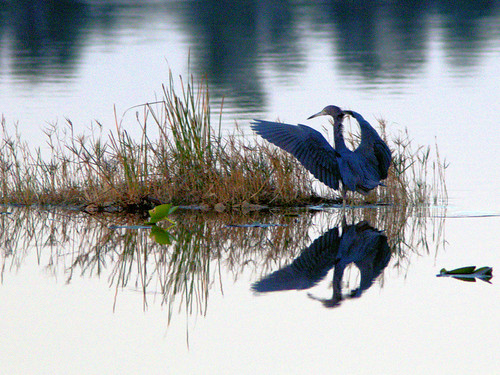 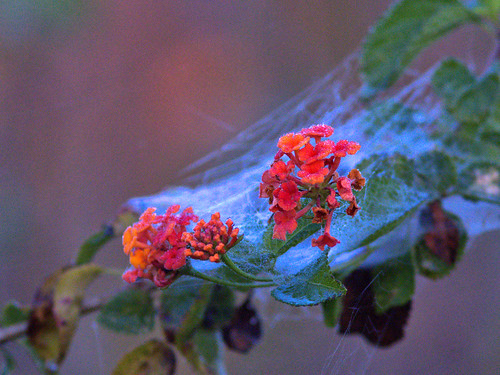 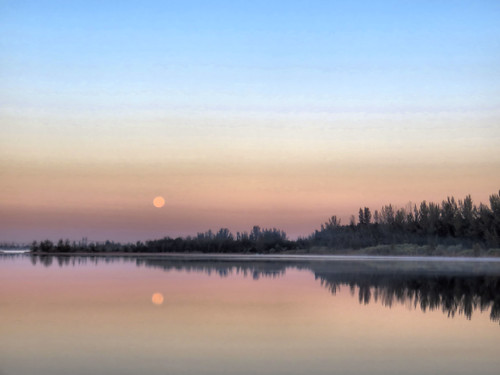