This week our walks in the local wetlands have been limited by a lingering tropical weather system, along with our need to continue sheltering in place, so I will mostly review some Osprey observations. For the past 4 years I have been watching an Osprey nest which is located high on a light array along a soccer field behind a supermarket about a mile away from our home.

I first noticed it on May 27, 2016. It contained one half-grown chick. One of the parents (likely the female which usually tends to the young) accompanied it in the nest: 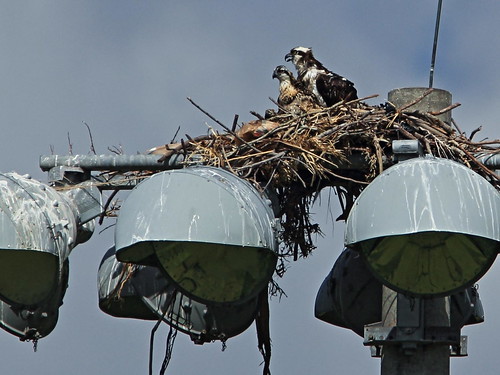 The other adult stood watch on another light standard nearby: 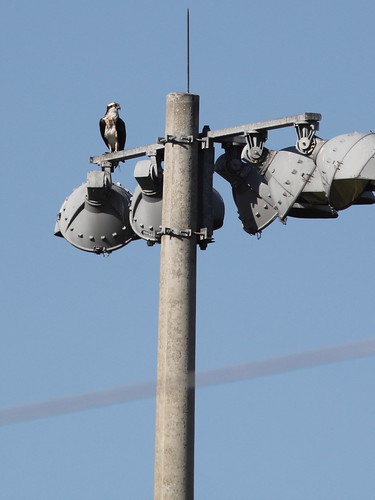 I then returned to our second home in Illinois and never learned whether the young Osprey successfully fledged. I next photographed the nest on February 25, 2018. It was much more substantial. An adult posed on it: 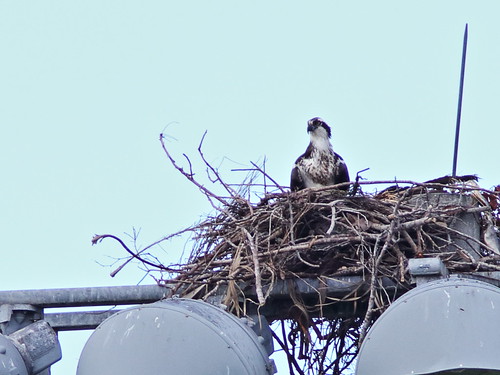 On April 10, 2018 an adult was barely visible roosting high on the nearest pole. The nest is on the one behind it in the center of the four pitches (click on image to enlarge). The Ospreys did not seem to be disturbed by the soccer players and spectators. The next two years they chose to nest on the more distant pole in the far right corner of the field: 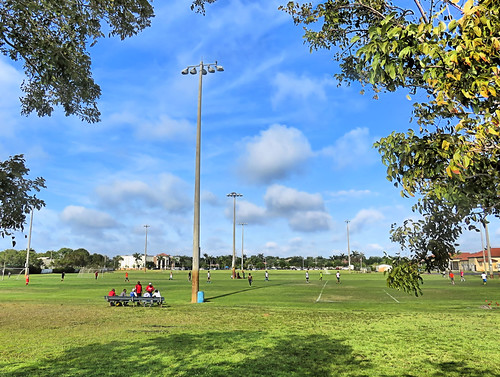 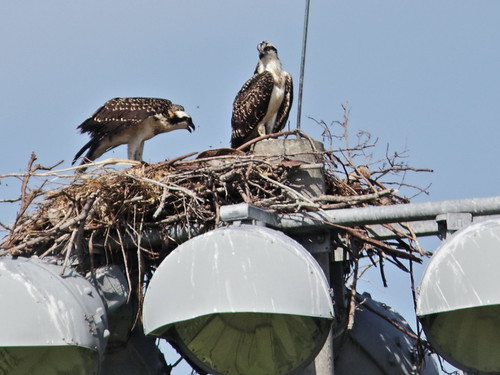 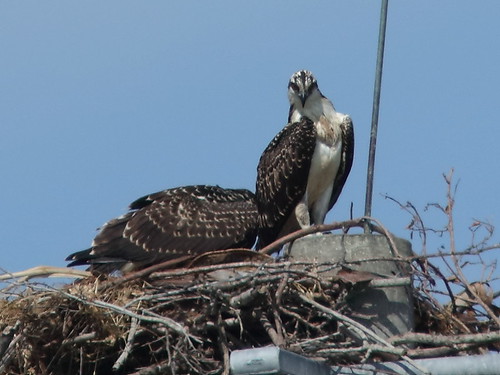 During the 2018-2019 breeding season, the Ospreys started working on the nest during the winter. One adult rested in it on January 26, 2019: 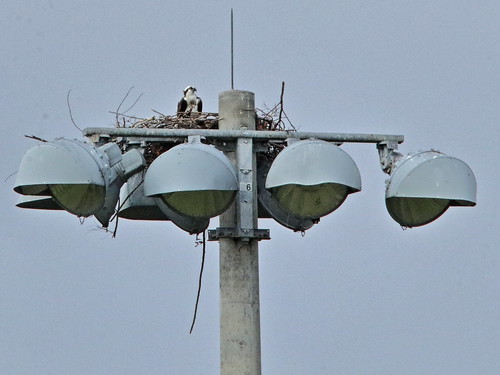 They appeared to be incubating eggs by March 16, 2019.  Ospreys normally lay three eggs. Since their incubation period varies from 34-40 days, they may have had another week or two to go when I took this photo of an adult deep in the nest on April 14, 2019: 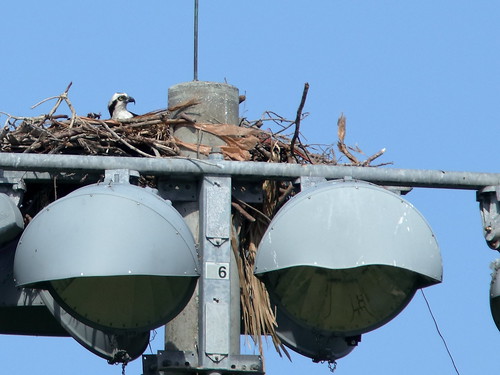 I often checked the nest when I drove by, but could only see the head of an adult which I assumed was either incubating or brooding small chicks. Then, on May 18 the scene was a bit disturbing. One adult, preumably the female, was standing up in the nest and loudly calling repeatedly as if excited or disturbed. By now the chicks should have been visible, but I watched carefully and never saw any: 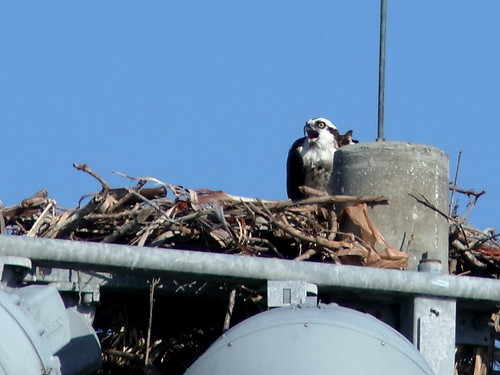 Was this adult bird begging to be fed, or was this a cry of distress? The other adult was eating a fish atop on adjacent light pole and seemed to ignore the incessant screaming. From that day on the nest appeared to have been abandoned: 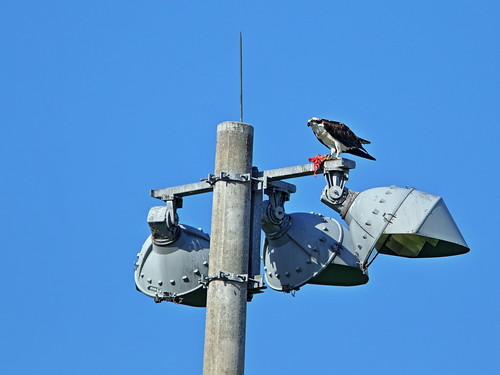 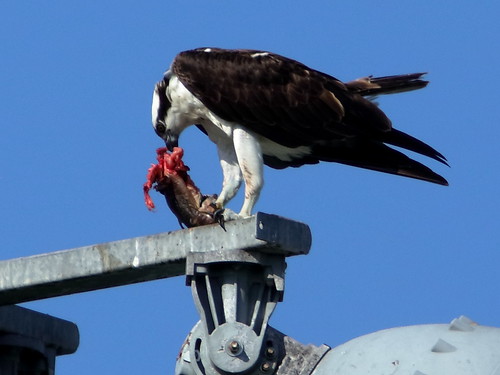 After that I stopped by and twice found no Ospreys at all, and the nest was always unoccupied. Then, on May 28 I found the two adults huddled together on one of the light poles. I never found out what had happened to their offspring. 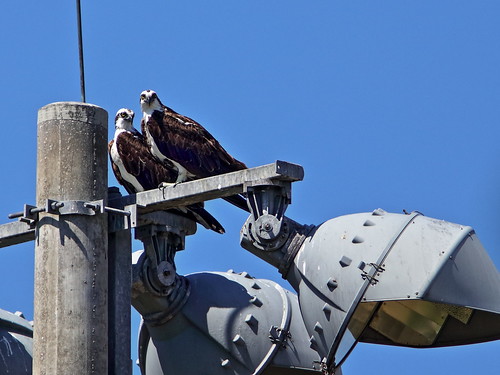 The nest platform is actually a large array of lights which can be lowered to the ground in order to service them. When hurricanes threaten or it undergoes maintenance, the entire array is lowered. Of course this destroys the nest and they must rebuild it every year.

This season the nest was completed and  incubation was underway by March 2020: 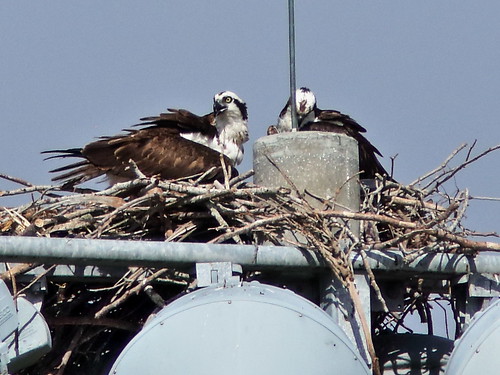 A single chick was ready to take flight in late May. Note that it has a speckled back and wings: 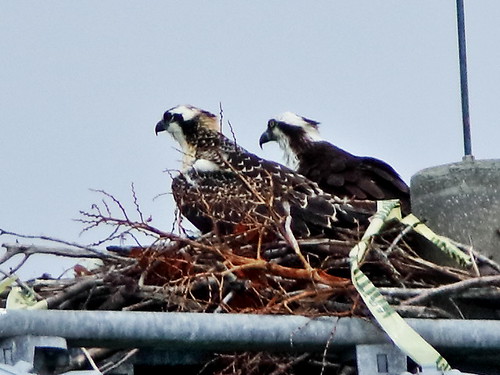 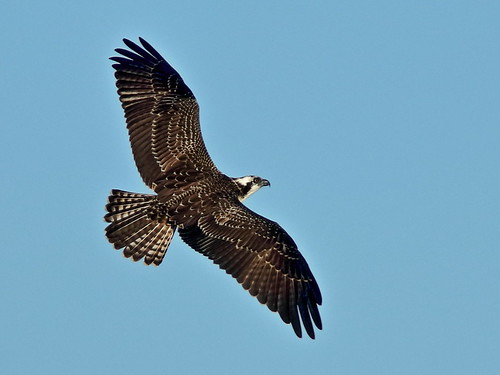 In our back yard, the Muscovy Duck which hatched out 15 ducklings last week is now down to only 7. Mortality is very high. Often none of the brood survives: 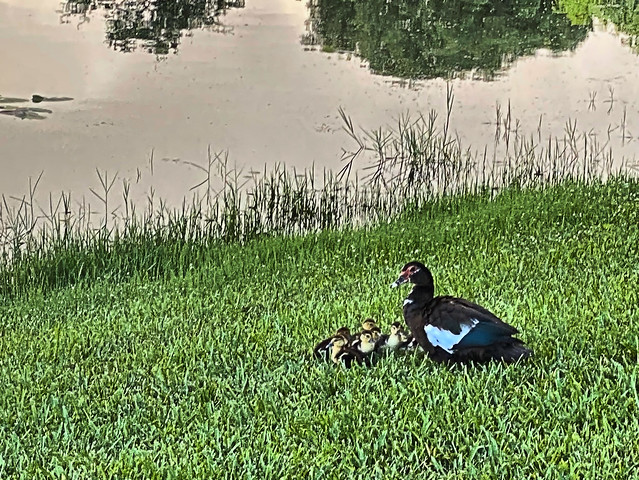 Yesterday the seven ducklings followed her along the lake shore during a storm. I obtained this photo of them through the rain-soaked window: 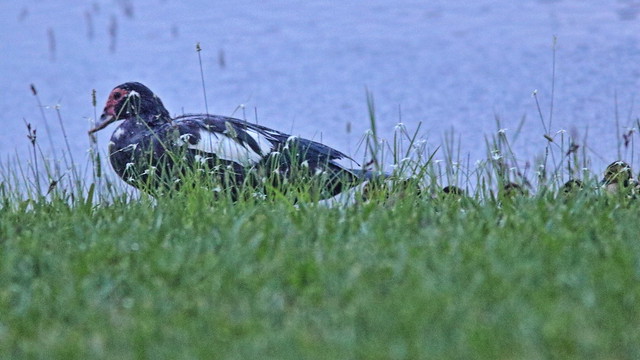 A little later, after the skies had cleared, I walked out on the patio and was surprised to see yet another Muscovy hen emerge from under the same Cocoplum bush with 8 newly-hatched offspring: 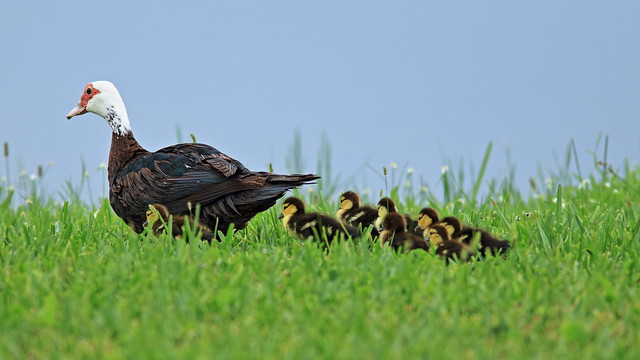 These are her eight hatchlings. Note that one is dark overall and may likely more closely resemble the wild stock: 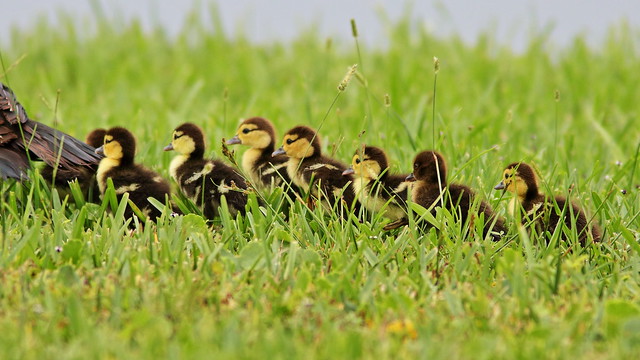 The tops of storms moving in over the Atlantic Ocean broke the sunlight into shadows which converged over the Everglades to the west, producing an array of anti-solar (anti-crepuscular) sunbeams. The "mirrored sunrise" reflected on the lake's placid surface: 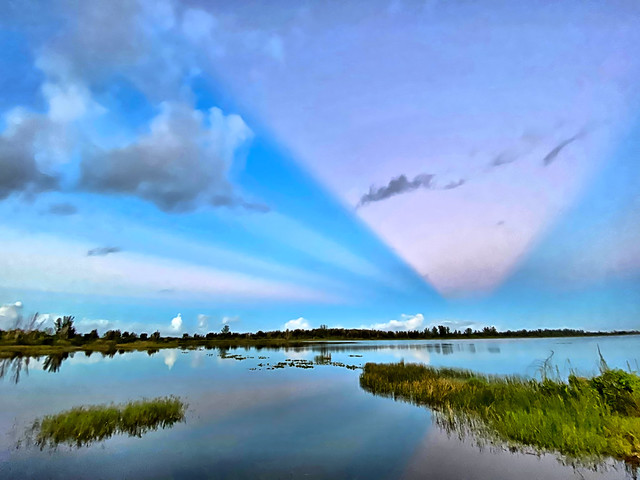 Threatening skies to the east moved in just after sunrise: 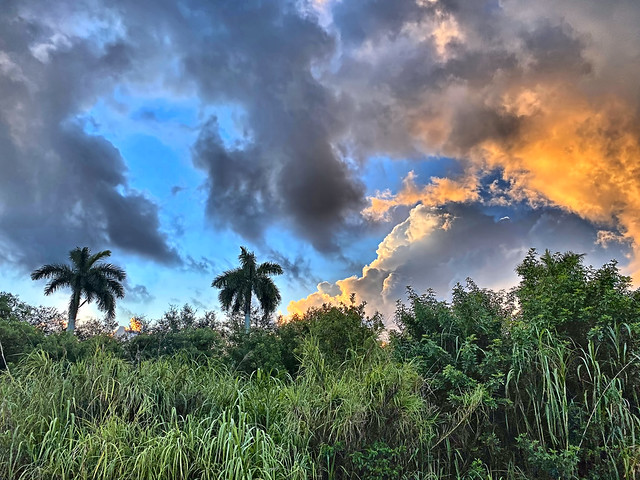 We hurried home, ahead of the menacing storm: 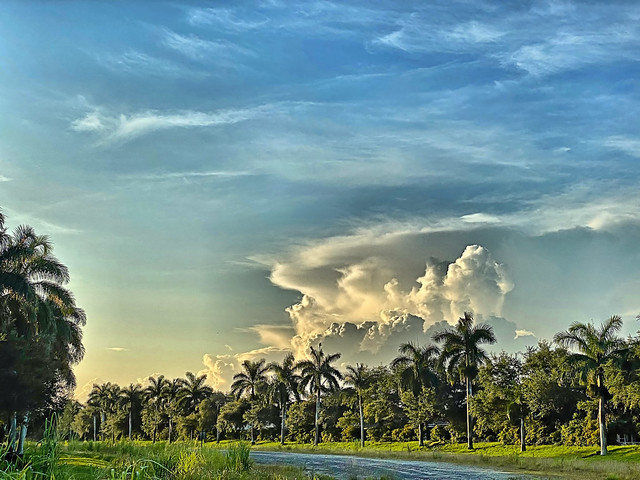 Posted by Kenneth Cole Schneider at 11:54 AM

Email ThisBlogThis!Share to TwitterShare to FacebookShare to Pinterest
Labels: Osprey