I must admit that during the winter I'm always looking for snipe in our local South Florida birding patch. Up until now I had only gotten fleeting glimpses of single birds, usually flying away from almost underfoot at breakneck speed. Taken from a distance in poor light, this photo shows the characteristic shape and bold vertical markings on the sides of the breast of a Wilson's Snipe. 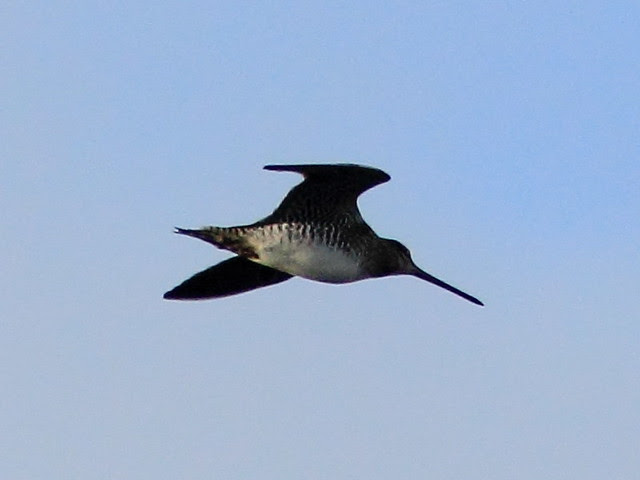 I came to believe that there is no such creature as a snipe that sits in one place and poses for the camera. So frustrating. Was I being victimized?

As a Boy Scout tenderfoot, I learned the hard way about "snipe hunts."


A North American prank and rite of passage wherein older adolescents take younger boys into the wilderness for the supposed purpose of “snipe hunting.” Snipes are an imaginary game bird purported to resemble quails or pheasants or what have you (the fictional snipe is not to be confused with the extant North American shorebird of that same name). Snipe hunts take place on moonless nights; the victims are provided burlap bags with which to catch the birds, while the conspirators spot them with flashlights. The conspirators make birdcalls, through rocks in the bushes, and urgently cry out “snipe” to make the victims believe that there are actually birds in the area. The victims don’t want to be the only one who can’t see the imaginary birds, so they claim to have seen them also. Pretty soon the victims have convinced each other they are surrounded by snipes and proceed to run about foolishly in search of the non-existent birds.


A recent encounter resulted in my first photo of one on the ground in our patch. I had flushed it while walking out on a small peninsula. It flew some 50 yards to an area of shoreline that was rimmed by high grasses. There had been no time for a photo, and I scanned with binoculars but could not find the bird. I took a single photo of the area where it landed, just to remember the experience. Back home I displayed it on the computer screen. 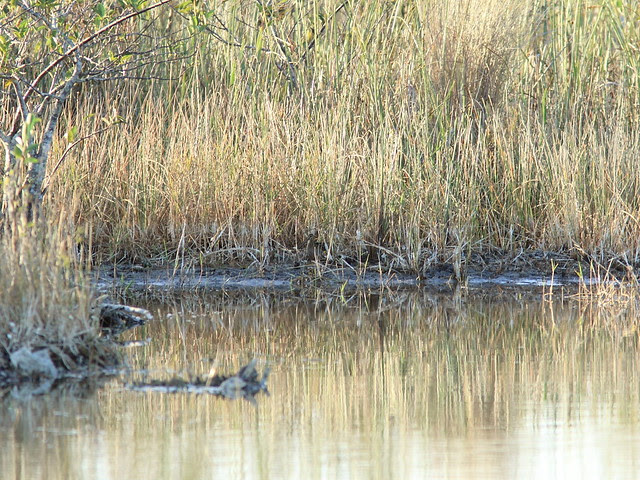 Look closely at the enlarged image, and note how its cryptic plumage blends with the background. 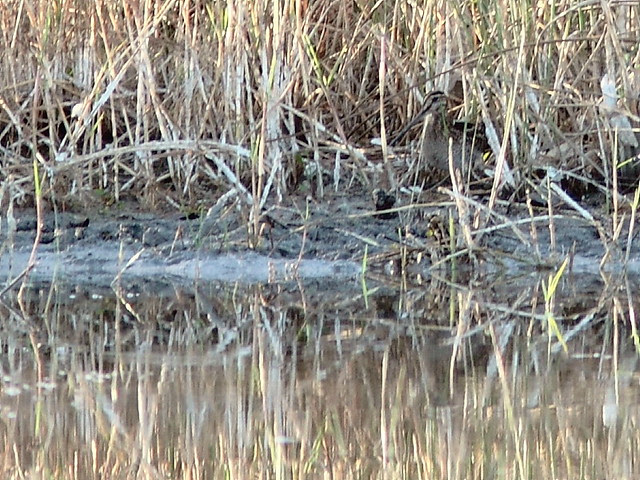 Not a very satisfying record, but I added it to my collection of bird species photgraphed on my patch. This past week my luck changed. My "burlap bag" is now full and brimming!

One morning last week Mary Lou and I set out into our local wetlands patch about 15 minutes before sunrise. It was overcast at first, and darker than usual. As we passed along the lake, I caught movement at the near shore. The silouhette of a bird contrasted with the soft glare of the water's surface.

Despite having the ISO cranked up to 3200, I obtained only a grainy image of the bird's head, but its markings confirmed that it was a snipe! While Mary Lou continued her "power walk" another mile into the wetlands area, I remained at the spot, waiting for better light. On her way back she stopped for a while, but the bird had hardly moved and was hidden in the vegetation.

Finally my patience was rewarded. After almost an hour of getting only tantalizing shadows, a snipe walked out into the open, acting as if I were not even there! 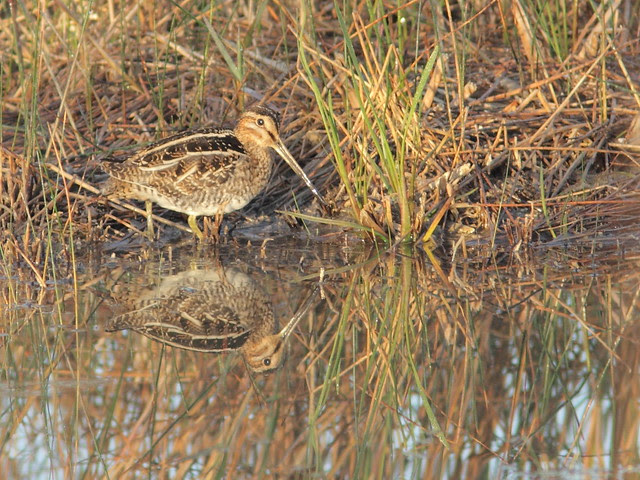 It walked out into the water... 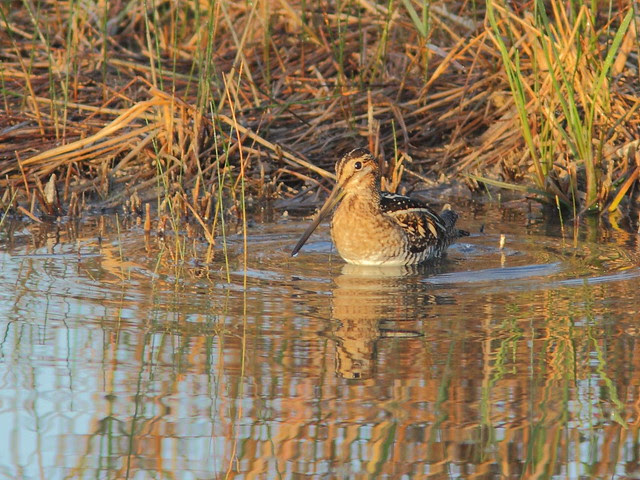 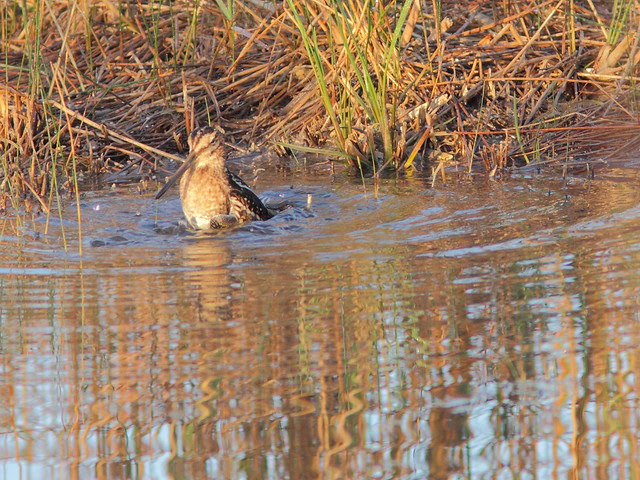 ...and preened its feathers. 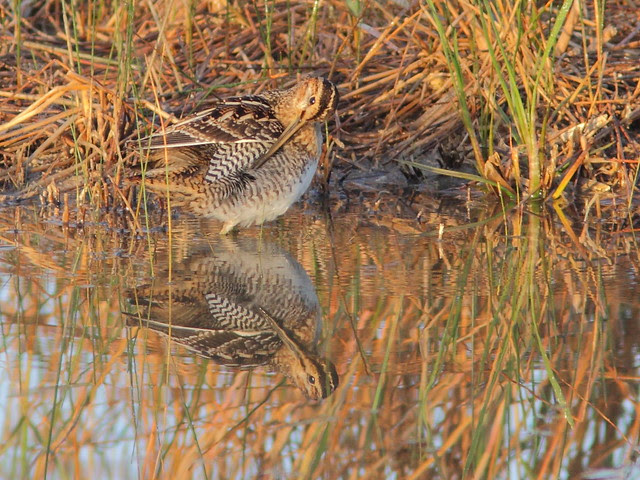 To my surprise, three more snipes appeared, as if out of nowhere. 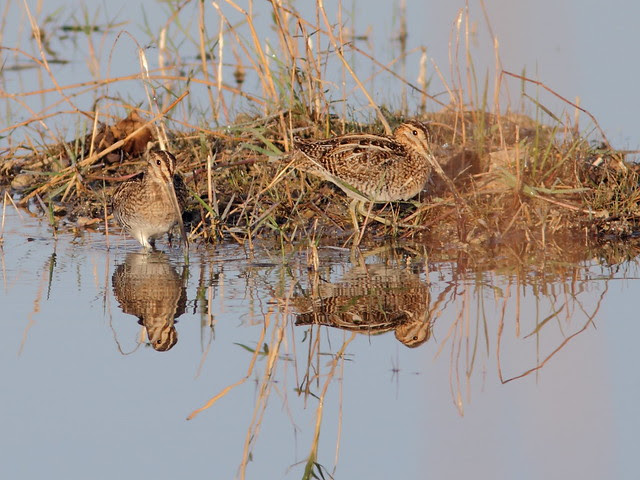 This short video illustrates the feeding behavior of the Wilson's Snipes.