On a stormy morning, a sunbeam seems to be directed at the entrance gate to our local birding patch (click for enlarged view of the fence): 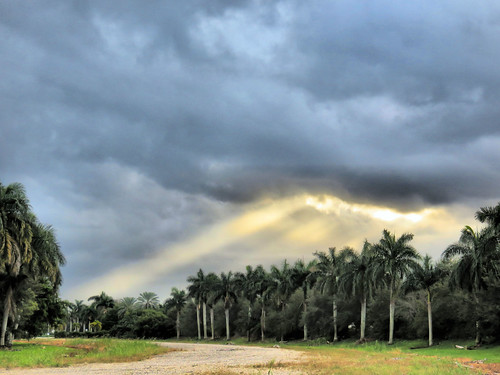 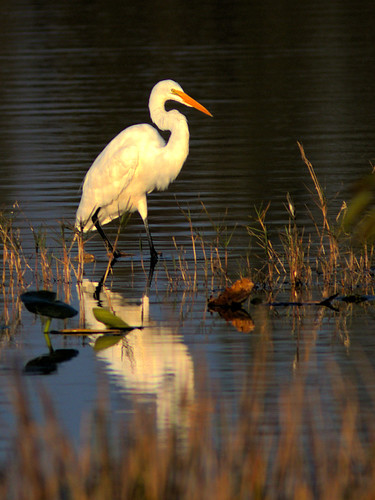 A Zebra heliconian sips nectar from a Lantana blossom: 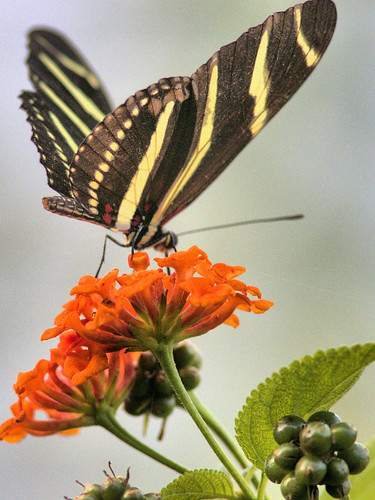 When I first moved to south Florida I saw a hawk soaring over our home. Its wings were broad and its body was stocky, so I recognized it as a member of the Buteo (Buzzard) group. It had a reddish tail. Our only Buteo with a red tail is the Red-tailed Hawk, but this bird was smaller and its wings did not look right. I realized that this was my first sighting of a Short-tailed Hawk. I did not have my camera but subsequently saw another with a reddish tail. Admittedly it does not show up here as well as it did in life: 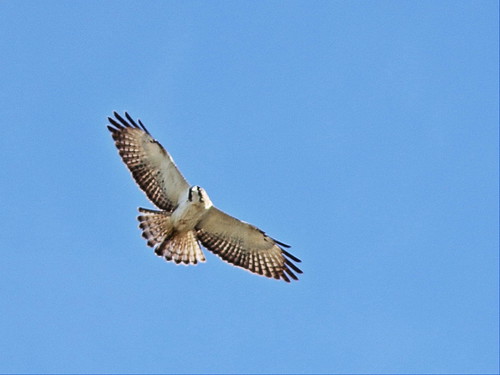 Contrast the above hawk with this immature eastern Red-tailed Hawk which I photographed in Illinois. Note its longer wings with dark patagial markings (referring to the patagium, which is the fold of skin extending from the body to the "wrists") on their leading edge at the "elbows:" 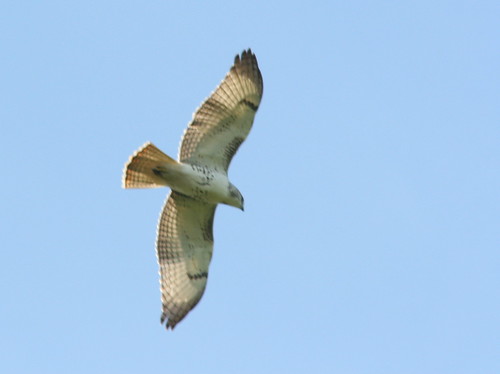 Adult Red-tailed Hawks usually have much more red pigment in their tails. The red in the tail of the hawk I saw in Florida was not due to pigment, but to diffraction of light in its tail feathers. Although the field guides no not give this much attention, it is a rather commonly seen in Short-tailed Hawks. 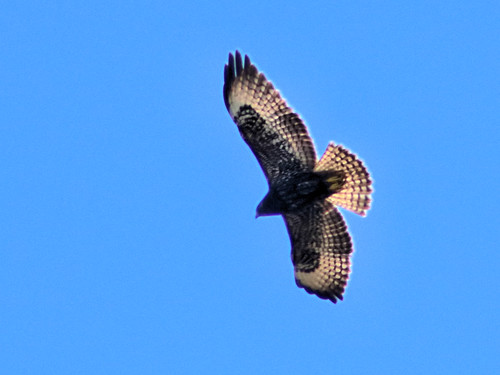 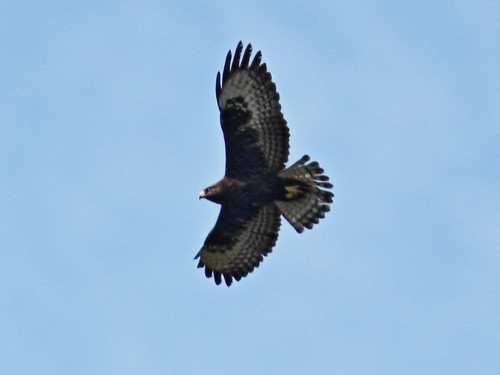 This is a light morph photographed on Feb 22, 2016. Note its torpedo-shaped body: 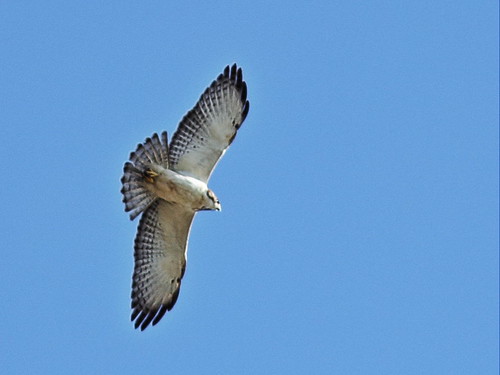 The Cornell Lab of Ornithology in Birds of North America describes this species as "one of the rarest and least-studied birds in the United States." Although fairly common in Central and northern South America as well as on both coasts of Mexico, its breeding range in the United States is restricted to the Florida peninsula, with an isolated population of 150 to 200 pairs. These birds spend the winter in the southern tip of Florida. As can be noted in the above photos, their tails are not short in proportion to their bodies.

Both morphs interbreed, but the dark form is said to be more common in Florida. It rarely roosts out in the open. Recently I was lucky to find individuals of both color morphs roosting along the road in our local wetlands. 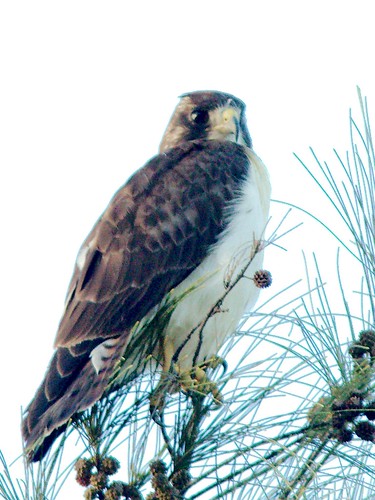 The dark morph Short-tailed Hawk did not provide me with a very open view. It was facing away and partly obscured by foliage. (Dec 31, 2016) 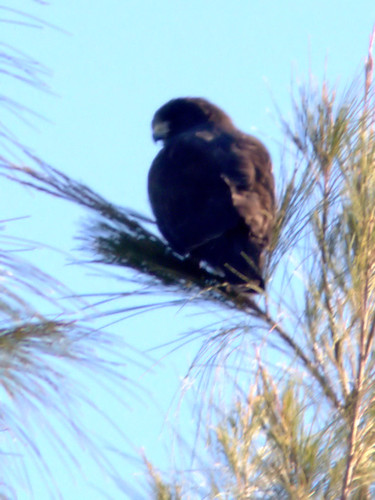 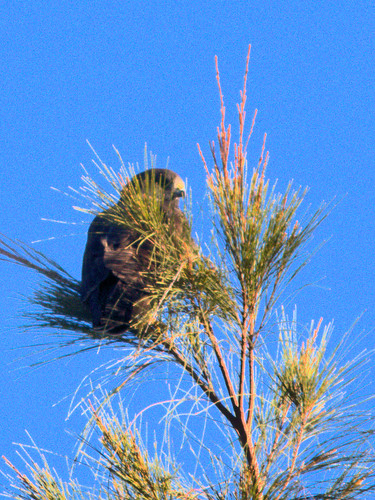 However, before it roosted, the latter hawk flew right over my head. It approached on long glide with wings held horizontally, unlike the dihedral of the vultures with which it often associates: 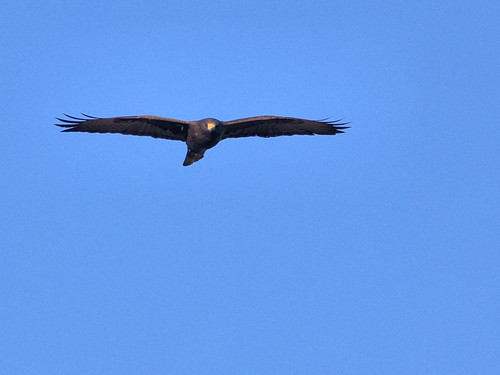 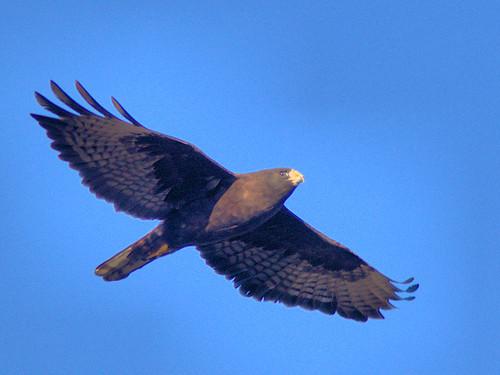 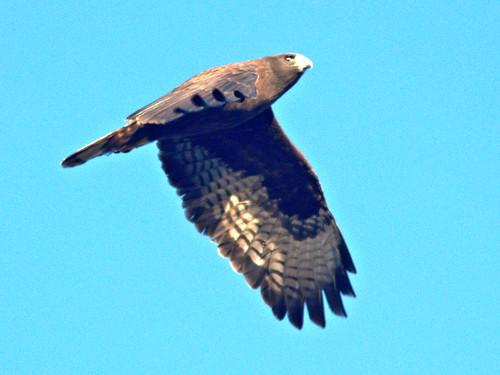 Short-tailed Hawk prey almost exclusively on small and medium-sized birds. They have a habit of hovering in place and then suddenly diving straight down with closed wings. I was able to capture the image of this dark morph as it hovered, but It then dropped so fast that I missed the dive: 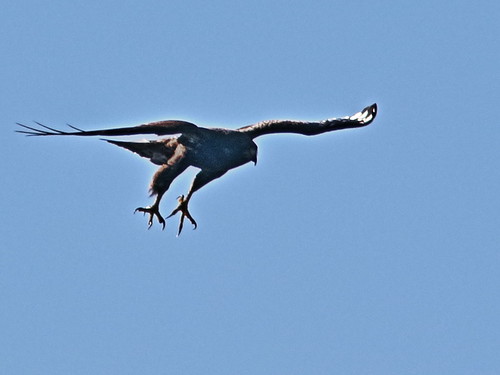 This light morph hovered and as I clicked the camera it started to drop like a stone. Luckily, I got a single frame as it descended and disappeared: 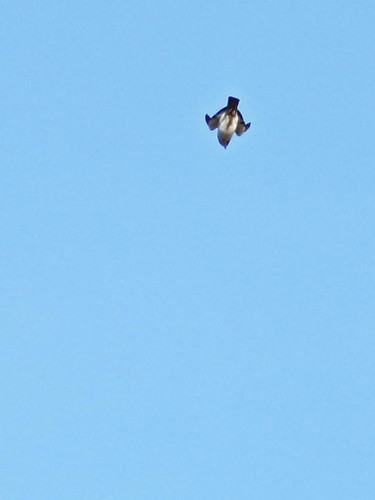 Still feeling time pressures as Mary Lou will have her second cataract extraction today. After her first surgery she somehow injured her back and has needed assistance. In the meantime we had just learned that our next door neighbor was diagnosed with pancreatic cancer which had already spread to his liver when discovered just before Christmas. He was only 48 years old and had a beautiful wife and two young sons (I published a photo of one of them last week paddling the kayak with their Labradoodle puppy in our lake) He passed away this past week. Their extensive family from Argentina is here and we have opened our home to them. Hope to get back to normal as soon as possible. Luckily had this post prepared ahead of time.

Linking to GOOD FENCES by Gosia

Linking to BirdD'Pot by Anni

Linking to Wordless Wednesday (on Tuesday) by NC Sue

Linking to ALL SEASONS by Jesh