Many of my sightings on early morning walks have been of far-off subjects. My photos reflect the effects of distance and poor lighting, as well as the fact that furry and feathered creatures are not accustomed to the human presence out in the wetland preserve. Yet, I was able to capture some nice closeups of butterflies and dragonflies.

Morning rain showers and thunderstorms have reduced our already limited time outdoors due to our need to avoid the stress of daytime heat along with pandemic-induced isolation. Plans and family hotel reservations for our flight back to Illinois for our granddaughter Carina's Quinceañera celebration (and a small family reunion for our 60th Wedding Anniversary which happens to be today, June 11) had to be postponed until mid-July, then moved again into September. Even that date is surrounded by uncertainty. Needless to say, Carina is not happy about Corona!

Before sunrise, a  Spotted Sandpiper startled me by flying up from the shore and landing on a faraway rock formation: 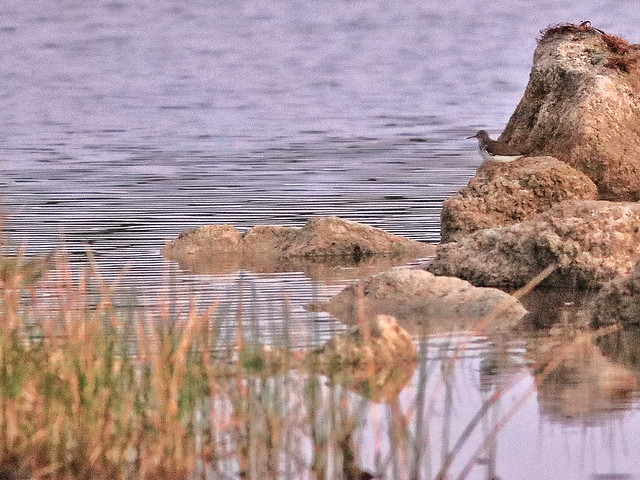 A male Belted Kingfisher would just not let me get any nearer: 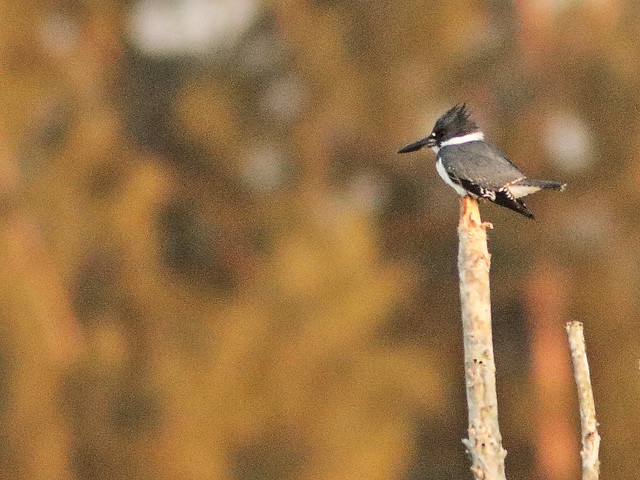 Another lakeside loafer was a Green Heron, but it would have nothing to do with me and flew off in the distance: 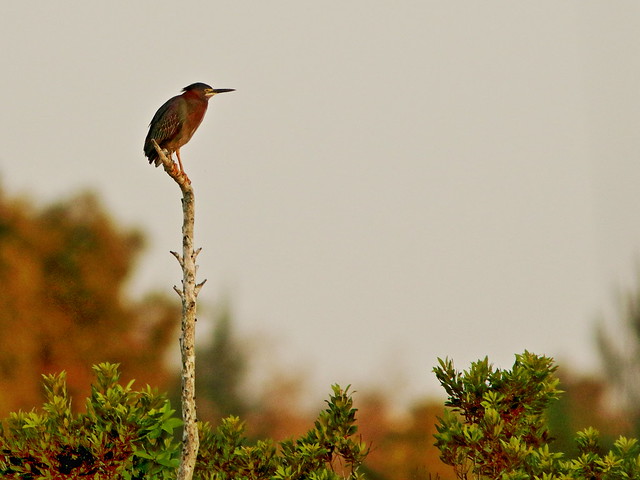 Bright sun and shadows took away much of what was left of this Little Blue Heron on a big blue sky: 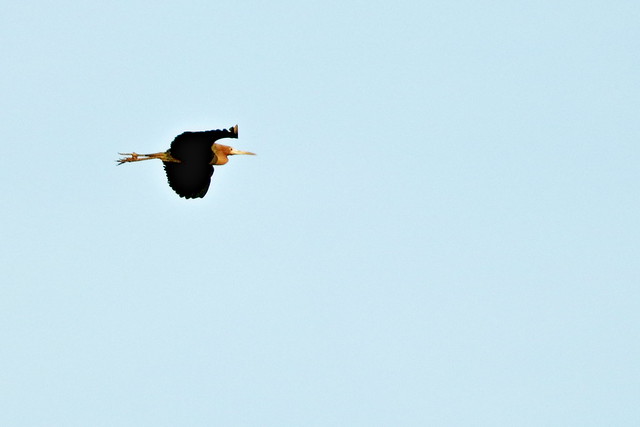 The previous morning, the male Bald Eagle from the nearby nest set off to go fishing at sunup. He flew right over my head from behind and it took me too long to get him into good focus: 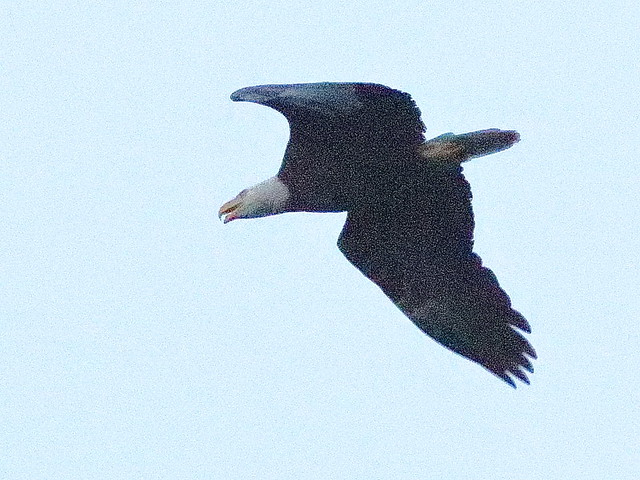 A Northern Cardinal sang from a distant perch: 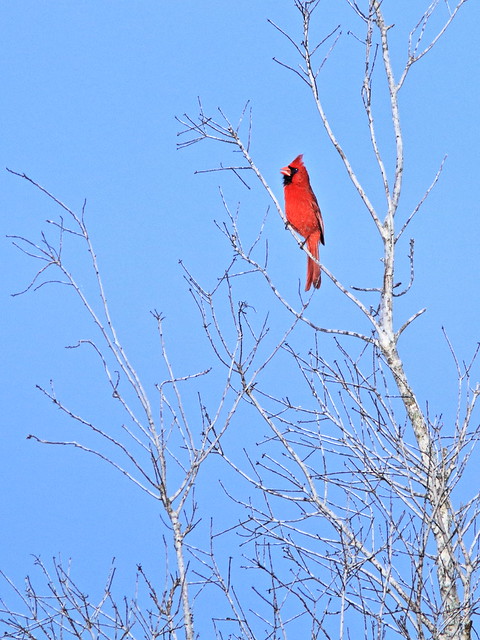 Can you even see the Great Crested Flycatcher? 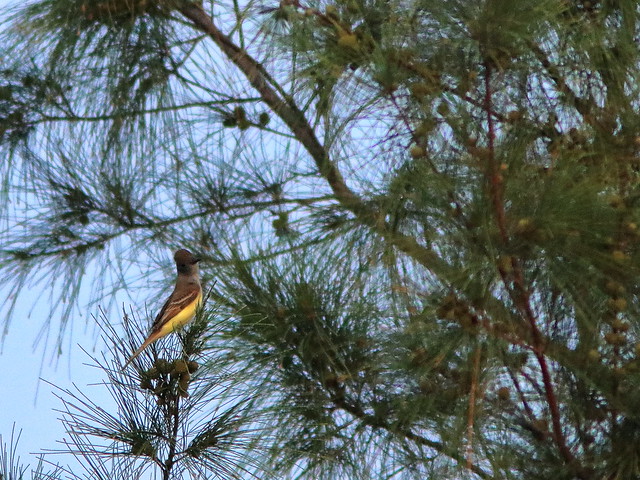 I chased him down... 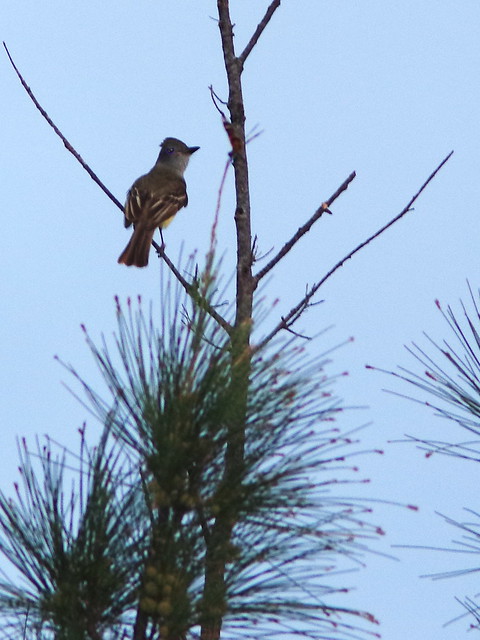 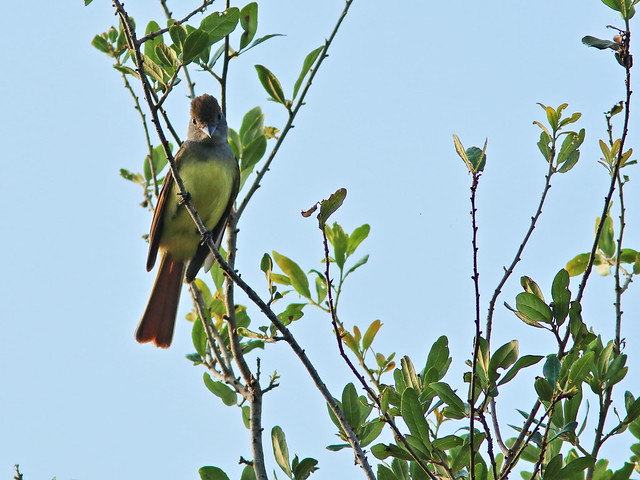 A big male Bobcat decided to cross the road long after I had passed  by. He obviously spotted me and watched... 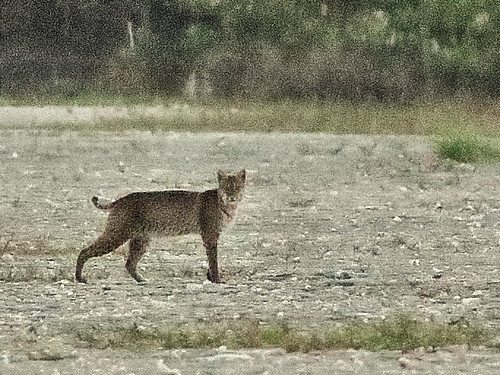 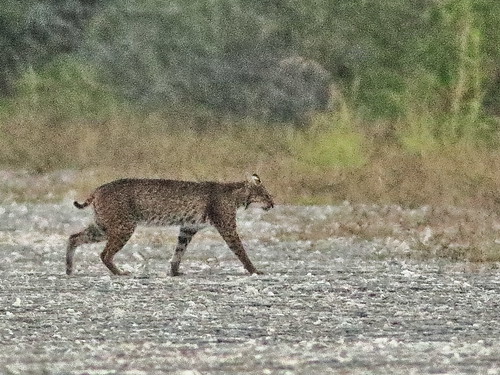 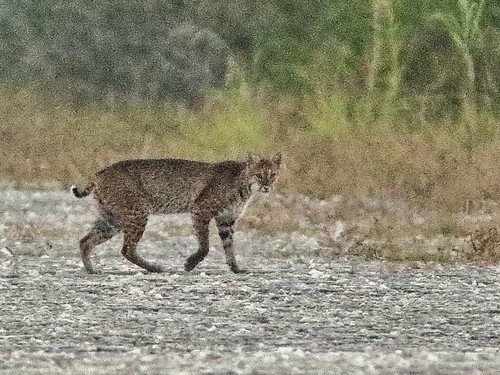 Back in April I was not even searching for it, but a male Black-throated Blue Warbler was so busy fluffing and preening that he seemed not to see me. With the subject deep in a thicket, my auto-focus was confused by the intervening branches: 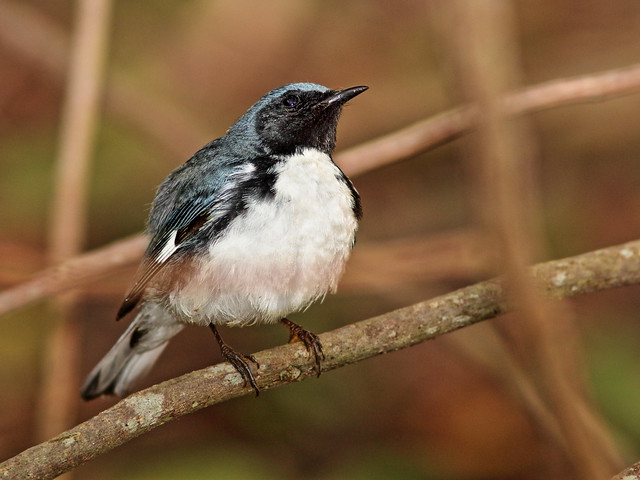 To cut my losses, I settled for a simple portrait and left  the rest of the pixels on the cutting room floor: 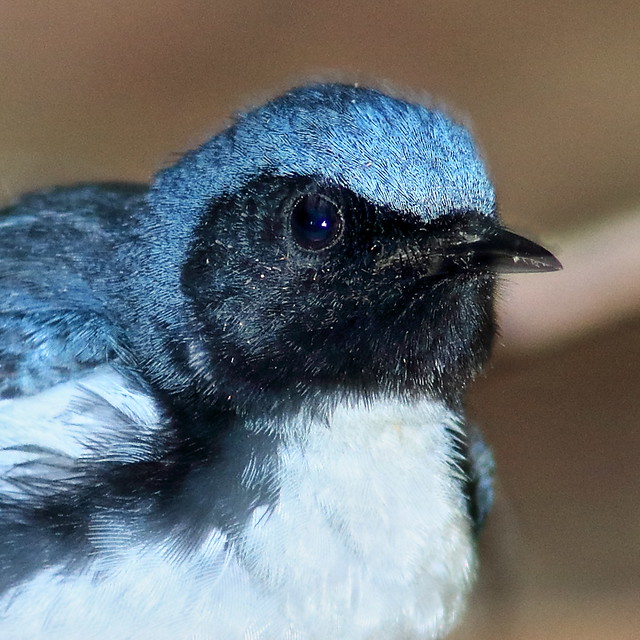 I squeaked with my lips to make this Eastern Screech-Owl poke his head out of its woodpecker-hole bedroom. It was quite far away and the Sun was just rising: 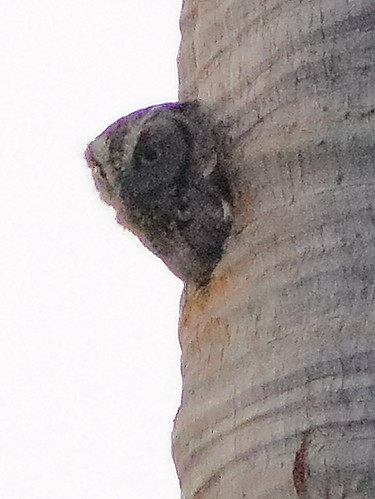 Shooting through our back yard window, I saw that this Tricolored Heron's feet were about to disappear as it descended to the lake shore... Time for one last whole-body shot... 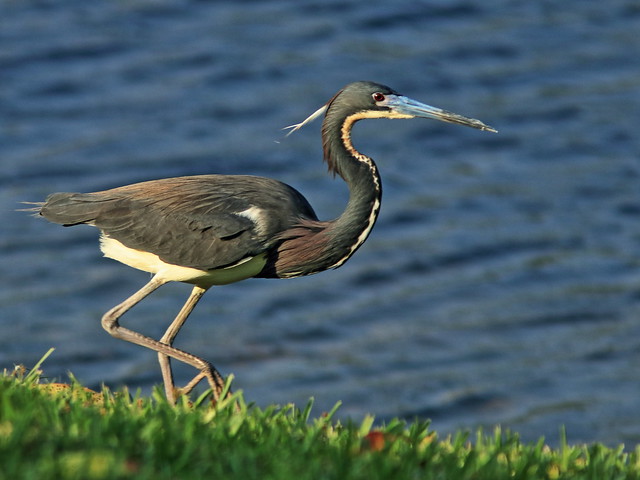 ...and back to portrait mode before it dropped out of sight. Its bright blue bill indicates it is in breeding condition: 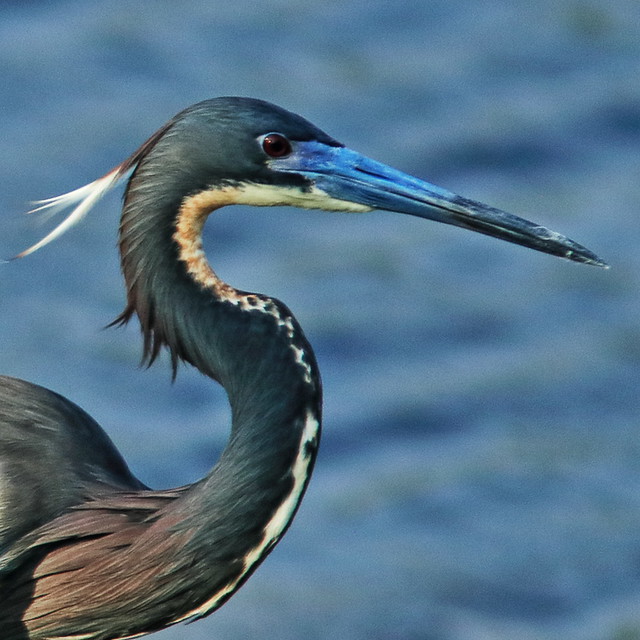 Two Mottled Ducks left a long wake while they crossed the canal as the morning fog dissipated. The Wounded Wetlands are on the right, and the look-alike fences of my neighbors are lined up along the opposite bank: 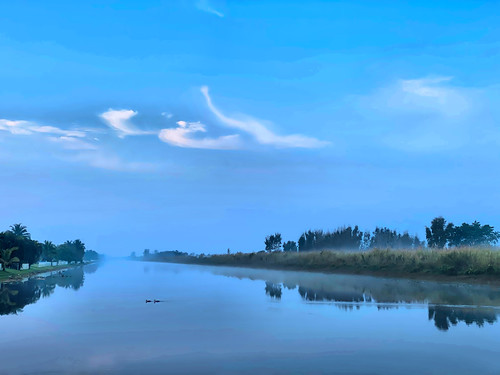 Some bugs were nice to me, such as these dragonflies.

A Needham's Skimmer shows amber in its wings: 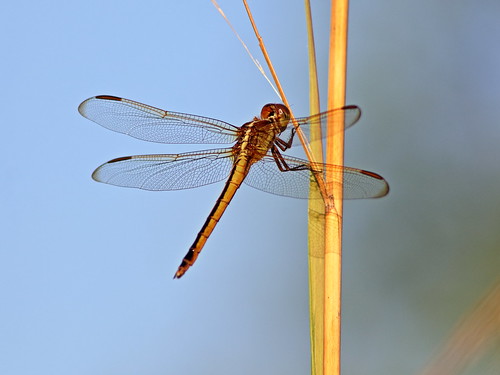 The Blue Dasher is small and inconspicuous... 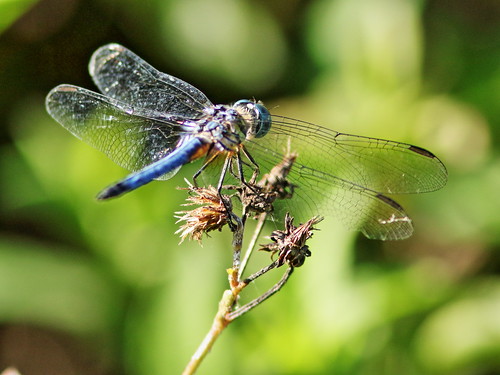 ...while the Halloween Pennant displays its orange and brown wing markings, earning its name by perching like a flag on a tall stem: 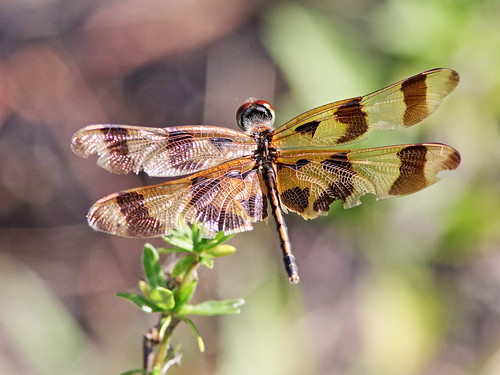 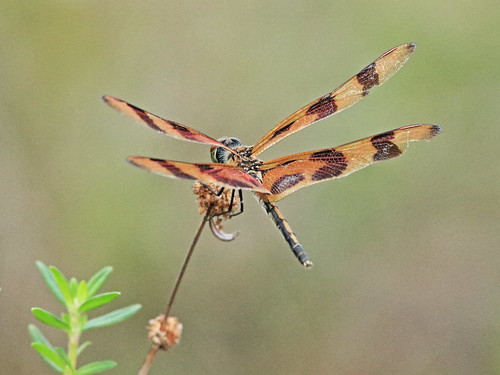 I cannot pass up a photo session with a White Peacock. It is probably newly emerged, as its wings will quickly be damaged in the competition for mates: 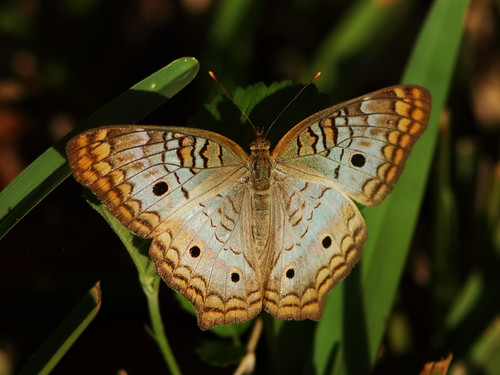 Snow on a summer-like day in south Florida? 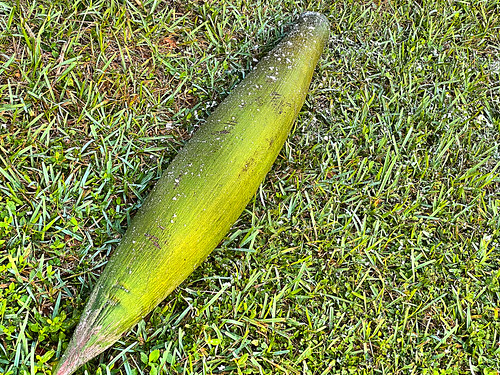 No, these are the tiny spent petals of the male flowers of the Royal Palm. The green female flowers are clustered on either side of the fragrant male plumes, So many bees can be attracted that sometimes it sounds as if an electric motor is humming overhead: 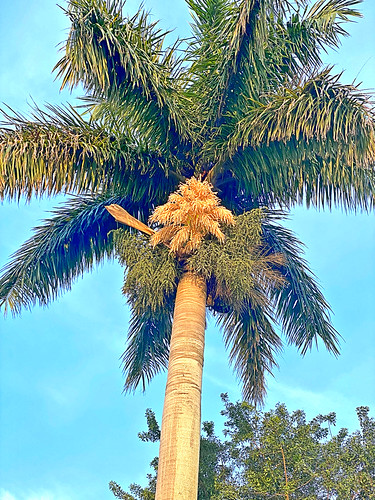 The smooth green object on the ground is the capsular shaft, the petiole or "boot" which falls off each flower as it matures. The older lower leaves also are shed, leaving a ring of scars on the trunk of the ever-growing tree. Like the internal growth rings of woody trees, the spacing of the rings and the diameter of the trunk reflect the good and bad seasons: 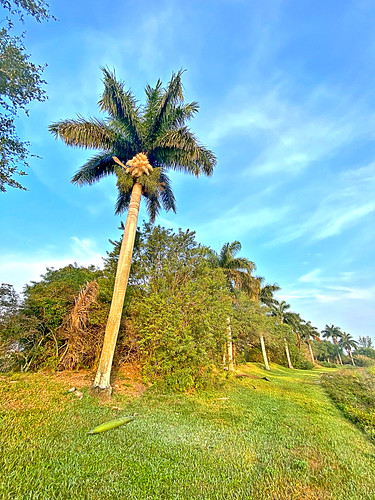 Our city has never had measurable snowfall, but here is an example of "Florida Snow" around the base of a Royal Palm: 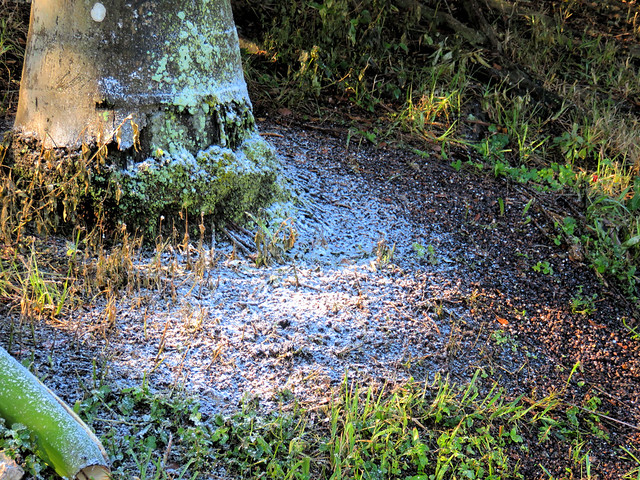 On June 8th the planets Jupiter and Saturn lined up with the full Strawberry Moon. As my most distant subject of the month, this image was produced by my iPhone 11 Pro Max: 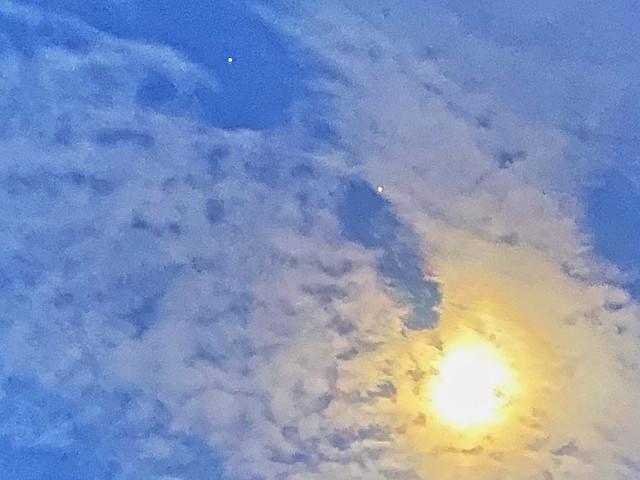 MaryLou had hand surgery yesterday, so she is celebrating our Anniversary with  a big bulky bandage on her right hand. As her "Right-hand Man" I cooked her favorite breakfast this morning but will not be able to focus her binoculars. Can't believe that June 11 1960 was so long ago! 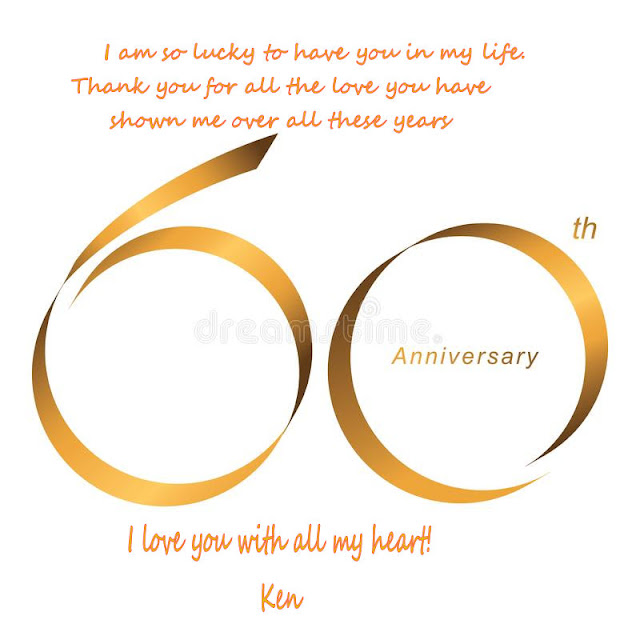