Here we are, concluding 6 months of voluntary and involuntary seclusion. Recent events have strengthened my need to seek the protection of home and masks. First, this weekend I hope to walk into the last half of my ninth decade. Also, starting in early July, an acute flareup of an old problem nearly incapacitated me. Thanks to Prednisone, I can once again tie my shoes and comb my hair.

"Old folks" learn to live with the joint and back aches of degenerative arthritis, but I was not prepared for an attack of PMR, a condition which was not even "discovered" until after I left Family Practice in 1966 for a career in uniform with the US Public Health Service. After that, my clinical duties were mostly with young active duty military and dependents, so I was not very involved in chronic issues of the elderly.

My own "discovery" occurred after I Googled "shoulder pain and generalized muscle pain and stiffness," and there is was: Polymyalgia Rheumatica. I tried home remedies such as ice packs and doses of NSAIDs and Tumeric.

It's an old adage, as Sir William Osler said, "A physician who treats himself has a fool for a patient." Early morning walks found me lagging behind my child bride and turning around halfway as MaryLou whizzed by on her way back home. Anyway, I deferred to my Internist and her referral to a fine Rheumatologist whose tests indicated inflammation and confirmed what Google had already told me.

The morning after my first dose of Prednisone allowed me to turn over in bed and even tie my boots and raise my camera to my face. Since then, except for weather and intervening appointments I have not missed a predawn wetlands walk. My energy has returned, but age plus immunosuppressant drugs are combined risk factors during the pandemic.

There were hints that land bird migration was picking up. The first Blue-gray Gnatcatchers had arrived from their breeding areas not far to the north: 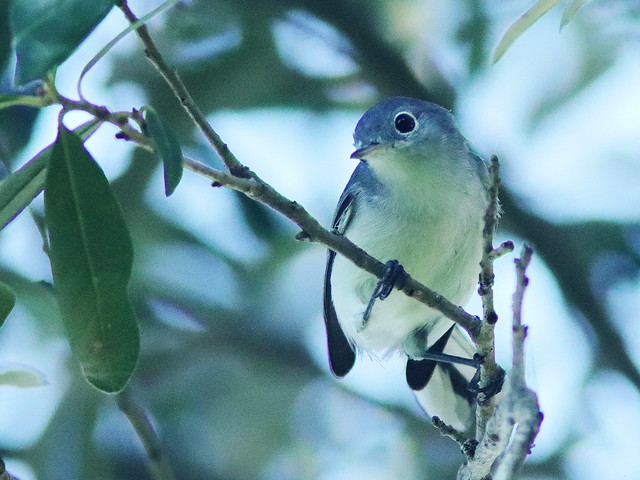 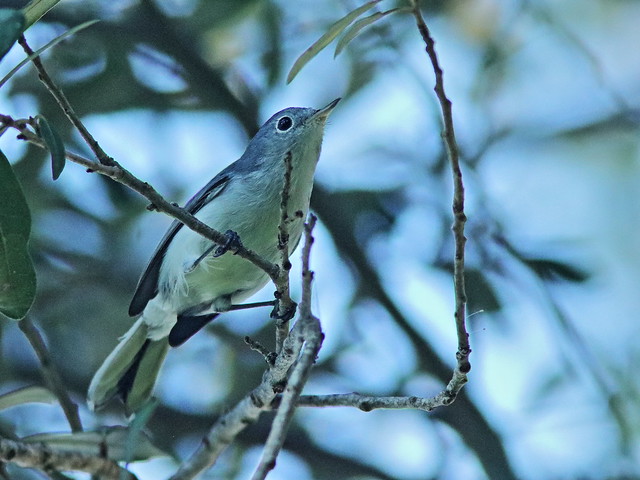 Acrobatic Black-and White Warblers also need not wander too far south of their nests (note the spirals of sapsucker wells): 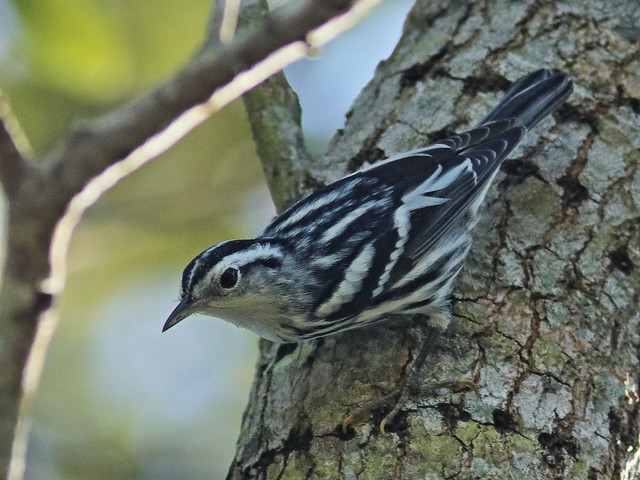 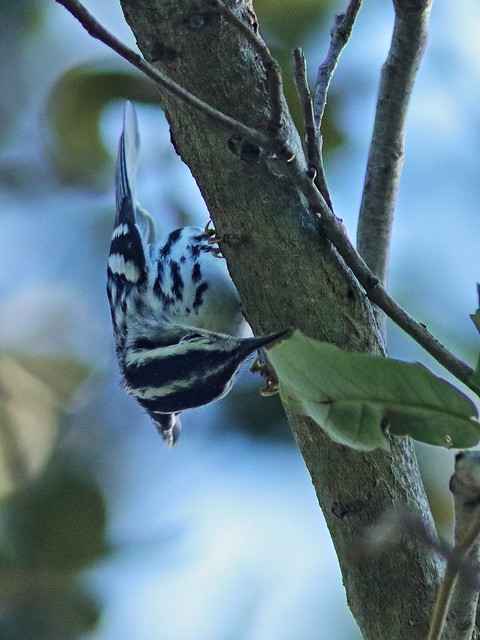 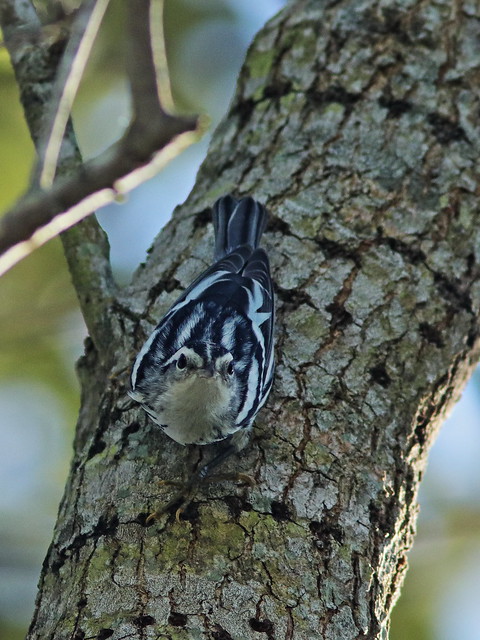 It is a joy to walk out on this peninsula in the dark, watch for meteors and listen to the sounds of nature awakening. High water has cut the peninsula into a muddy archipelago. The outermost island is inaccessible without Wellies: 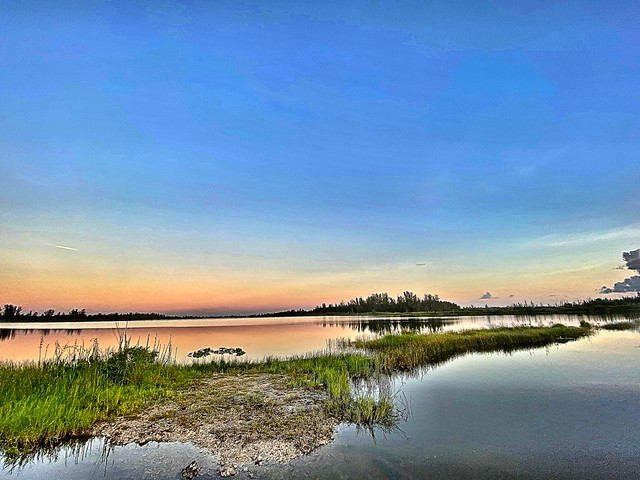 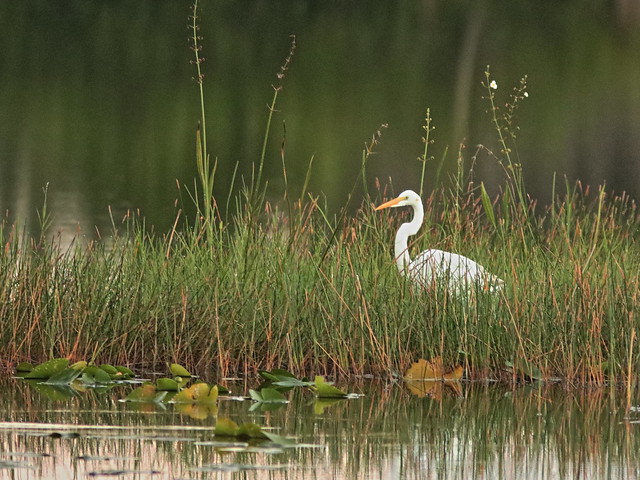 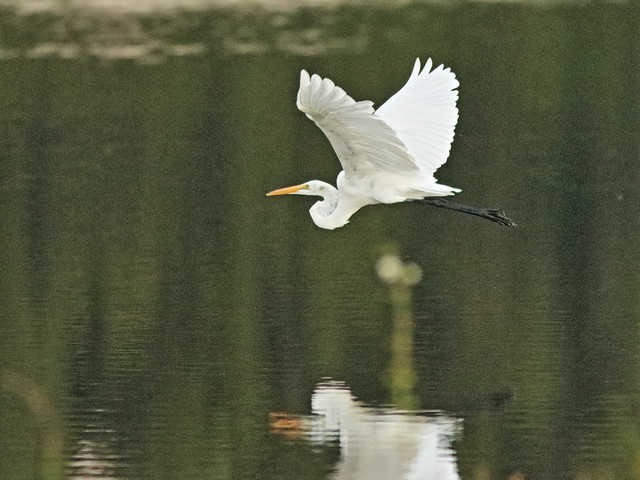 Our back yard lake has actually been more productive of wading birds than the wetland lakes and flooded prairies. A Great Egret and a Tricolored Heron seemed unusually chummy: 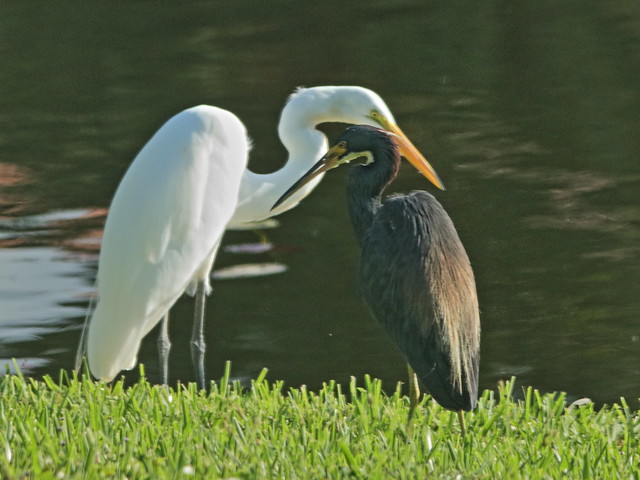 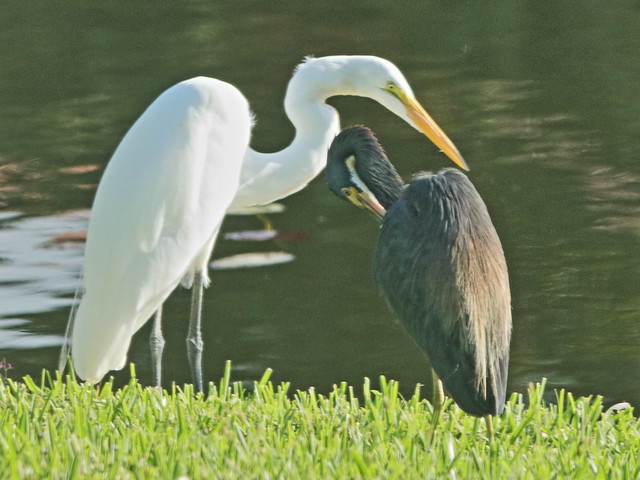 They were joined by a photobombing immature White Ibis: 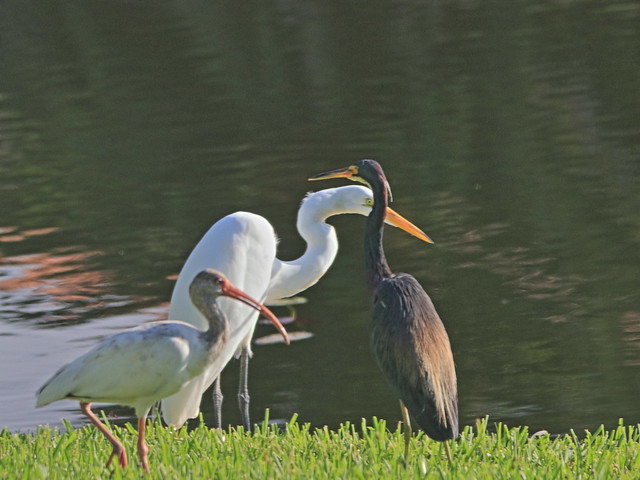 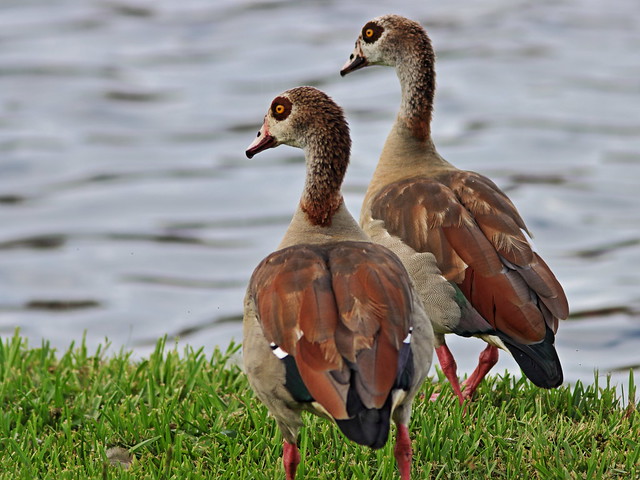 "I see the fish and stalk it furtively... 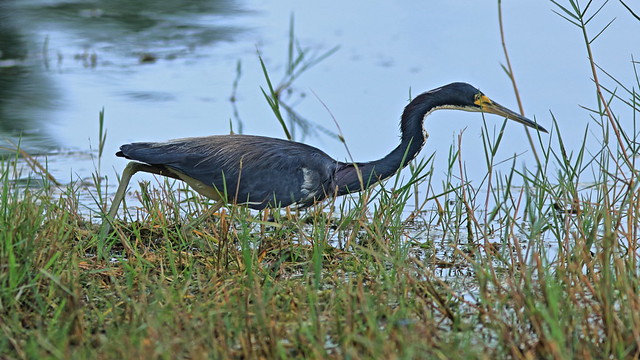 "I seize the fish and quickly carry it to high ground in case I drop it... 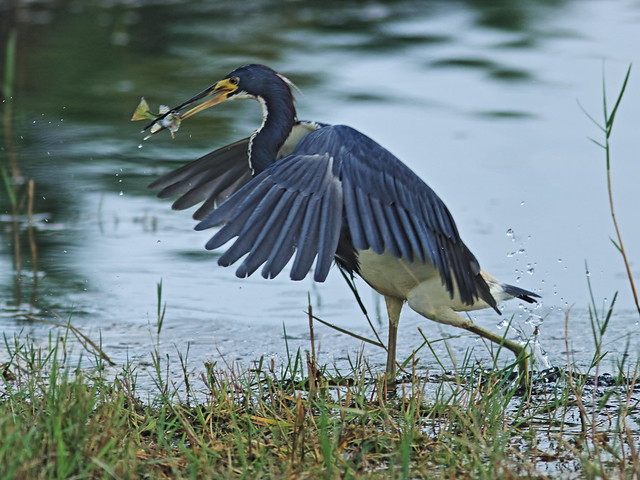 "I squeeze the fish and carefully work it up to my mouth... 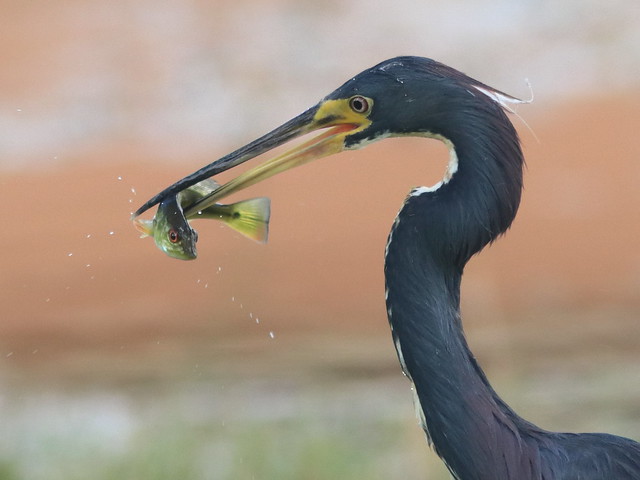 "I eat the fish after flipping it up in the air and into my gullet in a move too fast for the camera:" 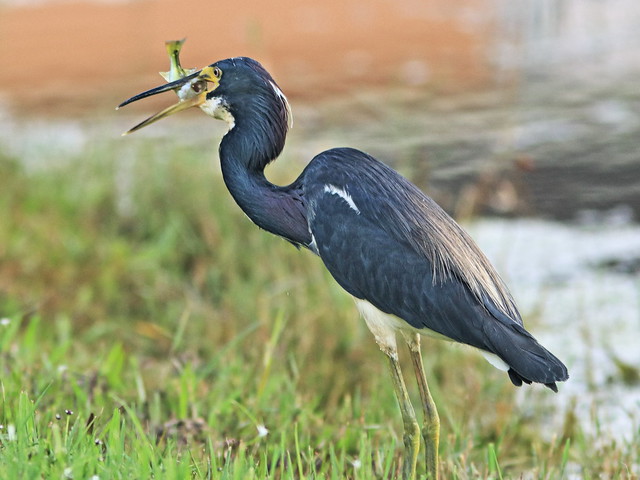 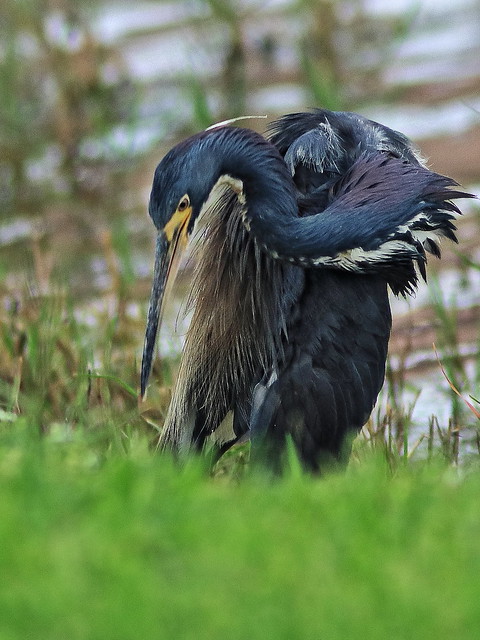 Pop-up storms are a feature of the summer season in south Florida. One morning the sky seemed placid except for a storm cloud on the southern horizon, building fast and moving my way : 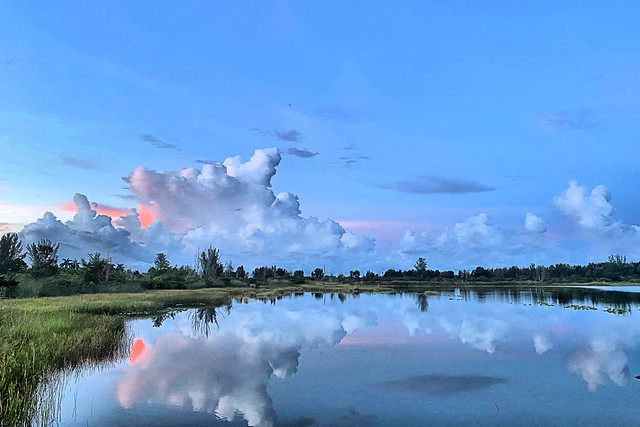 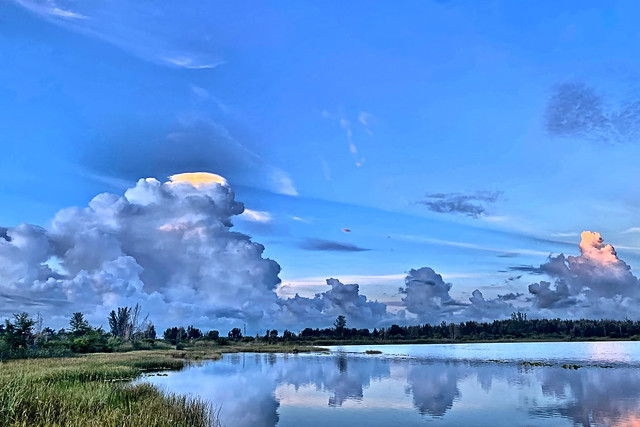 Conflicting winds stirred the wispy clouds into random hash marks as I neared the exit gate and heard thunder: 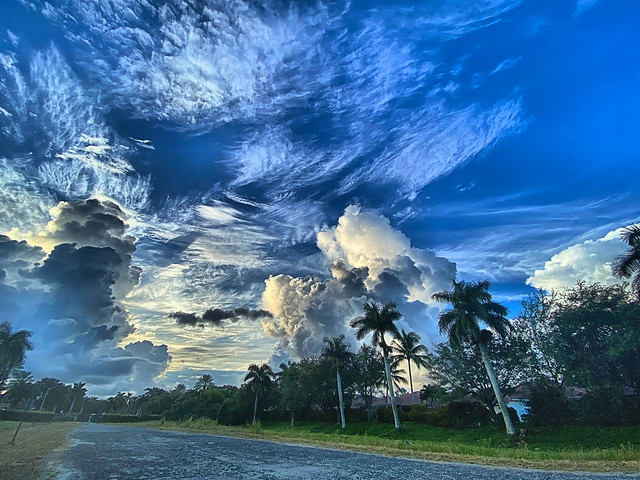 A reassuring hand (or was it an eagle's wing?) extended out and seemed to say "Everything will be OK:" 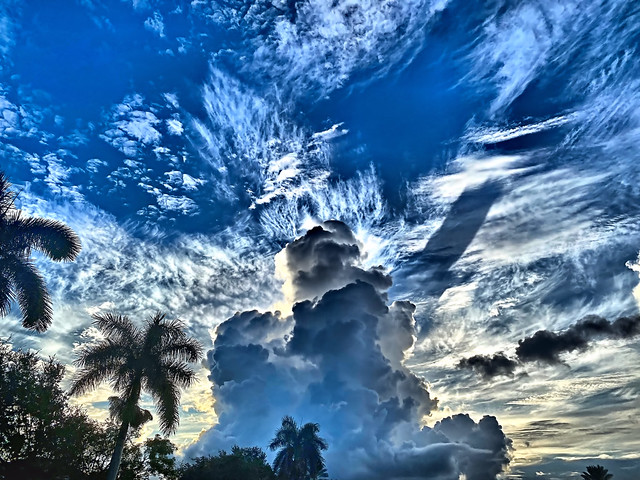 Topping off the week was this uplifting photo of our grandson's wife volunteering for veterinary school: 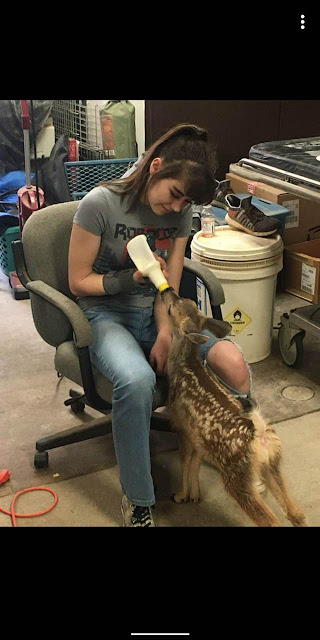