We have missed a few morning walks due to weather, medical appointments and the weekly early morning grocery curbside pickup.  Photo opportunities are limited because we walk out into the wetlands in the dark, an hour before sunrise.

The dark sky was an interesting backdrop for these flash photos of a Northern Flicker in a Maple tree along the trail: 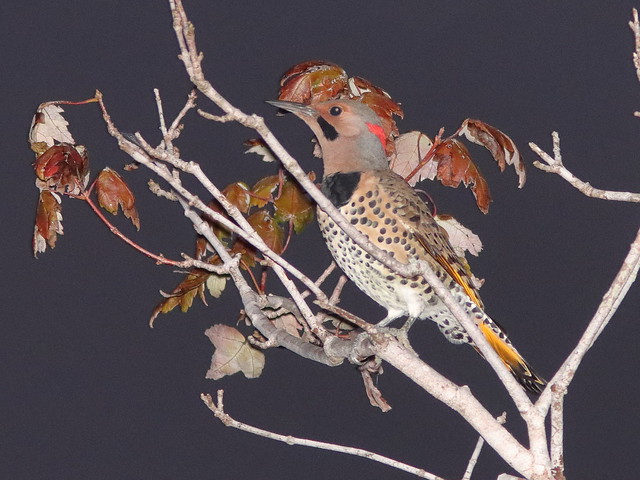 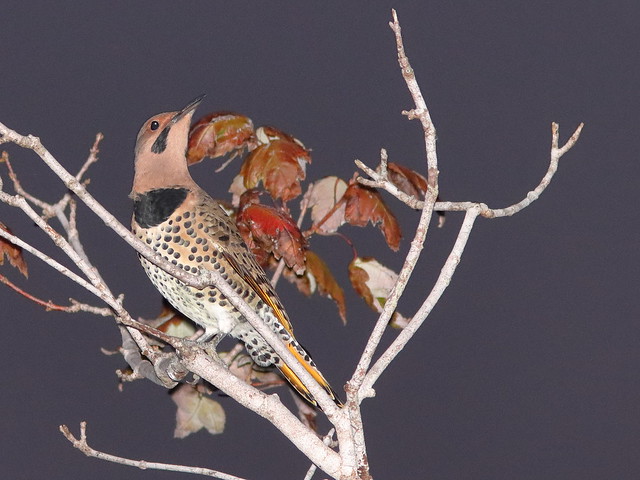 A similar opportunity occurred  earlier this year with a male Northern Cardinal: 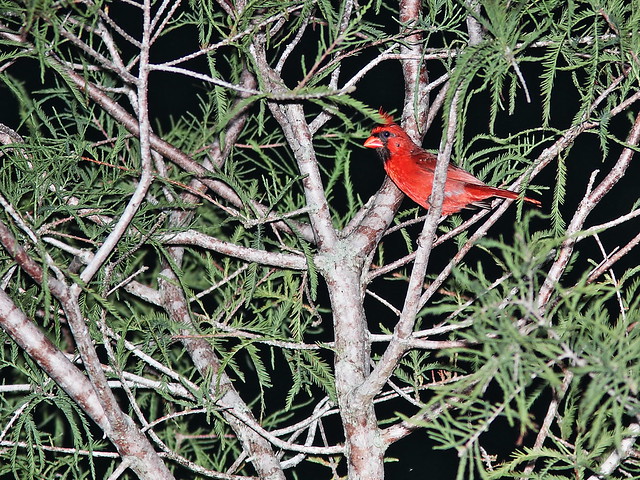 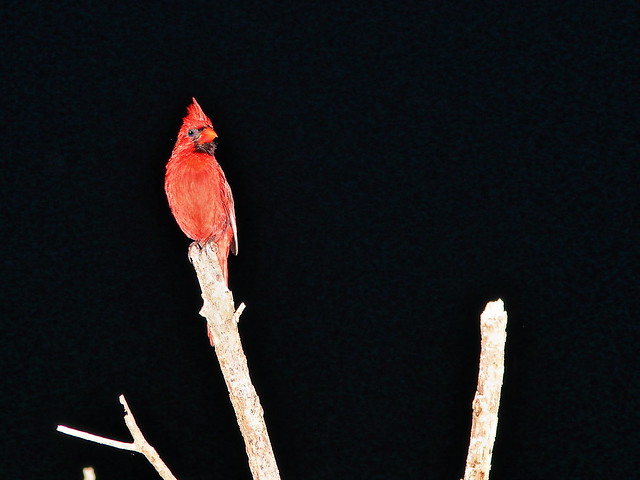 So far this autumn there were no unexpected sightings, but it was nice welcoming back some migrants and winter residents. Palm Warblers have arrived in good numbers. Many of these little tail-waggers will stay here until spring, populating residential lawns and gaining the nickname of "Florida Sparrows:" 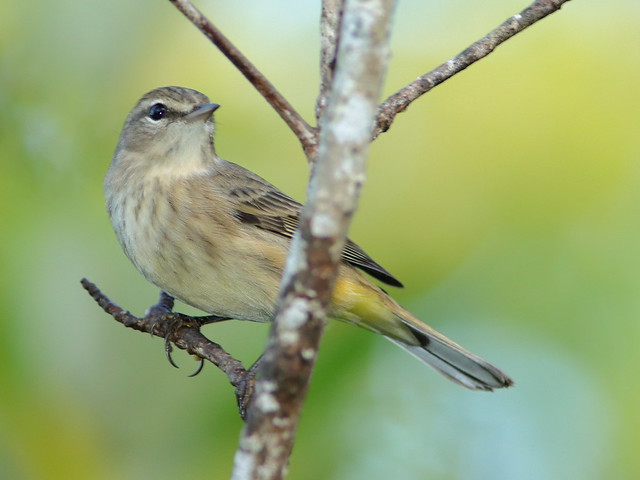 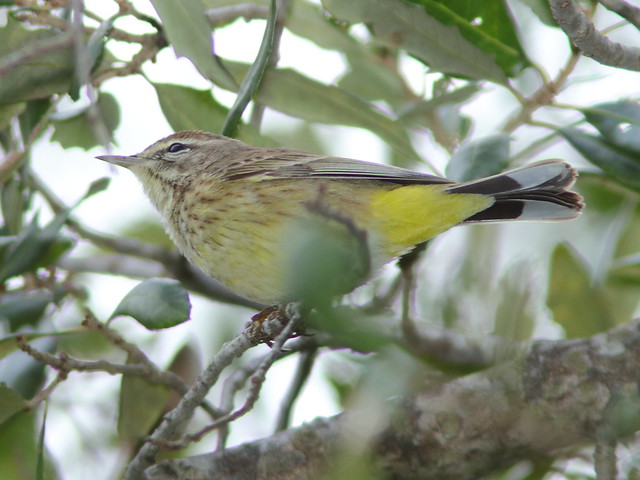 Most of the Palm Warblers are from the drab-plumage western population, which migrate in a southeasterly direction and cross migration routes of the eastern birds, most of which spend the winter to the west of Florida. Those from the northeast are more brightly colored. Here is an eastern "Yellow Palm Warbler" which I photographed locally back in February, 2020. Its undersides are entirely yellow with reddish streaks and it has a chestnut-colored cap: 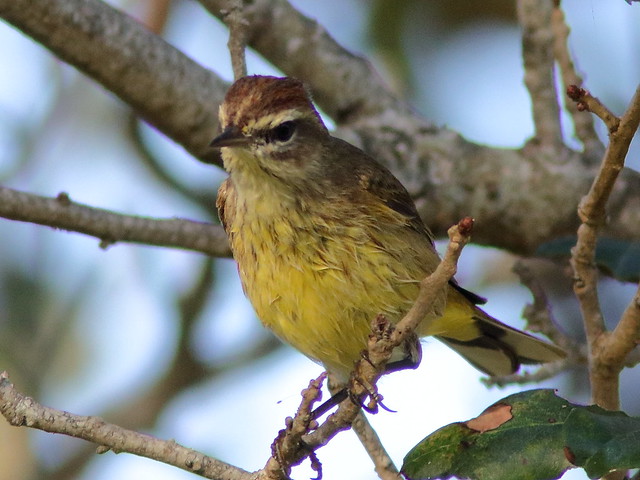 Northern Parula warblers are abundant, probing amid the leaves out to the tips of the branches: 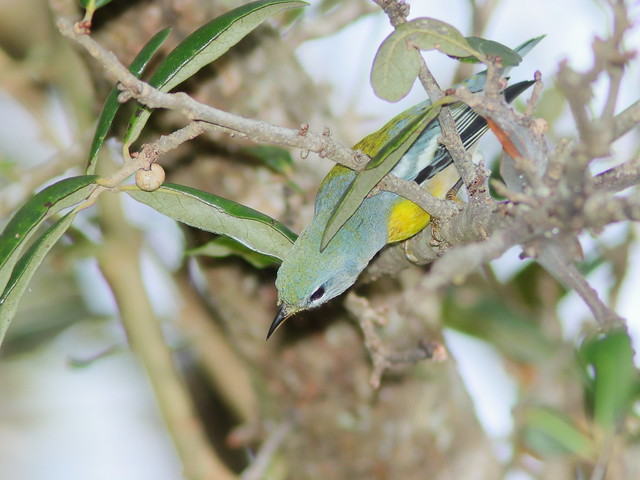 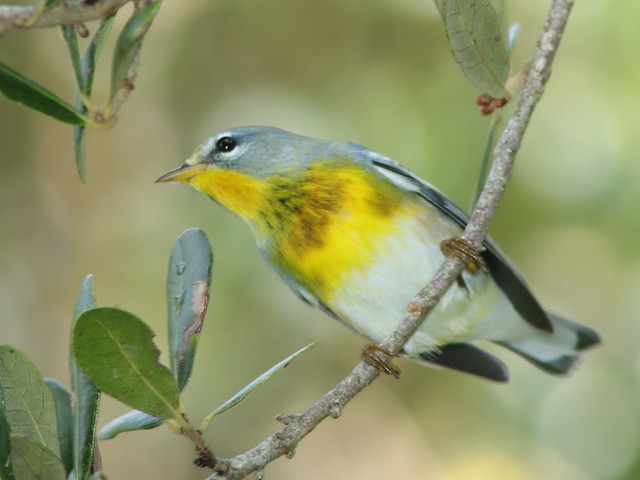 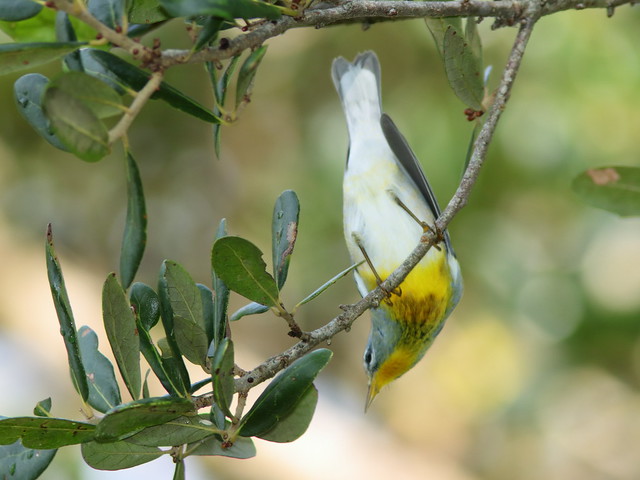 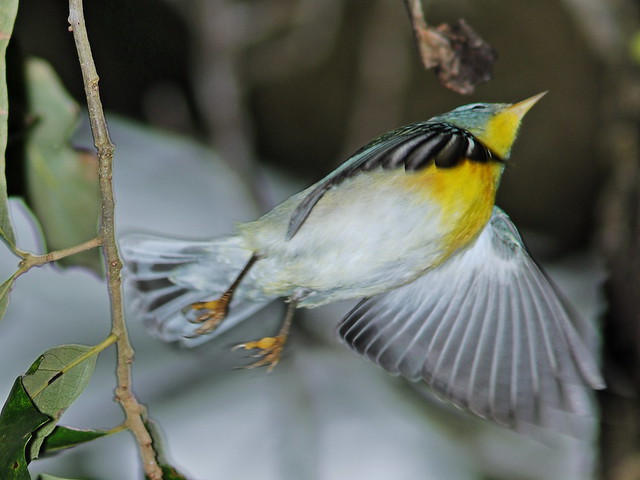 I never pass by an opportunity to get a photo of a Yellow-throated Warbler. They are quite solitary and it is unusual to find more than one at a time: 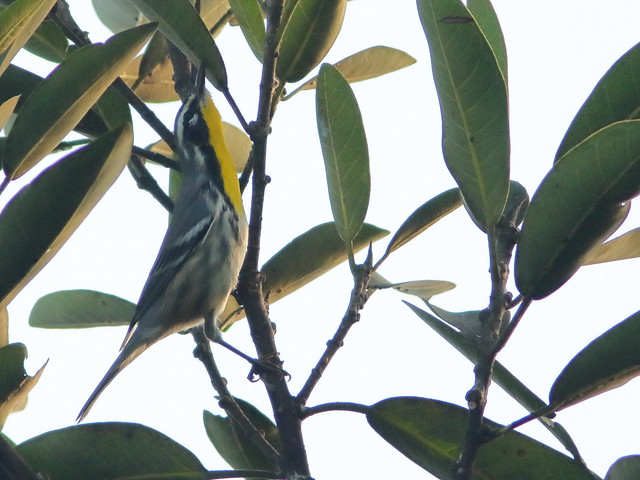 Common Yellowthroats, reclusive little pot-bellied birds, are warblers which nest locally but whose numbers are greatly augmented by southbound visitors. The adult male has a black face mask and bright reddish brown cap: 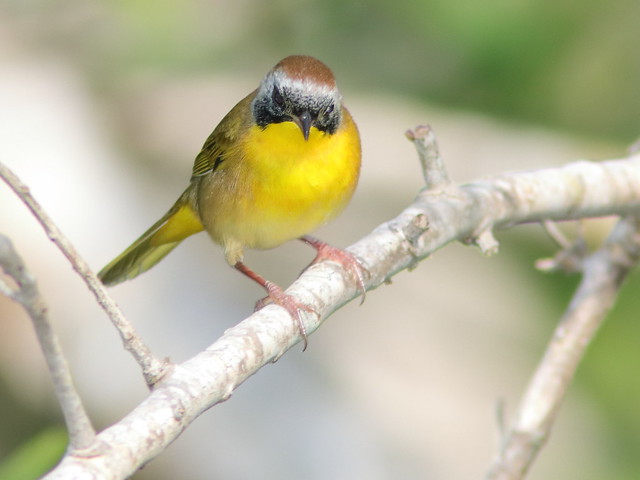 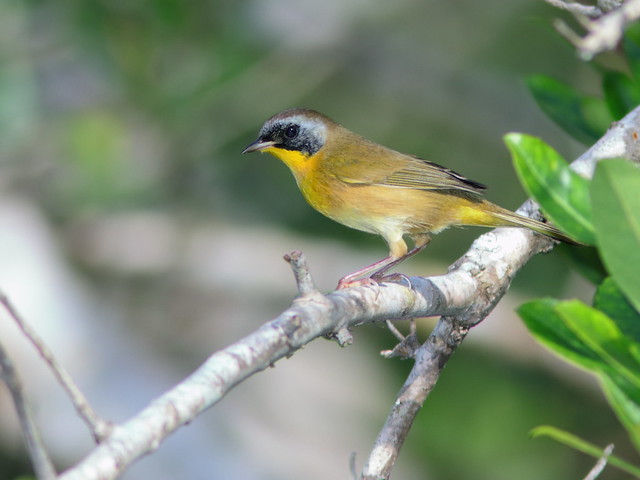 Immature male yellowthroats will have full dark masks by springtime... 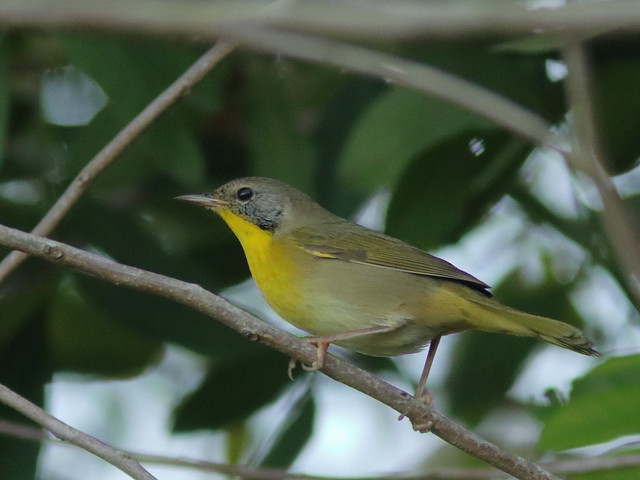 ...while females lack masks but have rather conspicuous eye-rings: 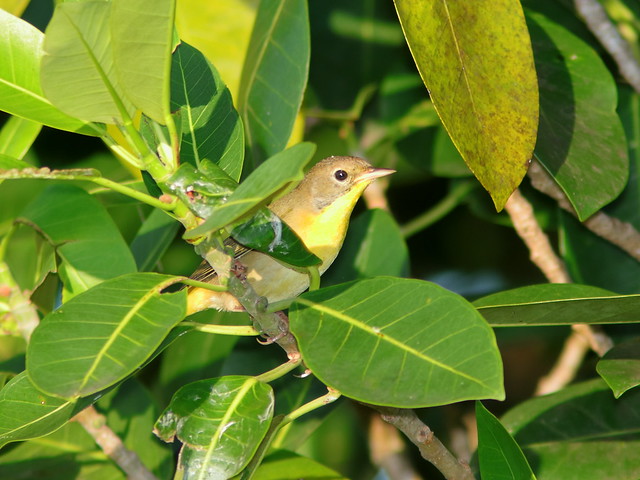 Many Black-throated Blue Warblers have arrived. These are enjoying the berries of Trema trees near the Bald Eagle nest. This is a male: 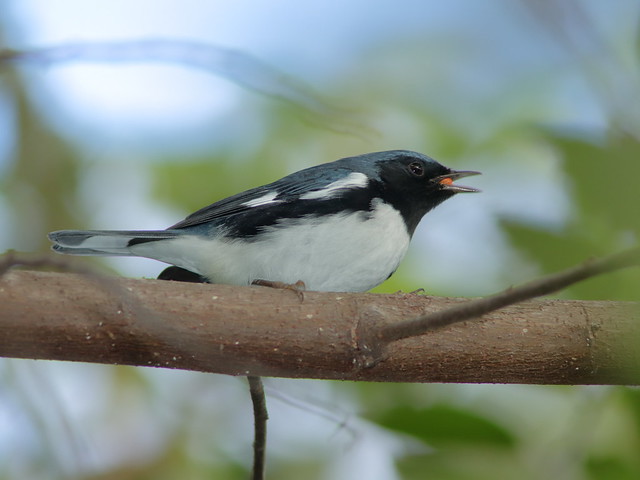 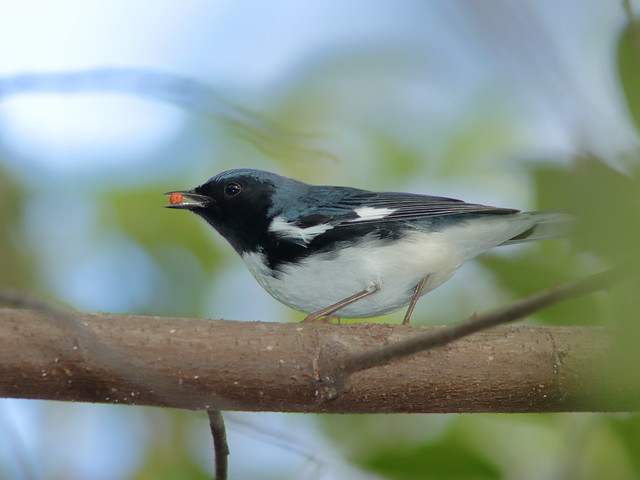 The plumage of the female is subdued, but beautiful nonetheless: 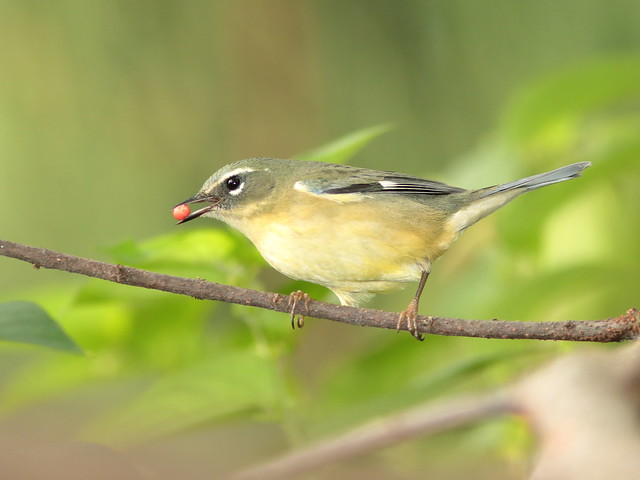 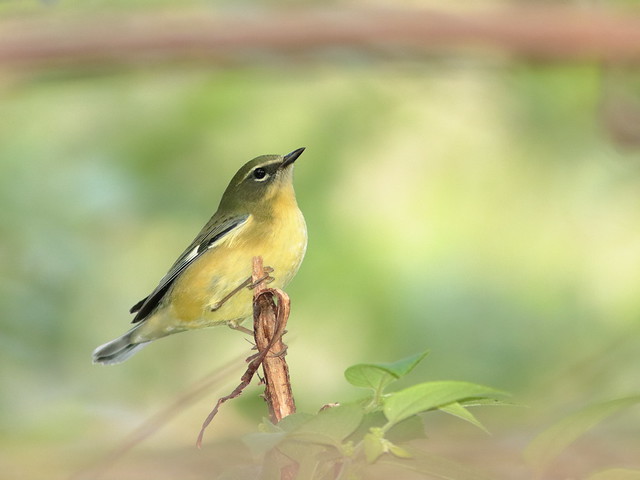 After most disappeared in early spring to nest in coastal mangroves, the Prairie Warblers are back: 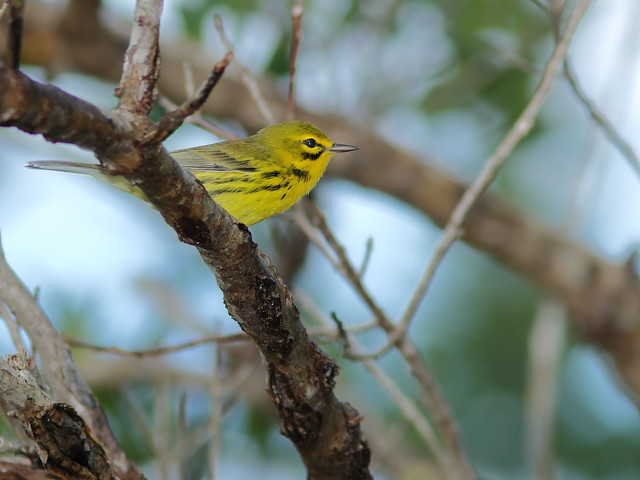 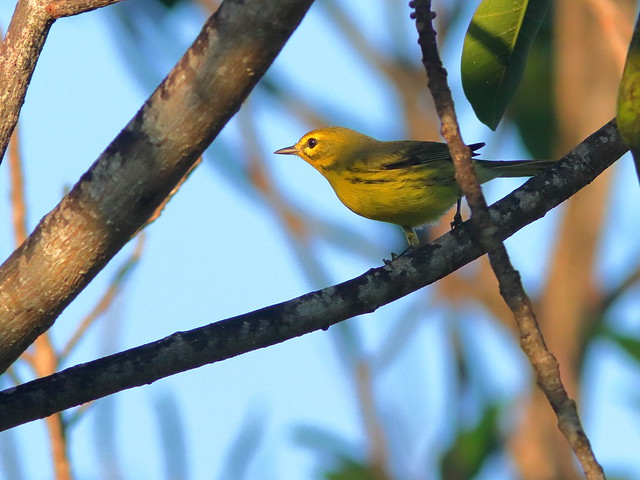 Perky Blue-gray Gnatcatchers can be distractions as they actively move through the trees and we try to distinguish between them and the warblers which are frquently their traveling companions: 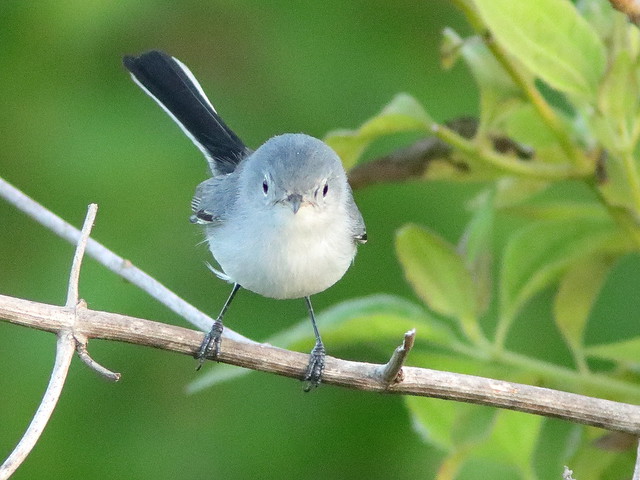 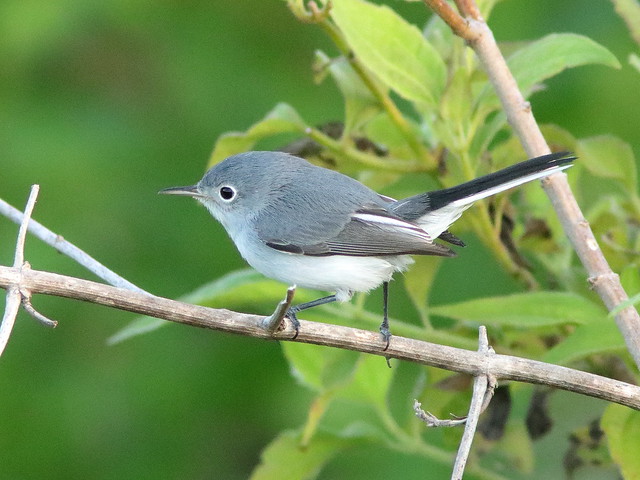 Other arrivals included...
Ruby-throated Hummingbird (with its beak coated with pollen)... 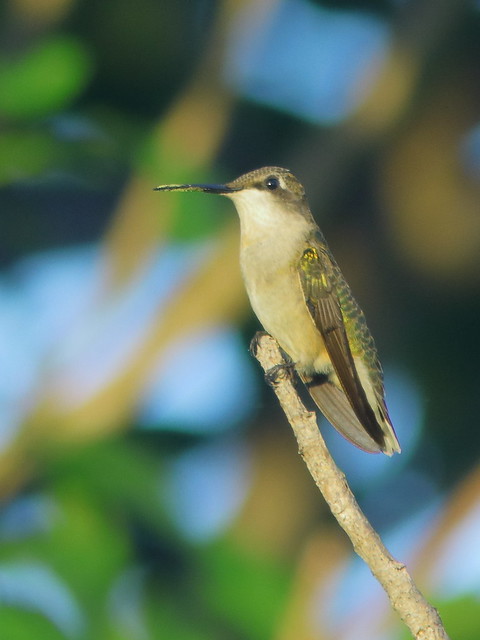 ...Eastern Phoebe (Its bright yellow undersides will bleach into white before it returns north in the spring)... 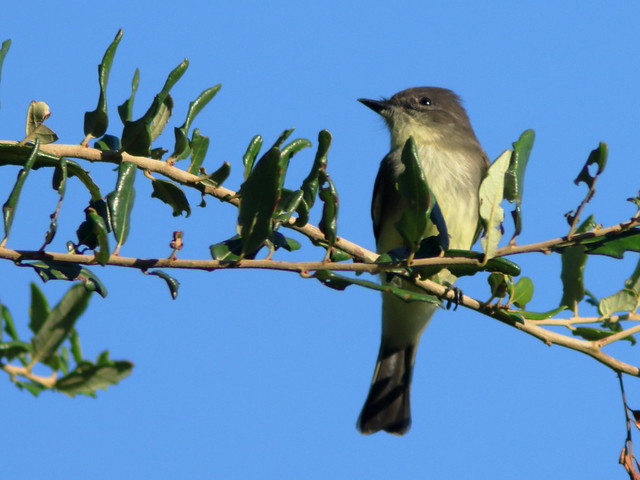 ...and another flycatcher, the Eastern Wood-Pewee, which differs from the phoebe by having wing bars and eye rings: 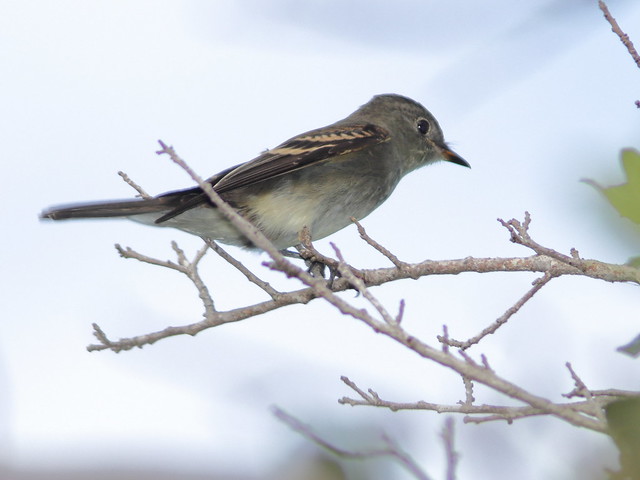 A half hour before sunrise, this is a view from the Levee Trail of the "civilized" opposite side of the canal: 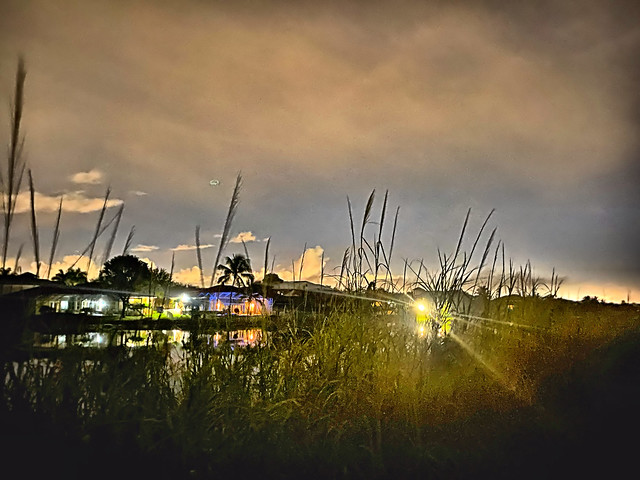 Fifteen minutes later, the sun emits crepuscular rays which stream out over the canal... 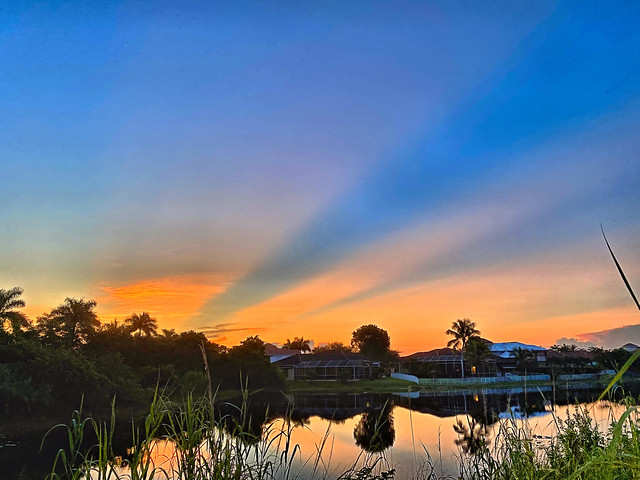 ...and converge to the west over the Wounded Wetlands and the Everglades Preserve beyond: 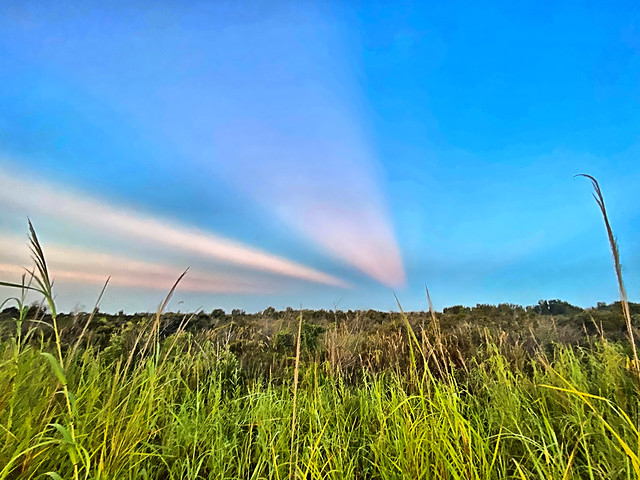