A stormy week and a dash of color

This week, within a twenty-four hour period, Tropical Storm Eta dumped over 17 in / 43.2 cm of rain on our city, the worst rain event in 25 years and the highest total among all south Florida cities. Its slow progression kept us inside for several mornings.

Before the rains came I visited nearby Chapel Trail Nature Preserve, where I was treated to the sight of two male Painted Buntings. They were elusive and despite their brilliant colors, often blended in with the foliage as they foraged in low shrubs. One took a perch in plain view, which allowed me to catch him in a variety of interesting poses (sorry for the overdose, but I could not help myself): 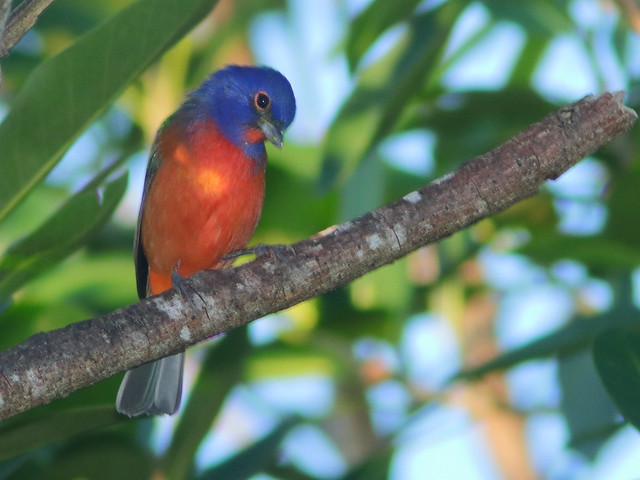 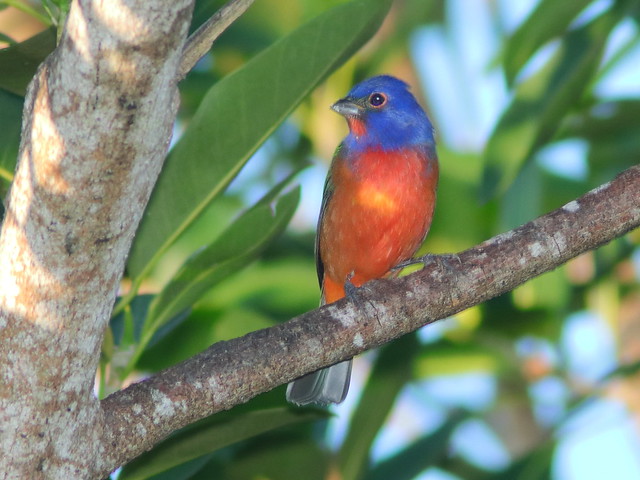 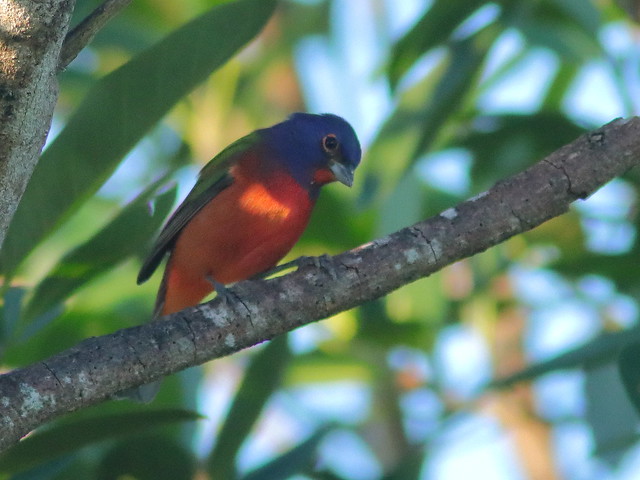 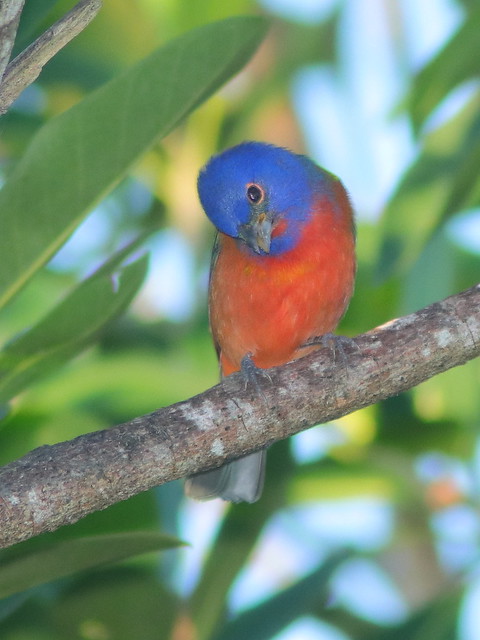 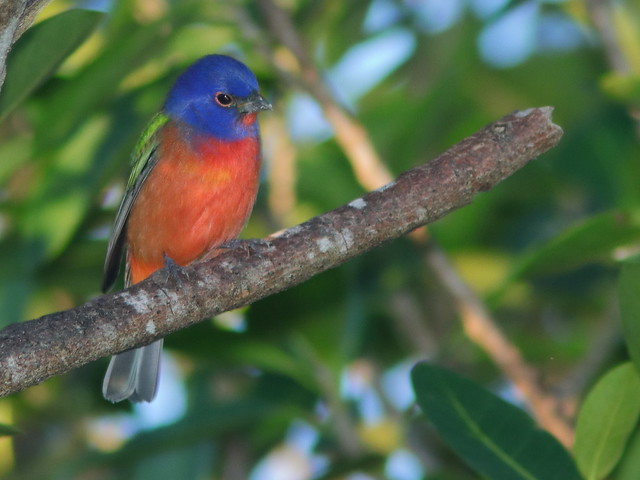 I obtained only one clear shot of the other male bunting: 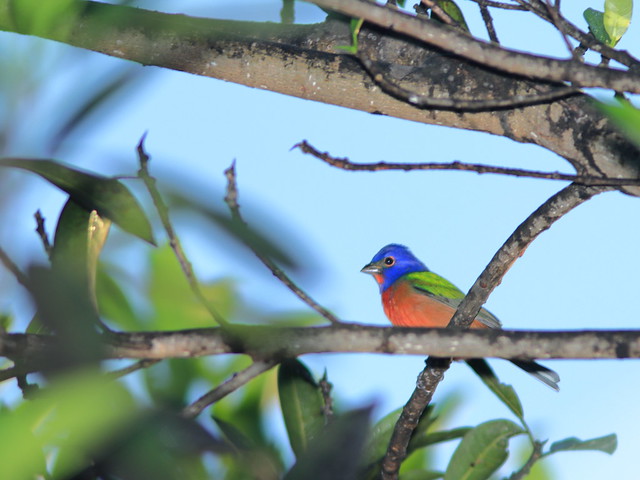 A male Prairie Warbler flew down and inspected me quizzically: 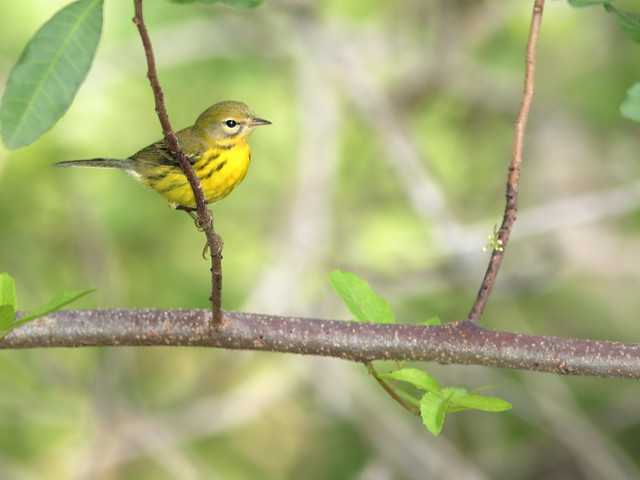 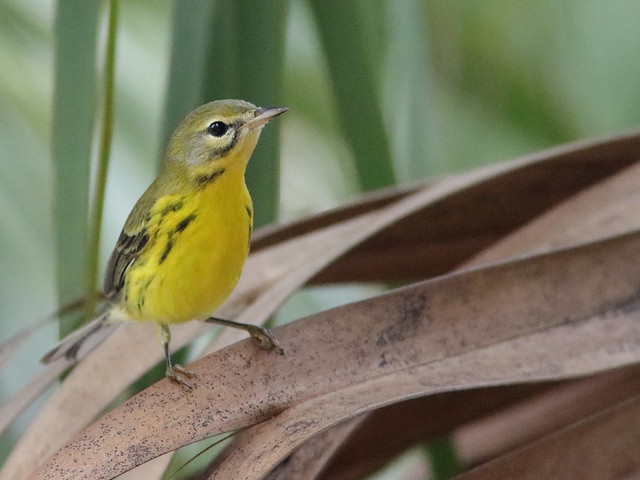 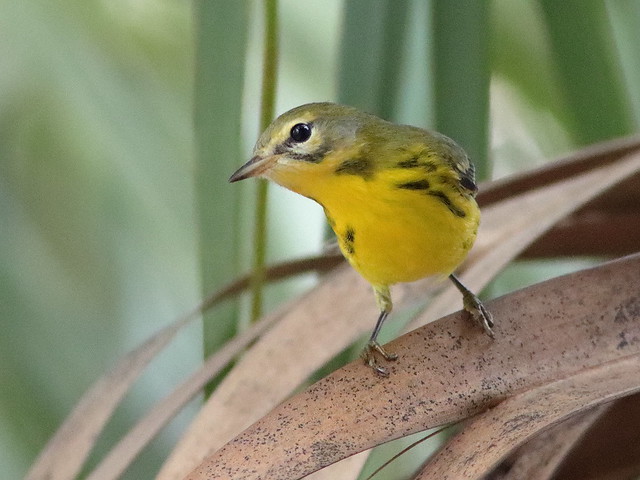 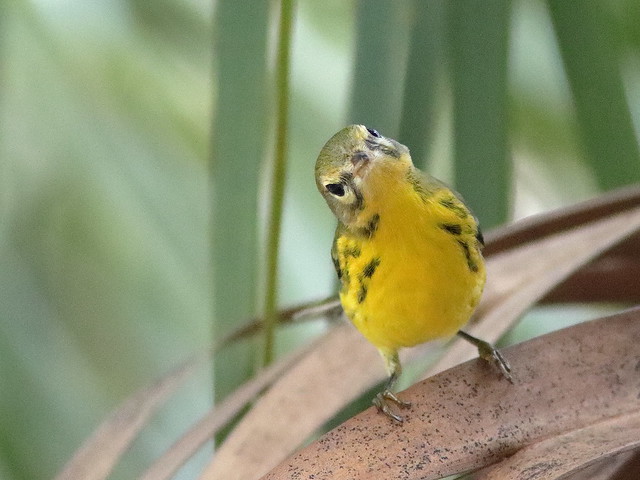 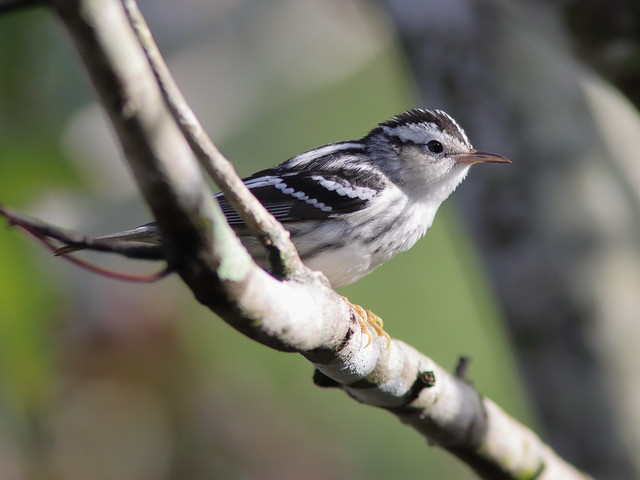 A mother Raccoon with her nearly full-grown kit occupied a tree next to the boardwalk: 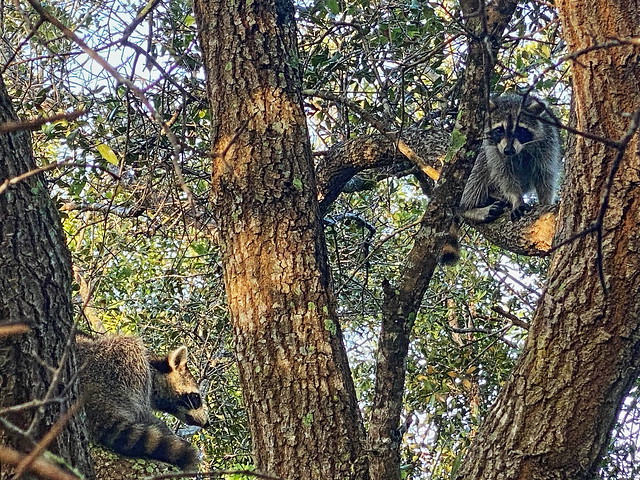 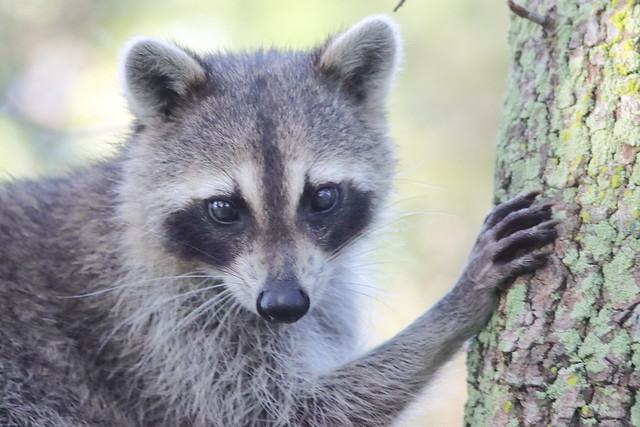 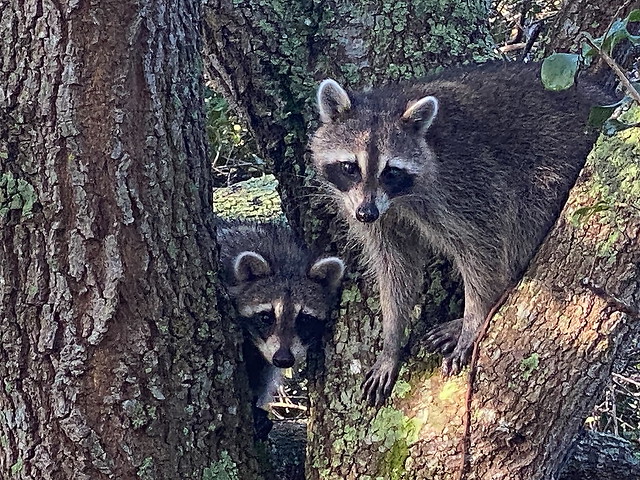 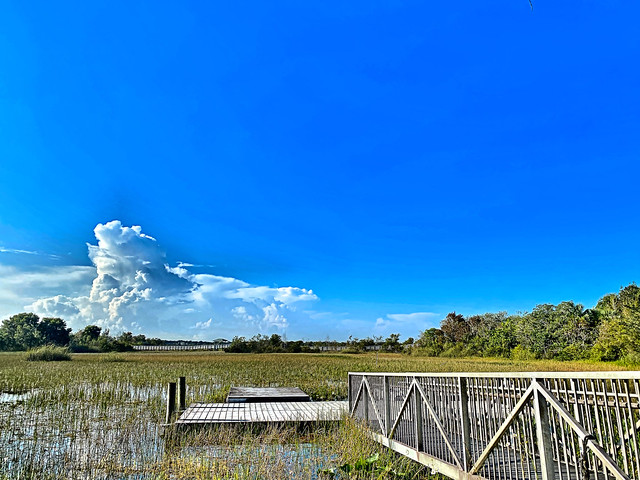 Pink sunrise over the wetlands: 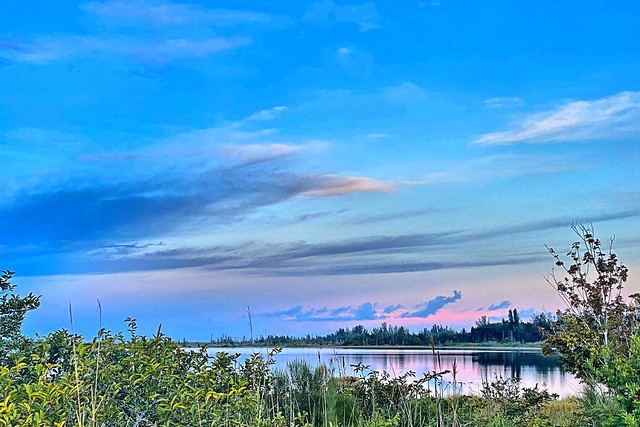 Tropical Storm Eta radar on my iPhone on the evening of November 8, moving north after crossing over Cuba. A band  of strong winds and drenching rain was just passing over our home (the blue dot). Our streets flooded, with surface water lapping at our garage entrance. The lake level rose about 3 feet, but spared our home, which is about 8 feet above sea level:

The storm then moved out to the south and struck the western part of Cuba for the second time, then reversed course. It  has strengthened to hurricane force and now is headed for the west coast of Florida. Again, three days later, on November 11, we  experienced bands of rain and wind, but no serious flooding.

The scene from our back yard before sunrise, in between the rain bands. The lake level has receded-- the coconuts on the lawn mark the flood water level, which did not reach our house. 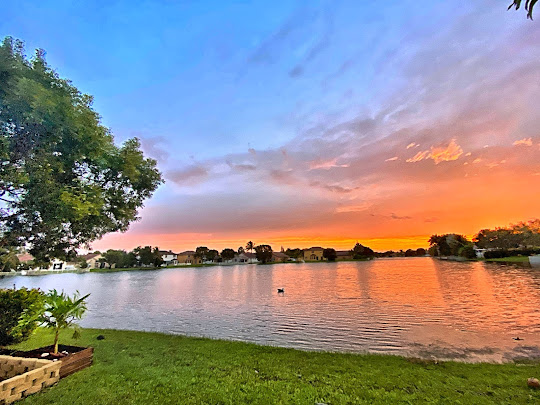 Trema trees, which produce berries all winter and are an important source of food for wildlife, are particularly vulnerable to high winds. They have shallow roots which do not anchor them very well, especially when the ground is saturated with water.
Three years ago, nearly all the mature Tremas in our local wetlands were felled by Hurricane Irma. Saplings do not set fruit for a few years and I was so pleased to see many in the woods surrounding the local Bald Eagle nest.
Here is a female Prairie Warbler amid the Trema berries in late August: 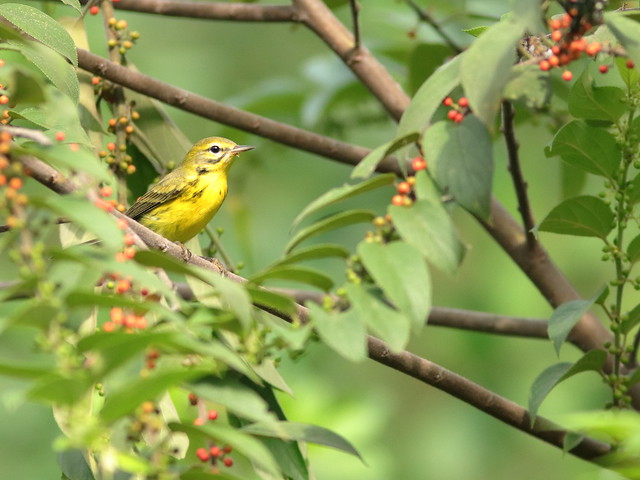 Even though Eta was only a tropical storm, it brought wind gusts of 60 mph / 96 kph which were strong enough to knock down many of the larger Tremas: 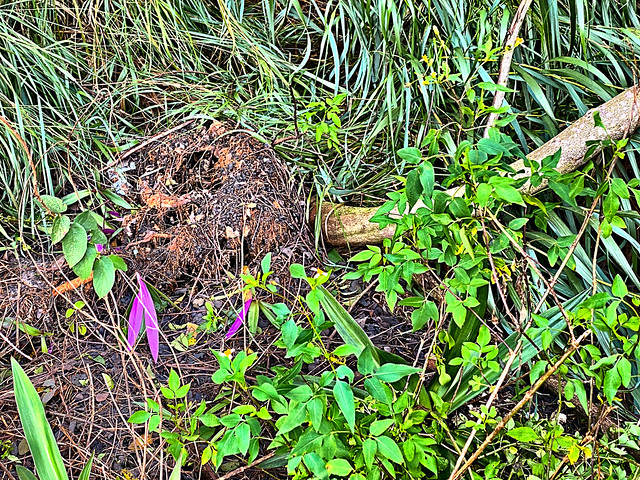 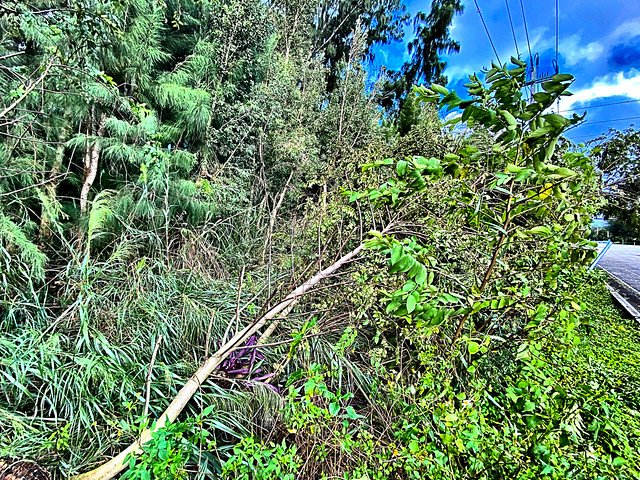 For several years I have been conducting "First Saturday Wetland Walks" during the cooler months at Chapel Trail preserve, sponsored by the south Florida Audubon Society. This year I decided not to lead them because of my increased susceptibility to infections due to the immunosuppressant effects of Prednisone which is greatly helping my PMR condition. It would be difficult to maintain social distance on the narrow boardwalk. I hoped that someone might offer to lead them but they have been canceled indefinitely.
= = =  = = =  = = = =  = = = = =