We usually set out into the local Wounded Wetlands preserve about an hour before sunrise. This provides an opportunity to hear (and sometimes see) nocturnal bird species such as owls and nightjars.

For the first half hour it is nearly pitch dark unless the Moon is in an early phase. Flashlights are essential, if only to keep us from stumbling on the rocks or avoid stepping on a snake. Wildlife photography is essentially impossible without artificial light.

Below the horizon, the sun progressively brightens the sky and its glare obscures the stars and all but the brightest planets. Depending upon the seasons (which affect the angle at which the sun approaches the horizon) "civil twilight," also known as the "crepuscular" period, begins when the sun is 6 degrees below the horizon and ends 20-30 minutes later at sunrise. The morning chorus of bird song usually builds up during this period and tapers off after sunrise.

Now, many birds are undergoing the post-breeding molt. To save the energy needed to replenish their feathers, they are quiet and reclusive. For the past two to three weeks the morning chorus has dwindled into a few solo notes from... 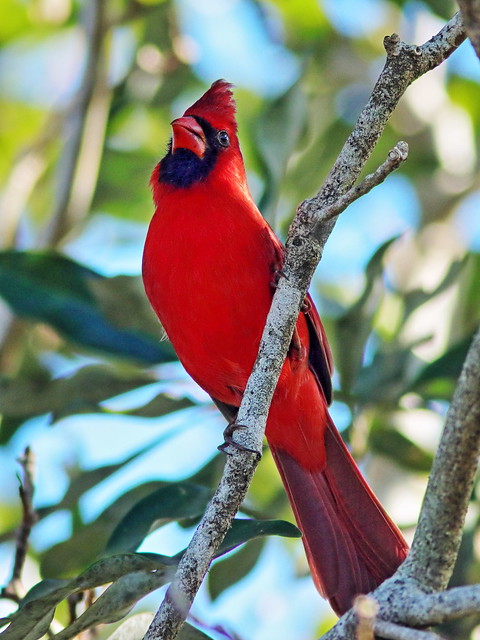 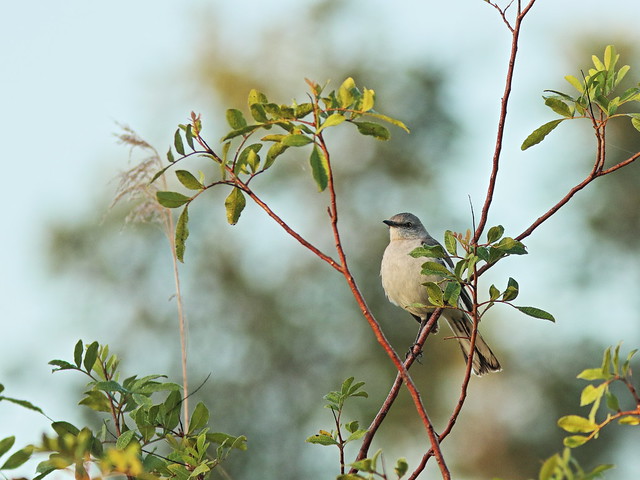 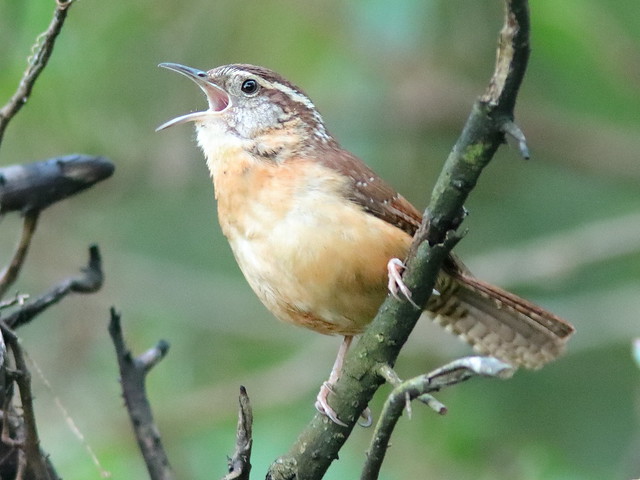 One advantage of the early walks is that we are spared the heat of the sun. Heat exhaustion is a threat when, soon after sunrise, temperatures and humidity quickly become oppressive.

Another advantage is the opportunity to see some marvelous skies. I know that trying to interpret cloud formations can be a bit silly, but could this possibly be a swordsman ready to do battle with a monstrous dragon? 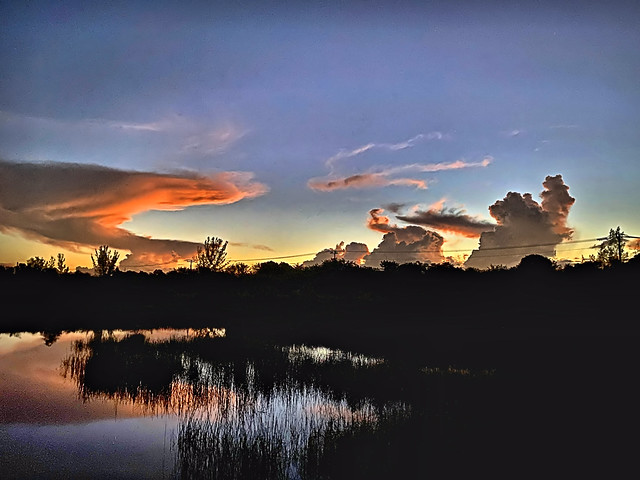 Persistence of Saharan dust in the atmosphere this past week enhanced the morning colors. Shadows of clouds on the eastern horizon created ever-changing interruptions of the crepuscular rays: 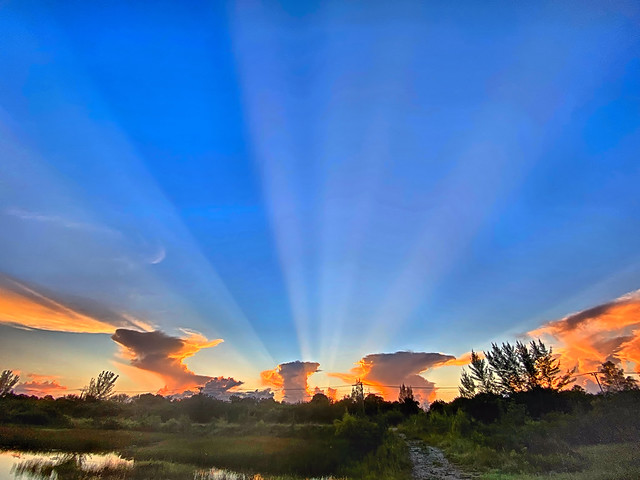 On the opposite horizon, the anticrepuscular rays filled the sky and converged over the Wet Prairie...

...and reflected on the lake: 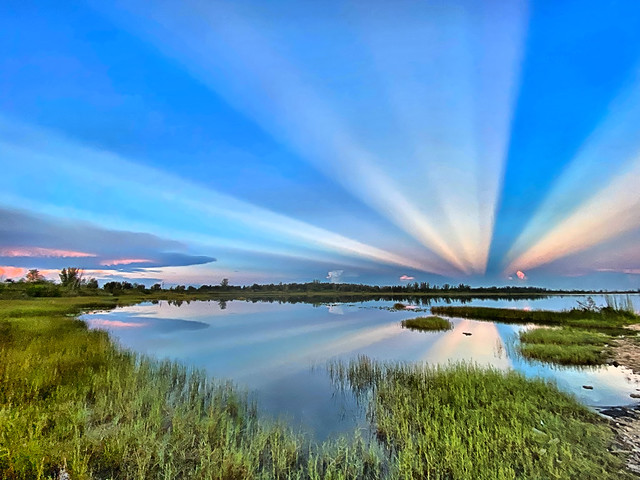 In the poor morning light, an immature Red-shouldered Hawk roosted next to the lake: 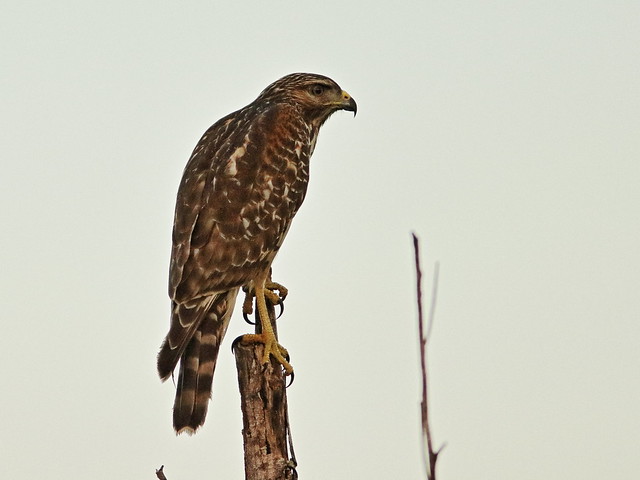 It took flight and landed on a flimsy branch atop a Pond Cypress: 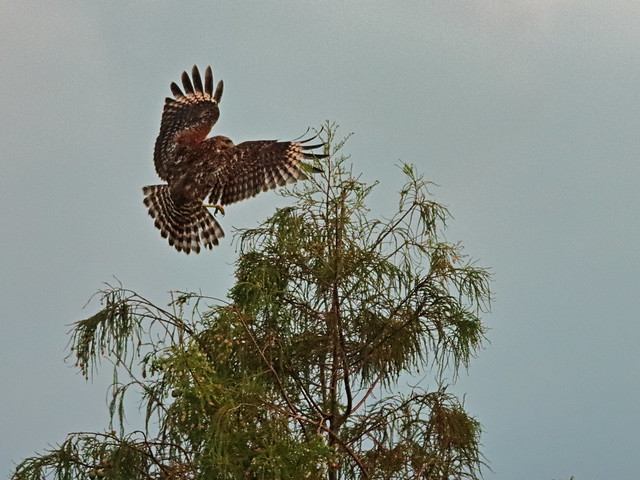 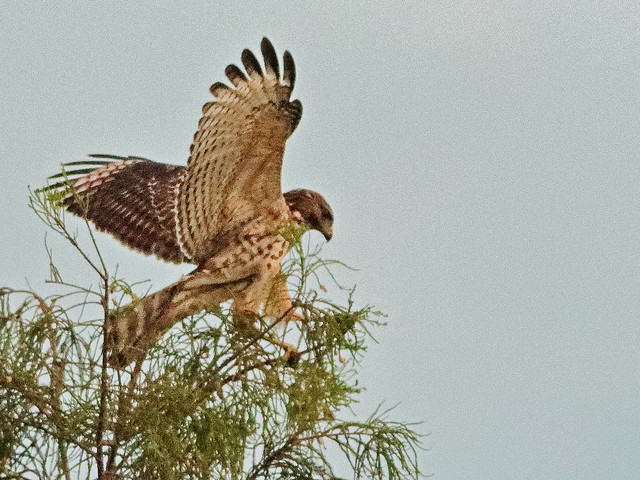 At nearby Chapel Trail preserve, an immature Little Blue Heron foraged with a Mottled Duck: 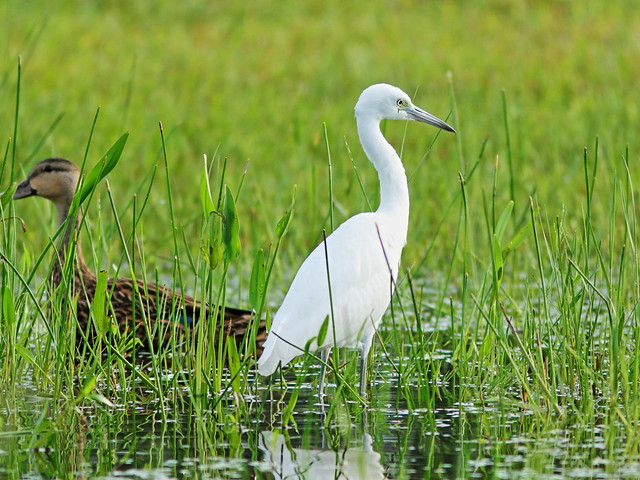 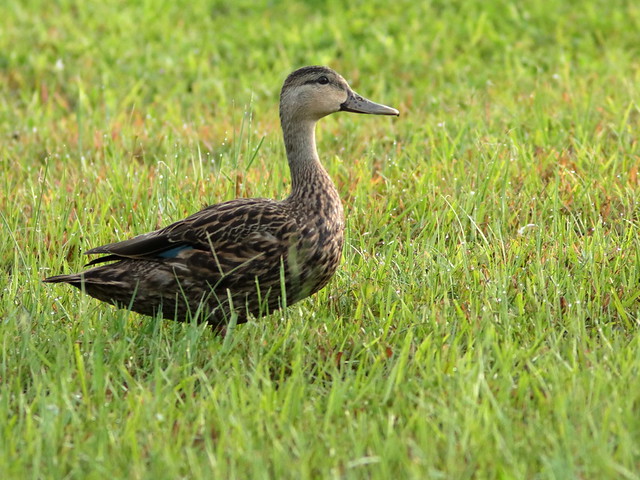 In our back yard early in the morning,  a Muscovy Duck loafed on the decoy which serves as a float for the intake of our lawn irrigation system: 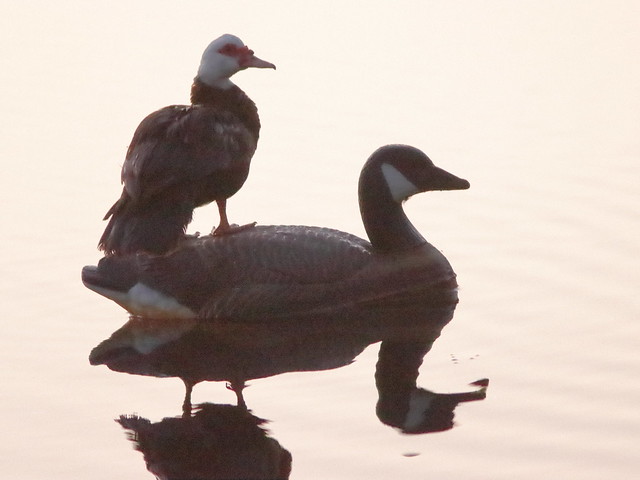 An Anhinga entertained us by resting on the same decoy: 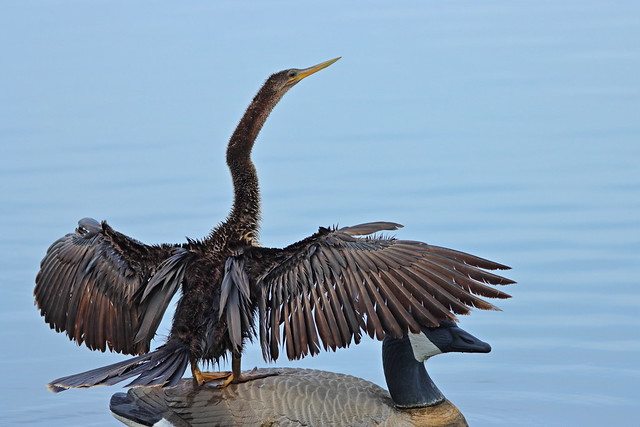 Later, the Anhinga decided to bask on our patio. These are my iPhone photos, taken through the glass of the patio door: 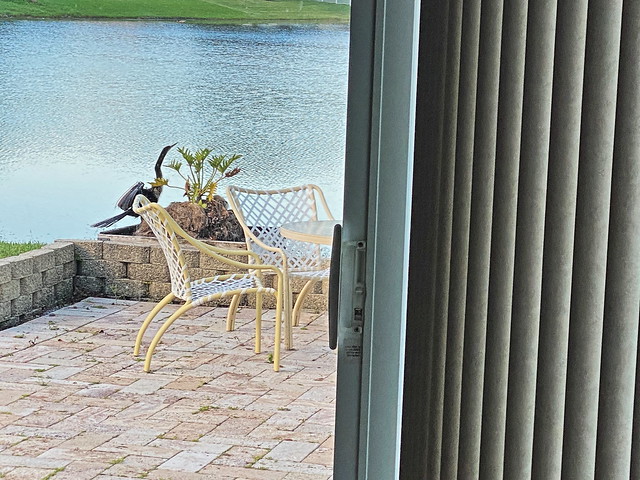 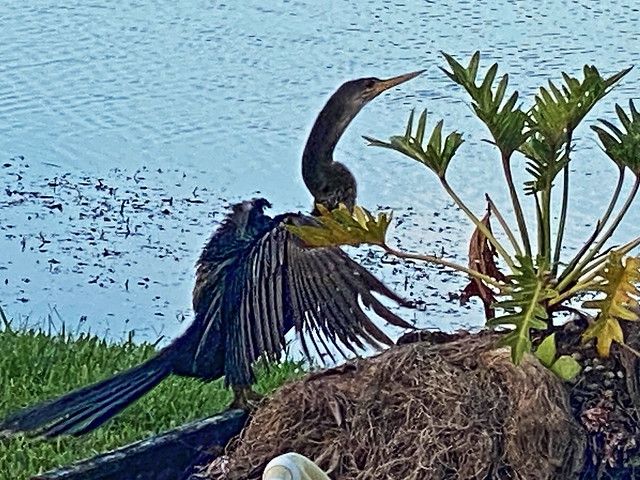 Since my DSLR camera cannot zoom, its viewfinder captured only the Anhinga's neck and head as it aired its wings. It was next to a Coontie which I had recently planted. I liked the aesthetics of the portrait as well as the symbolism. The Anhinga is a representative of the ancient Darter family whose fossil records date back 40-50 million years. The Coontie is a primitive Cycad which originated some 280 million years ago: 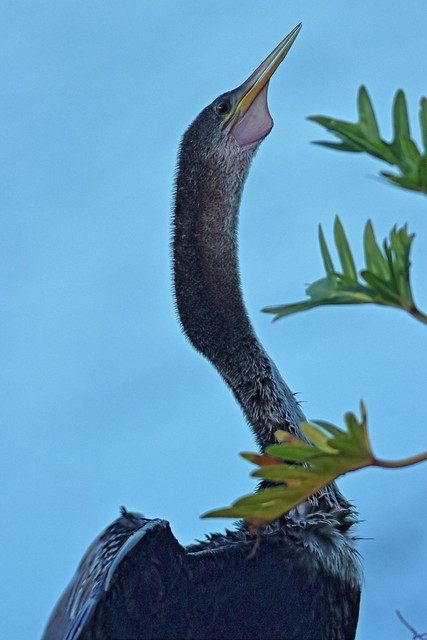 As to be expected, my visits to medical facilities increase with age, but they can provide photo opportunities for some interesting reflections: 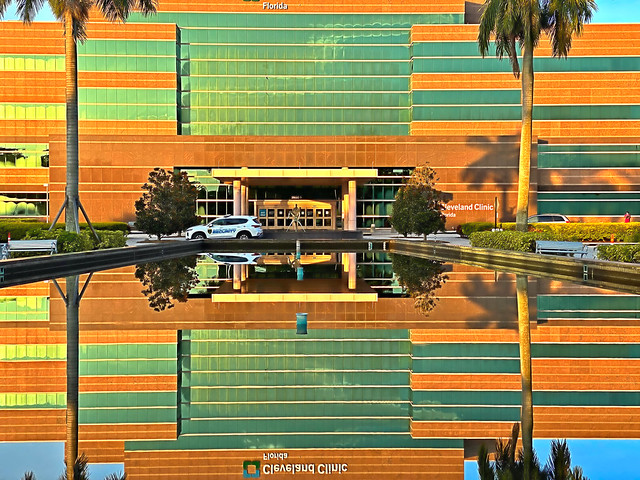 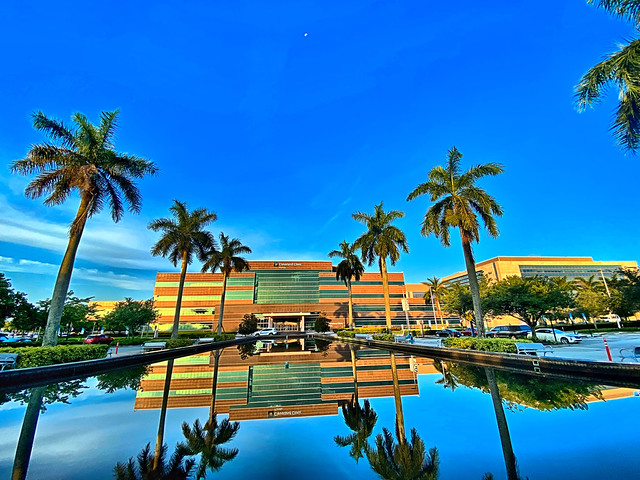 The fountains turned on and spoiled the reflection: 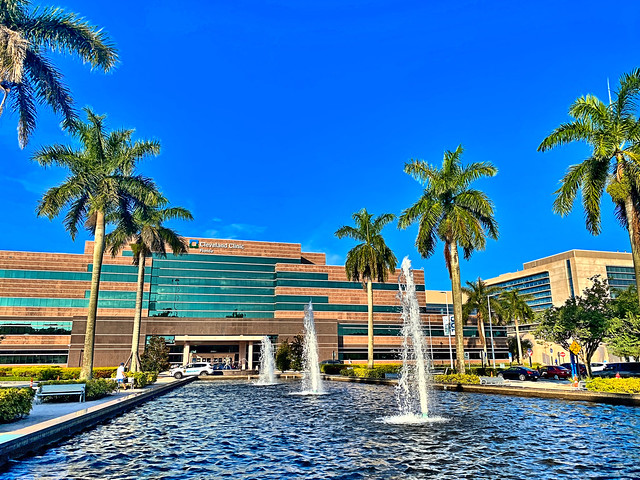