Enjoying yard birds and taking time out for a while #985

I have not gotten out into the Wounded Wetlands very often the past two weeks This has not kept me from enjoying the beauty of herons which visit our lake and often forage at the very edge of our back yard.

A Great Egret stalked and caught a small fish, which it swallowed in a blink of an eye: 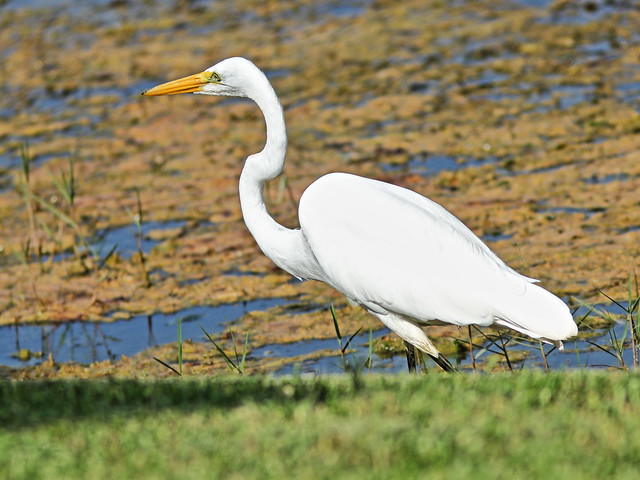 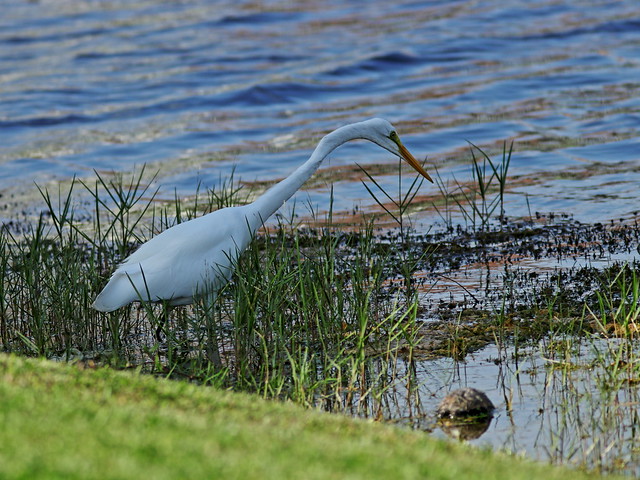 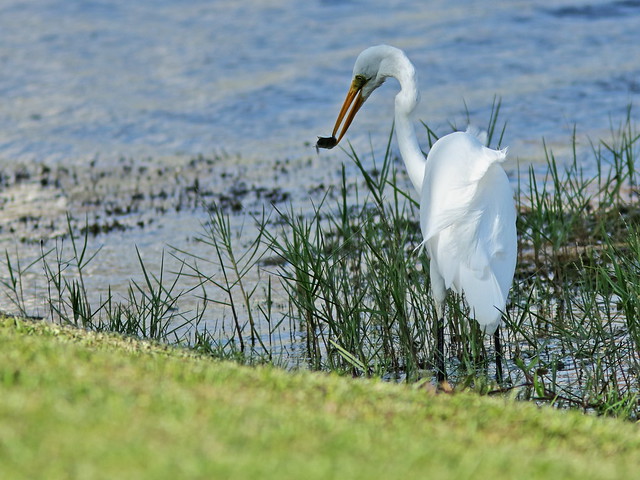 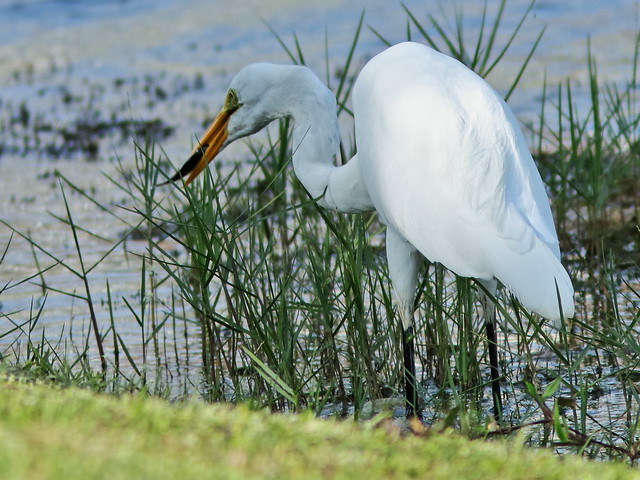 Then it hurried off to try its luck in a neighbor's yard: 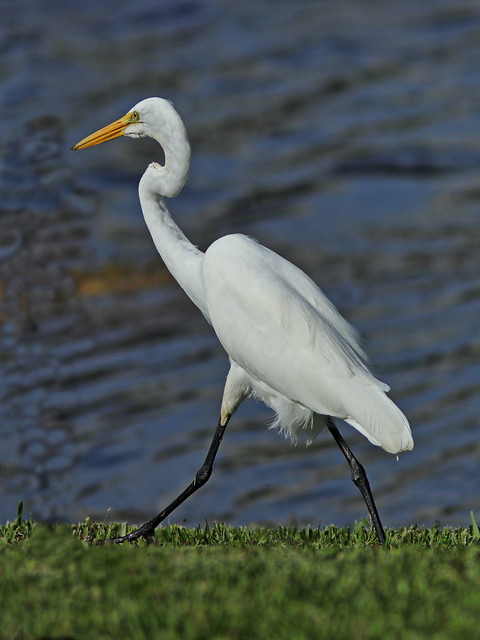 On another morning, a Tricolored Heron sauntered through with typical impatience as it darted about catching dragonflies but not a single fish: 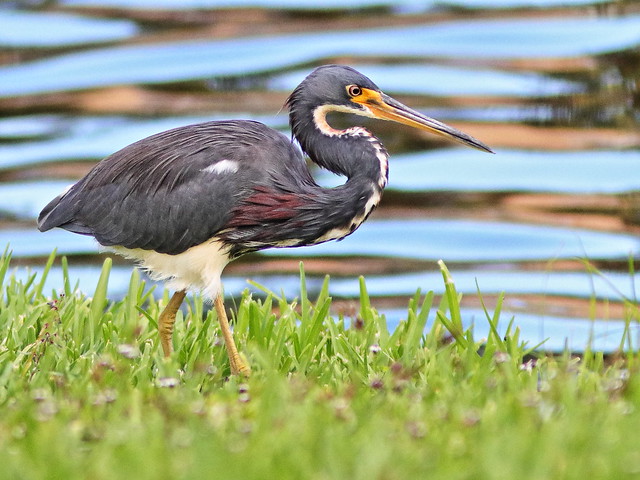 Notice how the position of its eyes can quickly adjust between a wide-angle panoramic view... 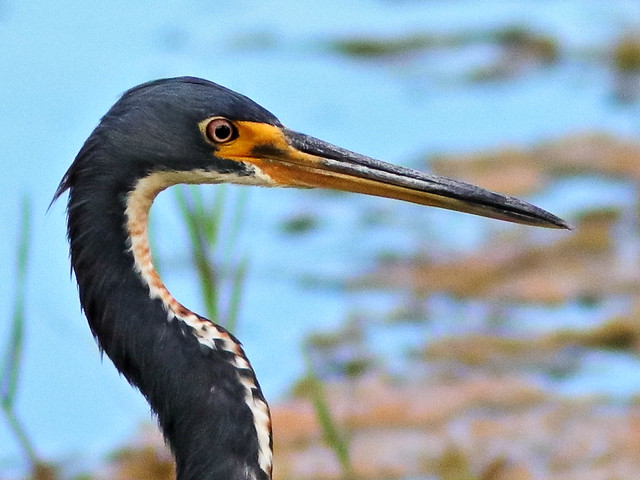 ,,,and a nearsighted focused binocular view: 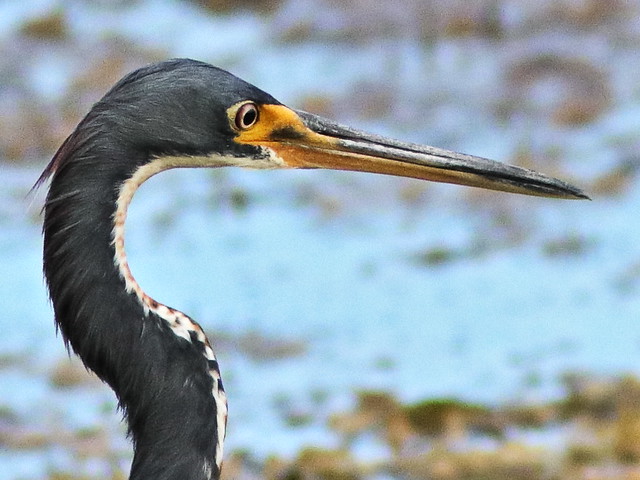 Sunlight brings out the three colors in its plumage: 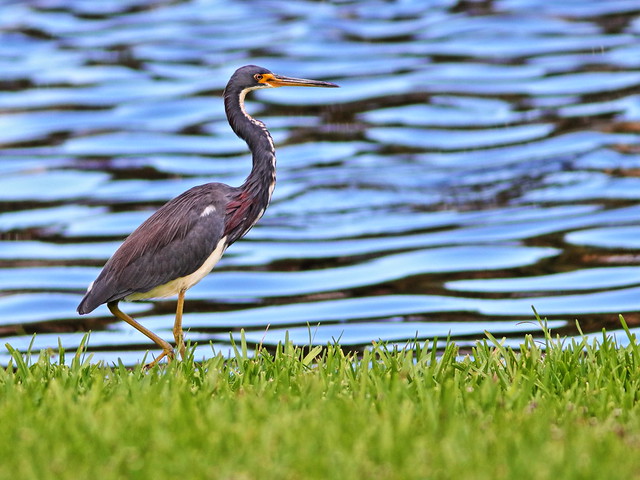 I almost missed seeing a small and furtive Green Heron as it waited patiently for a meal to swim into view: 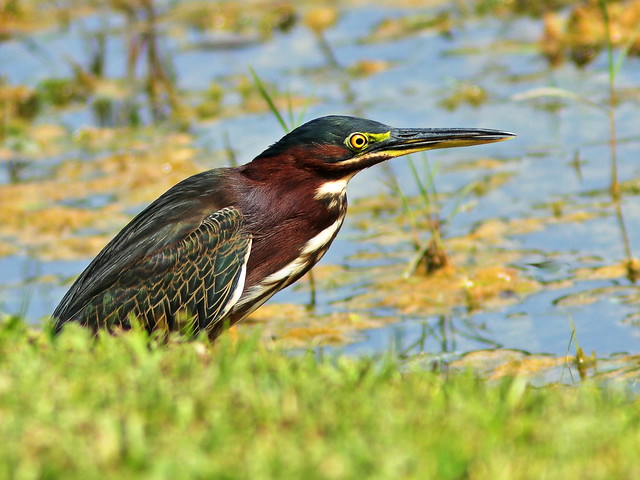 It saw me and was suspicious of my intentions: 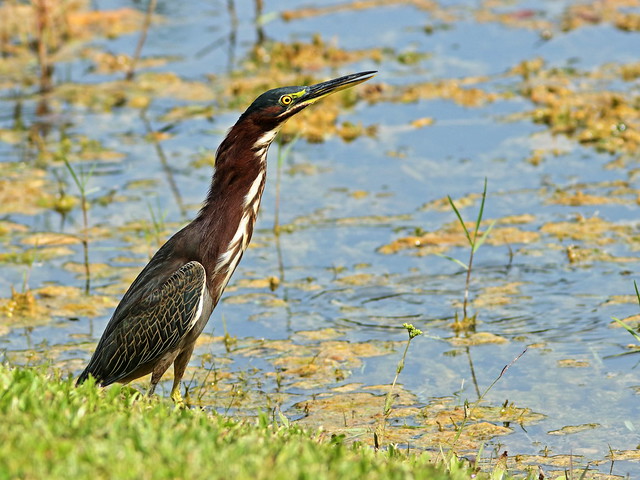 The heron looked my way and exhibited its binocular gaze. European Starlings also have this ability (*See Reference below)... 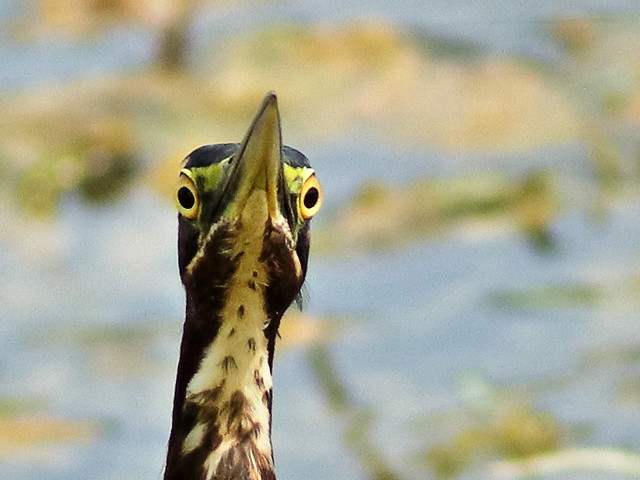 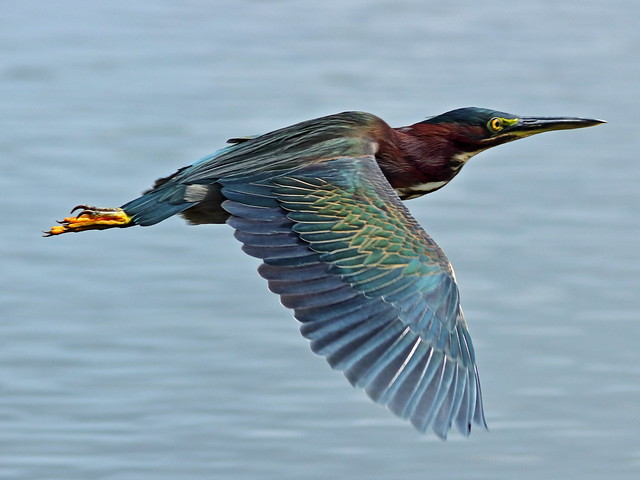 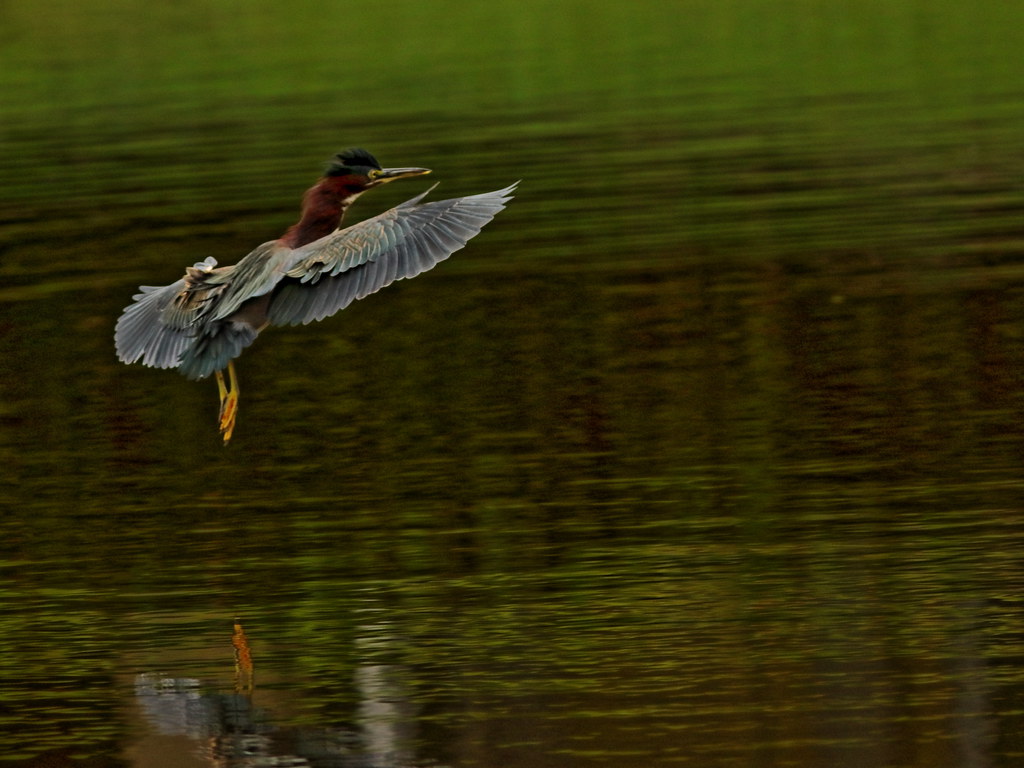 ...settling down on our next door neighbor's goose decoy: 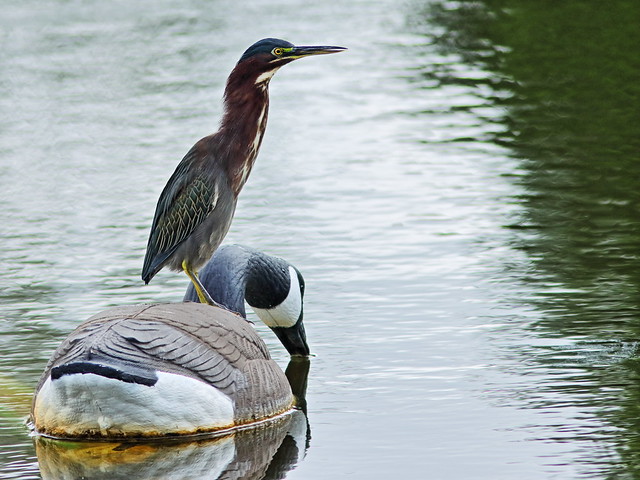 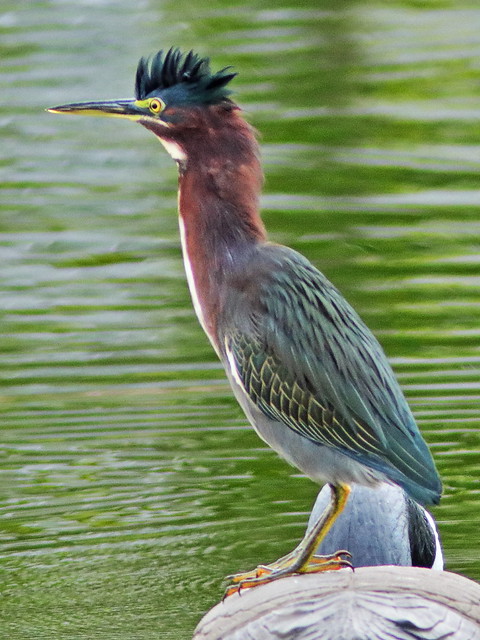 --or maybe simply meant it was time to ruffle feathers: 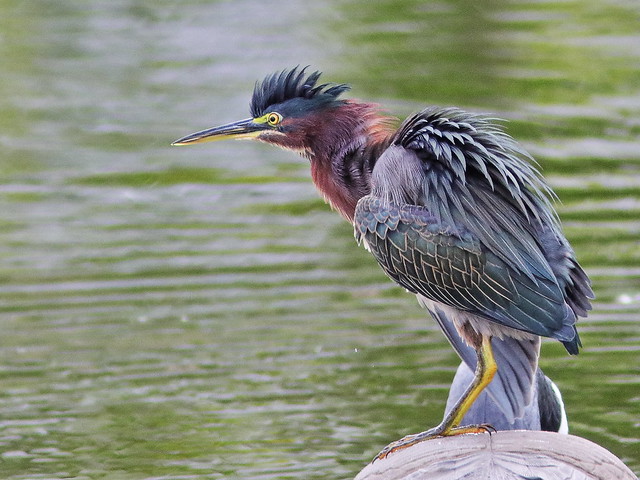 Over the past month or so I developed anemia and have experienced exhaustion when walking out in the heat of day. For two weeks I have been occupied with medical consultations and tests, a colonoscopy, CT scans and an MRI.  I got out on October 10 to watch the Sun rise, from my favorite vantage point on the lake: 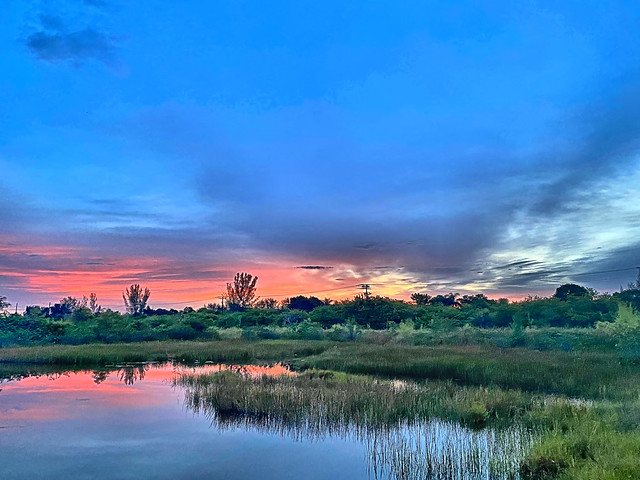 On the clear western horizon over the Everglades, opposite the rising sun, the anticrepuscular rays were less intense than when African dust was in the atmosphere, but they provided pleasant reflections on the calm surface of the lake: 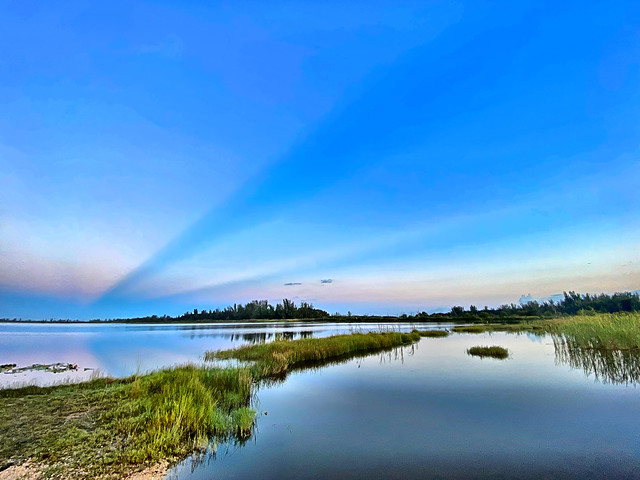 In early morning light, I captured this male Northern Cardinal amid the berries of a Trema tree: 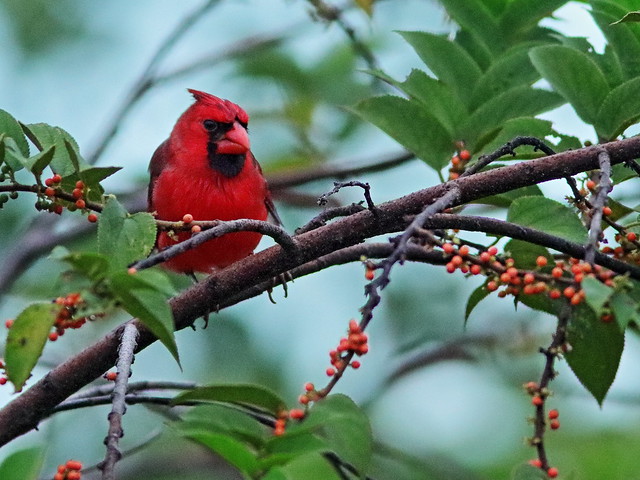 This entry should post before Thursday morning, the day of my planned surgery for newly-discovered colon cancer which has spread to two spots in my liver. Will need to give up the right  half of my colon. A hepatic surgeon will also operate to remove or ablate the two small metastatic lesions. Hopefully, all this will be accomplished by minimally invasive laparoscopic surgery.  Postoperative chemotherapy is anticipated.

I have been so gratified by the outpouring of prayers, love  and support from strangers and  friends, my children, grandchildren, siblings and extended local Cuban family. I will miss sharing photos on my favorite blog carnivals (listed below), but please do visit them. My new "home" for the next several days will be the Cleveland Clinic: 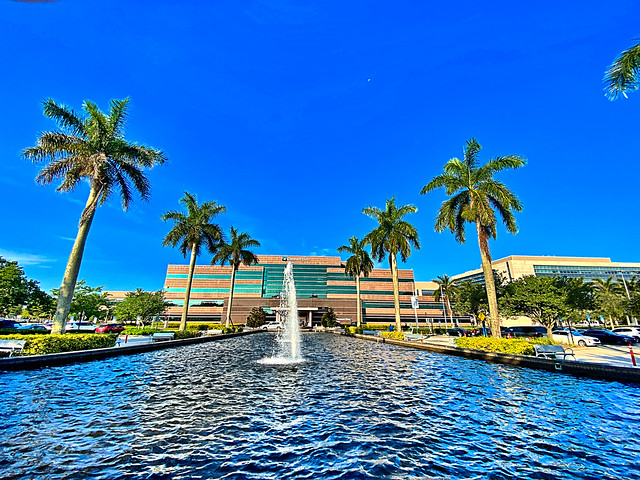 * The eyes of most bird species are fixed and cannot move around. They are positioned somewhat to the front of the head nearer the midline and may provide a degree of binocular overlap for better depth perception. This usually allows them to at least see the tip of their bills. Some birds, such as hawks and eagles as well as the herons depicted, can temporarily converge their eyes to increase the degree of binocular vision. Tactile feeders such as ibises and storks, as well as filter feeders including dabbling ducks have widely spaced lateral eyes and do not require visual control to acquire their food. Ref: https://www.ncbi.nlm.nih.gov/pmc/articles/PMC5371358/