After arriving to monitor the local Bald Eagle nest, I was getting out of my car when the female of the pair flew over my head and landed on  top of a tree just across the street. I quickly grabbed the camera and captured a burst of images as the magnificent bird steadied herself on a slender branch: 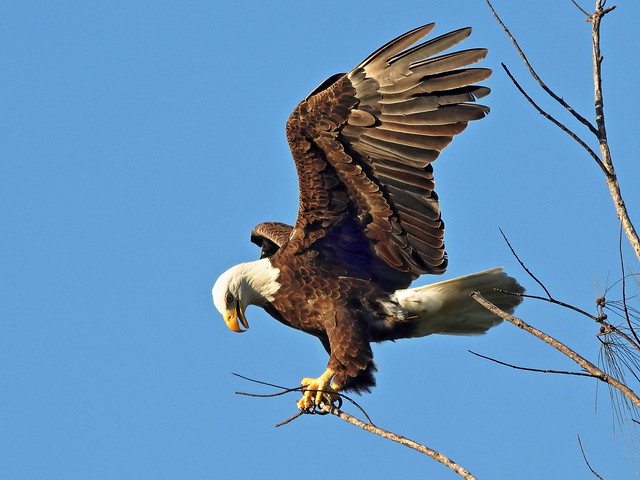 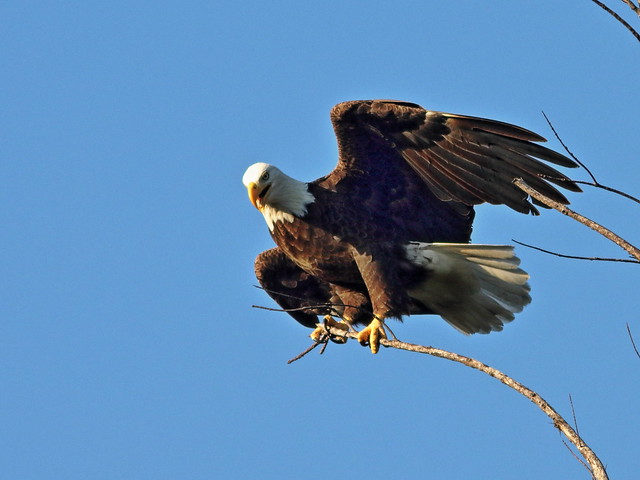 Jewel, as she is known, soon took flight and headed straight to the new nest under construction: 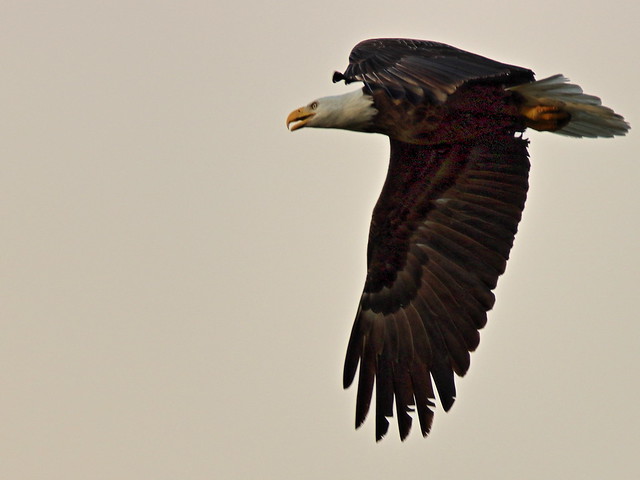 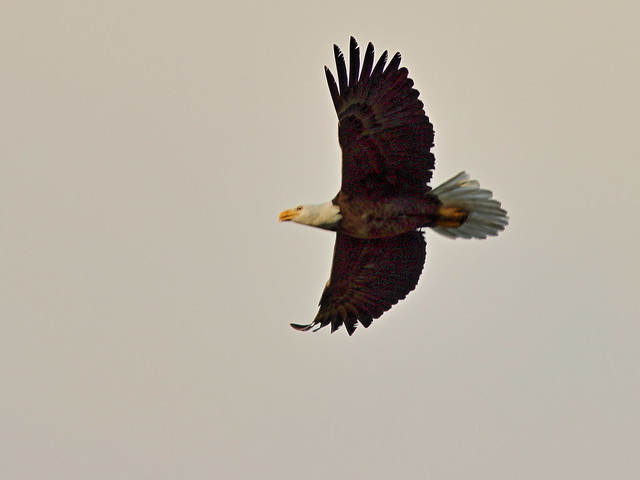 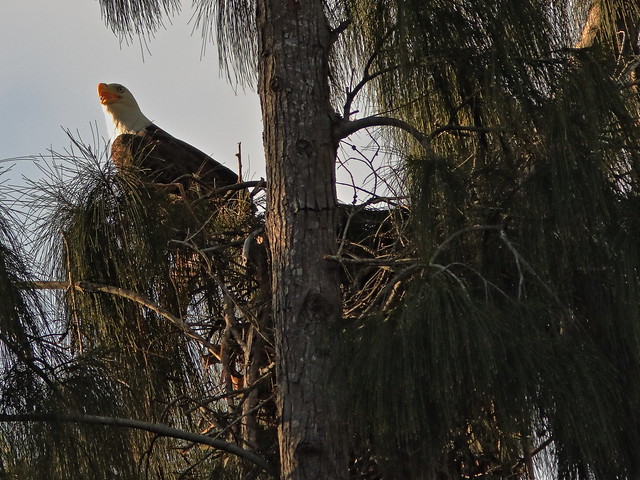 Pride, her mate, was roosting nearby: 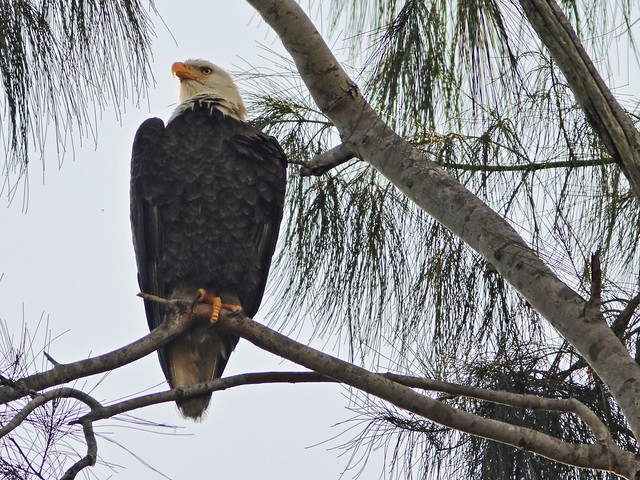 The pair has established a new, alternate nest only about 109 yards (100 meters) to the east of the old one. The latter has been used continuously for at least 14 years. It is not uncommon for Bald Eagles to change or create alternate nest sites, although some have been known to occupy the same nest continuously for over 30  years.

They presently have a new use for their old one-- it has become a cafeteria of sorts. On December 27, Pride was there, eating a fish: 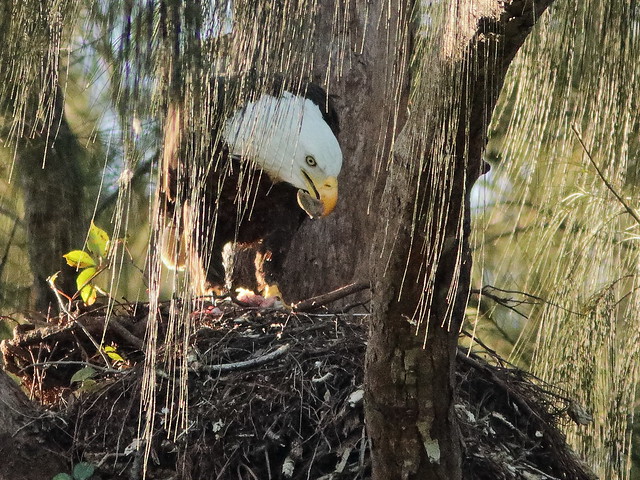 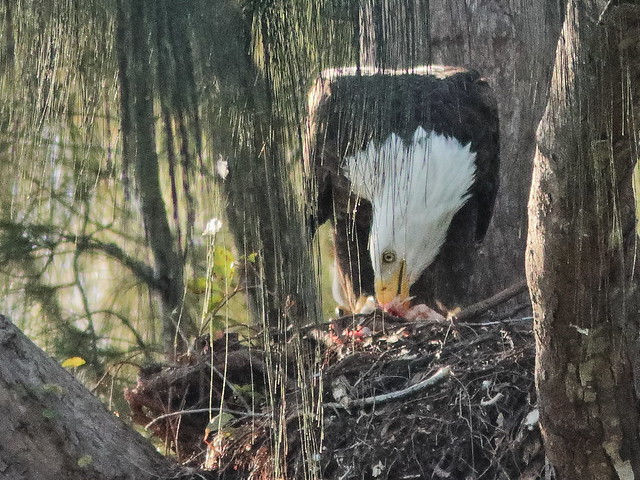 The next day, Jewel was doing the same thing: 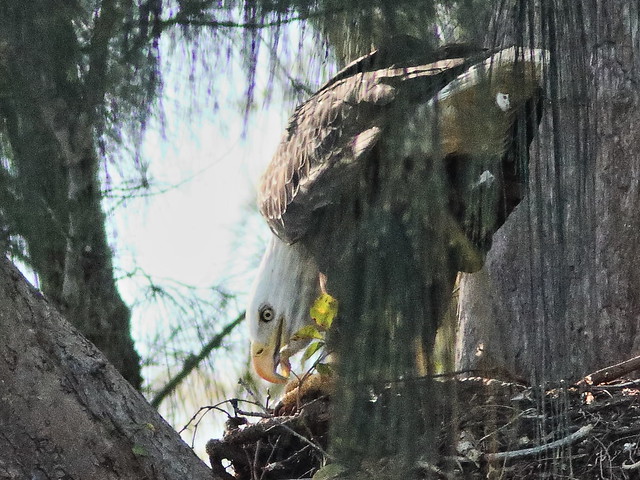 Eagles have been known to cache uneaten prey remains in a nearby location which they can watch and defend.

On January 2, both eagles got an early start on adding branches to the new nest. When I arrived at about 9:00 AM, the male (Pride) was on the nest. Several watchers had been observing for over an hour. The sky was overcast and visibility was limited, poor for photography: 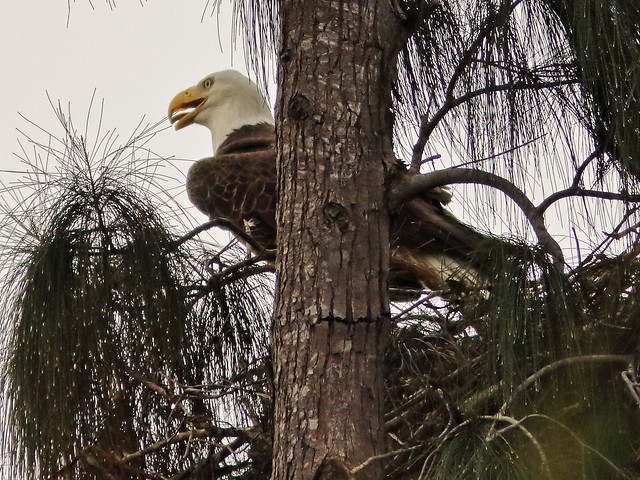 The structure has grown and now almost fills the gap between the two main support branches. The nest platform is slanted at an odd angle. Normally it would be horizontal, so it will be interesting to see how they will accomplish this: 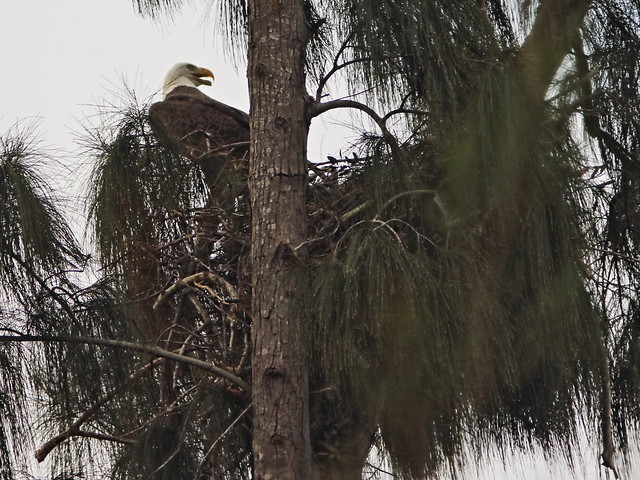 The female (Jewel) had just flown out searching for sticks. She flew up into the tallest Australian Pine along the road to the east: 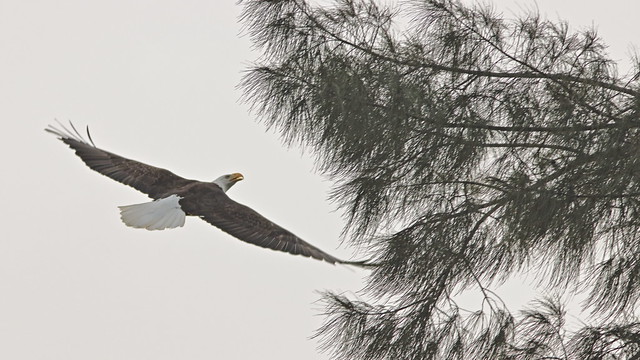 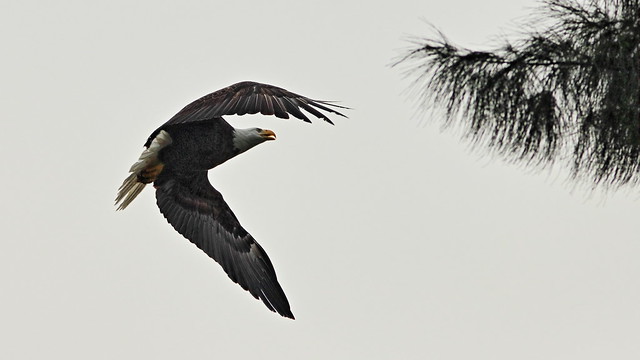 Jewel disappeared into the foliage of the tree and flapped wildly as she tried to break off a large living branch.  She was really struggling with the branch. She worked to pick it from the tree by using her weight, actually flying upside down, but the limber branch held fast to the tree: 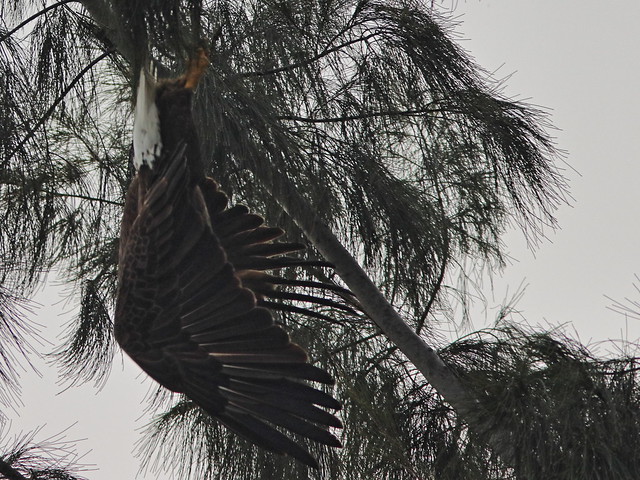 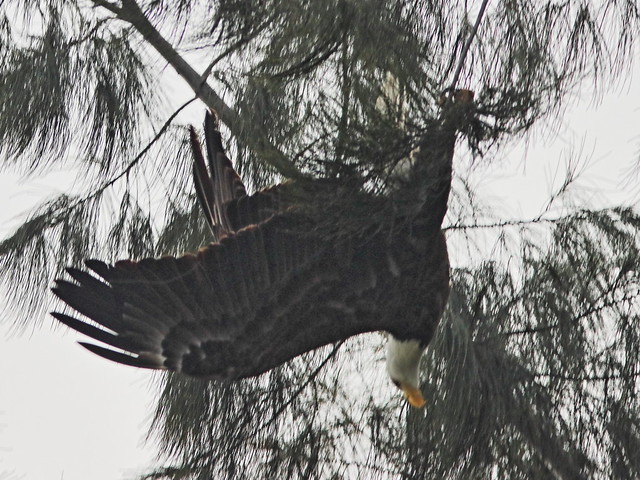 I had never seen anything like this before. She finally gave up the struggle and returned to the nest with a smaller prize: 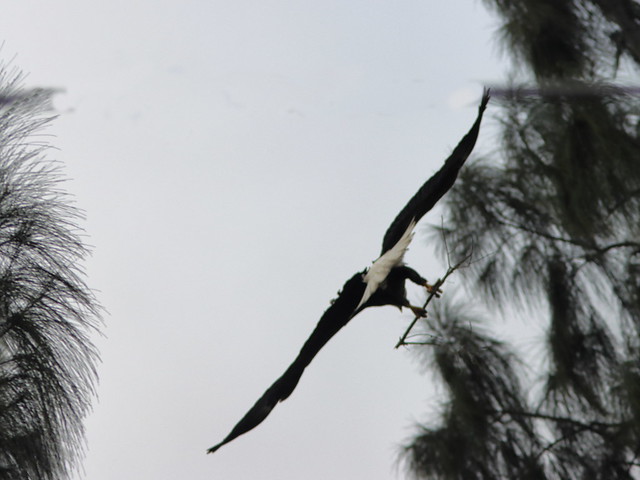 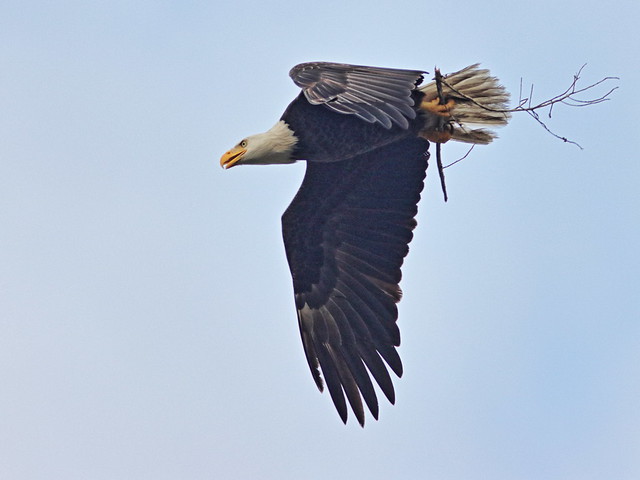 The Full Cold Moon was to set about 20 minutes before sunrise on December 29. I hurried out towards the lake... 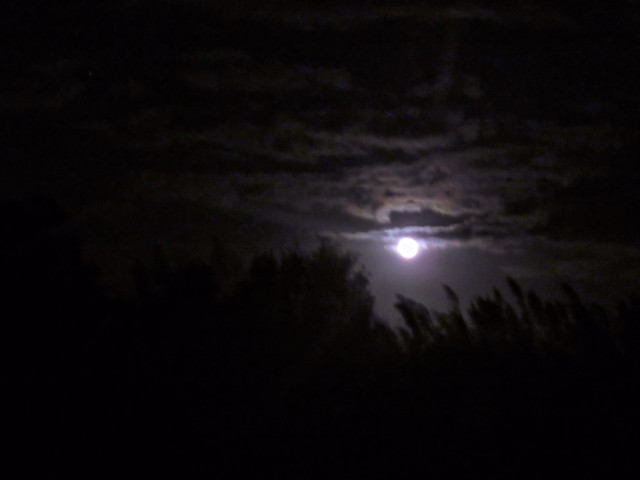 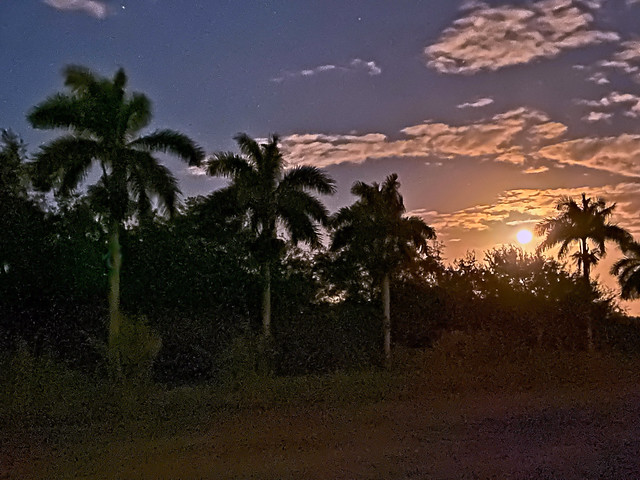 ...but only about 10 minutes before it was to touch the horizon just to the left (south) of the Pine Bank, clouds  moved in and  spoiled the show: 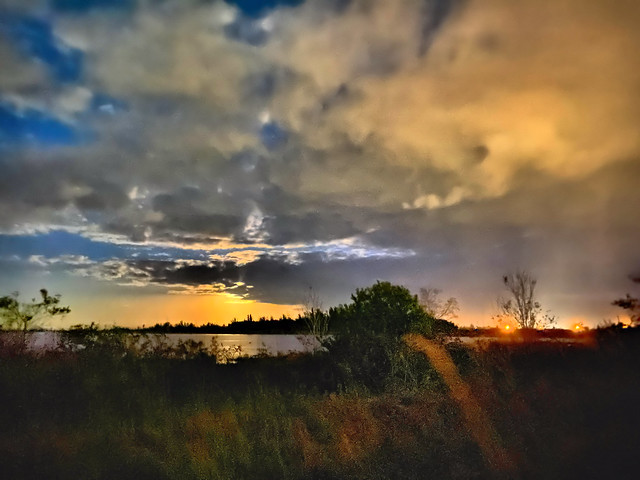 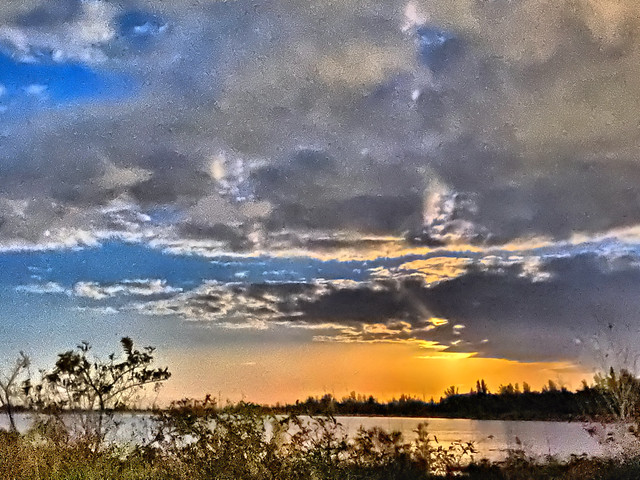 I gave up hope of seeing the Moon again and continued walking to the north. To my surprise, the Moon appeared on the other (right) end of the Pine Bank, below the clouds for an enchanting minute or two: 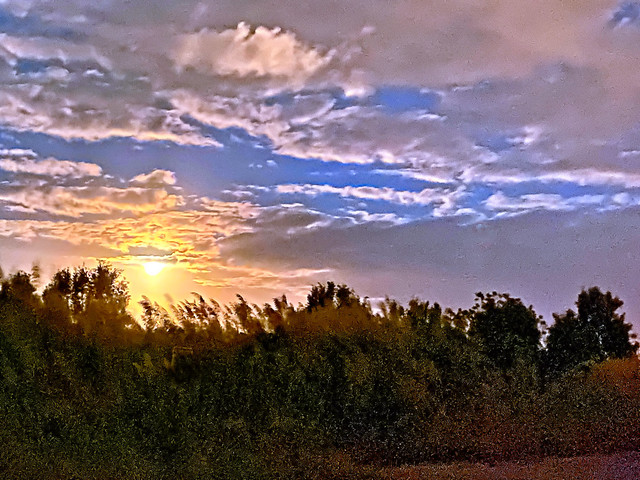 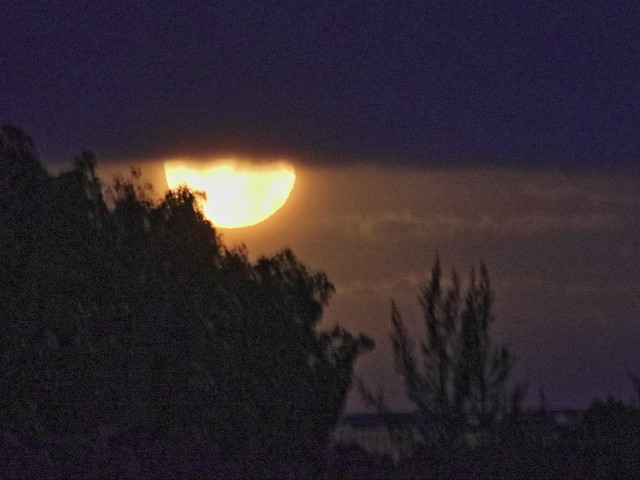 A Great Egret posed against the pre-dawn sky: 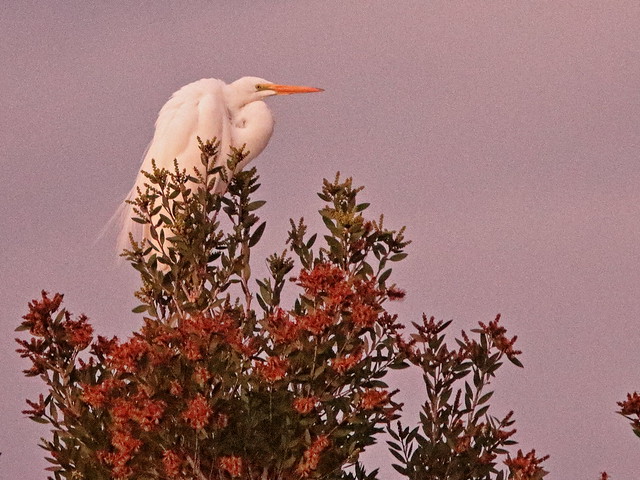