Crops & Clips: Shots in the dark

Getting out into the local Wounded Wetlands so early makes us more conscious of celestial events. A meteor shower is an excuse to stop and look up. The phases of the Moon are interesting. The full Moon casts long shadows and can be so bright that it causes night blindness. The surroundings look much darker as our pupils constrict in reaction to the glare.

For two or three days after its rising, the full Moon can provide a backdrop for early morning bird photos.

Around sunrise, several male Boat-tailed Grackles gathered together in a bare tree. During the non-breeding season the males flock together separately from the females and compete for dominance in elaborate displays. The dominant males will join the females who occupy the breeding territories. Although males who are lower in the hierarchy may also join the colony, only a few of them will succeed in mating within the harem.

Here, the dominant male is probably the one highest in the tree: 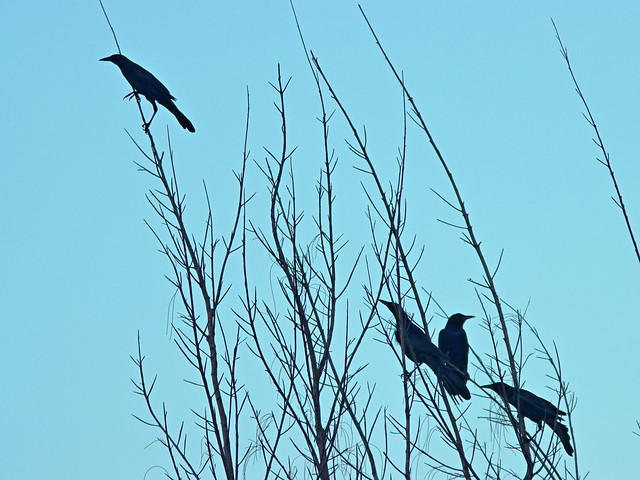 The "top" male ruffles and rattles his feathers and snaps his bill, calling out harshly in a loud, long and varied non-musical "song:" 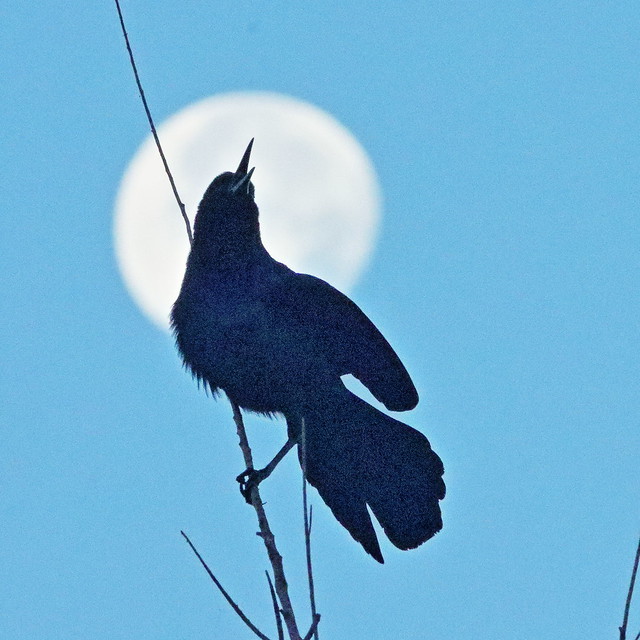 Part of the males' dominance display involves pointing the bill straight up. The competitors seem to take turns doing this while screaming all the louder. They may come to blows, or a challenger may be chased off. A single alpha male may remain lord of the same colony for several years. 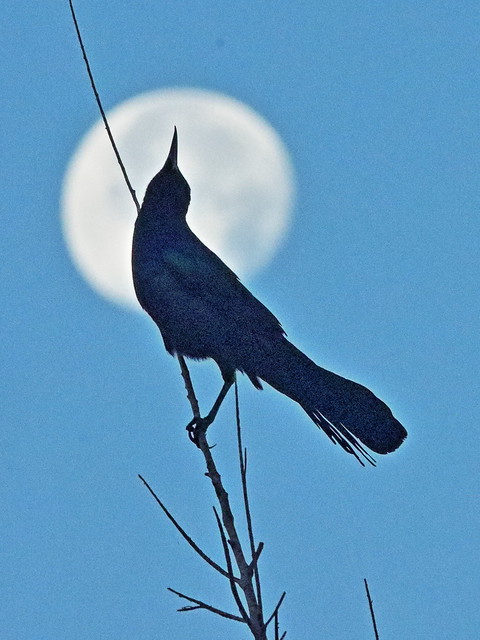 Since the Moon was quite high, I had to creep up nearer through the brush (watching out for snakes and hoping my intended subject would not fly off) to get these shots-- 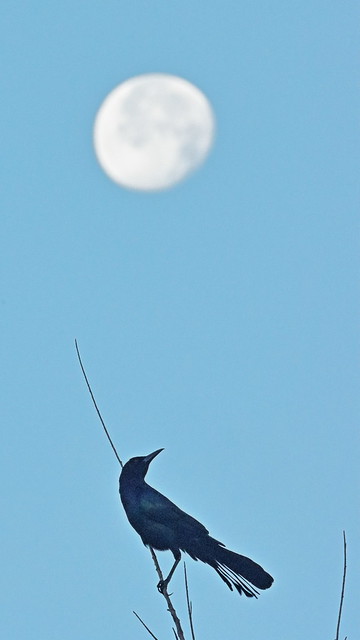 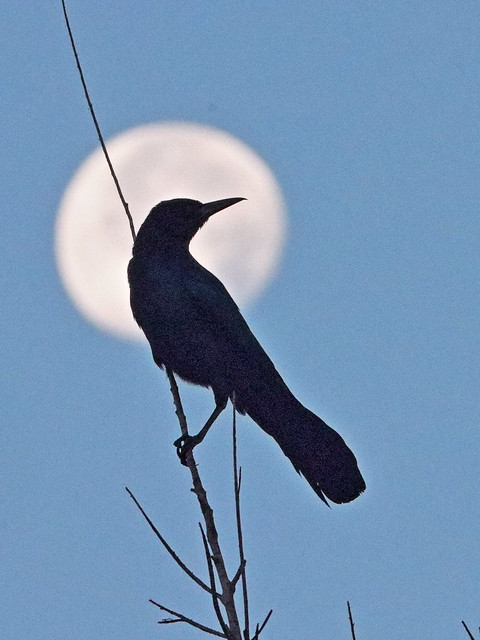 A Northern Flicker, illuminated by flash, provided another "Moon shot": 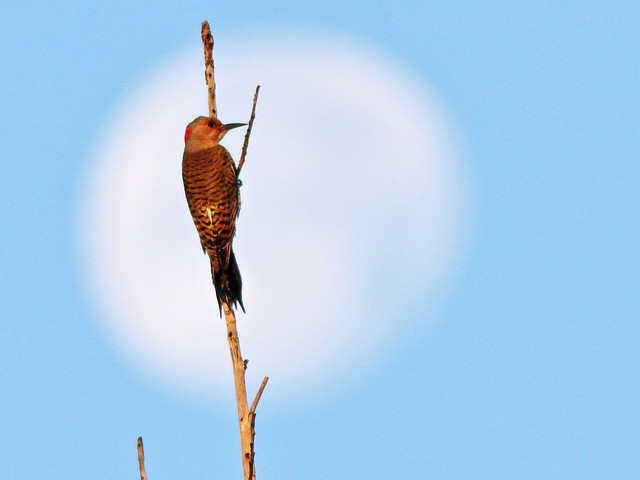 Before sunrise, I snapped a photo of a Yellow-crowned Night Heron as it passed over Planet Venus (out of focus but conveniently appearing larger): 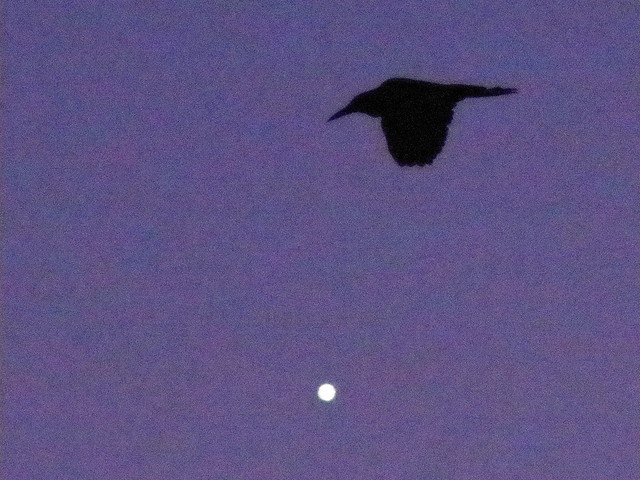 I used fill flash to capture this Great Egret on the lake before sunrise: 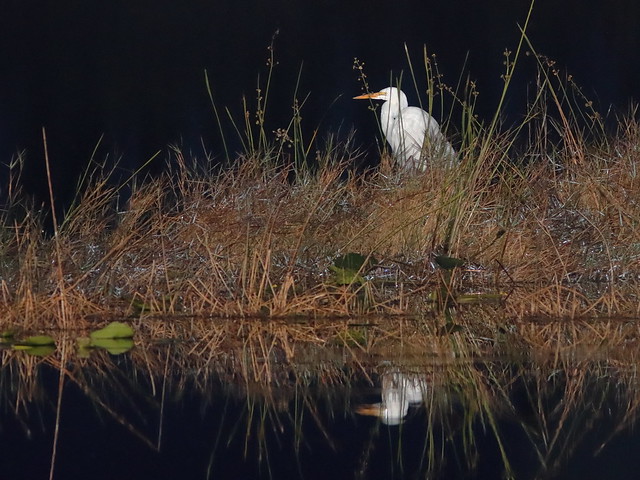 On a foggy morning, a Great Egret settled down : 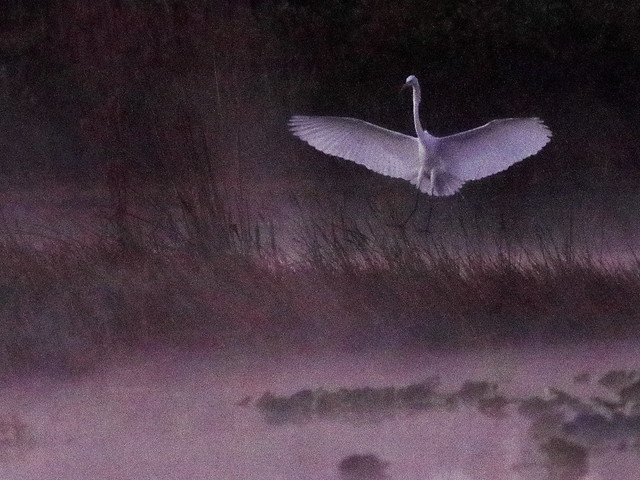 Imitating reality, I layered a flock of White Ibises over an image of the full Moon: 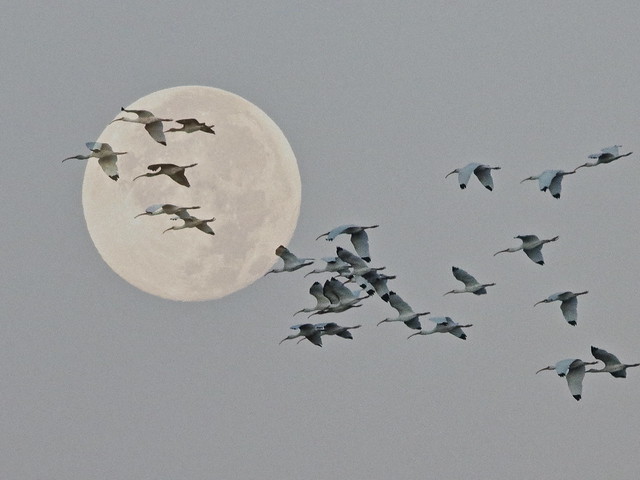 The Moon is an interesting subject even as it wanes towards its final quarter. Sunlight catches the high tops of the mountain chain (Montes Caucasus) which partially surrounds the right upper part of the second largest lunar "sea," the Mare Imbrium (sea of Showers): 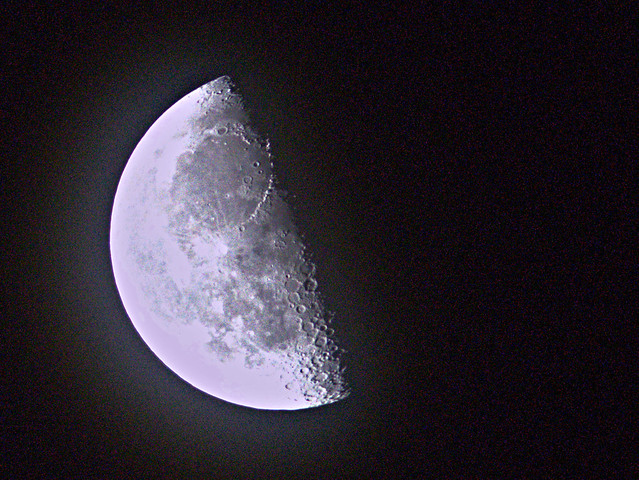 A very old Moon peeked through the clouds on January 11: 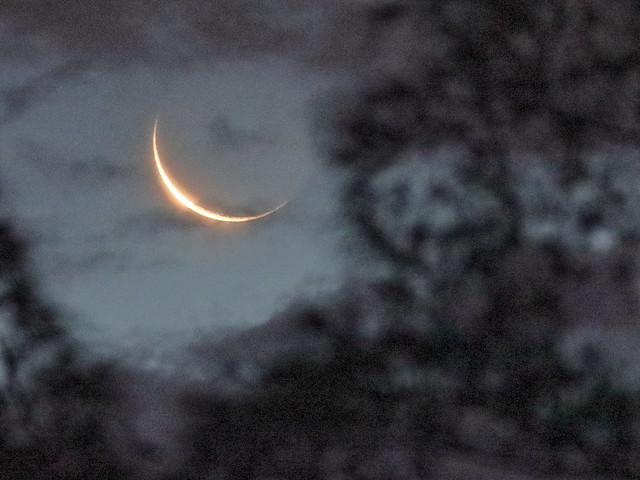 Another advantage of getting out early is witnessing the sunrise:. 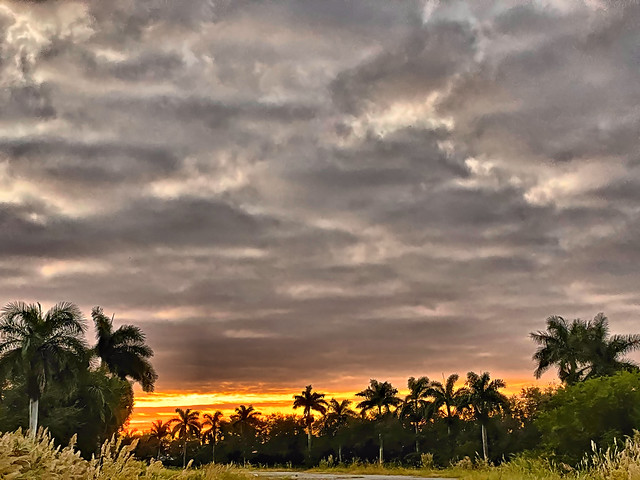 We usually only see the western horizon at dawn, but I decided to set out on the Levee Trail, which runs along the canal and provides a view of the eastern sky. On January 9 I was richly rewarded. This is a view to the south: 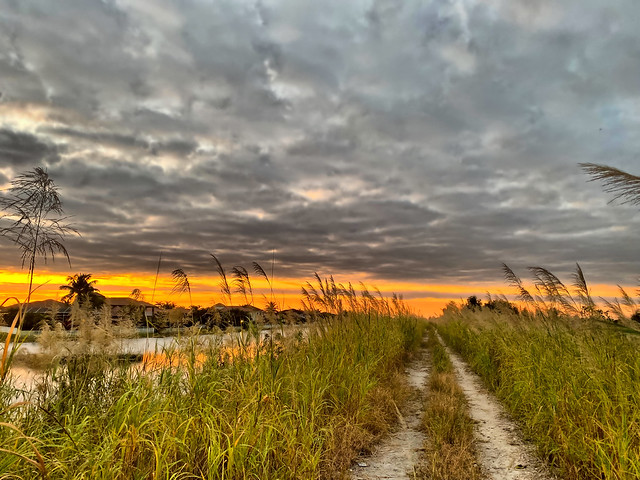 The foliage along the bar ditch was turned into gold by the early morning rays: 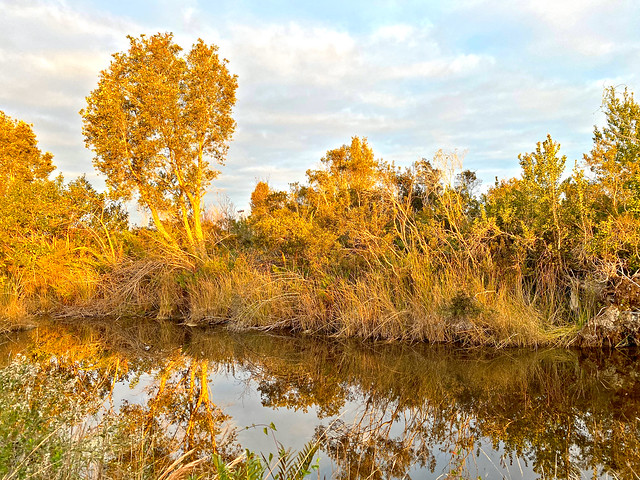 The best bird of the morning was a male American Robin. If lucky I may see one or two each winter, although they twice appeared in  large flocks. He called continuously, as if seeking to find others of his kind: 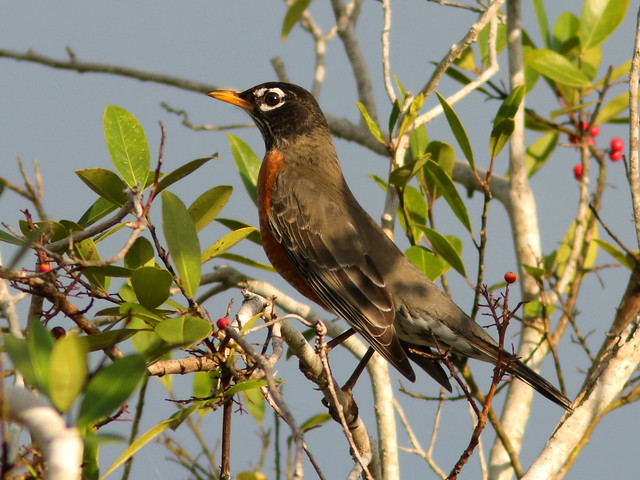 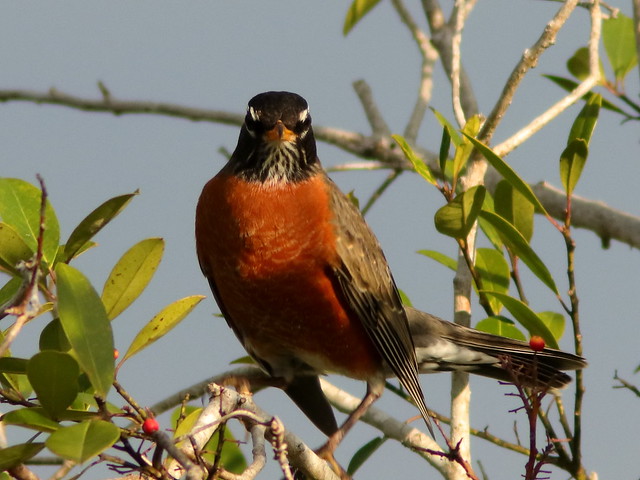 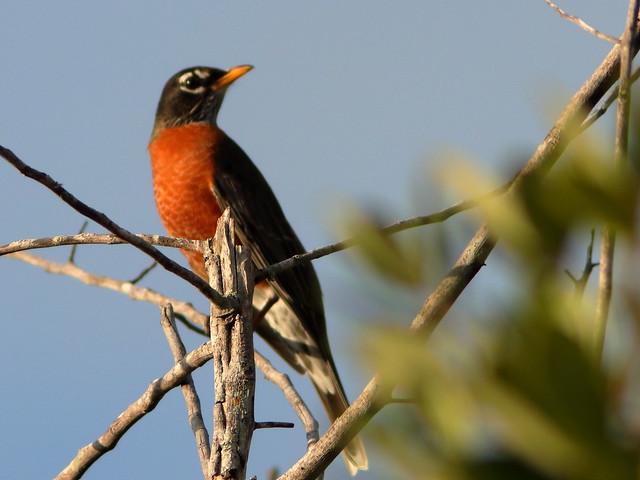