As I mentioned in last week's post, we were very anxious to get back out into our local south Florida wetlands after spending six weeks at our second home in the Chicago area. Mary Lou particularly values the fresh air and exercise, while I adopt a more leisurely pace, often covering more ground but over about 2 hours instead of 30 minutes.

This photo was taken about an hour after sunrise on November 5 after a cold front moved in and pushed the overnight temperature down to a chilly 57° F (14° C): 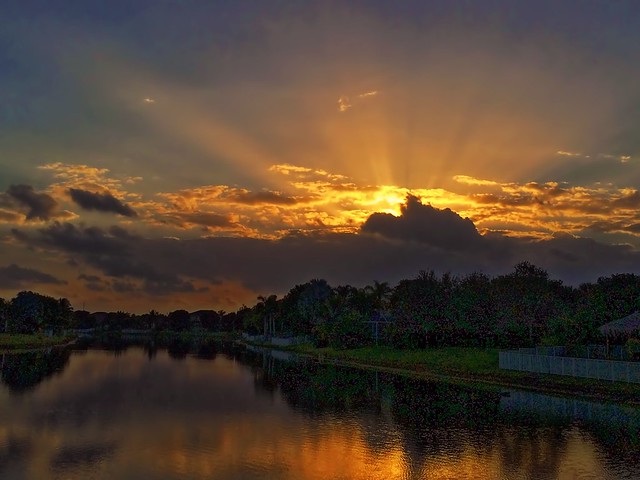 When I go afield I am not looking for the rare and unusual birds, although they are welcomed when they appear. Over almost ten years of birding this local patch, I have identified 142 species no more than a mile from my home within the confines of the West Miramar Water Conservation Area, photographing nearly all of them.

Only a few were new to my life list (such as Black-whiskered Vireo, Short-tailed Hawk and Bell's Vireo) and two or three are considered "non-countable" by the American Birding Association (feral Muscovy Duck, captive-reared freely-released Whooping Crane and Greater Flamingo-- the latter I maintain represented a wild flock driven by hurricane winds from their usual haunts 100 miles to the south in Everglades National Park). Yet, because I did not get my first DSLR camera until a few years ago, many provided my first photo opportunities-- events that enliven the spirit of discovery.

The waning full moon had not yet set. Mary Lou was already out in head of me. 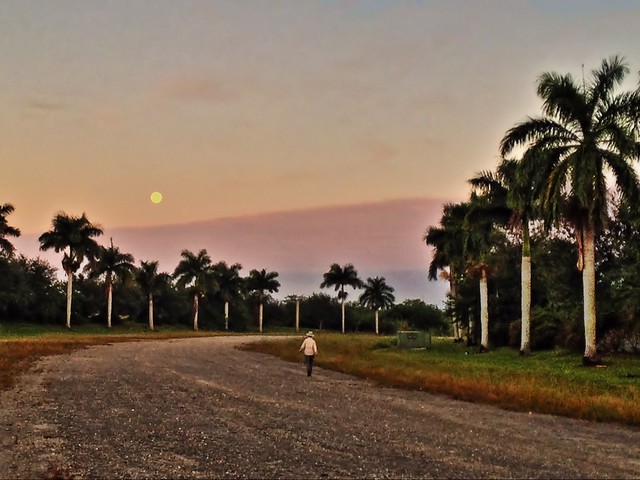 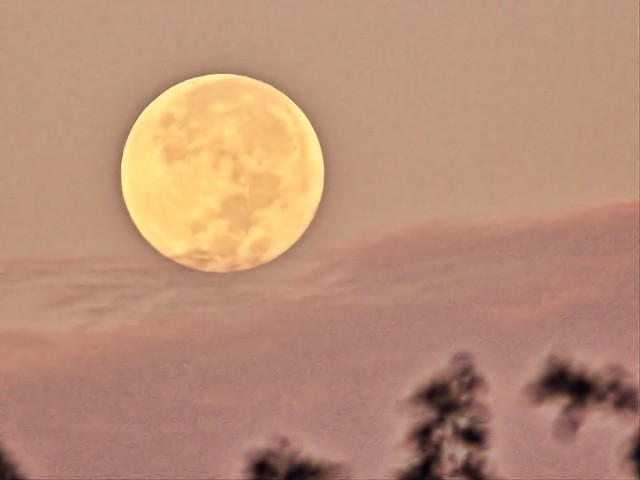 We got out just before sunrise the first morning. As we entered the gravel path, the sun was just high enough to catch the undersides of a Wood Stork as it flew over us. 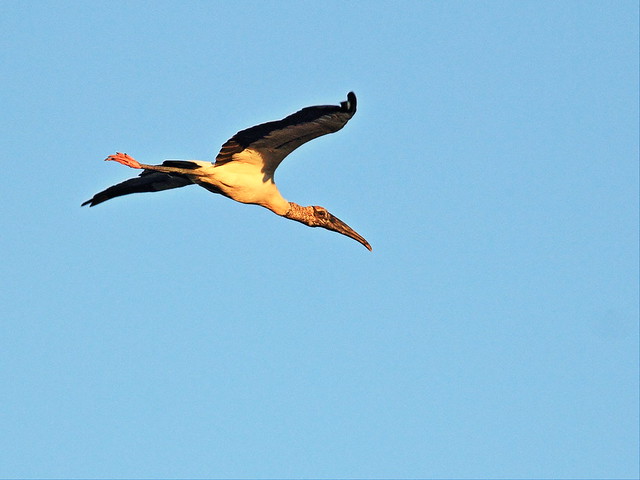 The morning glow added beauty and defintion to the white plumage of this Great Egret as it responded to my presence by moving away a bit: 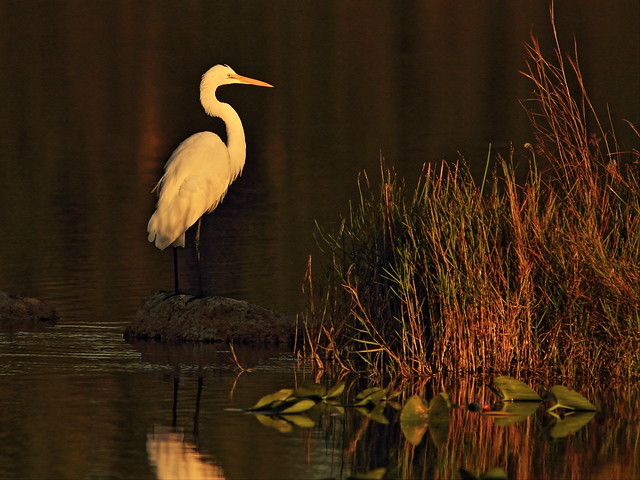 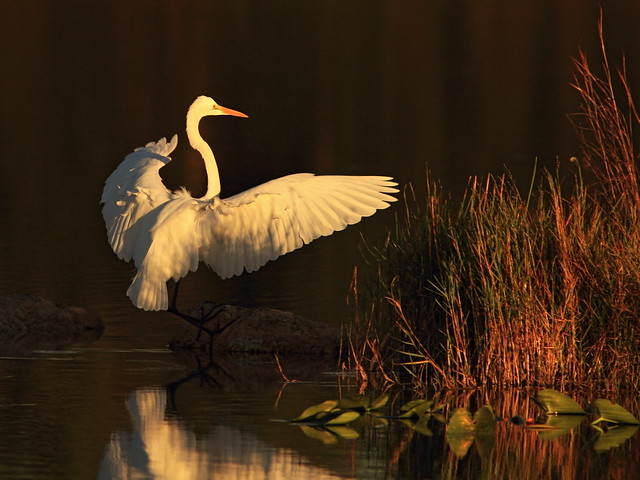 Nearby, an Anhinga protested as I drew near: 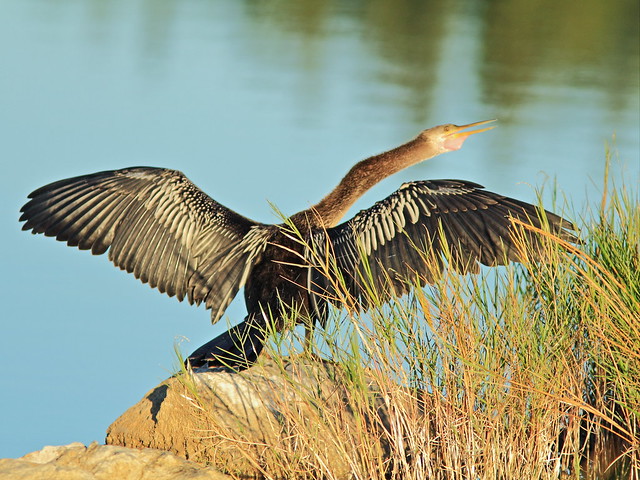 At dawn the sunlight cast long shadows on the ground but fully illuminated the clouds above the lake: 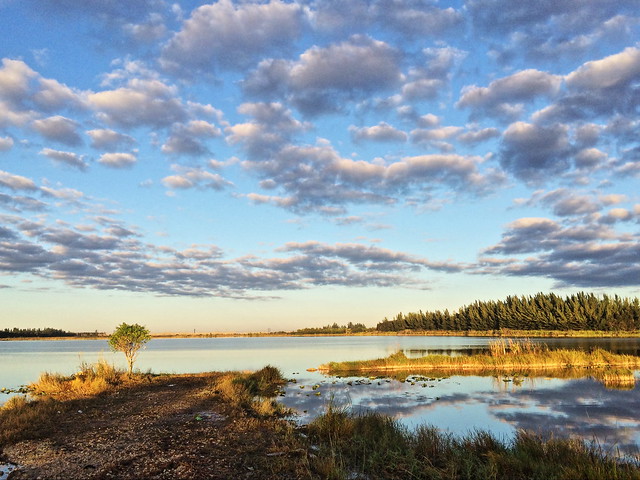 All was not beauty and splendor. Water levels decreased somewhat after the end of the wet season in mid-October, so the off-road ("wreckreational") vehicles had free access to the "protected" wet meadows. This is their playground where they can spin their wheels and cover each other in mud: 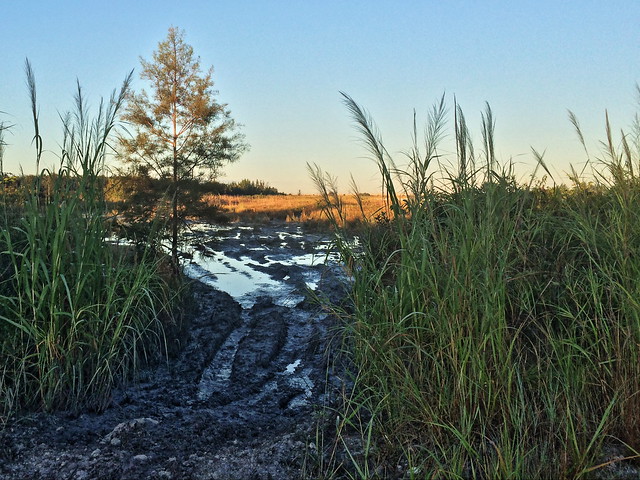 Unknowingly benefiting from their intrusion, wading birds were afforded new waterways in the ruts and potholes created by the ORVs. A pair of White Ibises probed the mud puddles: 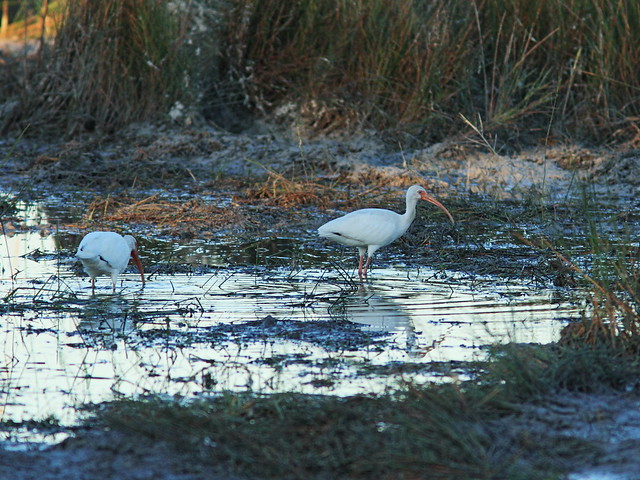 It was a joy to hear the familiar sound of an Osprey calling overhead: 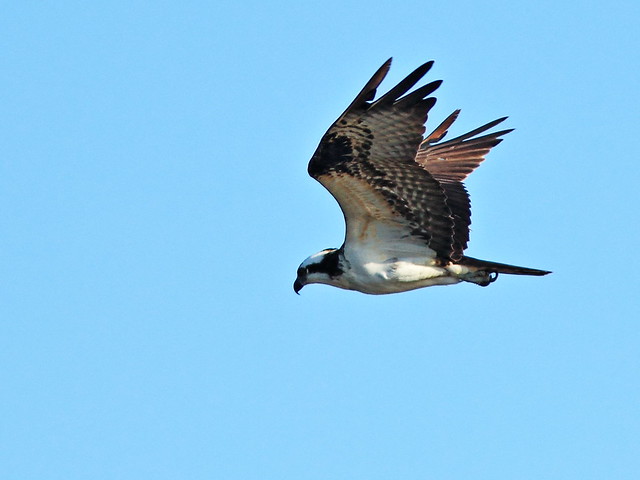 A Little Blue Heron and a Great Egret moved towards a disturbance in the water. 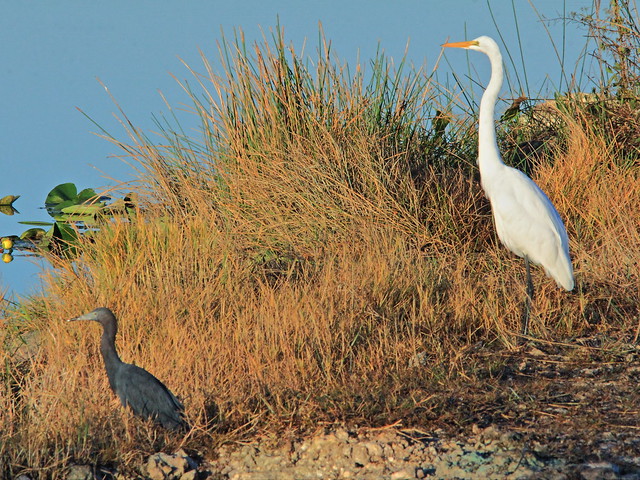 The Little Blue flew offshore to an exposed rock: 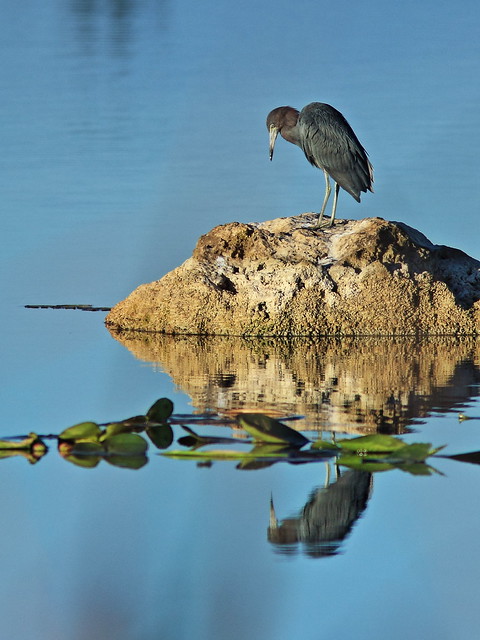 I checked out the shrubby area on higher ground next to the levee. Gray Catbirds had already migrated out of Illinois before we left. Here they were the most common land birds. Despite their numbers and constant mewing calls, catbirds are shy and do not sit still for a photo. When one lands out in the open it is almost guaranteed to disappear into the foliage within seconds.

The catbirds outnumbered the abundant Northern Mockingbirds such as this one: 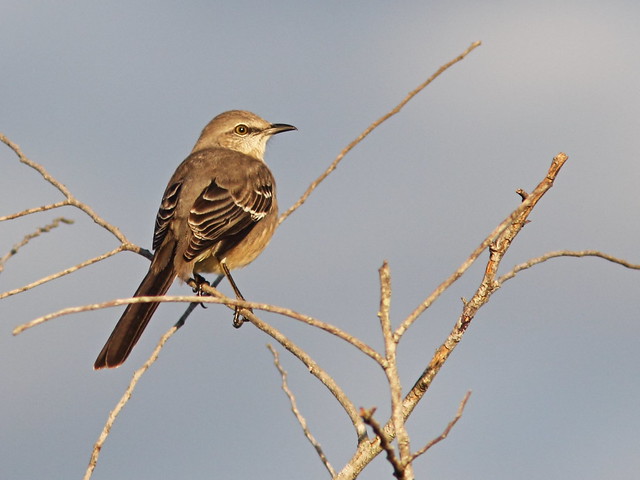 This catbird ducked away, but not before I caught sight of its conspicuous rufous under-tail coverts: 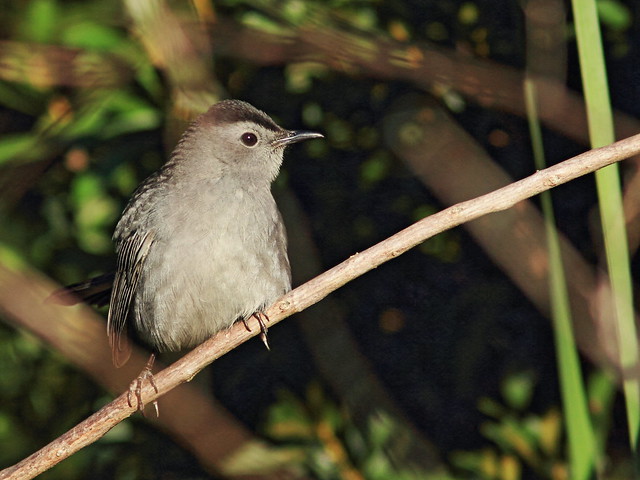 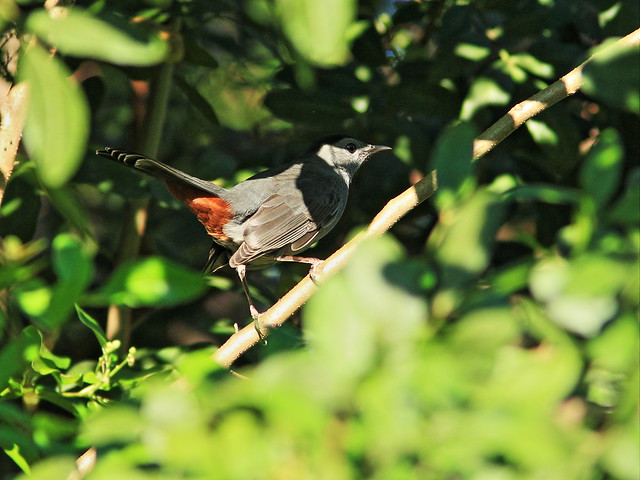 Another member of the Mimic Thrush (Mimidae) family that includes mockingbirds and catbirds put in a brief appearance-- a Brown Thrasher: 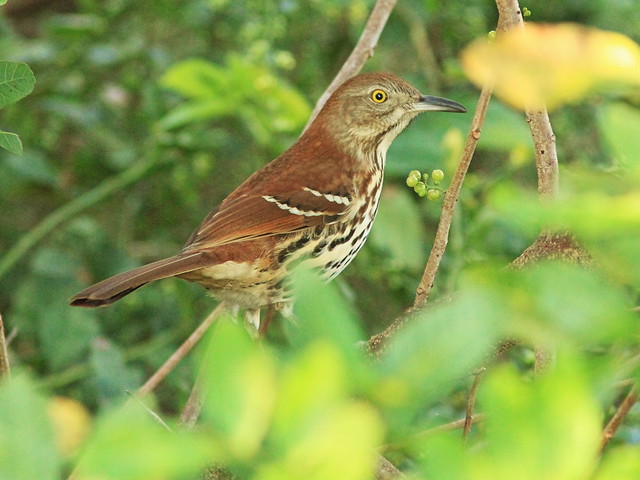 All in all, I recorded 45 bird species during the first three mornings out in the local wetlands, but non-avian wildlife, such as this Monarch butterfly did not escape notice: 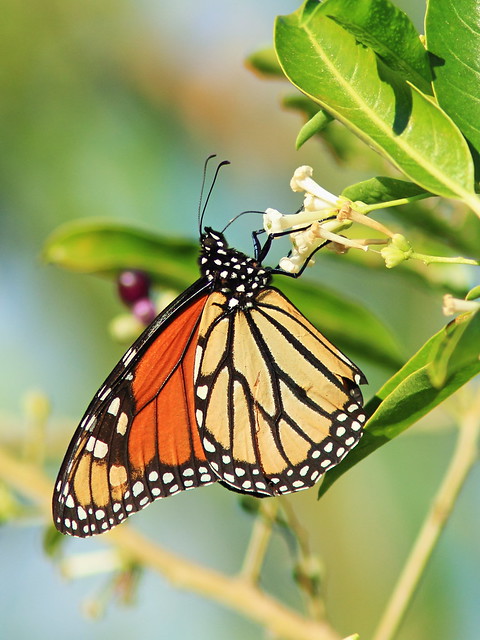 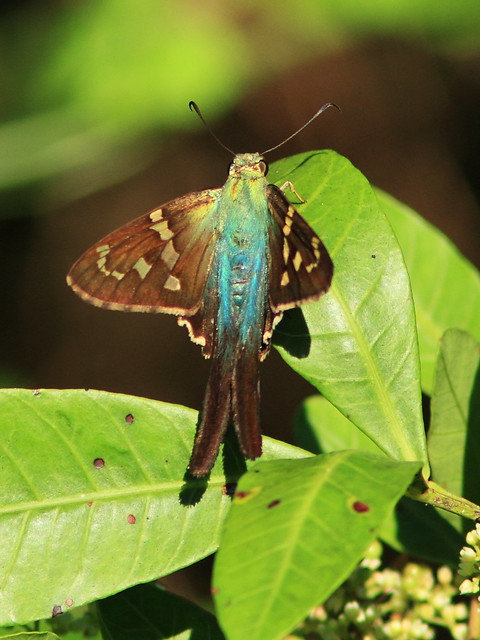 Posted by Kenneth Cole Schneider at 7:10 AM