The local Bald Eagles' new nest containing two 5 week old eaglets was damaged by a severe thunderstorm on Sunday, April 11. The next morning a portion of the right (west) side of the nest had fallen. A week later, while I was away in Illinois, on April 19, the nest split into two pieces which fell a few feet down from its original spot in the "V" formed by two large branches of the tall Australian Pine. (Note important UPDATE at the end of this post).

The smaller eaglet of the two fell to the ground and was rescued. It suffered minor injuries but is doing well at the Pelican Harbor Seabird Station rehabilitation facility in Miami. The older eaglet (presumably a female based upon its size) is active and healthy, occupying the lower remnant of the nest, behind and just to the left of the main trunk. It was hatched around  March 5 or 6th, so she is 57 days or nearly 8 weeks old. Normal fledging age is about 10-13 weeks of age. At this nest site, fledging of the first eaglet occurred as early as 68 and as late as 86 days after hatching. (average 76.5 days with a median of 73 days).

This part of the nest appears to be supported by smaller branches and some of the long sticks from the original nest. We watched as it was being fed a large fish carried in by the female parent. I only was able to capture a few poor photos of the eaglet, as it was mostly hidden by the debris from the nest.

I arrived at the nest yesterday ( Wednesday) at about 8:15 AM and found the adult female (Jewel) roosting in the usual spot in the tall pine just east of the nest tree. 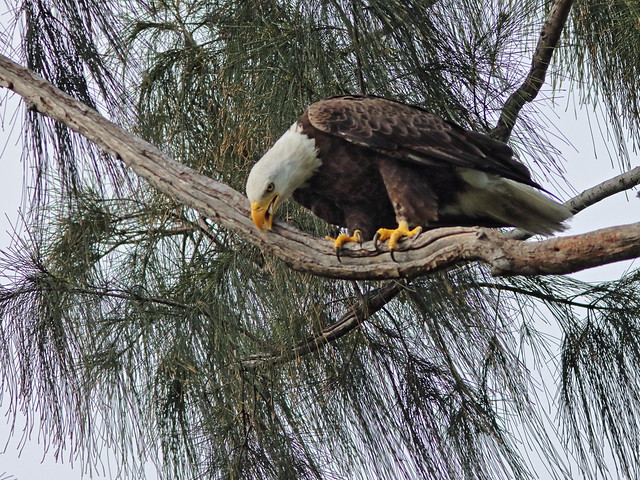 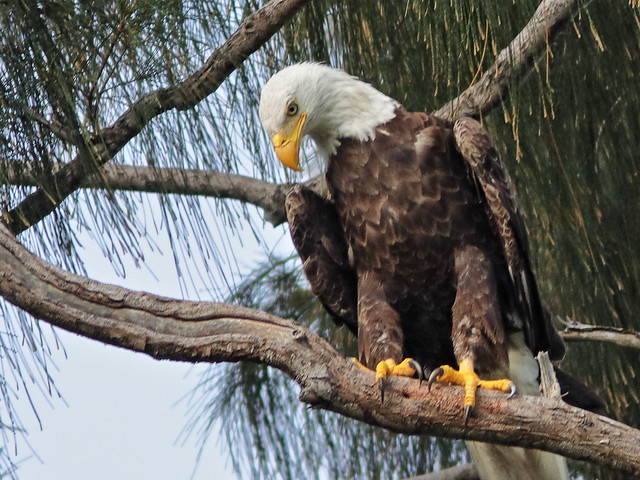 Almost immediately, the male (Pride) flew in and fed the eaglet, which called out incessantly. The eaglet is out of sight in this view, hidden by the left half of the remnant nest: 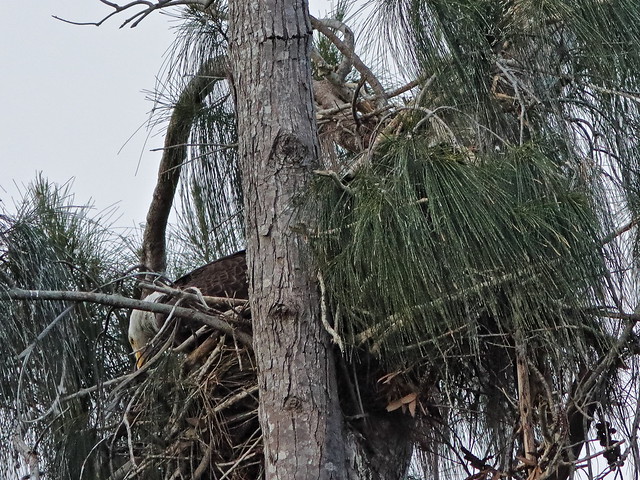 Jewel then flew off and things were quiet until about 9:50 AM, when she arrived from the north carrying a large fish. 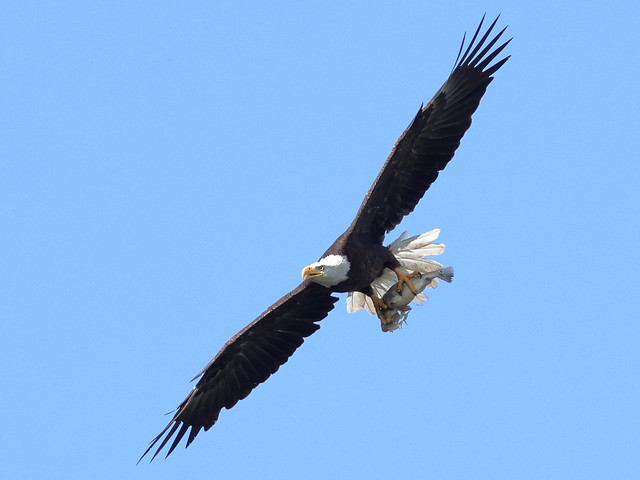 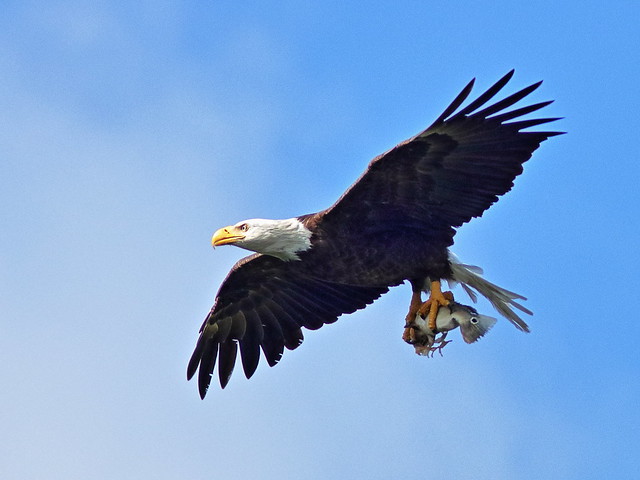 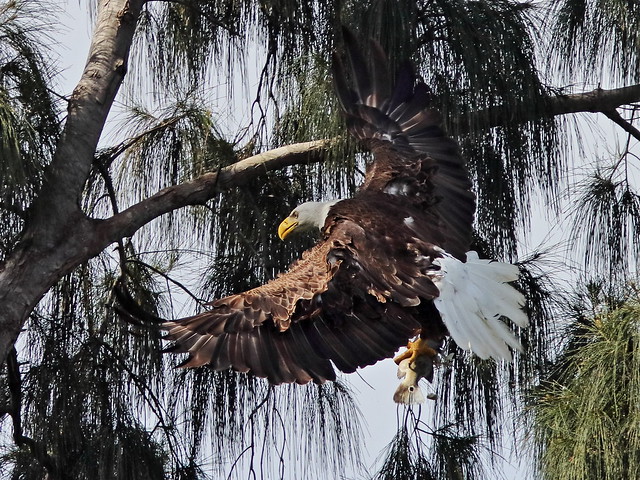 She fed the eaglet which was rather precariously perched below her on the very edge of the sloping lowest portion of the left nest fragment. The eaglet's tail and wing feathers extend to the left beyond most of the nest structure, and her head can be seen as she crouched down, next to the tree trunk: 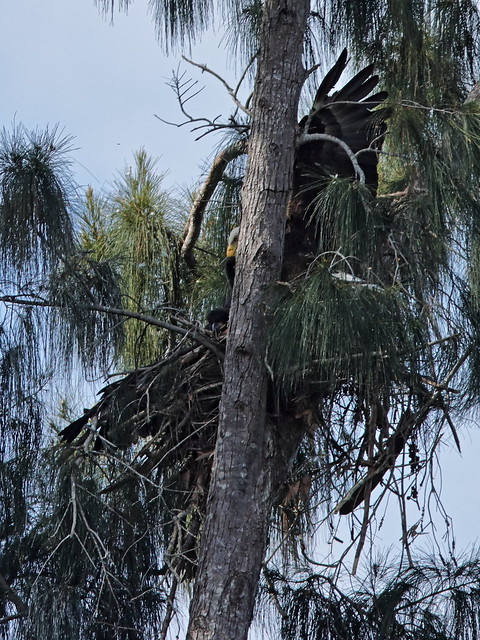 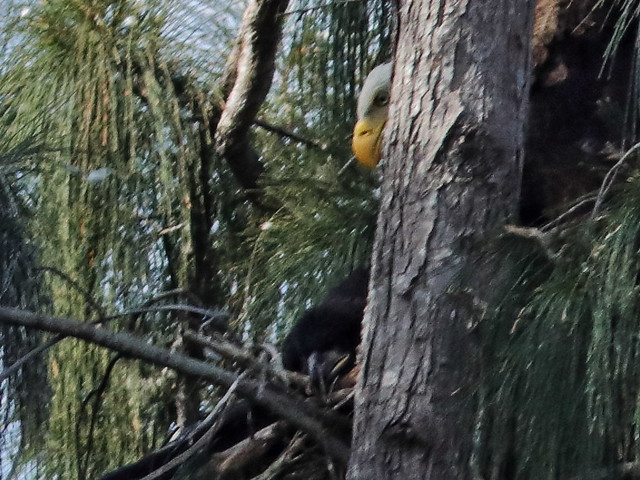 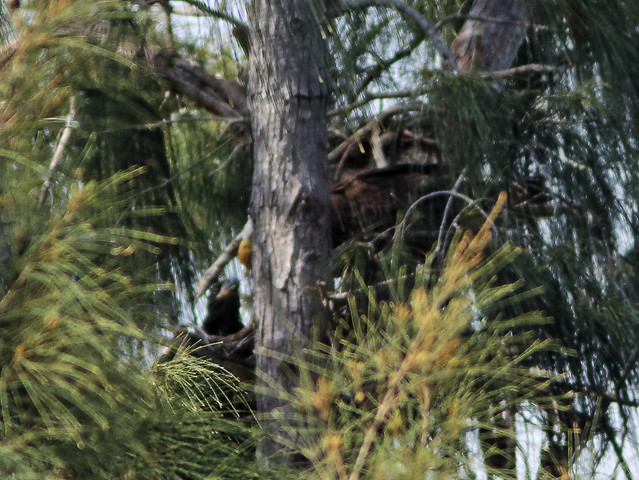 The eaglet stood up as the female parent tended to her: 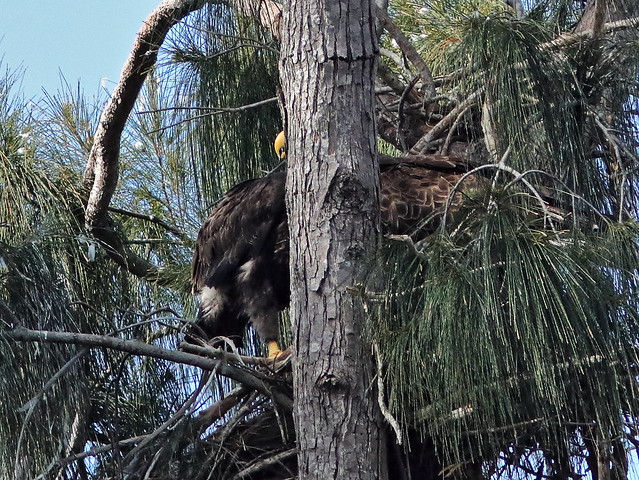 In Illinois I lost two days worth of bird photos when I uploaded my photos and got a message that the files could not be opened, then that my SD card was corrupt. Did get out one final day and will review those photos later, but I missed some very nice views of kinglets and terns.

Back home in Florida I did get out one morning and found two Spotted Sandpipers, one of which posed nicely: 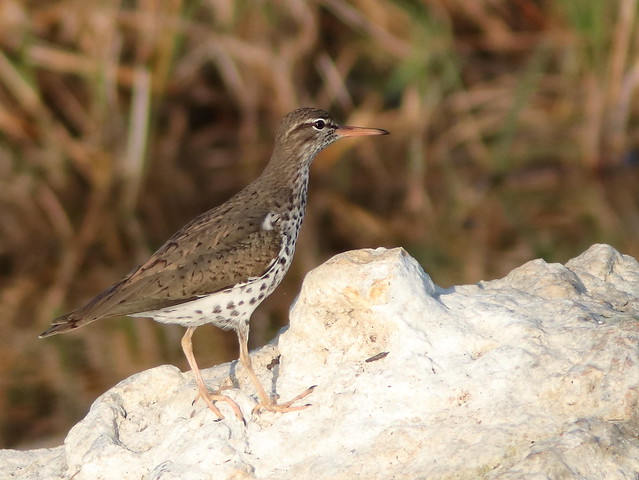 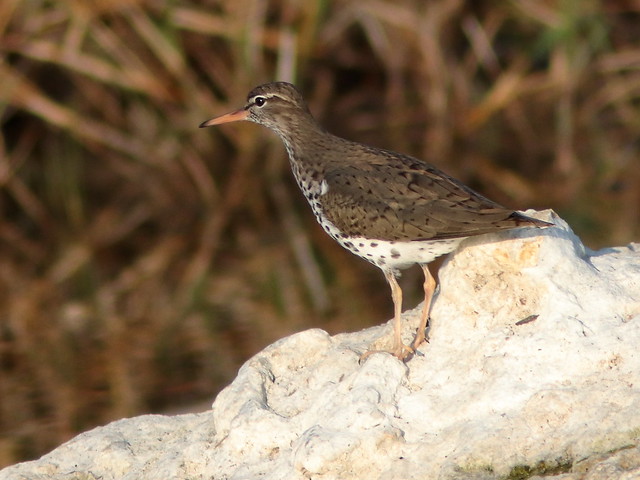 When they took flight I shot rather blindly and all bu two of my series were nothing but blurs. Two frames made up fo the loss: 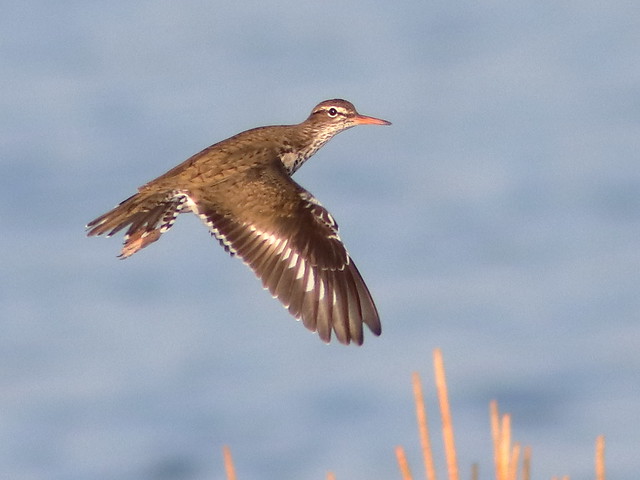 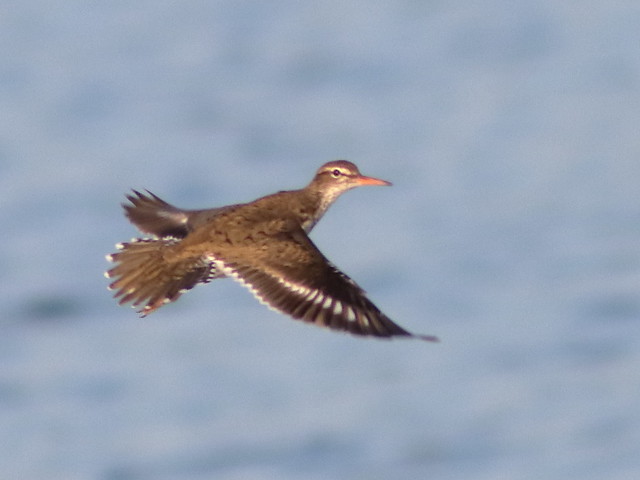 A Killdeer was also very cooperative: 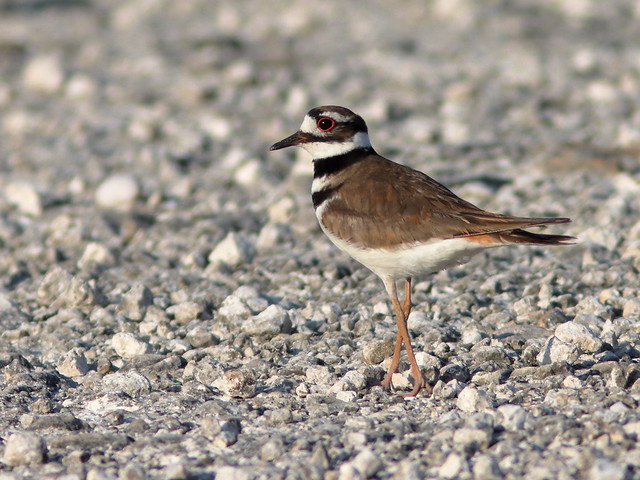 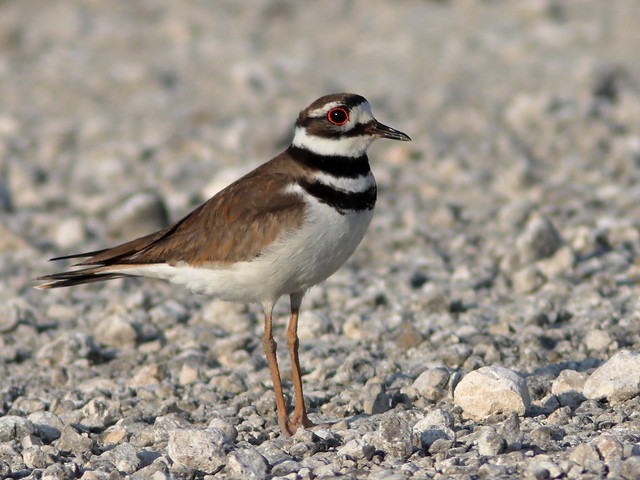 The day-old Full Pink Moon was setting late, but it reflected in the calm before sunrise: 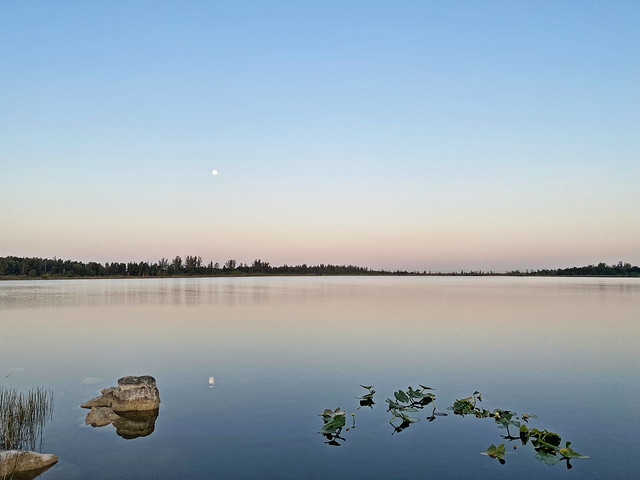 The view to tne north before sunrise: 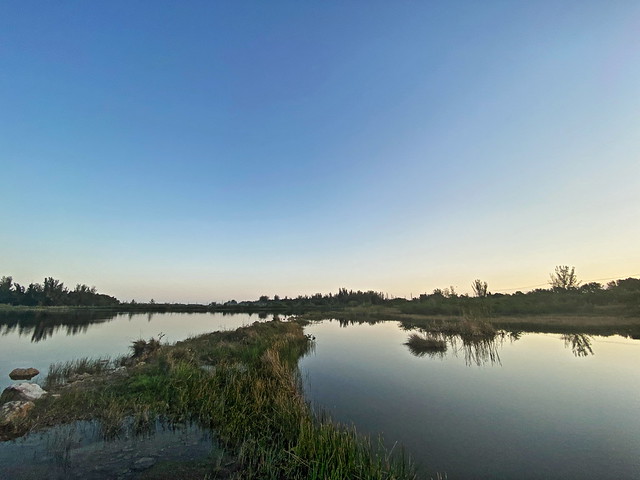 BULLETIN (Wednesday, April 28): The remaining eaglet has not been seen all day and the adults are not around. No calls are heard to suggest a fallen eaglet. Wildlife rescue is now searching for a possibly downed eaglet.

UPDATE (late Wednesday): The area in the vicinity of the nest was searched and the eaglet was not found. It is not capable of flight. Searchers found two burrows in higher areas near the eagle nest tree with large openings suggestive of Coyote or fox dens. Raccoons also scavenge the area under an eagle nest for prey remains. Rodents also may be attracted as are predatory Bobcats. There were high winds yesterday evening which may have whipped the nest tree. As I had mentioned above, the remaining eaglet appeared to occupy in a very vulnerable spot in the nest remnant.

I do not wish to create false expectations, but there is a glimmer of hope worth considering---

At this point it is presumed that the eaglet has not survived. She did have considerable development of flight feathers, as evidences in the photo which shows them trailing out over the left edge of the nest, but I could not document their length in any of the hundreds of photos I took of the nest the day before she disappeared. Could we have miscalculated her age? She occasionally flapped wings but did not venture out on branches ("branching"), which usually occurs about 6-7 days before first flight.

Based upon the female starting to sit continuously deep in the nest, we presumed that the first egg was laid around February 1 and projected a hatch date of March 7 or 8. Jessee suspected she was incubating as early as January 20, but the female continued gathering and arranging sticks through the end of January.

A problem with this nest has been the difficulty in closely observing the female during incubation. She appeared to change her position, raising up as if tenting an new chick at the end of January or beginning of February. How accurate were our ground observations? In the past we have noted less activity around the nest after only a single eaglet fledged. A single feeding location is most efficient if there are multiple eaglets.

Nest watchers will continue to observe the behavior of the adults and listen for any calls from an eaglet, though there is not much optimism about her survival.

Posted by Kenneth Cole Schneider at 7:34 AM