This is a follow-up to the events described in my earlier post: EAGLETS DOWN

After the failure of the rescue crew to locate the second downed eagle on Wednesday, April 28, our hopes were dashed. We watched for the adults and listened for any eaglet calls. Volunteers heard no sound of an eaglet during multiple visits on Thursday and Friday. Then, late on Saturday) afternoon, May 1, Richard stopped by on his bicycle and heard a call which he recorded and then confirmed as indeed the cry of an eaglet. Phil notified Florida Fish and Wildlife Conservation Commission (FWC) and arranged to meet an officer at the nest in the morning.

I arrived at the eagle nest on Sunday morning at 6:50 AM, just after sunrise. At first all was quiet, but at about 7:10 AM there were the distinct calls of an eaglet from an area very close to the sidewalk and a short distance east of the nest tree. With other watchers, we heard over a dozen eaglet cries before the arrival of FWC, at about 8:15 AM.

Phil and the FWC Officer entered the woodland and searched through the tangle of fallen trees for over two hours. Probably because the eaglet was startled by the presence of the rescuers, it fell silent, calling only about twice but never near enough for Phil and the Officer to determine its location. Then at about 10:45 AM they finally felt that, because of the  nearly impenetrable undergrowth and tangle of fallen trees left by Hurricane Irma, it was necessary to suspend the search.

The FWC Officer was just preparing to depart when Richard looked into a break in the foliage and said he could see the eaglet! I waved down the Officer just as he was departing. It was amazing because I found it almost impossible to see the eaglet in the dark and dense forest floor. Richard did his best to point it out, saying, "Look for its yellow feet." That did it and I got partial views of the eaglet standing tall on a fallen log, only about 20 yards from our position at the edge of the woodlands. 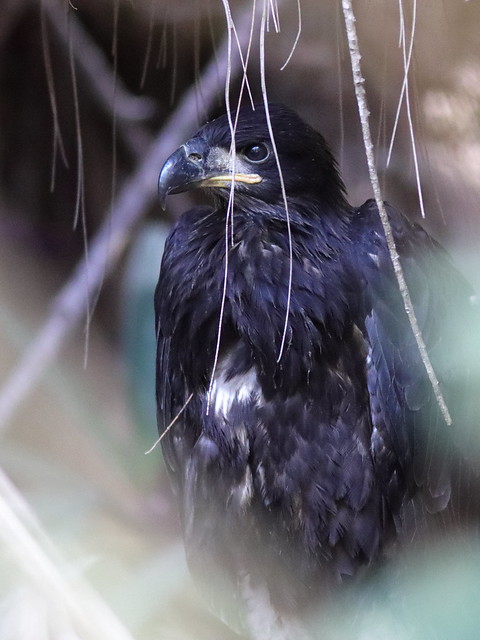 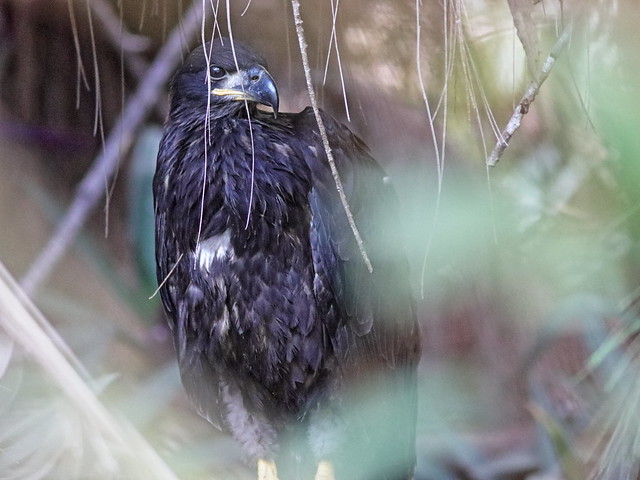 We watched as the Officer, carrying a large net, got within a yard or so from the eaglet. It suddenly ran into a hole between the limbs of the fallen tree. It was crouched down and quite inaccessible. Phil and his wife Mary joined the FWS Officer in trying to access the eaglet. They brought some fish, in case it might entice the hungry bird to come out into the open.

Pembroke Pines Fire & Rescue then arrived with longer poles and a chain saw. The latter was not needed as the eaglet responded to gentle probing by moving to a spot where is was finally captured. 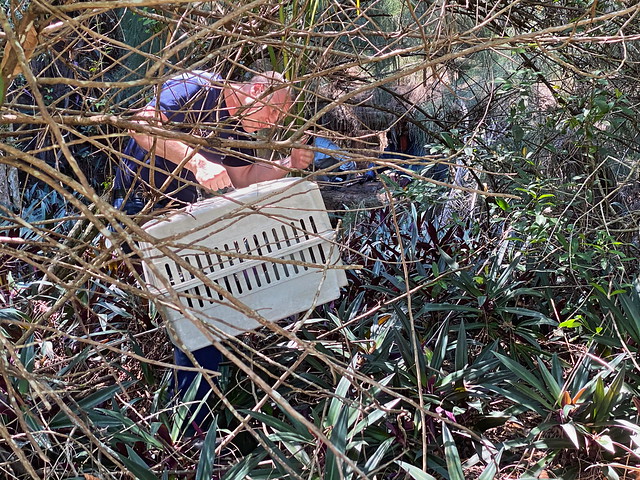 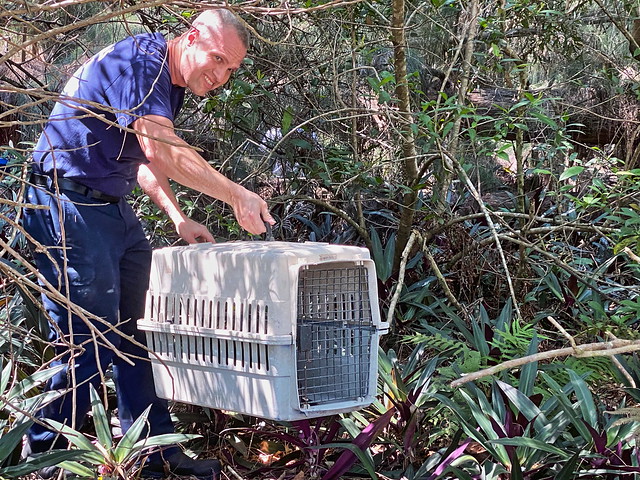 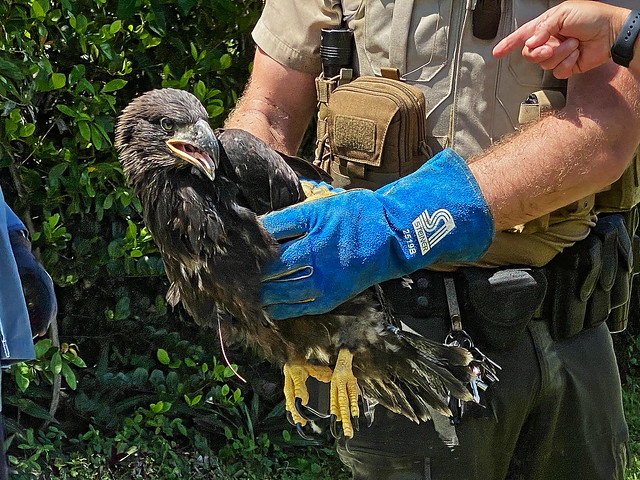 It was brought to a local wildlife rehabilitation facility for examination and treatment as necessary. Except for mild anemia and hookworm infestation, it was hungry but uninjured.

Kudos to volunteers Phil and Mary for being part of the exhausting search effort. Richard was doubly a hero for this eaglet. By hearing and reporting its presence the night before, he renewed the search. To top it off, it was Richard who spotted the eaglet just before the search would have again been suspended.

As we were listening for the eaglet to betray its presence, an Eastern Screech-Owl looked out of its nest from a woodpecker hole in a dead palm tree in front of the abandoned nest. The adult appeared first: 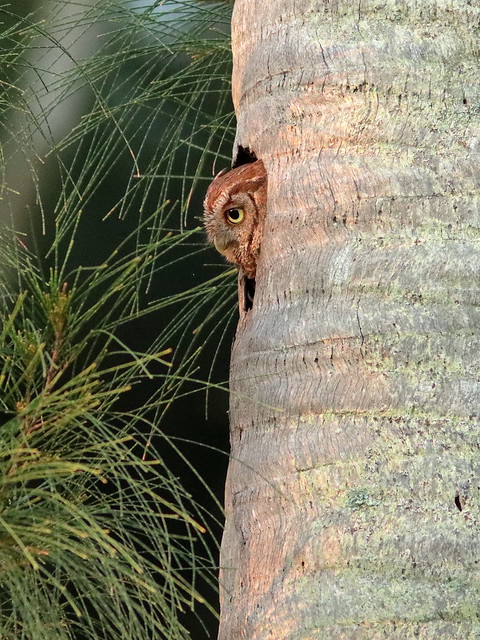 Then, a downy juvenile peered out: 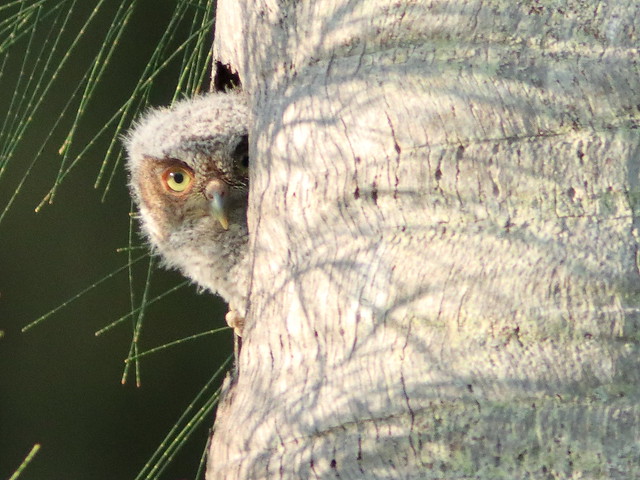 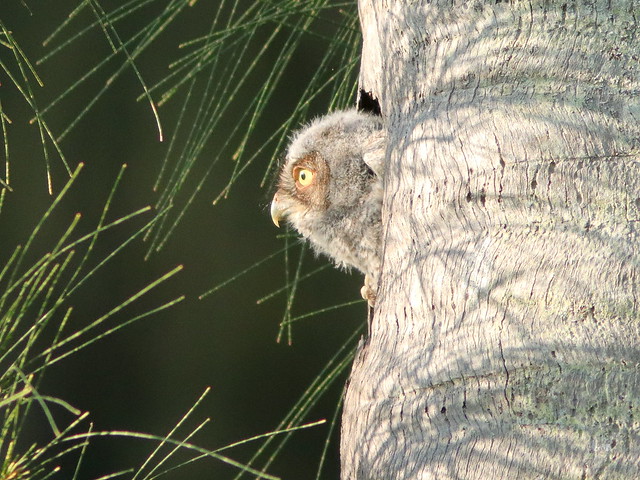 The eagles have kept me so busy that I got behind in processing my photos. After losing a couple of days worth of pictures from our visit to Illinois, we did get out one day to local parks. I also clicked a few shots while relaxing on our daughter's back deck. Here are some backyard birds framed by the bars of their iron fence. 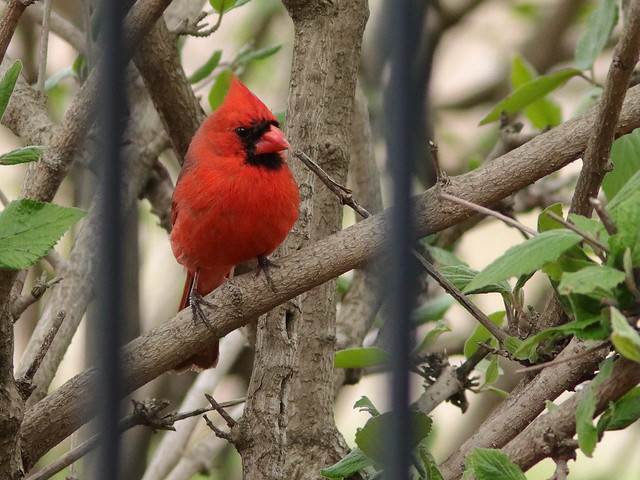 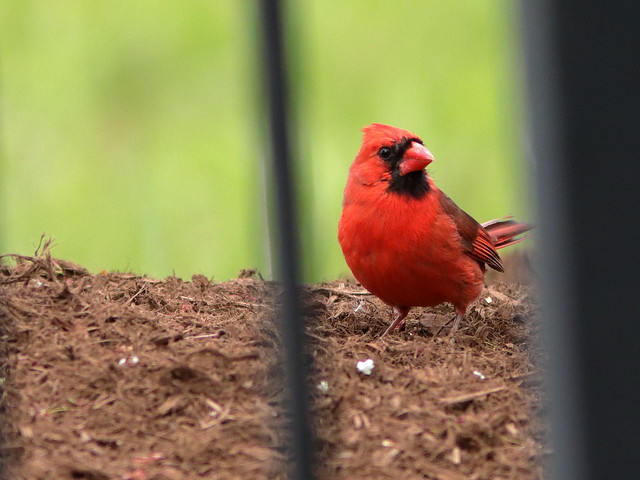 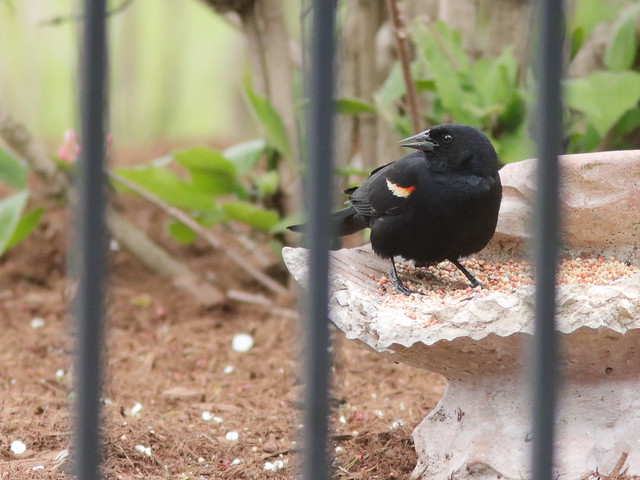 Brown-headed Cowbird at their feeder: 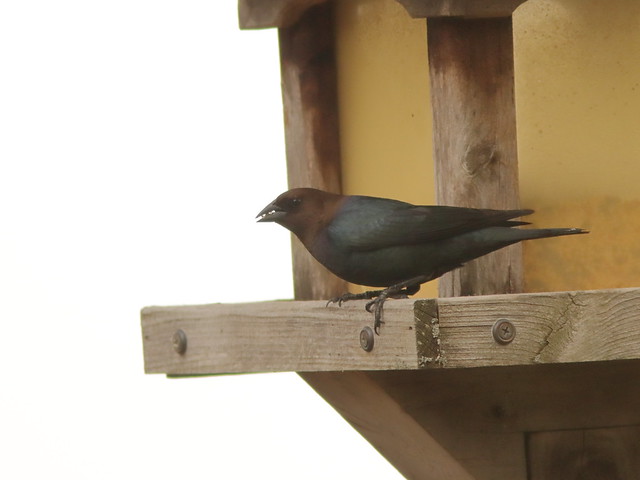 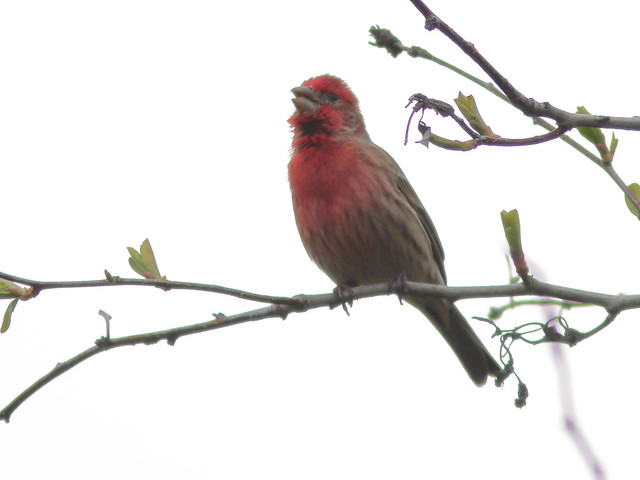 At nearby Jones Meadow Park, a pair of Canada Geese tended to five goslings: 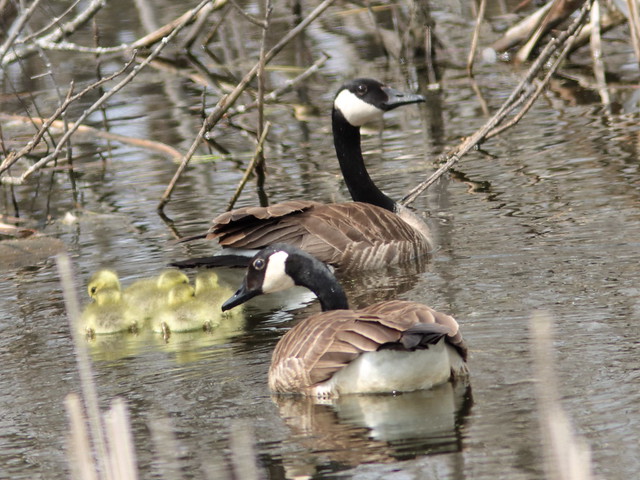 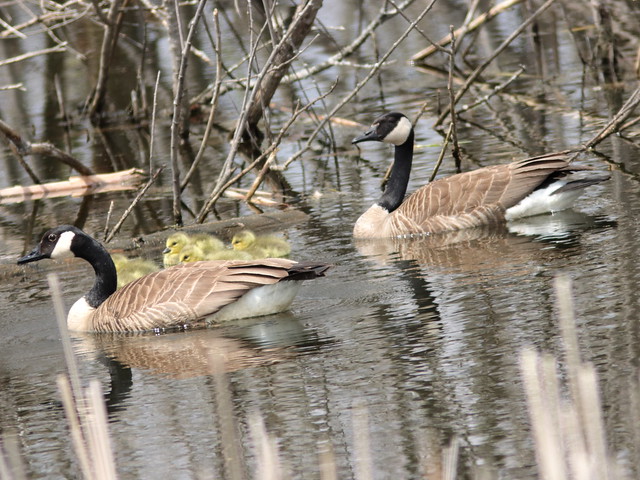 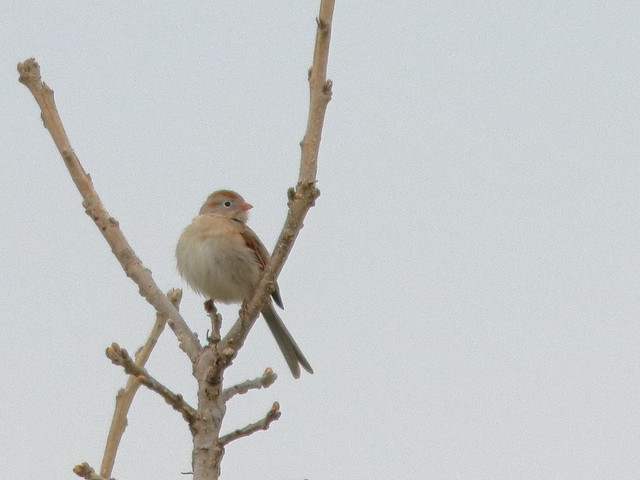 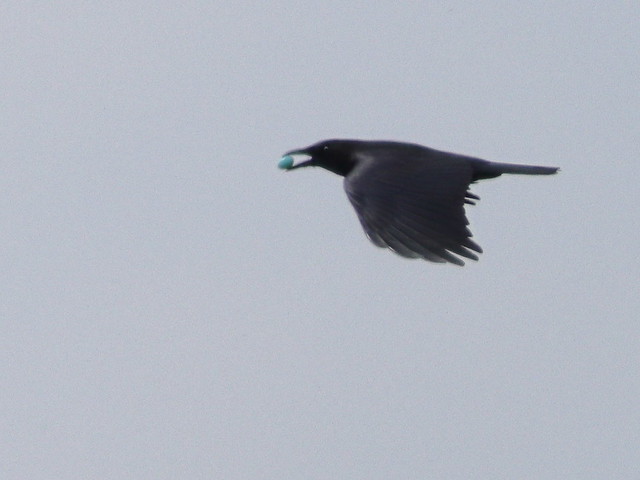 At home in Florida, view from the back patio before sunrise on May 11: 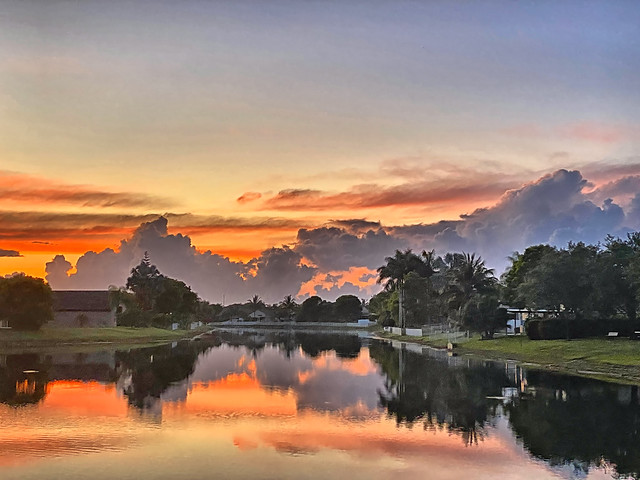 A fish disturbed the surface of the lake: 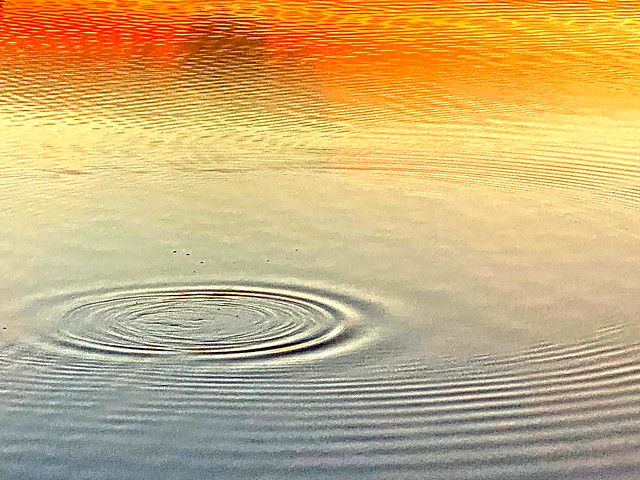 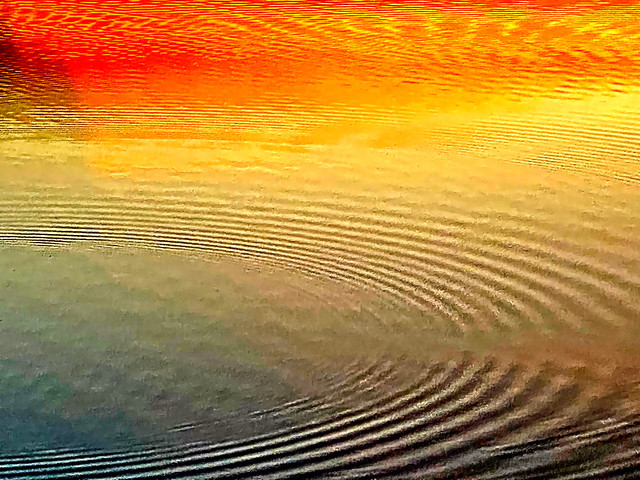 Later, on our morning walk, I found last year's antler of a young buck, the first I have ever found: 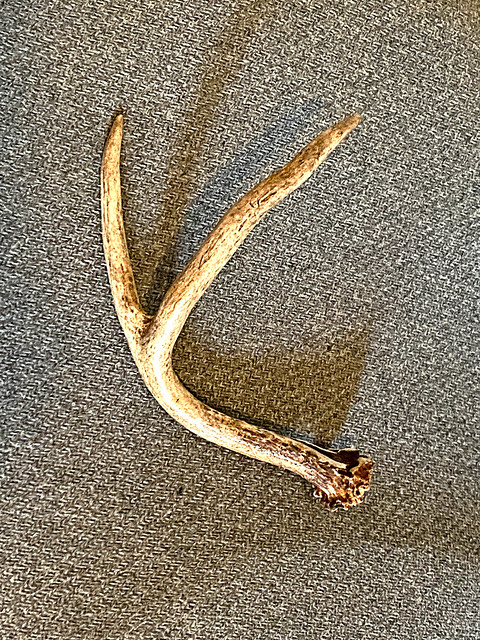 Near where I found the antler, a young white-tailed buck in velvet walked out into the open and stared at me from a distance. Could this have been the one who donated the antler?: 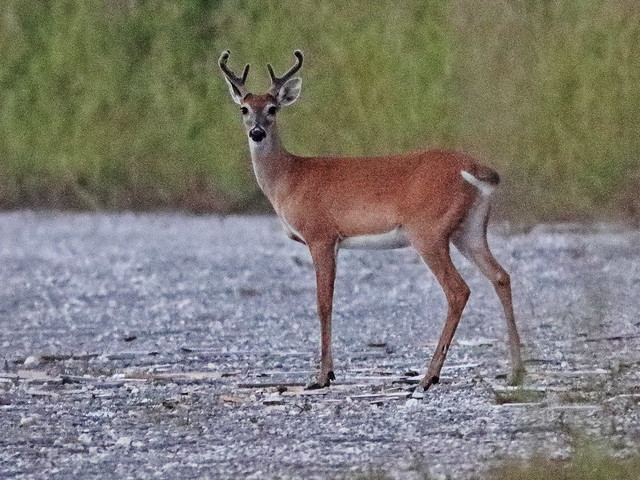