The excitement of spring migration and the drama surrounding the successful rescue of both the eaglets has subsided, but routine morning walks sometimes offer a little something extra.

An adult Loggerhead Shrike caught a dragonfly and fed it to a youngster: 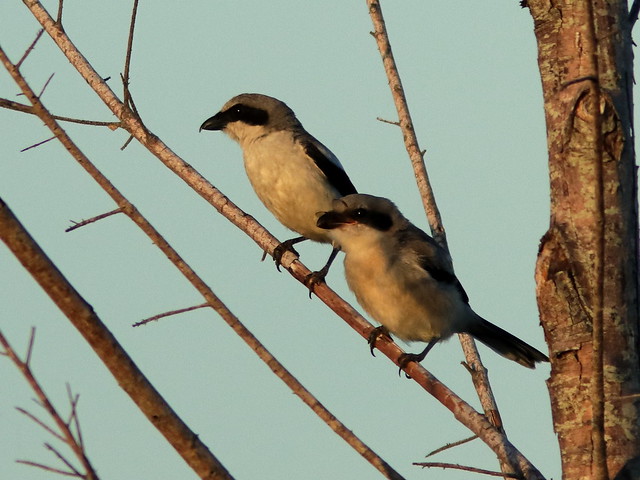 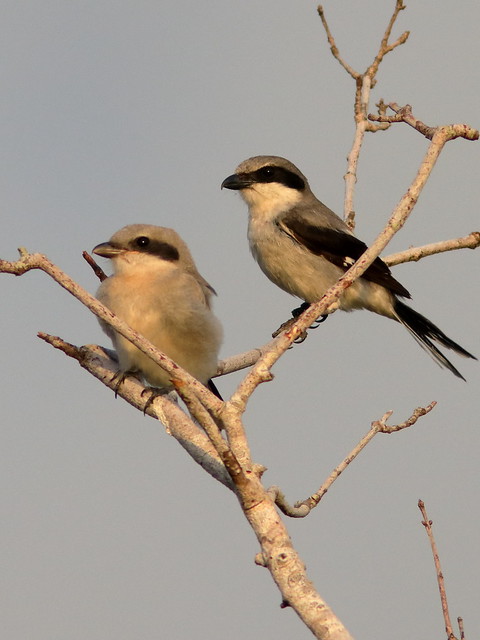 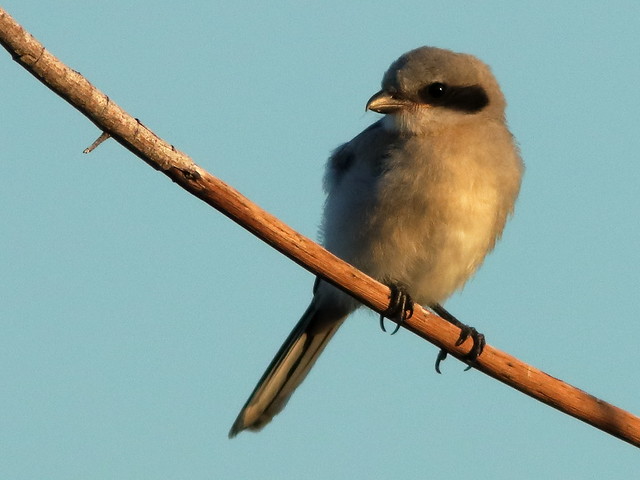 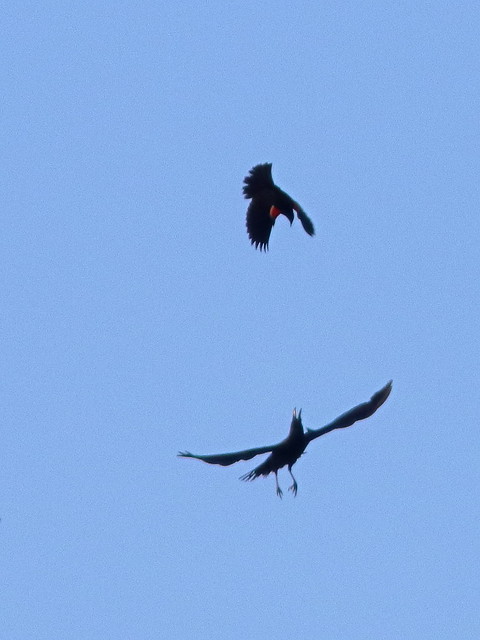 An Eastern Screech-Owl settled close by and posed nicely: 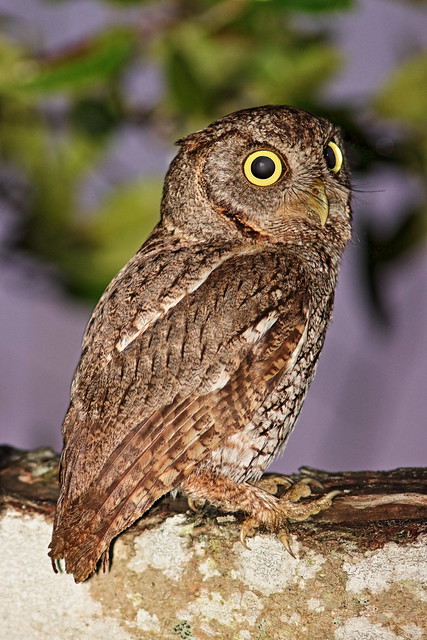 Out on the Bar Ditch Trail, a White-tailed buck with antlers in velvet watched me as I walked along at sunrise: 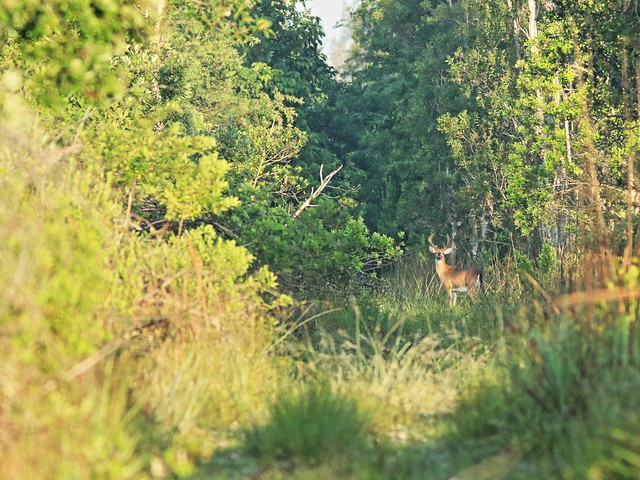 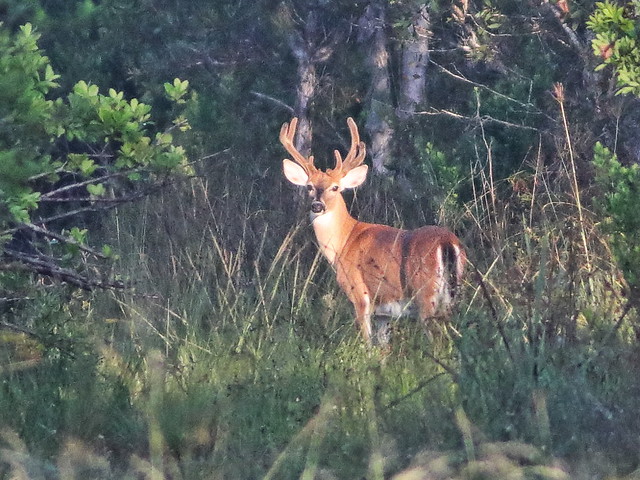 More than 50 White Ibises flew over in a loose "V" formation: 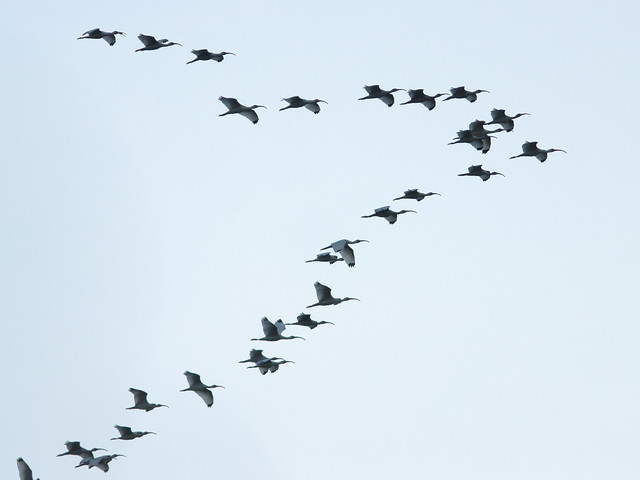 A Green Heron crouched low in the ditch as I passed by. If it had not moved a bit, I would never have seen it: 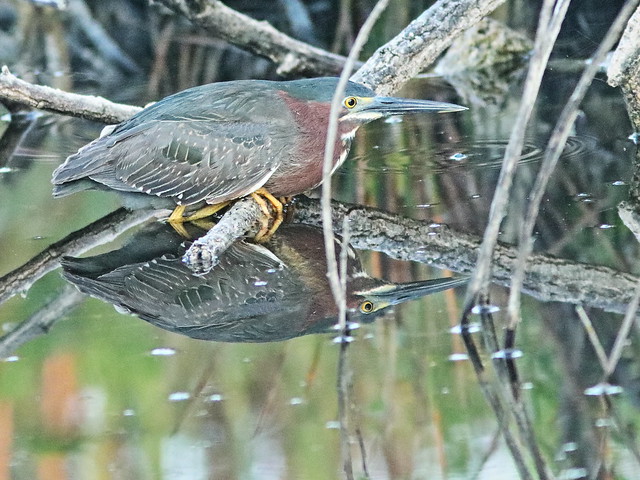 Common Ground Doves have been uncommon and even missing the past couple of months, but three suddenly showed up this week. Only one male posed for a photo: 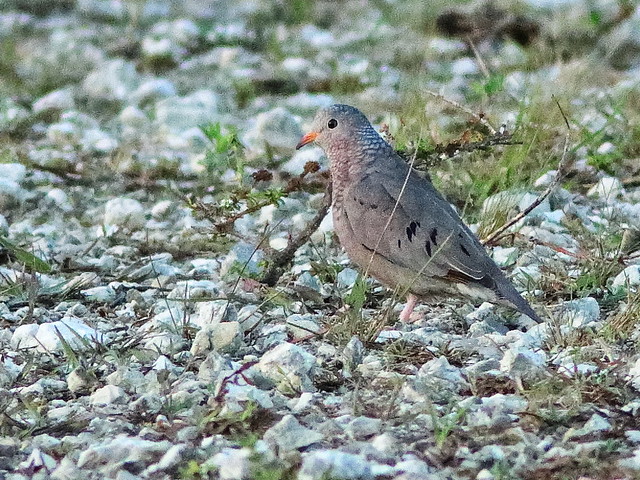 Least Terns usually arrived in early April, courted and then brought their young to our lake, but none appeared this year. Many of the urban terns nest on flat gravel roofs such as that on the supermarket about a mile away. These roofs last about 30 years and many are being replaced with more modern technology involving insulated panels and an impermeable membrane, not friendly to the terns (as well as nighthawks, Killdeer and gulls)  This week I was surprised to briefly see my first and only Least Tern: 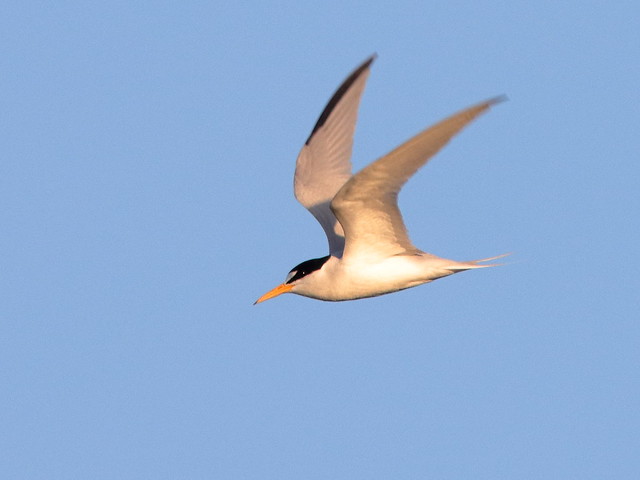 A Black-necked Stilt lingered at nearby Chapel Trail preserve: 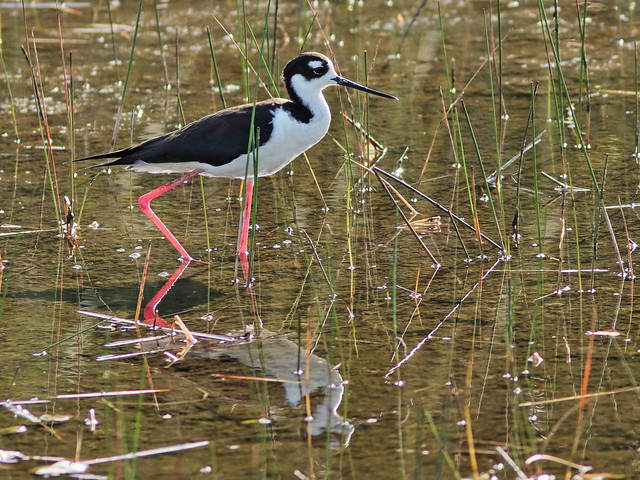 A female Northern Cardinal carried sticks to a hidden nest: 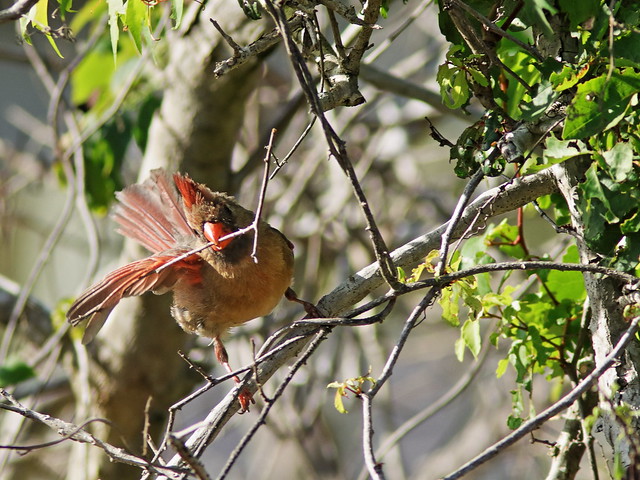 A Tricolored Heron foraged at the edge of the lake in our back yard. They usually are very shy, but this one provided some nice views: 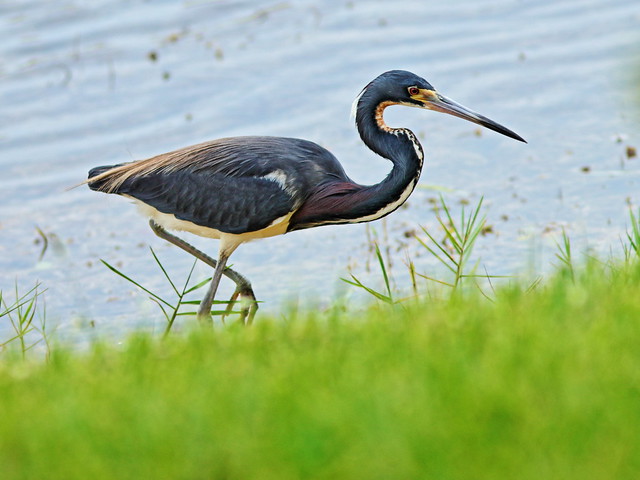 Water levels in the wetland lake have reached the season's low and the water is receding from the lakeside marsh. This photo was taken ten minutes before sunrise: 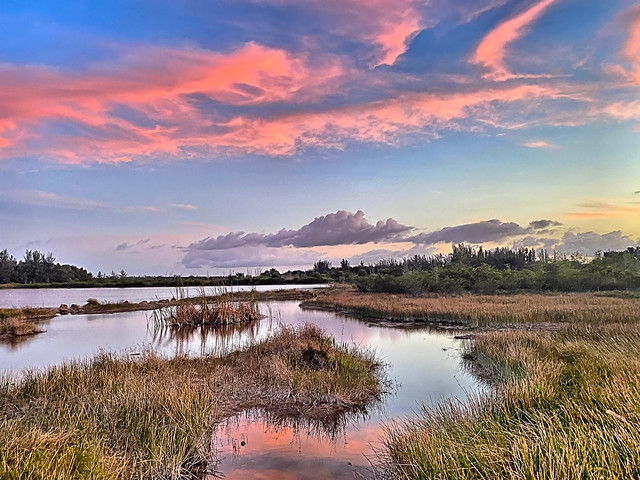 At sunrise, the sheltered water behind an old levee reflects a colorful sky: 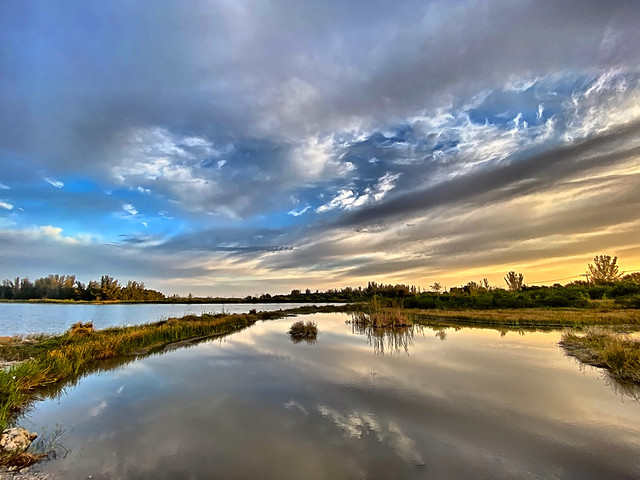 The rainy season is starting early. The official start of hurricane season his being moved earlier, to May 15 instead of June 1.  On May 18, the sun rose behind storms moving in from The Bahamas: 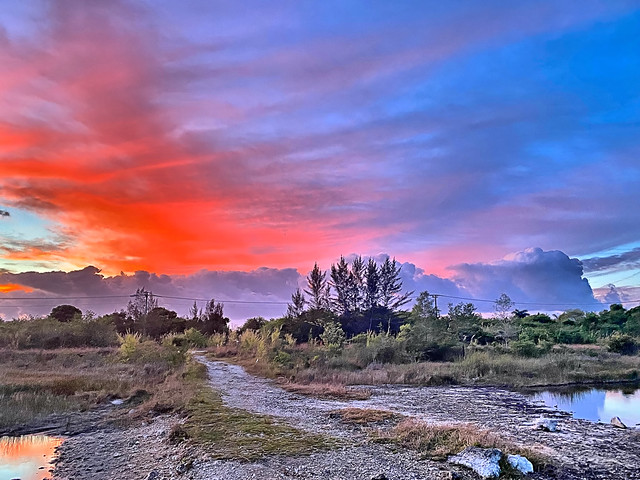 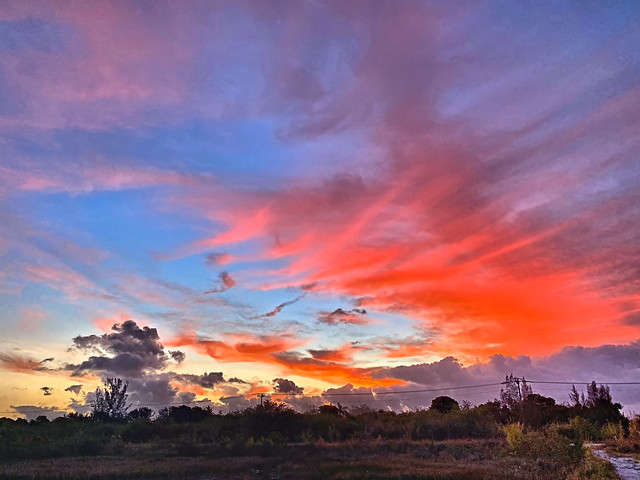 A lagniappe (lan-Yap) is an old Louisiana tradition, especially in the French Quarter of New Orleans... The word lagniappe might be applied to any unexpected bonus that comes with something else. For example, if you bought a car and found a 50 dollar bill in the trunk, it would be a lagniappe (Wikipedia).