We joined our daughter's family for a brief stay at Paris Landing State Park in northwestern Tennessee. We spent 4 nights in a cabin on the forested shore of Kentucky Lake. I prepared for the trip by reviewing past years' eBird sightings reported for this location in late June and was delighted to see that the Prothonotary Warbler was commonly present.

This is a species which breeds in much of the eastern US except for far northern areas and the southern half of the Florida peninsula, I first saw one as a beginning birder back in New Jersey. However I had never encountered one in my local south Florida birding patch and longed to photograph it.

MaryLou and I flew from Fort Lauderdale to Nashville and drove a rental car about 120 miles to the cabin. Our daughter, her husband and our two granddaughters drove down directly from Illinois and arrived just before us.

The cabin is situated on a downslope, surrounded on three sides by mature hardwoods. The back deck, elevated about 20 feet above the ground, extends out to provide a commanding view. I wasted no time getting out there with my binoculars and camera.

Immediately upon opening the back door, I heard the unmistakable song of a Prothonotary Warbler. It was in plain view, although it seemed to favor the midstory to lower canopy and I sometimes had to shoot downward a bit: 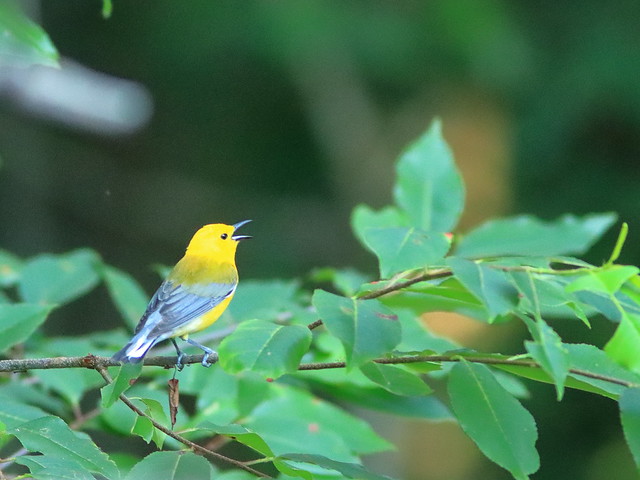 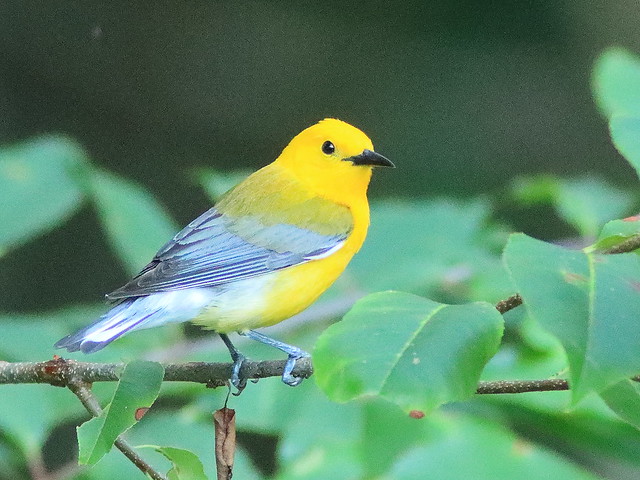 The plumage of those in the shade exhibited traces of orange, like slightly burnished gold: 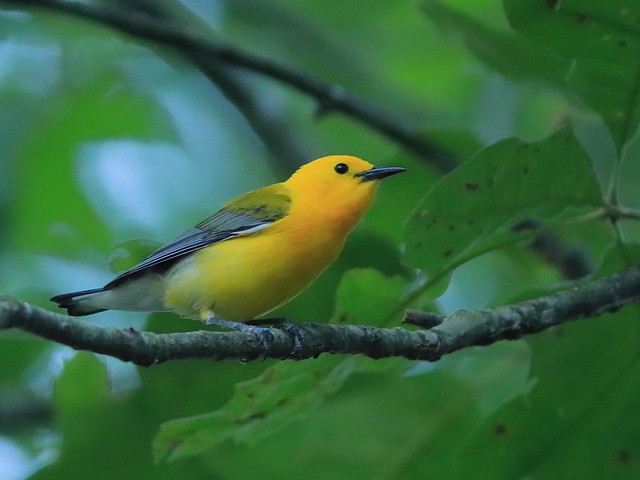 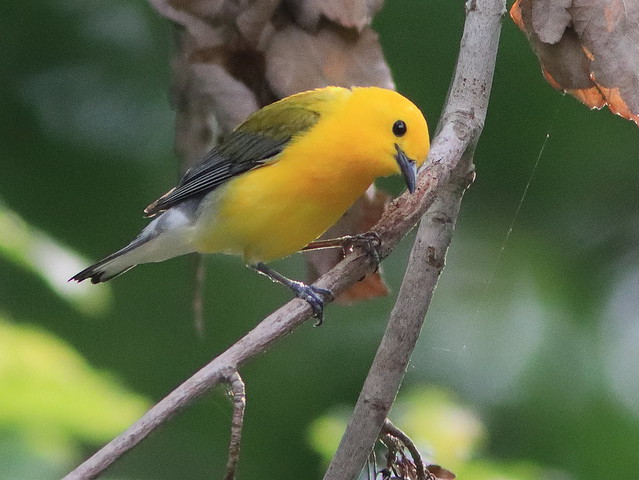 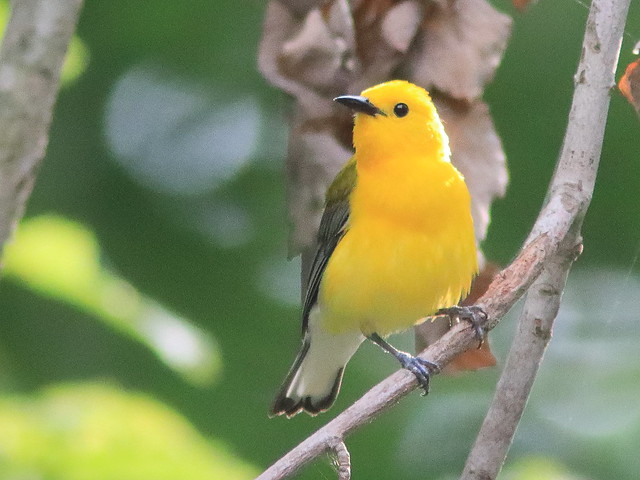 For some reason I find it very difficult to spell their common name without looking back at what I typed. Actually this should be easy, as this warbler's name is derived from Greek protonotarios, "first scribe." The "h" was added in Medieval Latin. The word prothonotary means "First Notary," the title given to the highest administrator of the Court of Rome, where the papal clerks wore bright yellow garments to distinguish them from the red cloaks of the bishops.

In American English, the word Prothonotary is said to have appeared for the first time in the State of Pennsylvania Ordinance of 1707, to describe the clerk of courts when the court of common pleas was established. The warbler was given its name in 1779 when a specimen collected in Louisiana was described in French as "Le figuier protonotaire." Its common name was once "golden swamp warbler." (Now, wasn't that more than you ever wanted to know about a bird's name?)

Another bird which I expected to encounter was the Summer Tanager. I was not disappointed. They were easily seen from the back deck, often at eye level: 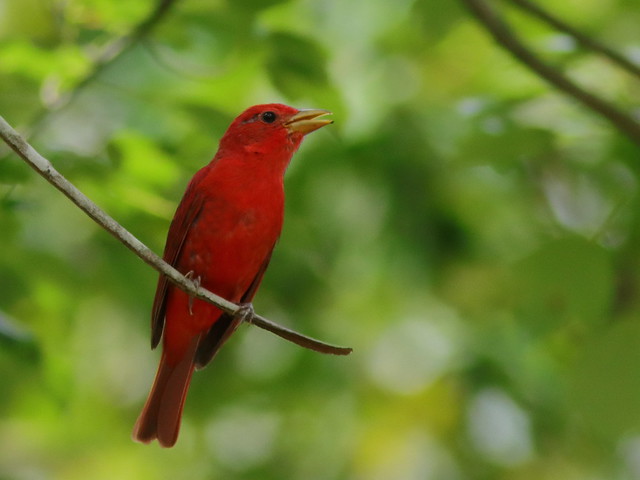 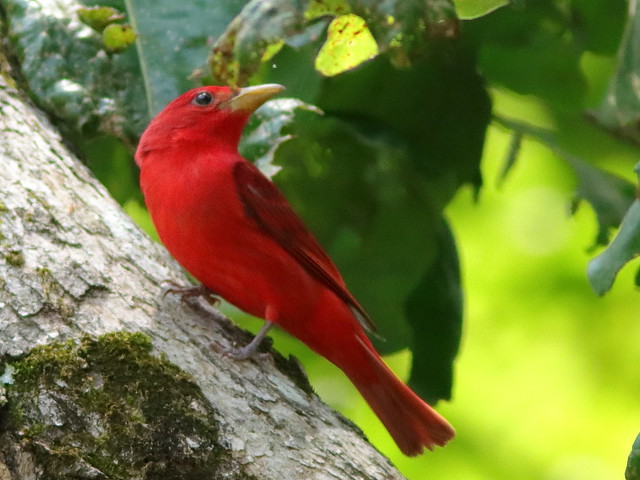 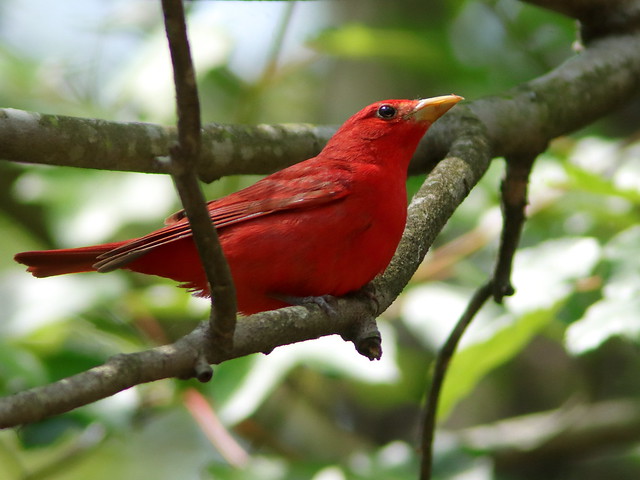 Less accessible were the Orchard Orioles, which usually kept to the treetops. This is a female: 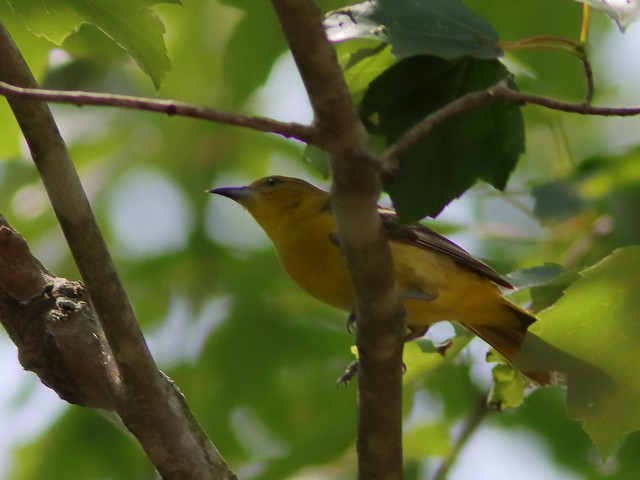 A male Orchard Oriole surprised me by briefly alighting on an open branch, nearly in plain sight. Luckly, I had camera in hand and was trying to catch sight of an elusive titmouse. Although partly obscured by foliage, these were among my best views of the oriole: 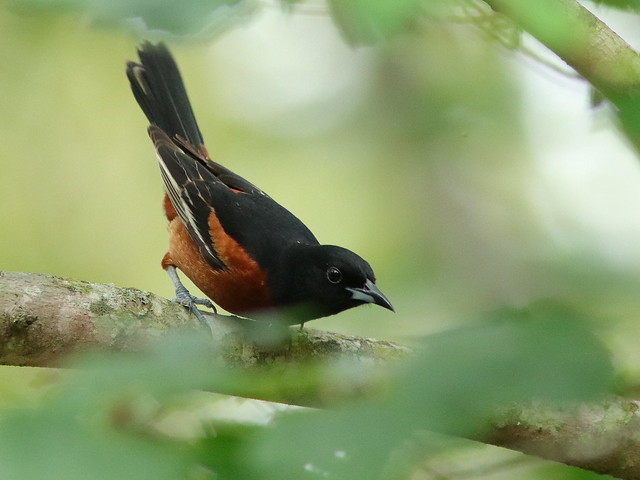 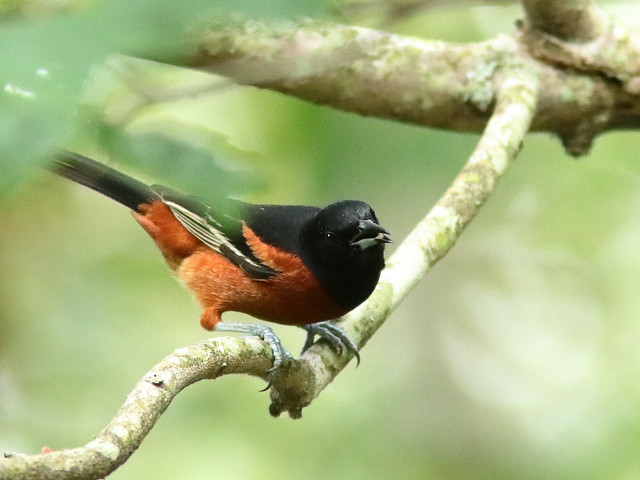 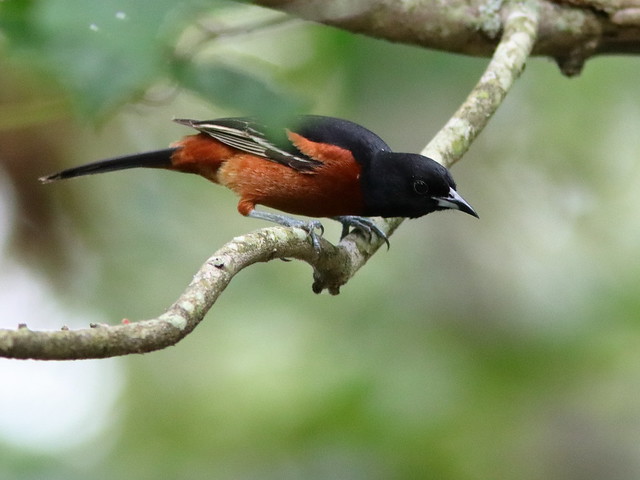 Tufted Titmice called out frequently, but moved about very rapidly. One also favored me by venturing out on the "oriole branch:" 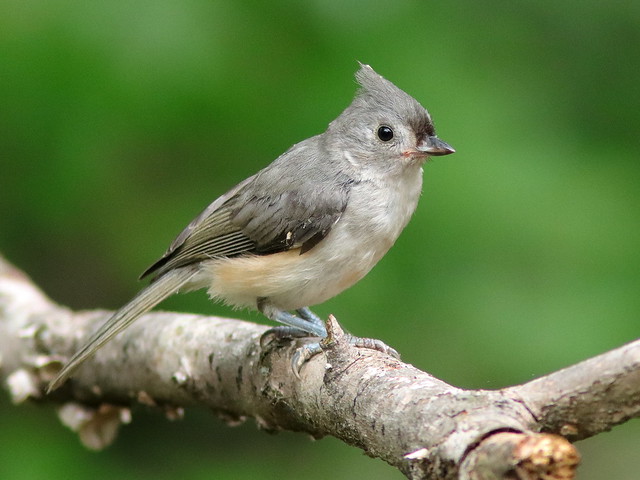 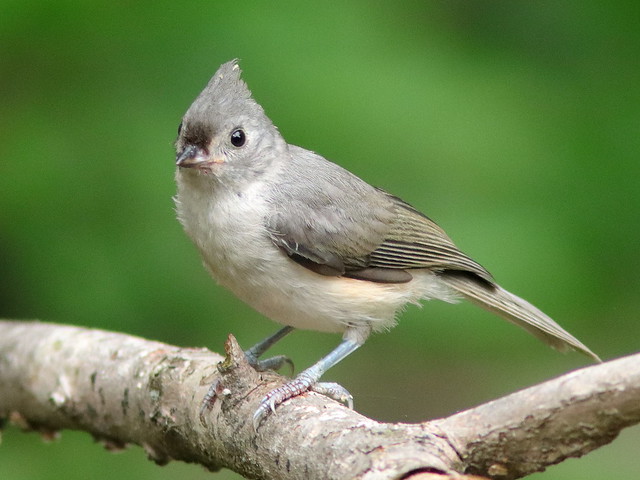 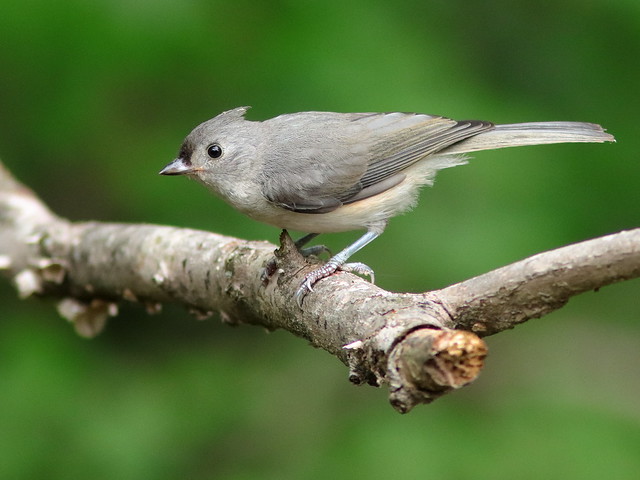 The Carolina Chickadees never came out into the open, so I obtained very poor shots: 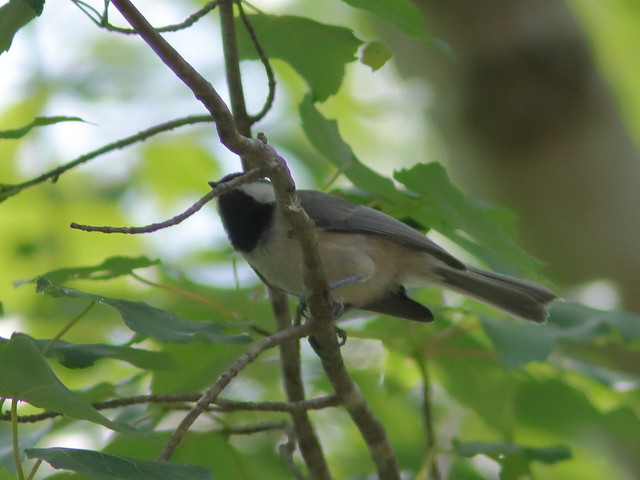 A pair of Eastern Bluebirds startled me by flying in from nowhere. I only snapped a photo of the male before they were gone, not to appear again: 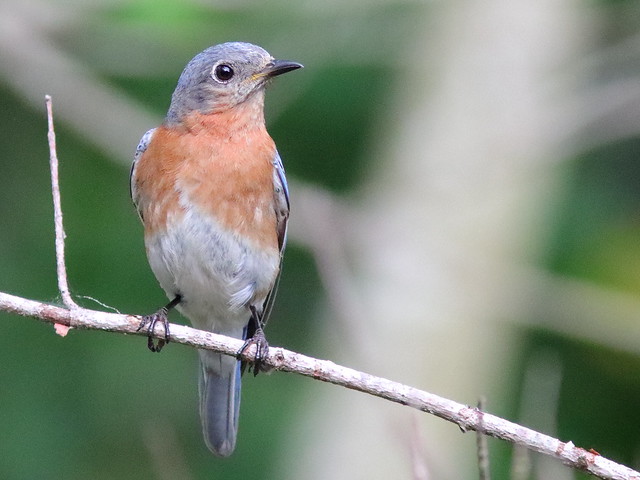 A male Downy Woodpecker was also "one and gone:" 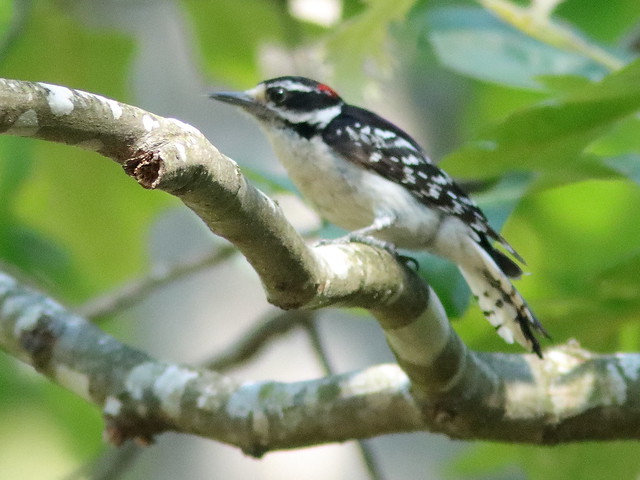 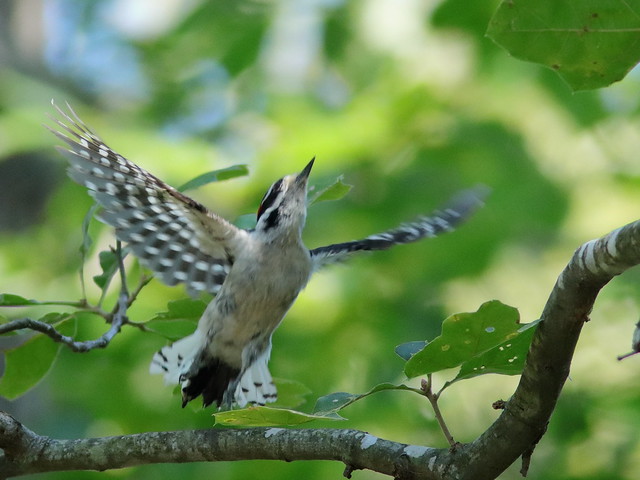 All in all, I identified 29 bird species, missing only one of my target birds, the Kentucky Warbler.

We stopped by in nearby Paris, where we found friendly Tennesseans (despite their being called "Parisites").  We did not want to miss seeing the Eiffel Tower*: 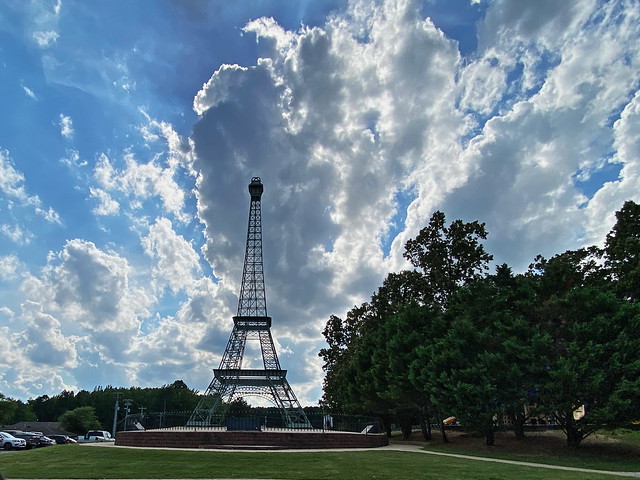 Aside from the birding, our daughter's family enjoyed a morning of boating and fishing while we walked the trails in the immediate vicinity of the cabin. 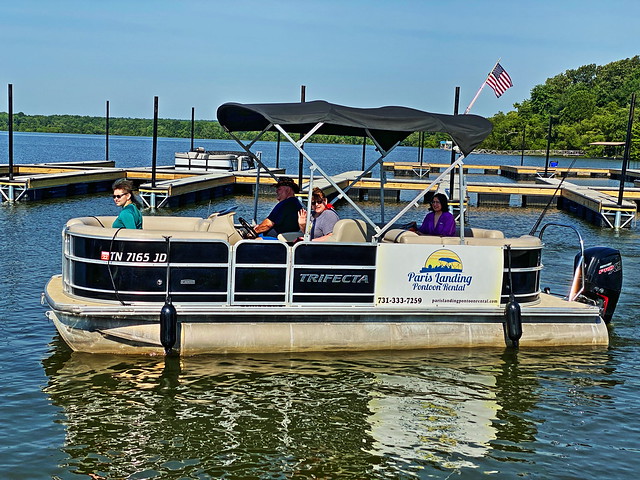 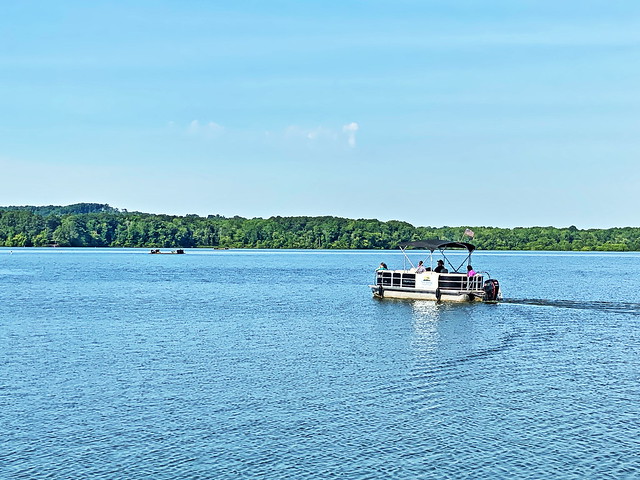 Kentucky Lake-- our son-in-law is nearly invisible, fishing behind the tree trunk: 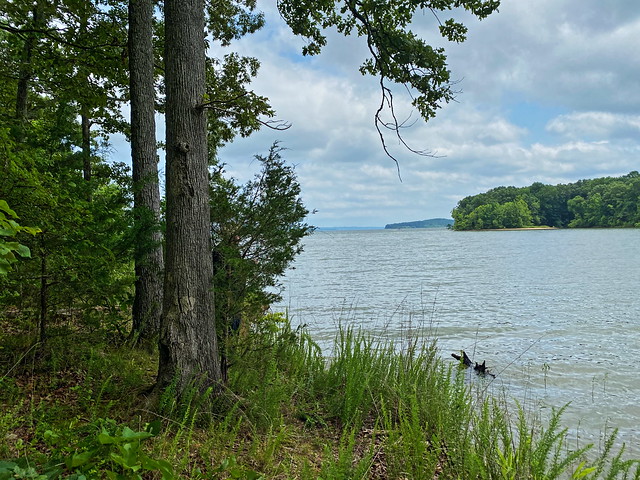 A quiet cove where we found what I thought to be an Acadian Flycatcher (upon review it was only the more common Eastern Wood-Peewee in bad light): 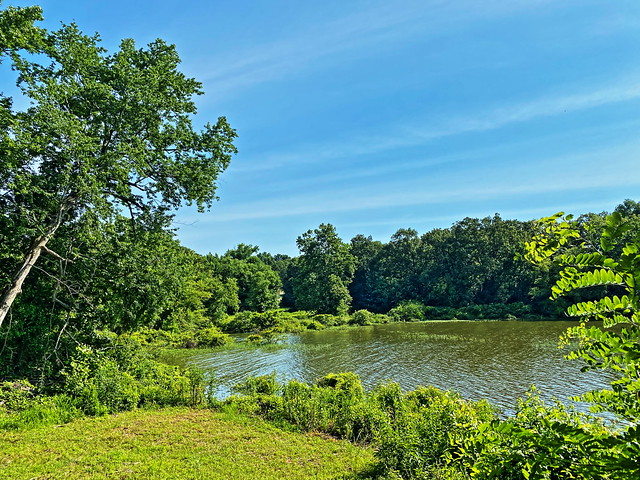 View from the back deck: 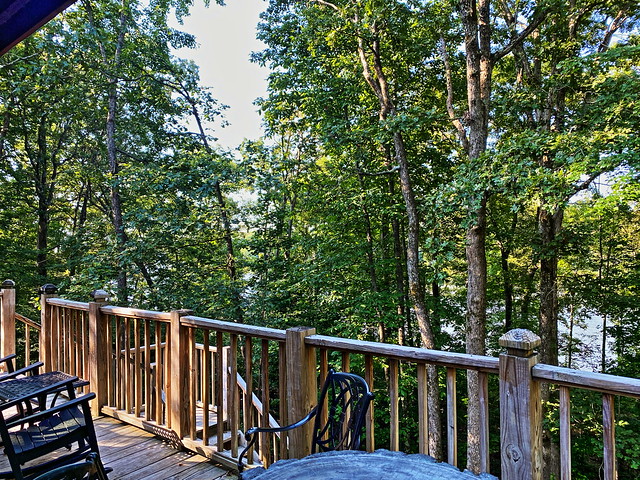 Here is a video from the deck early in the morning, taken by our daughter. You can hear the Prothonotary Warbler singing in the foreground:

Link to my eBird checklist with more photos and recordings.

*Paris was incorporated on September 30, 1823. It was the first town incorporated in West Tennessee, followed by Lexington on October 9, 1824, and Memphis on December 19, 1826. The city was named after Paris, France, in honor of the Marquis de Lafayette, a hero of the American Revolutionary War. One of 15 U.S. cities named Paris, the historic Henry County town of less than 11,000 residents is known for the "World' Biggest Fish Fry" as well as a 70-foot, to-scale replica of the original Paris' iconic Eiffel Tower...The town's Eiffel Tower, however, didn't come into existence until the 1990s. It was constructed by engineering students from Christian Brothers University in Memphis and dedicated in Memorial Park (later named Eiffel Tower Park) on January 29, 1993. The original wood structure has since been completely replaced by steel and is a popular spot for photo ops and events. C'est magnifique, y'all!" (REF: Southern Living)