Scores of Florida Trema trees* in our local Wounded Wetlands were destroyed by Hurricane Irma back in October, 2017. Nearly all the taller ones were either felled or stripped of their leaves. Most went on to die within a year. Those remaining were mostly saplings which flowered but did not bear the fruit which is so attractive to wildlife. Tremas normally produce abundant berries just in time for autumn migration. This year, some of them have matured and been very productive.

Southbound Red-eyed Vireos usually arrive ahead of most of the other songbirds, often by mid-August and become quite common by early September. On the first day of September, a half hour after sunrise, a flock of five were eating the Trema berries: 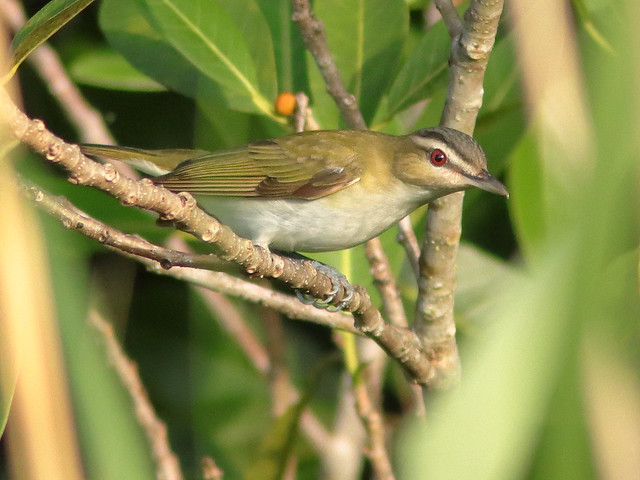 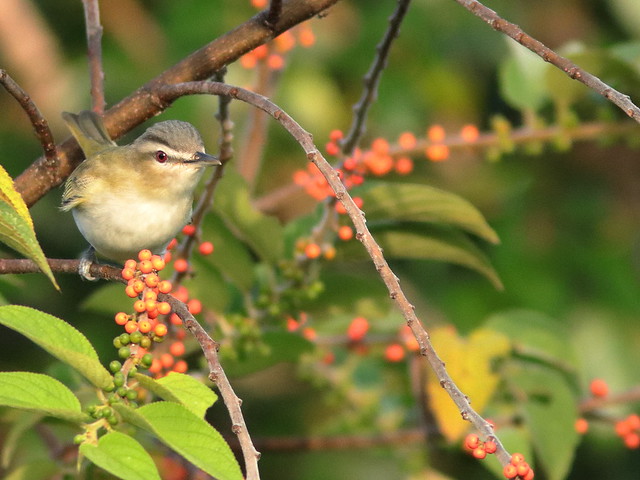 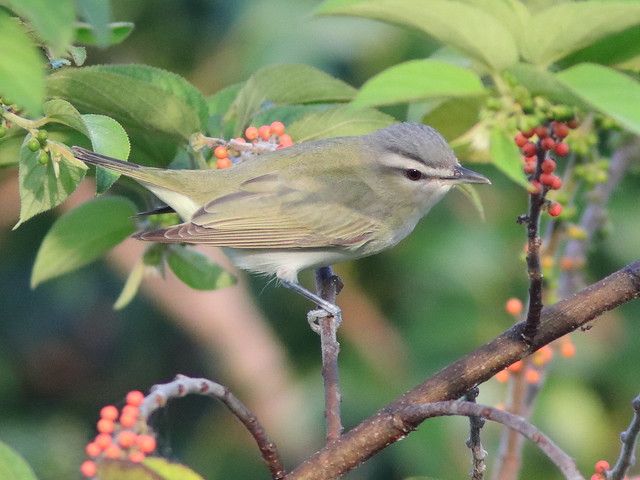 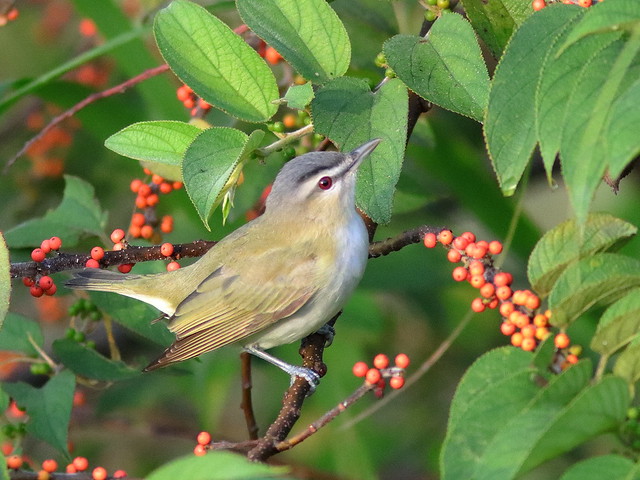 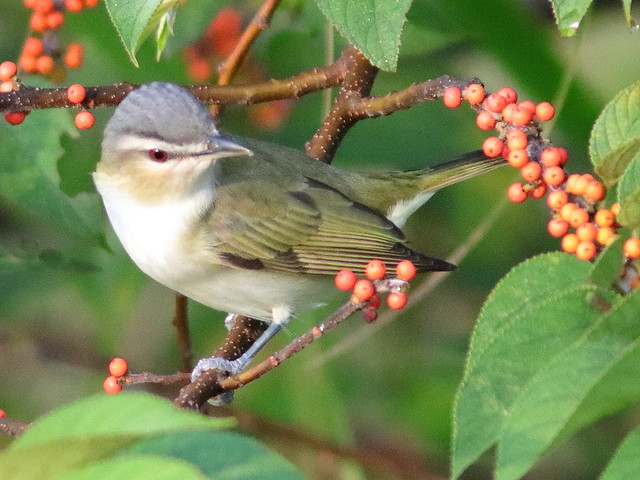 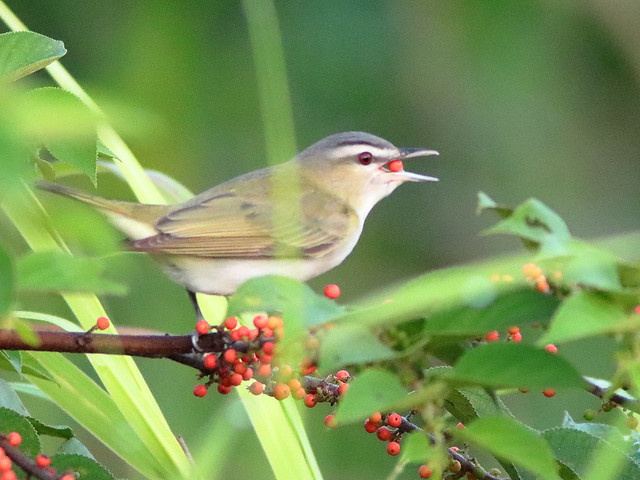 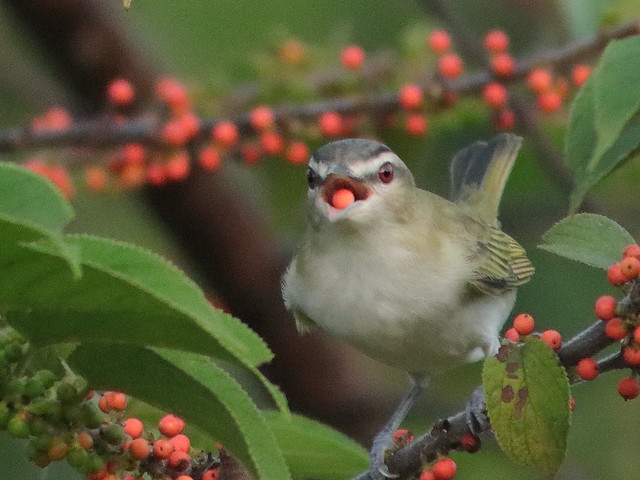 Three days later, just after sunrise, lighting conditions were poor. I did not carry my flash unit, but the vireos provided some nice views as they harvested the fruit: 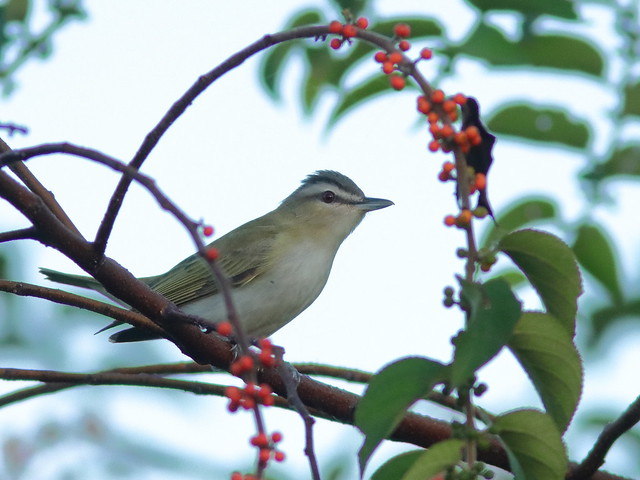 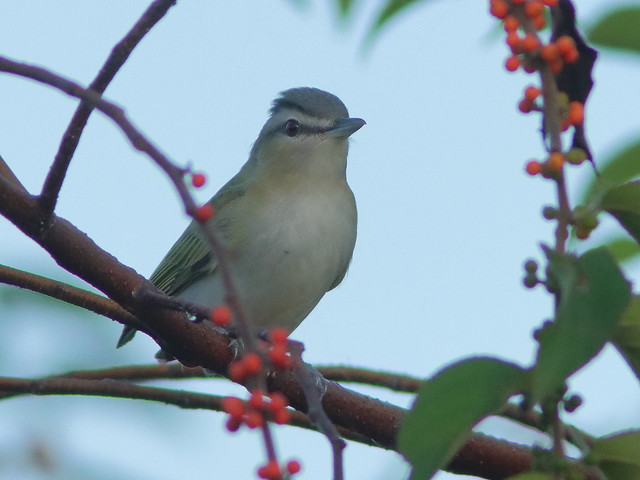 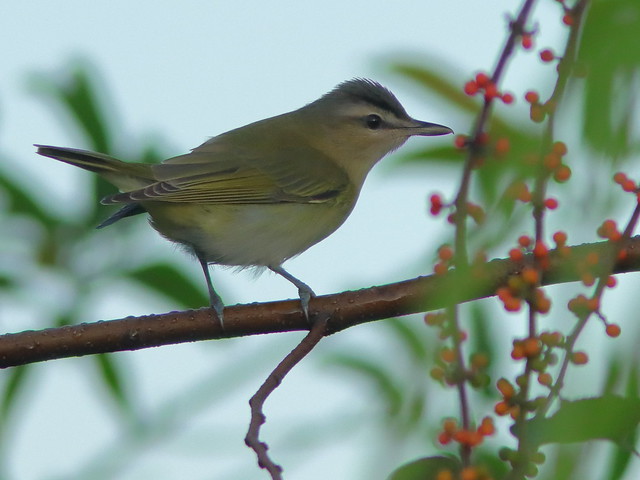 A male Northern Cardinal joined in the feast. His tail feathers were molting:: 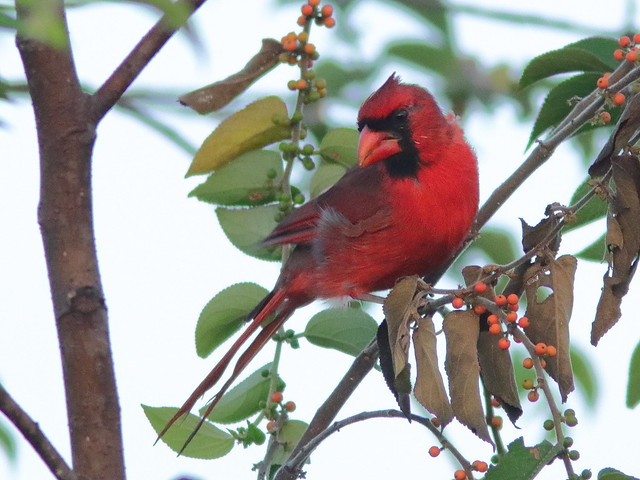 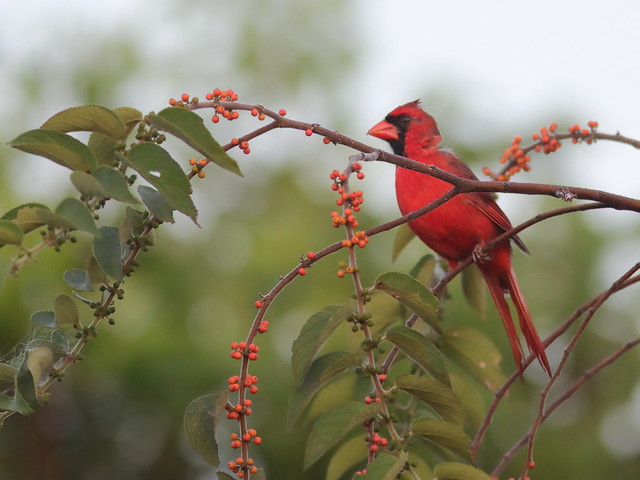 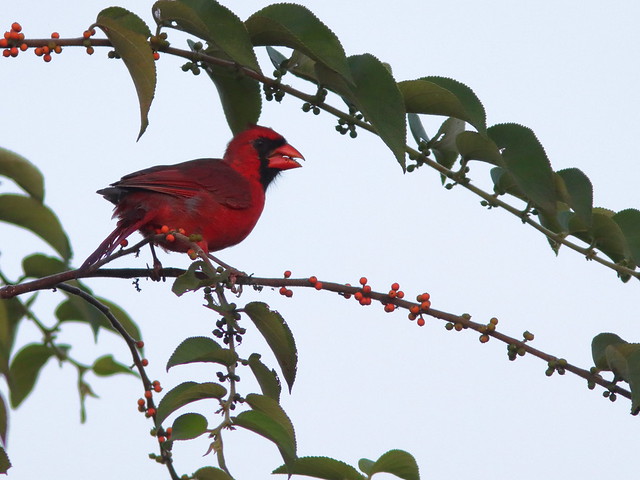 I wondered why one of my favorite warbler spots was so quiet. Blue Jays were calling from hidden perches in the area. Then this Cooper's Hawk flew in from an adjacent tree. This species is a "true hawk" ( Accipiter) with compact body, short wings and long tail suited for chasing smaller birds through the branches: 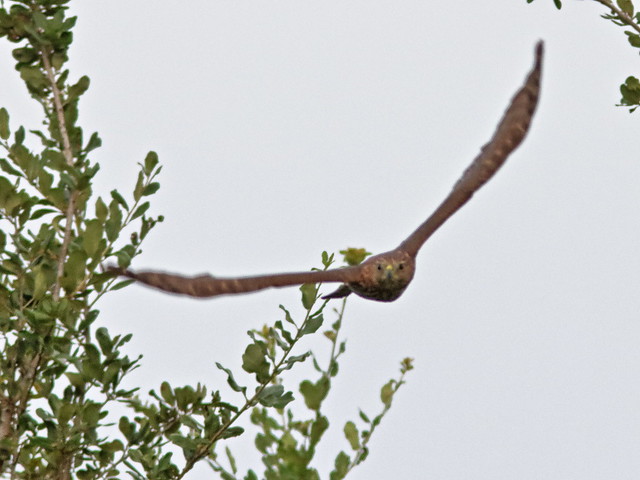 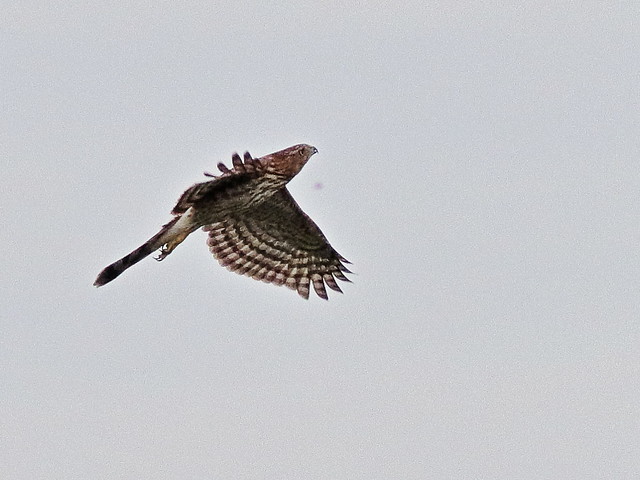 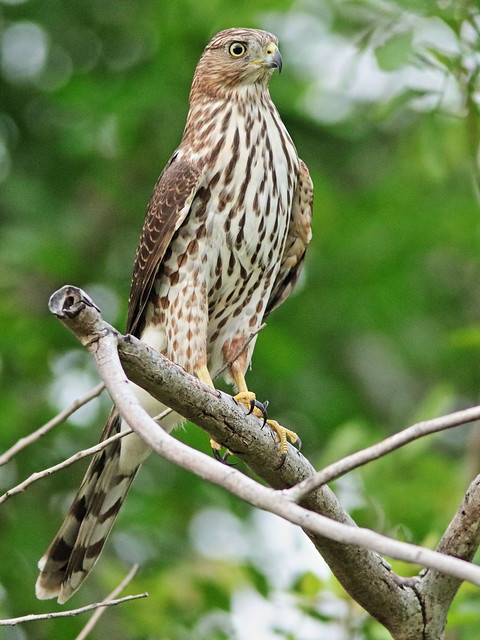 The hawk took off, but patrolled the area and returned several times: 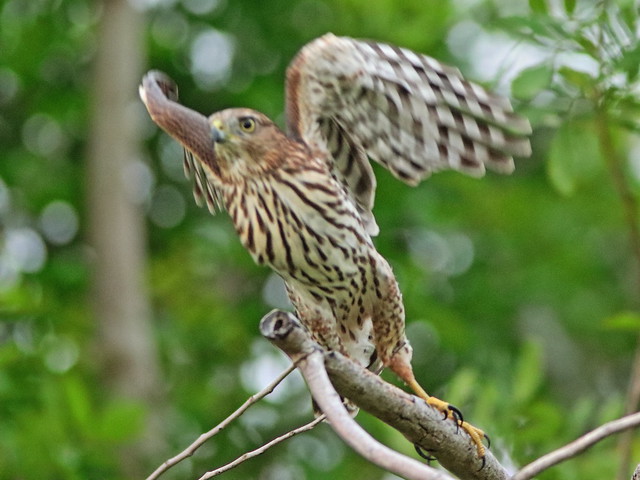 Spotted Sandpipers are returning. In spring and summer they have spotted breasts, like this "early bird" on July 11: 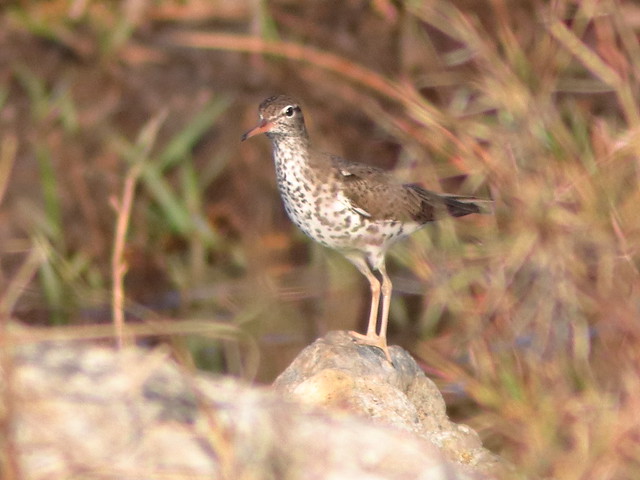 Adults like this one photographed on September 3, have clear breasts in fall and winter: 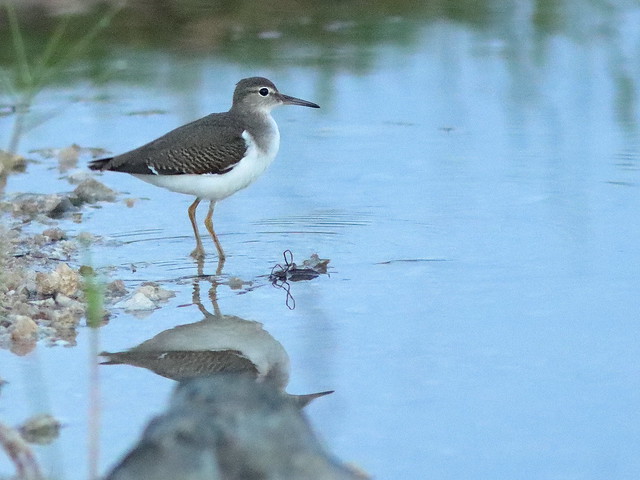 African dust lingered in the atmosphere just before sunrise on August 31, showcasing the dark shadows cast by cloud tops over the Atlantic Ocean. I followed the emerging solar (crepuscular) beams... 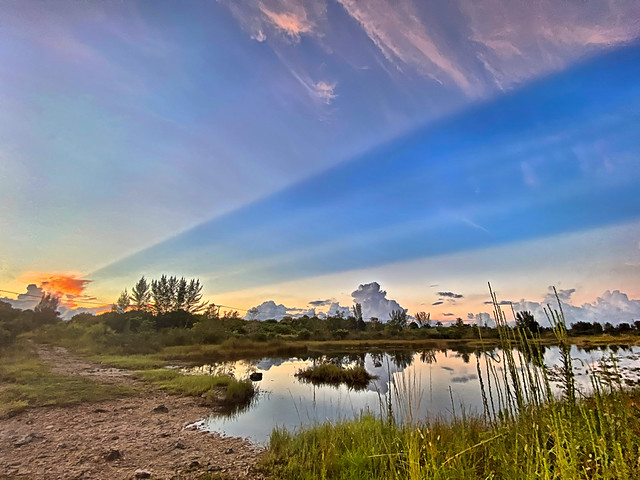 ...across the southern horizon. Though straight as an arrow, they seemed to curve down opposite the Sun... 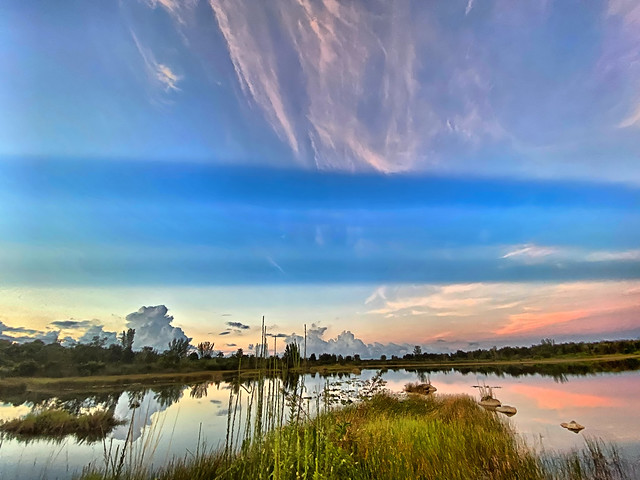 ...appearing to cluster with other cloud shadows as an anti-solar (anticrepuscular) mirrored "sunrise:" 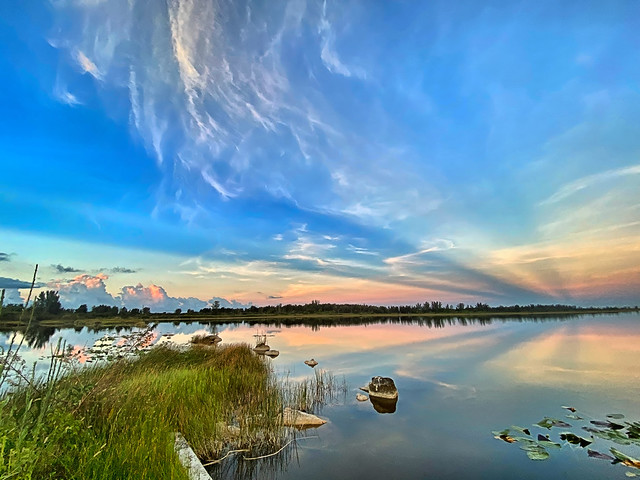 *Florida Trema (Trema micrantha) is a shrub or small tree up to 10 m tall. It is grouped with Hackberry and Hemp in Tree Family CANNABACEAE.  Leaves are egg-shaped, up to 9 cm long, green on top but covered with white, woolly pubescence underneath. Flowers are greenish-white. Fruits are yellow to bright reddish-orange, up to 4 mm in diameter.

Kenneth Cole Schneider
Virtual New Mexican, lives in Conneticut and remembers growing up, birding and practicing medicine in New Jersey, finds birds and beauty close to home. A lifelong birder and retired physician, I grew up and began my practice in New Jersey. After my career in the US Public Health Service, my wife Mary Lou and I retired to the mountains of New Mexico, where we led bird walks at Rio Grande Nature Center and the US Forest Service. The cooperative rosy-finch feeding project we initiated at Sandia Crest has developed into a major banding and research program. In 2004 we moved to South Florida, where we worked to create a Bald Eagle sanctuary to protect this species' first active nest in Broward County since before DDT was banned. In 2021 we moved to Glastonbury, Connecticut. I took up photography in 2008 and enjoy finding beauty in birds and nature close to home. Read more here