The eagles have landed, but...

There is drama at the local Bald Eagle nest. I have been observing the nest since it was "discovered" back in 2007. Over the years, the same male "Pride" has fathered 27 known eaglets, of which all but eight survived to fly freely. Pride's first mate was Joy, who disappeared just before the 2014-2015 breeding season after producing the first 13 eaglets, of which only two did not survive to fledge.

Pride then paired up with Jewel in December, 2014 but it was either too late in the season, or she may have been too young to breed.  However Jewel went on to hatch out 14 more eaglets. As of now she has lost 6 of them. Two (and probably their newly hatched unseen nestmates) were assumed to have been killed in 2016 and 2020 when early spring storms disrupted the nest. In both seasons the pair went on to raise second broods of two eaglets. They lost one of these to unknown causes in 2016, but successfully raised both in 2020.

Those two youngsters hatched 2-3 months later than usual. In normal years they would have fledged in April or May, but these two were dependent upon their parents well into late summer. This probably delayed the start of the 2020-2021 breeding season, which usually begins around October 1. The pair worked to build a new nest in a very precarious location, high in a limber Australian Pine with only two major supporting limbs.

Eggs are normally deposited by early December and hatch in early to mid-January. Instead, their first egg was laid around February 1, 2021 and two eaglets hatched around March 7-12th. Normally the eaglets fledge at about 10 weeks of age.  A severe thunderstorm on April 11 damaged the flimsy nest and a week later the younger eaglet fell to the ground. The older sibling fell on April 28 and was recovered after 5 days of searching.

Both eaglets suffered broken bones, but the injuries to the younger bird (P Piney 27) were more serious and eventually fatal, while the older sibling (P Piney 26, a male) was successfully rehabilitated and released to the wild on June 14. It was sad to see Jewel visit the site of the demolished nest several times during the summer. Suddenly Pride showed up and joined her on  Freed from the burden of rearing any eaglets, they instituted courtship and began rebuilding the failed nest.

On September 11. Pride occupied a dead branch near the site of the original (old) nest, about 100 yards away: 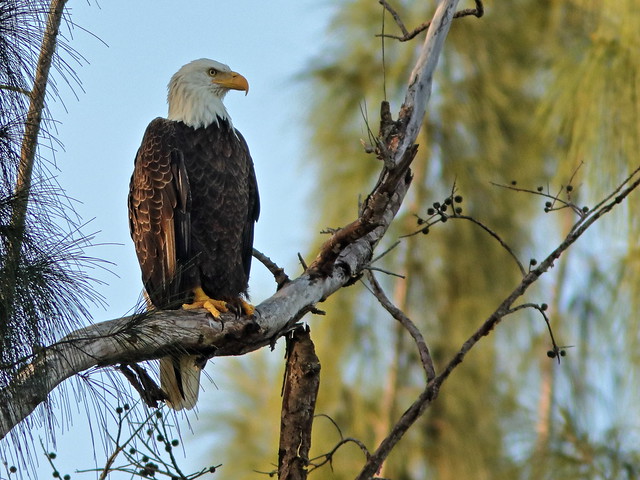 Jewel was roosting above the remains of the failed nest. This was not a good omen. Some researchers report that the female more frequently chooses the nest site. Her position corresponded to the placement of the main nest platform (bole). The empty space under her had been occupied by nesting material which collapsed during the storm and began the process resulting in the grounding of both eaglets: 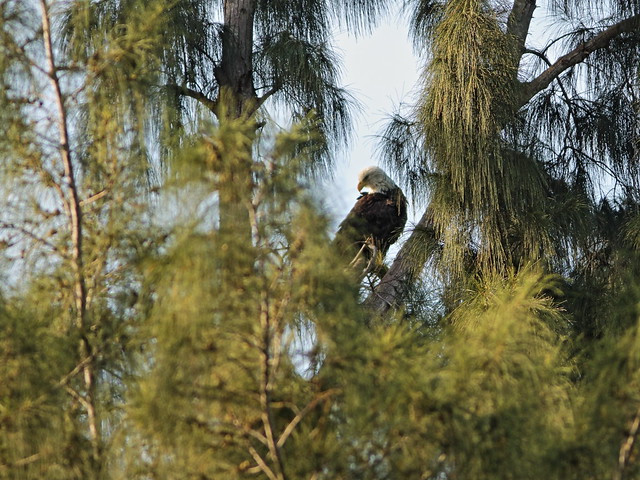 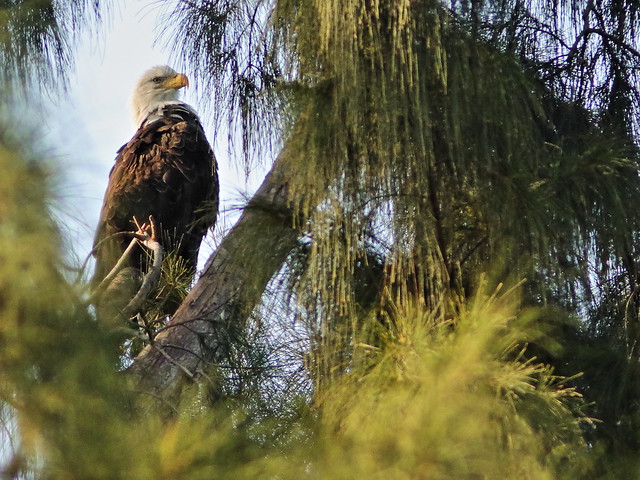 The next day, both adults were carrying sticks and exhibiting courtship behavior with copulation attempts. On the morning of September 14 the eagle watchers saw Jewel fly into a tree and attempt to break off a large dead branch. It would not budge... 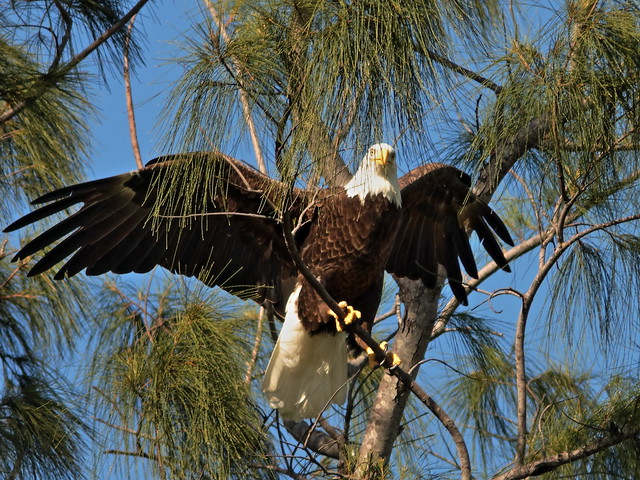 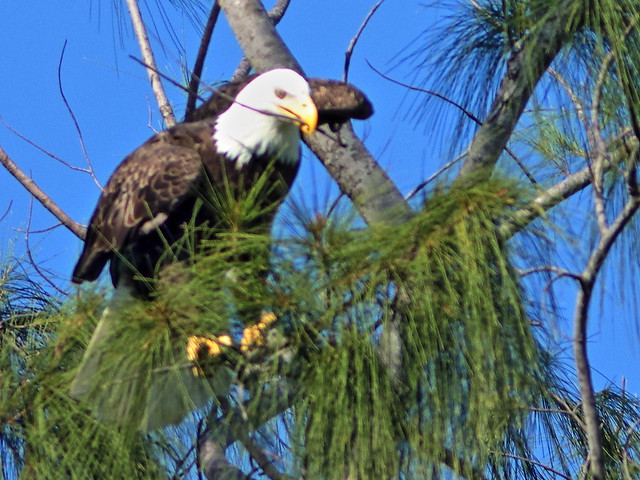 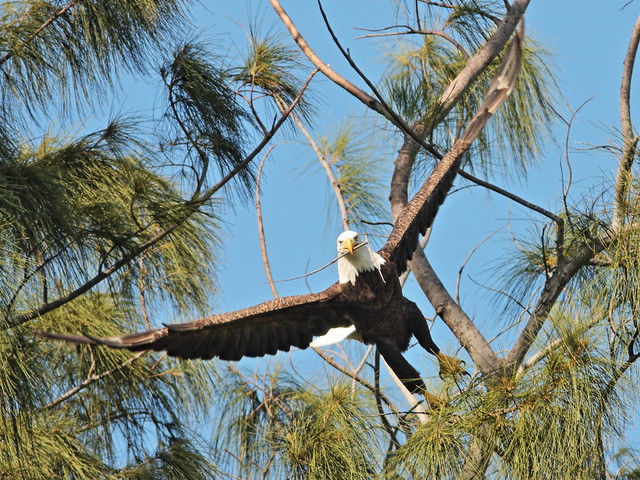 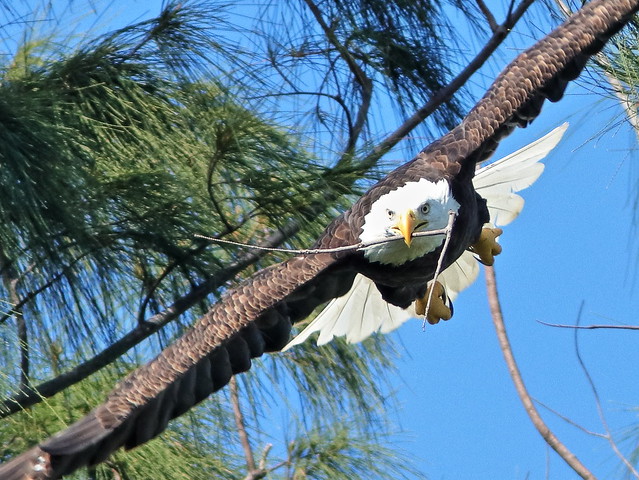 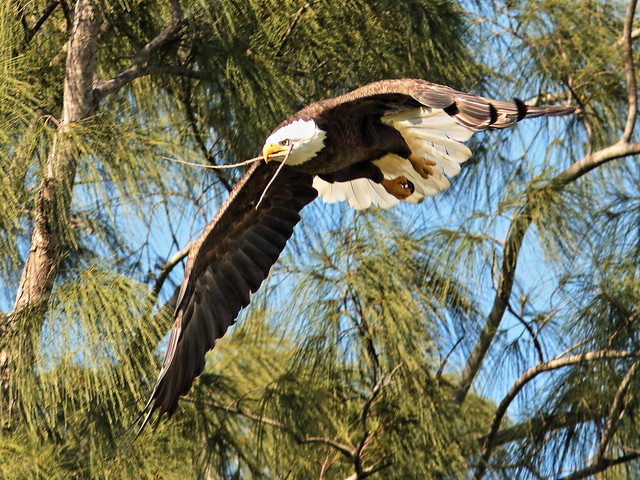 ...and added it to the sparse material already deposited in their restorative effort: 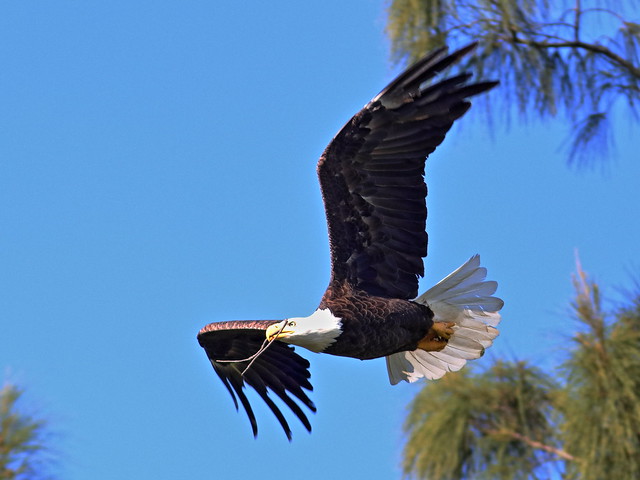 Some of the structure of the failed nest is still lodged below its original site. The nest was placed between the main trunk and a single side branch. We are not very optimistic about their chances this breeding season: 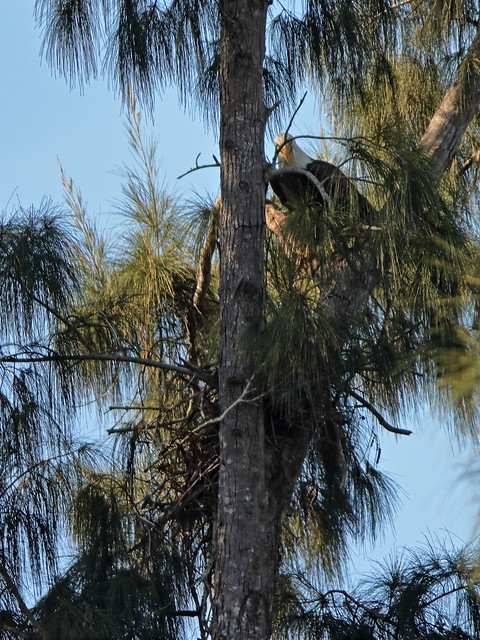 She then roosted nearby and Pride flew in to join her. They perched shoulder-to-shoulder. Jewel is to the left in these photos. Note her very long rear talon (hallux), a distinguishing characteristic of the female: 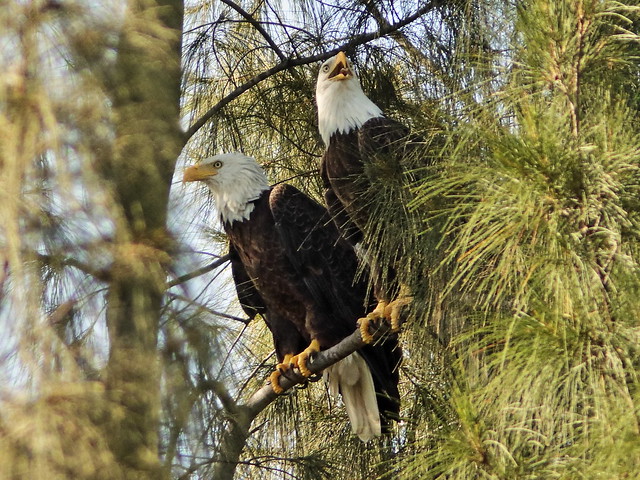 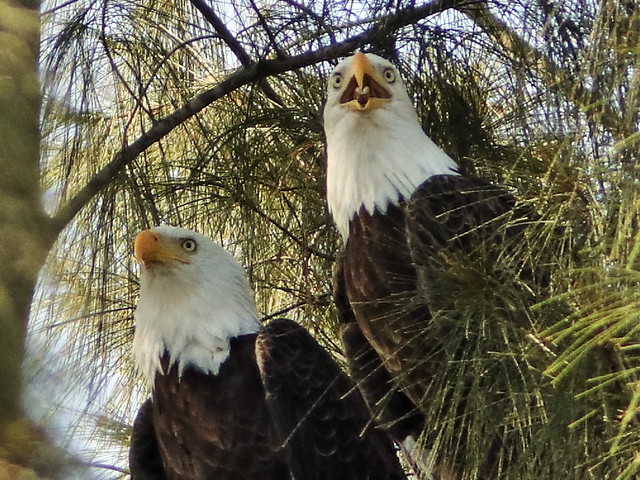 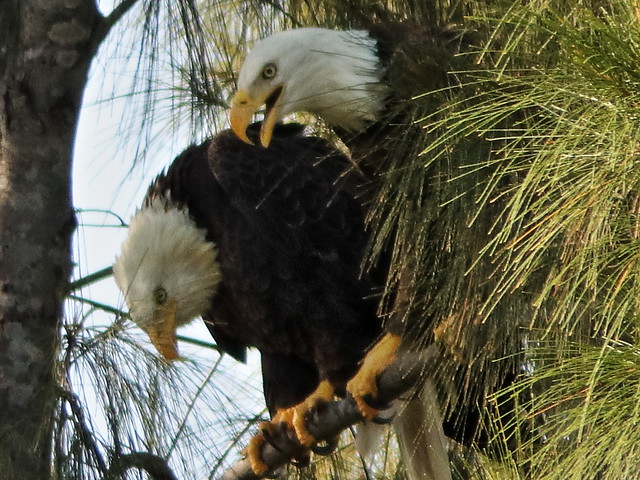 Both called together. Their fixed fierce facial expressions made the lovers' interaction look more like a hostile encounter: 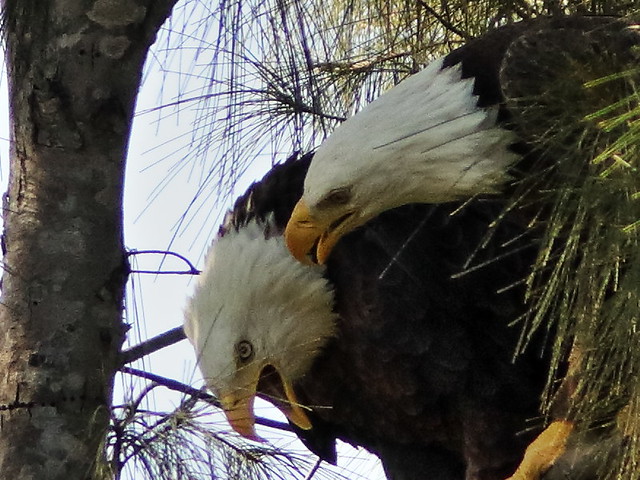 Fall migration is getting off to a slow start. Prairie Warblers have migrated "sideways" from their coastal breeding habitat: 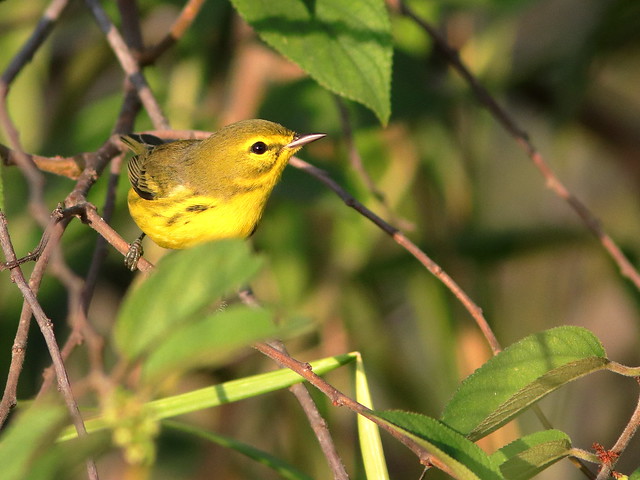 An Ovenbird foraged in the damp leaf litter: 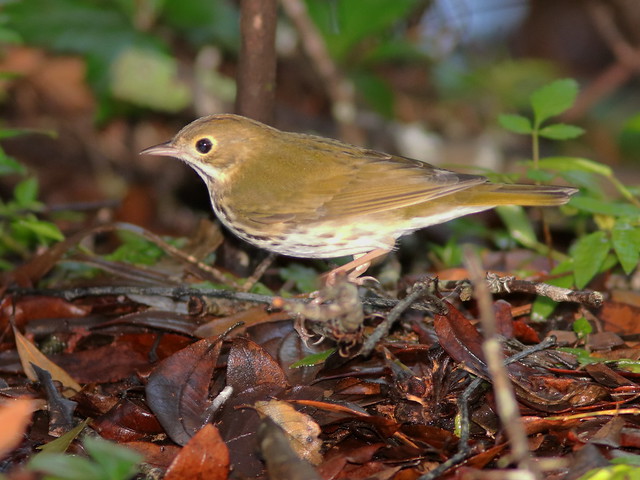 Blue-gray Gnatcatchers flitted about actively, in search of insects: 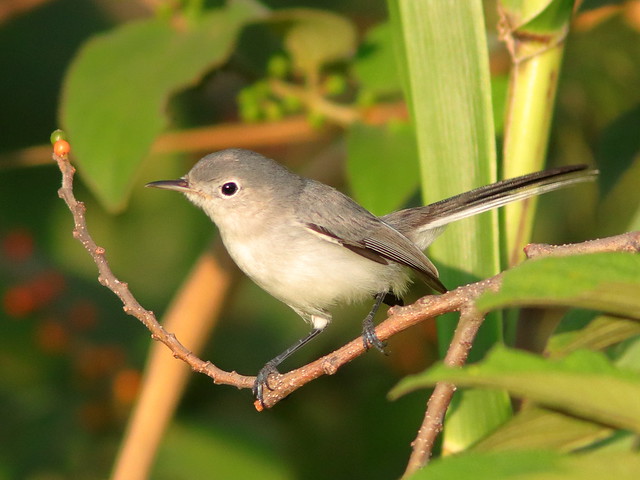 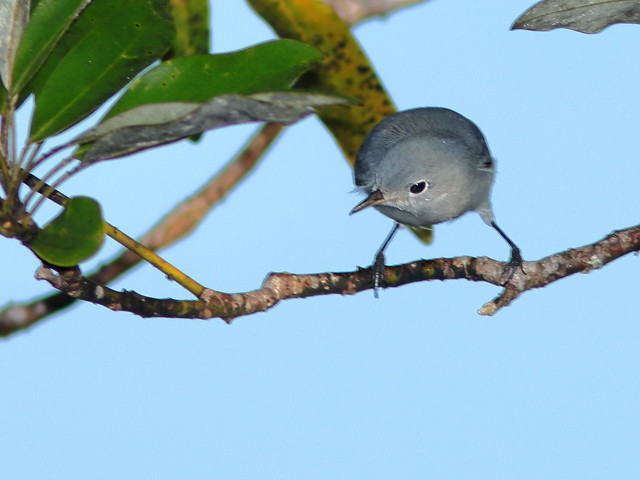 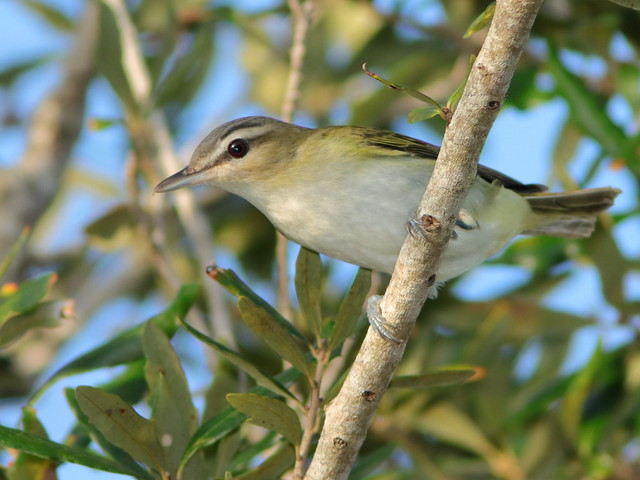 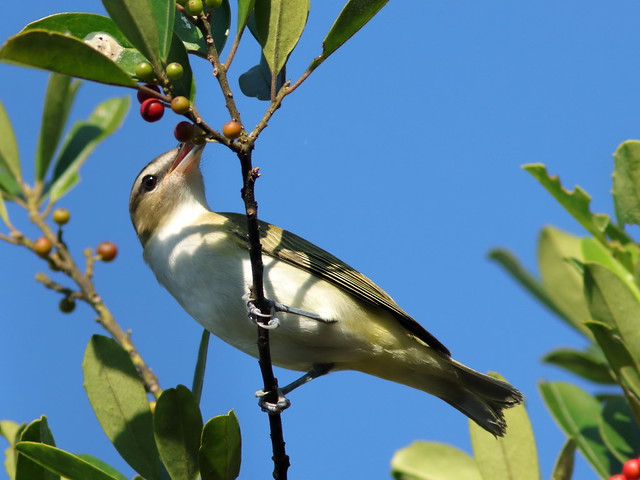 A distant Coyote crossed the path: 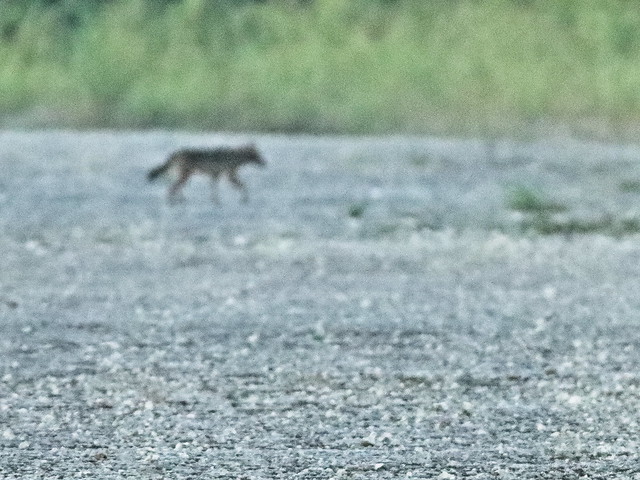 The Coyote's track was imprinted in moist sand. The smaller rear paw print is to the left of its front print: 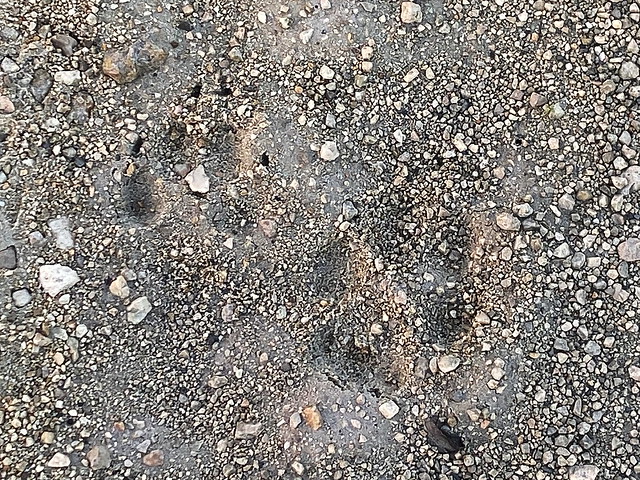 True to its name, a Halloween Pennant perched like a flag atop a tall stalk: 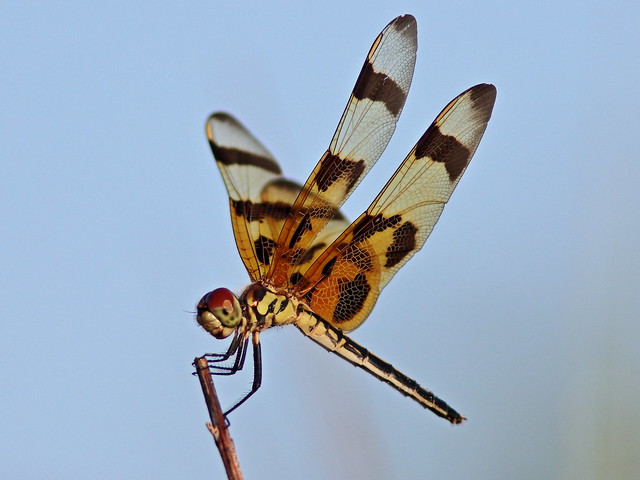 Just after sunrise, clouds reflected on the still surface of the lake: 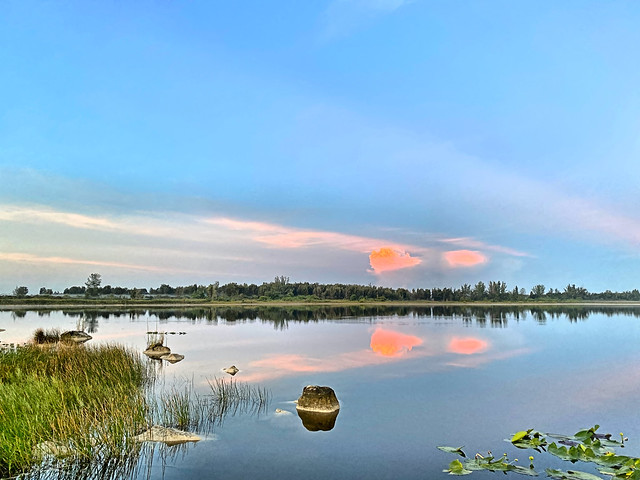