The early morning hours are special. Many nocturnal birds are especially active until about a half hour before sunrise. Birding by ear, I can sometimes pick up the calls of  Great Horned and Barn Owls I have rarely had photo opportunities with these species.  Eastern Screech-Owls are easier to encounter and sometimes pose out in the open even as sunrise approaches.

Last year this one even dozed off as I clicked away in natural light: 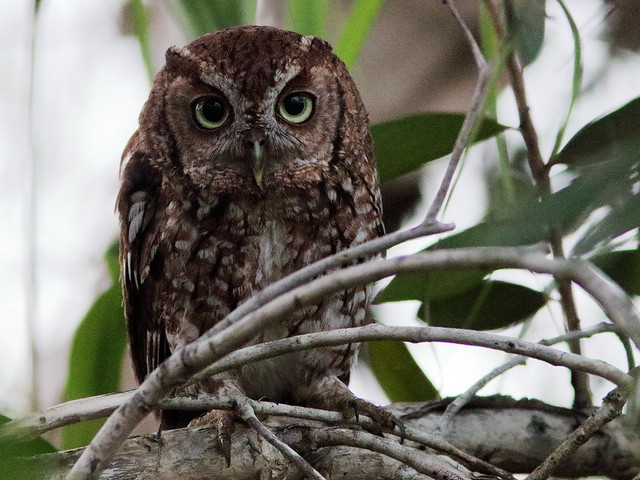 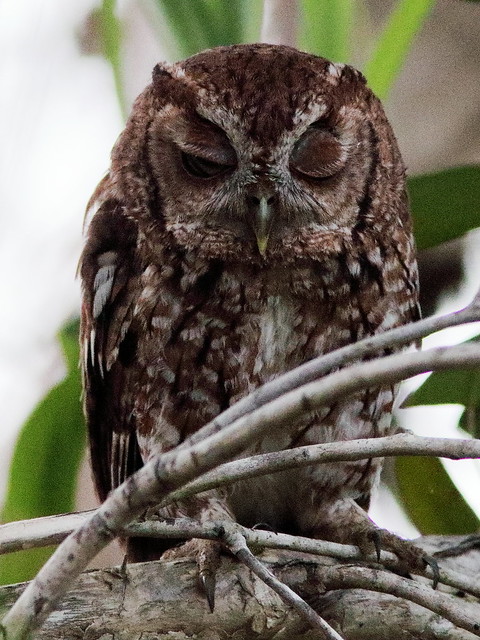 Although early morning photos lack feather detail and accurate color rendition, I like the mood they can portray, as in this serene pose of an immature Little Blue Heron which flew in about 20 minutes before sunrise: 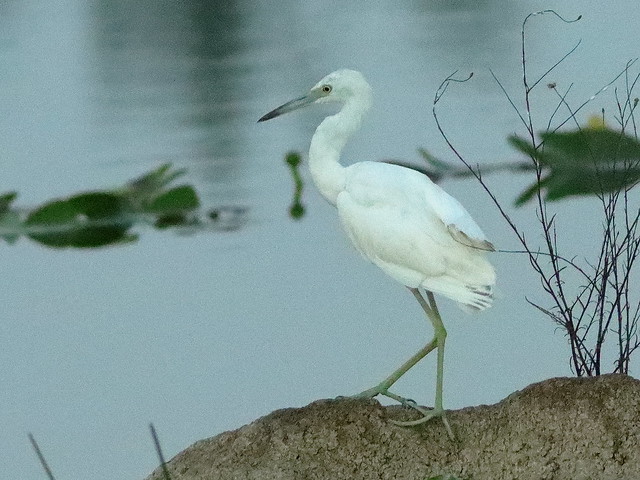 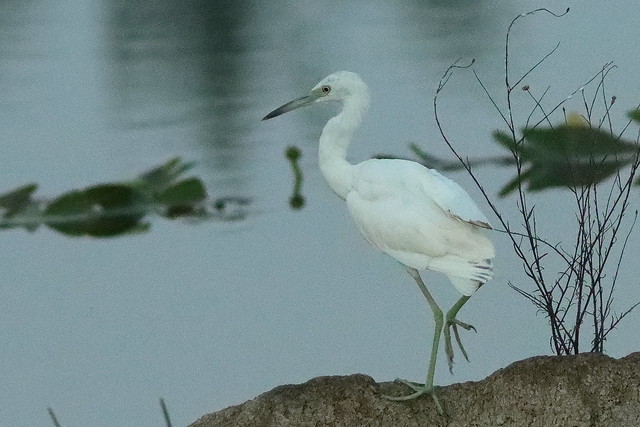 An adult of the same species flew in a few seconds later. Its dark plumage almost melted into the background: 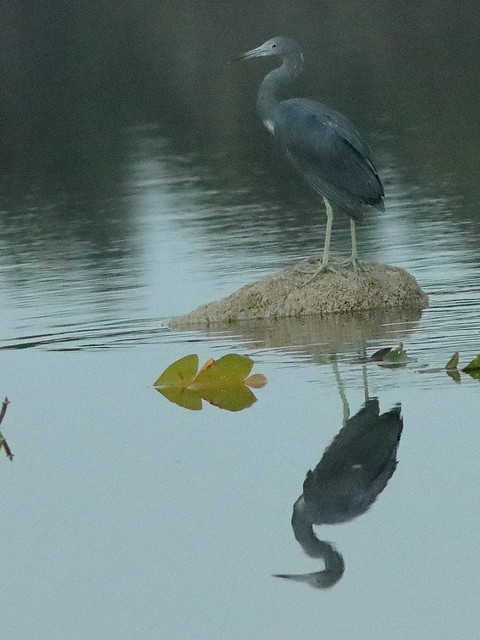 As the adult Little Blue Heron flew off,  I could barely see it against the dark background and actually focused on its reflection: 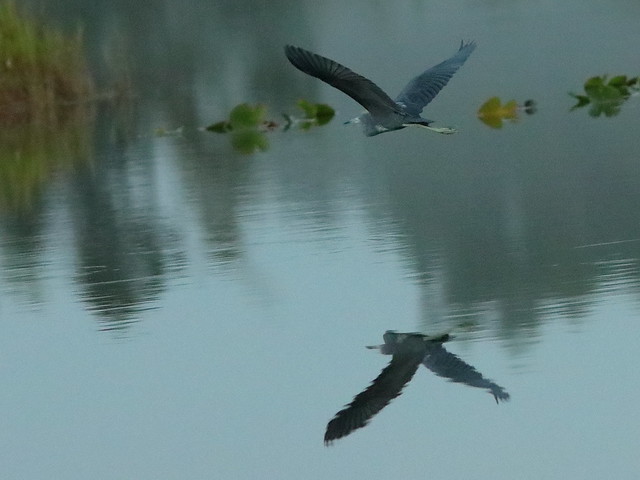 A Great Egret was easier to see in the darkness: 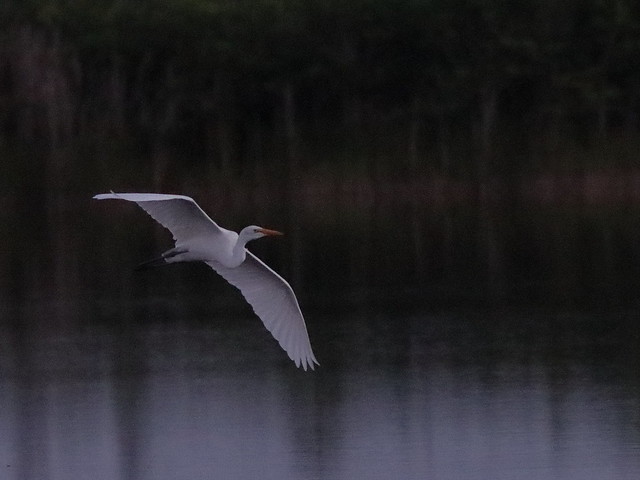 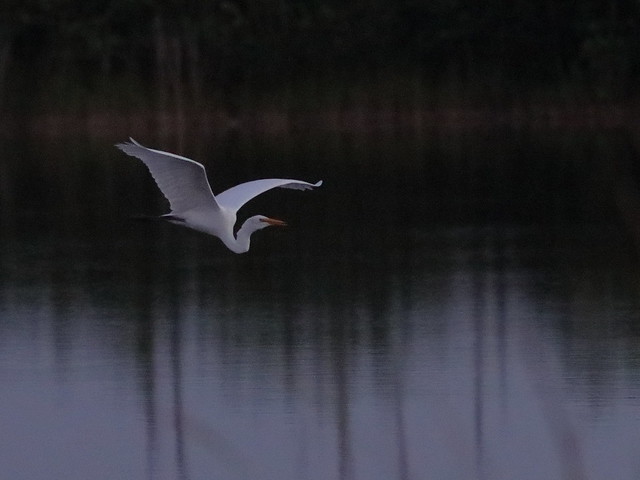 Cameras can sometimes seem to "see" in the dark. This distant White-tailed Buck was invisible until he moved. Although binoculars provided a brighter view, he was barely visible through the camera's viewfinder. The camera tries to make up for the darkness by opening its aperture and slowing down the exposure rate. This results in a washed-out image in the RAW photo. Editing the image to darken (decrease exposure compensation) and sharpen it improved the image somewhat : 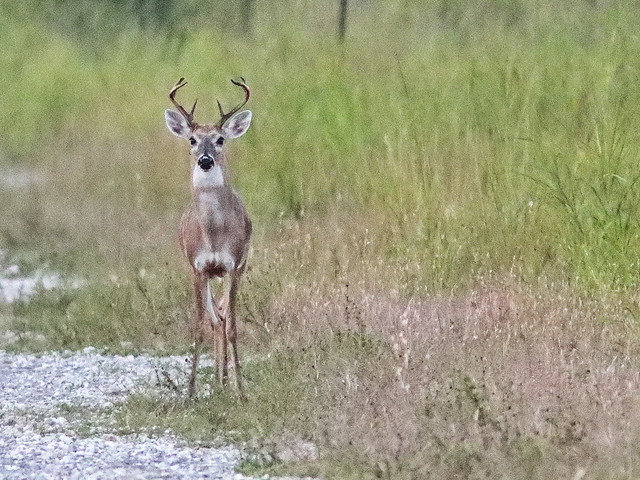 A little later, another buck suddenly walked out into the sunlight. Its antlers had only four points. 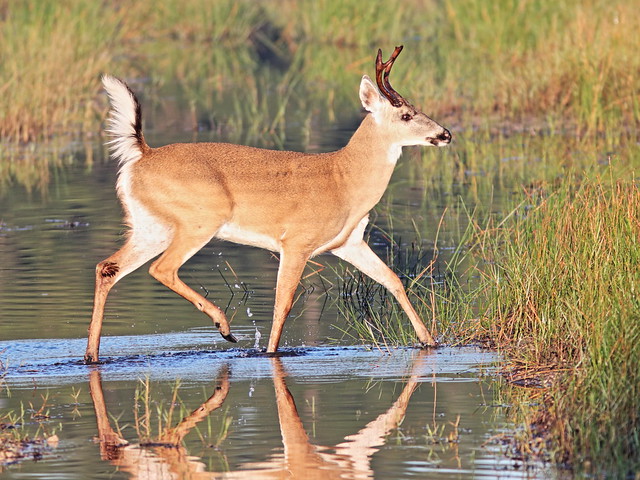 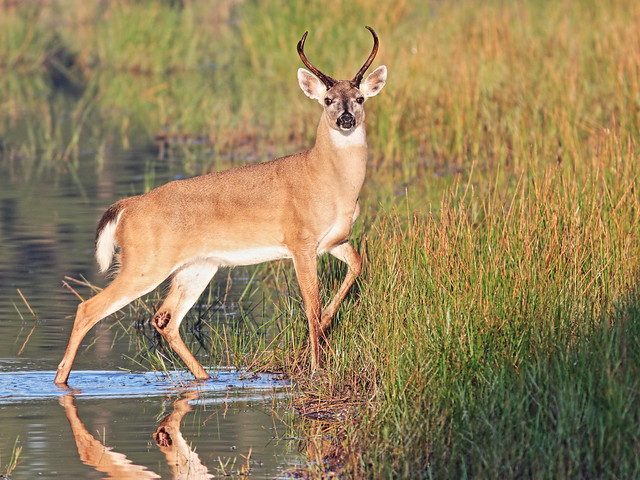 Detail of that dark spot inside its rear leg. It is one of the several scent glands. The deer can voluntarily flare the hairs surrounding the tarsal gland. 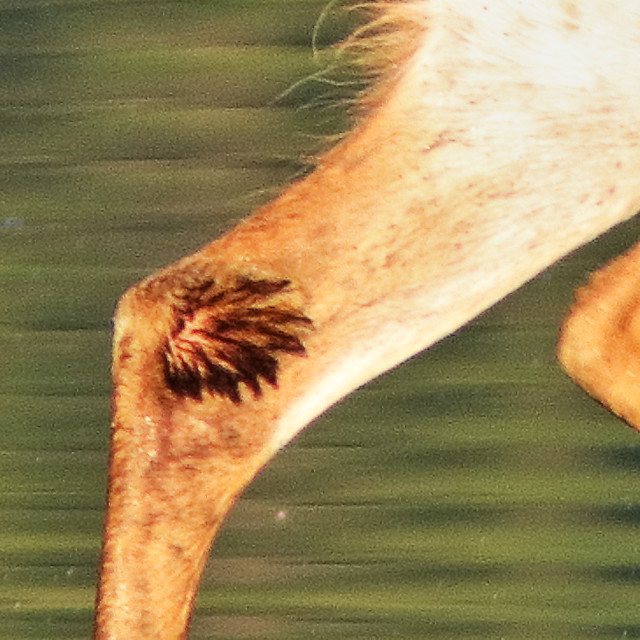 Factoid: Making sense of whitetails scent glands:  The tarsal gland is a pad of stiff hairs located on the inside of each deer’s rear leg at the hock. At the base of each hair is a fat, or sebaceous, gland that produces an odorless oily deposit that coats the hair creating a stage for scent dissemination. All year through, deer can flare their tarsals. Scent is released by flaring the tarsal hairs into a rosette. Whitetail deer of all ages, urinate over their tarsals (rub-urinate) throughout the year, bucks more so during the rut. Fawns may rub-urinate to locate their mother.

Early morning light cast long shadows which broke up the profile of this female Northern Cardinal: 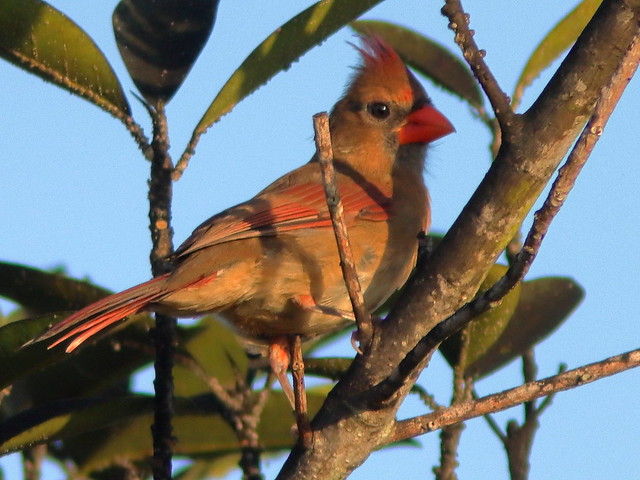 A male Northern Cardinal was eating the Trema berries: 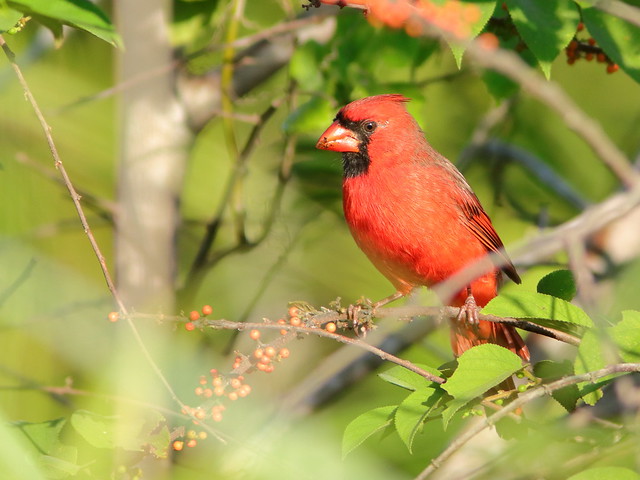 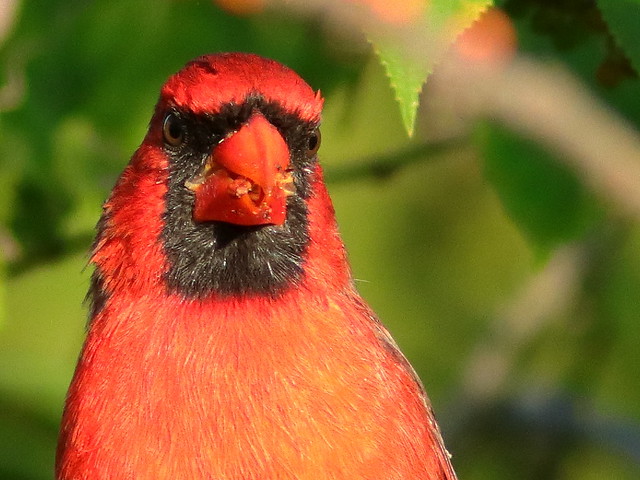 In our back yard, a female Anhinga was joined by a Little Blue Heron. They lounged together amicably: 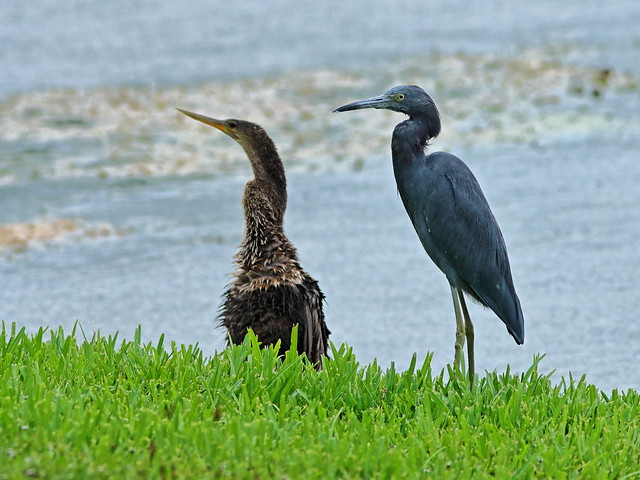 Or, did they just disagree about something? 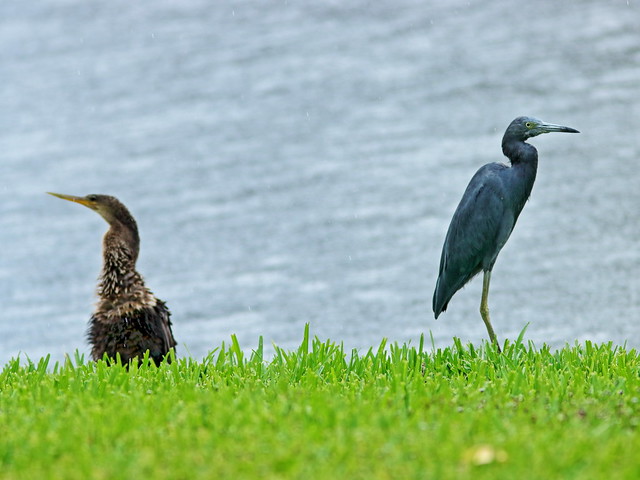 An hour before sunrise on the last day of summer, the Full Harvest Moon was over the horizon as we walked into the Wounded Wetlands: 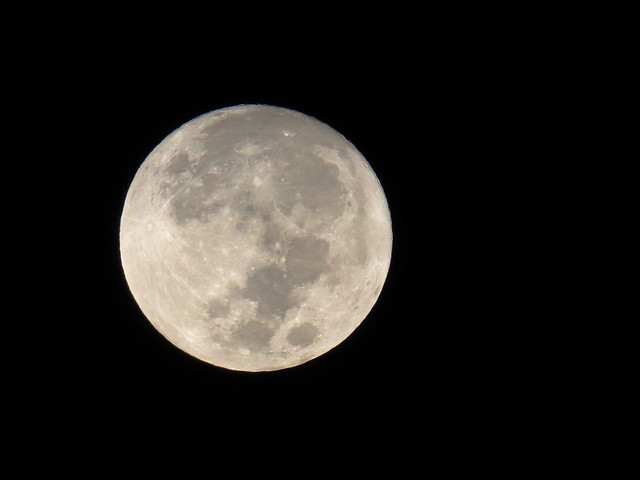 We had hoped to see it set over the lake but low clouds intervened: 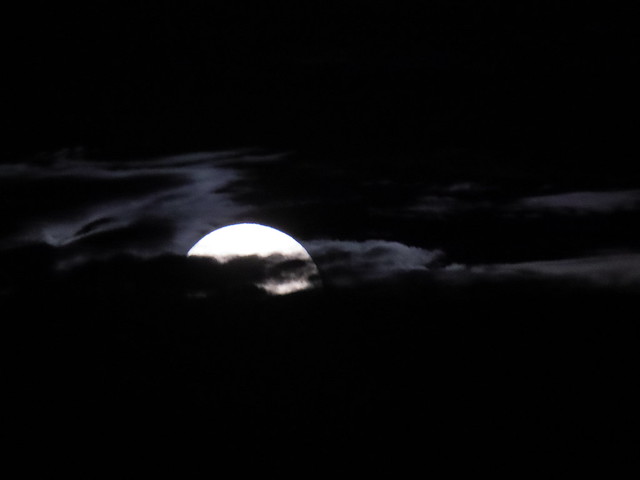 Golden sunrise over the gravel road which leads to the lake: 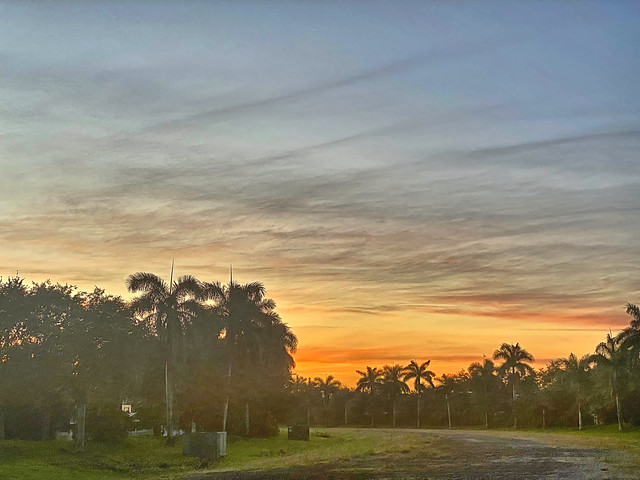 Early morning view of the lake in the Wounded Wetlands: 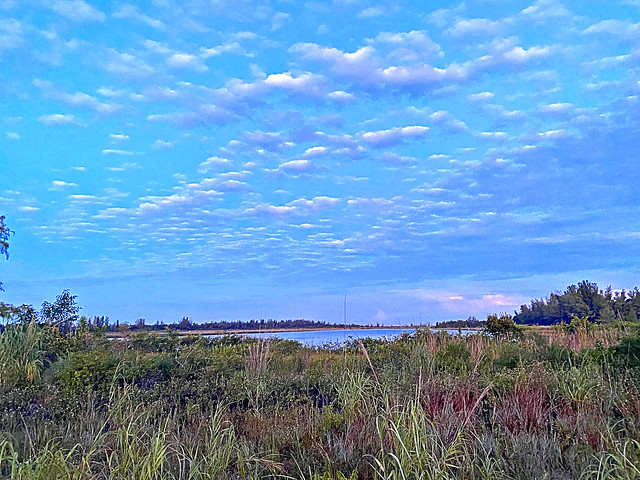 I started Rosyfinch Ramblings on September 15, 2006, so this is my 15th  Blogaversary!